With the growing popularity of blockchain solutions such as Hyperledger Fabric, the ability to quickly stand up customized networks to solve specific business problems is increasing. The currently available provisioning examples generally focus on provisioning a network on a single virtual machine, creating overly simplistic network configurations that may not reflect actual performance on a distributed network.

At IBM Research – Ireland, we have built a set of open source provisioning examples, available on GitHub, that allow you to quickly:

These provisioning examples are built for general application and are business-domain agnostic. They are designed to make it easier to get a distributed network up and running faster, supporting blockchain architects, system administrators, and senior developers charged with setting up Hyperledger Fabric networks.

Providing persistent network and flexibility in customizing a blockchain network

The design ethos behind these examples is that everything is built with a conservative bias toward provisioning a network. Each participating organization provides their copy of the components to run a Hyperledger Fabric network (meaning it doesn’t rely on another organization to provide essential components, such as identity). In this design, each organization provides its own Zookeeper, Kafka, peer, orderer, and fabric-ca nodes.

You can find examples of provisioning a Hyperledger Fabric network on GitHub. These two examples cover the simple case of a single peer and solo orderer, and then a fully distributed and more robust Fabric network.

The first example shows you how to bring up the most minimal functioning Fabric network: a single peer and a single solo orderer. The purpose of this example is to expose and highlight the artifacts (correct certificates, YAML config files, and environment variables) required to have a working peer and orderer.

This is in the ./single directory in our GitHub repository.

This first example equips you with:

Perhaps most importantly, this first example shows the minimum requirements (in terms of configuration files, environment variables, and certificates) that are required for a functioning peer and orderer. All of this is contained in a single shell script that is intentionally simplified while also being intentionally verbose, in the hopes of adding clarity to the provisioning process.

The second example is much more involved. It uses Ansible to create three or more organisations, where each organisation consists of a Zookeeper node, a Kafka node, a fabric-ca node, an orderer node, N peer nodes, and a client node. Each node corresponds to its own virtual machine. You will find this example in the ./ansible directory in the GitHub repository. 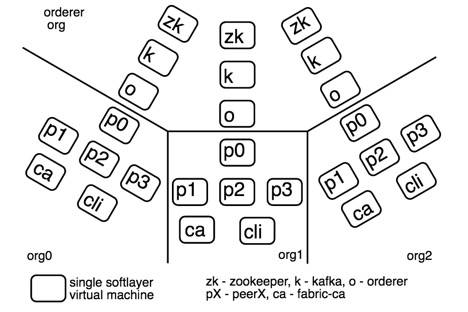 Using the template of the first example, the second example creates a fully distributed and more robust Hyperledger Fabric network. This is created for a user-defined number of organisations and peers per organisation. It generates the necessary config files automatically. Since setting up this kind of network would be a tedious and error-prone process if done manually, an Ansible playbook is provided, addressing the numerous roles required for the network.

Next steps: Try it

Try our set of provisioning examples out and give us your feedback. Our hope is that these examples will prove educational and beneficial to the broad Hyperledger Fabric community.