Learn about test-driven development and see it in action

What is test-driven development?

In TDD, you write your unit test first, watch it fail, and then implement code changes until the test passes. Sounds backwards, right? But the code you produce when you use this testing methodology is cleaner and less prone to breaking in the long run.

A unit test is simply a test that covers a small portion of logic, like an algorithm, for example. Unit tests should be deterministic. When I say “deterministic” I mean that unit tests should never have side-effects like calls to external APIs that deliver random or changing data. Instead, you’d use mock data in place of data that could potentially change over time.

There are 5 steps in the TDD flow:

Figure 1 shows these steps and their agile, cyclical, and iterative nature: 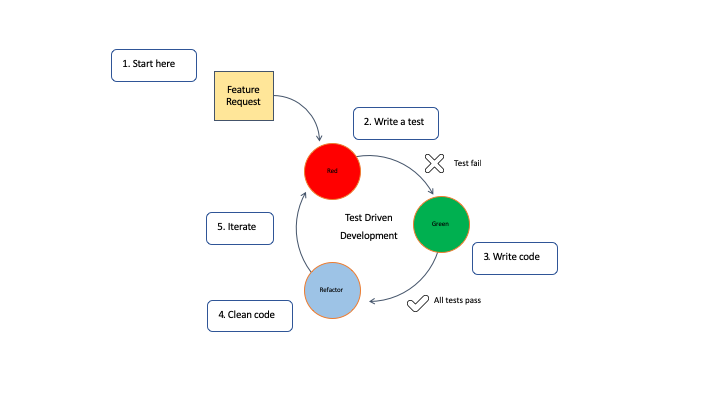 This workflow is sometimes called Red-Green-Refactoring, which comes from the status of the tests within the cycle.

Continuous integration(CI) is a development practice that requires developers to integrate code into a shared repository several times a day. Each check-in is then verified by an automated build, allowing teams to detect problems early. By integrating regularly, you can detect errors quickly, and locate them more easily.

The tests are run in the deployment pipeline. If all tests pass, integration and deployment will happen. On the other hand, if any tests fail, the process is halted, thus ensuring the build is not broken.

Set up your tools, toolchain, and IDE first

In order to do test-driven development, you need to setup your tools, toolchain, and IDE first. In our [code pattern], we are developing a Node.js example, so here are the key tools we set up:

How to write unit tests that fail

There are a couple different ways to write unit tests that fail.

The test will now pass (Green!). The code is obviously just a sub for now, but you can get the basic understanding. The test is wired up to a point in the code correctly. From there you can implement actual business logic, for example, read a file/db/call an external API.

Deciding when to write unit tests

In general, there are two cases for when you’d write unit tests:

Case B: A piece of buggy code in production breaks. This bug triggers an issue that requires a fix/patch to be implemented. Returning to the currency exchange example, the code, when run manually, the user expects that $USD are used in many countries but the behavior is wrong, only one country returns.

The first thing I do is write a unit test and see it fail. Then, I correct my implementation code until the test passes. Not only does this fix the code and remove the bug, but it also gives me a unit test that I can use repeatedly to ensure this piece of code remains integrous.

Stay tuned for new blog posts for how to do test-driven development in Node.js, Java, and Python.