The IBM Systems Director Active Energy Manager (AEM) is a tool for monitoring and managing power and thermal usage across systems and facilities within a data center. AEM is included with IBM Systems Director editions or available as a plug-in option for IBM Systems Director. REST application programming interfaces are recent additions to both products. They are included in release 6.1.2 of IBM Systems Director and release 4.2 AEM; both were released in December 2009. This article will take you through the journey I took as product tester: from understanding the basic concepts of REST and RESTful programming, continuing with writing a simple program, and finishing with developing a moderately complex AEM application. The only assumption I make of the reader is a basic understanding of Java programming and the hypertext transfer protocol (HTTP).

My first task was to discover REST. After researching the web, and talking with my colleagues, I summarized it as follows: REST (Representation State Transfer) stems from a Ph.D. dissertation by Roy Fielding in 2000. In its essence, it is a type of web service. It refers to a stateless client/server architecture where the web services are viewed as resources that can be identified by their Uniform Resource Identifiers (URIs). These services are limited to the standard GET, POST, PUT, and DELETE HTTP methods. Software developed using this architecture is considered to be RESTful.

In its basic form, a REST API is a URI that can perform a single operation. For AEM, URIs are available to obtain energy metrics and to set energy management functions. For example, this URI, /IBM/director/rest/resources/PowerOutletGroup, will return a resource that contains the list of power outlet groups.

REST APIs are programming language independent. They are accessible from any language that has a HTTP client library, including Java, Python, Perl, and so on. I chose Java mainly because I am most familiar with it. The information center for IBM Systems Director Software Development Kit (SD) is the place to start for detailed information regarding the APIs. In addition to all the detailed syntax information, it contains a samples section, which includes a number of useful Java methods. I took advantage of the REST Utilities.java class, using the methods for getting the response string and for logging.

There are numerous articles available on the web, but one that stood out for me (for both its simplicity and creativity) was written in 2004 by Ryan Tamiko entitled “How I explained REST to my wife” (see the Related topics).

Once I had a basic understanding of the REST concepts, my next task was to figure out how to put that knowledge to work in the Java programming world. What works well for me is to find a fairly simple application and build from there.

For this task I selected the REST client application from the Agile commons.org website. With a few modifications for handling the Secure Socket Layer (SSL) certification and parsing JSON formatted resources, I had a simple, straightforward Java application running in a matter of days.

One of the drawbacks to using Java in this environment, as opposed to Perl or Python, is that if you are running remotely on a system other than the one where the Systems Director server resides, you first need to import the SSL certificate into a local trust store to make secure HTTP connection using SSL. The IBM information center provides step-by-step instructions for acquiring the certificate.

The SSL modifications to REST client consisted of adding a few lines of code to input the location and password for the trusted store security certificate and the following lines to set the appropriate security properties:

Parsing JSON formatted resources requires the inclusion of JSON libraries. From the JSON.org Java website, I downloaded both the Java and HTML source files ran the following commands to create a JSON.jar library file.

Writing the code for parsing JSON is straightforward. The JSON libraries provide a full set of methods for parsing, selecting, and updating JSON resources, which can easily be incorporated into a general purpose application. As part of my learning curve, I added the following code segment to REST client. It simply creates a JSON object from the string data, which is the result of the GET call. Then, I output the object to see what the raw data looked like. Finally, I tested the parsing by checking to see if the object contained a cooling rate multiplier. If so, I output that value.

REST client is a callable from the command line on any client system that is able to connect to the Director server via the network.

For get and delete:

For put and post, sending the contents of a file as the body:

In summary, this simple application performs all the basic REST services of GET, POST, PUT, and DELETE, using input from both the command line and local files. It proved to be a nice stepping stone for developing a more complex application.

Before discussing the next application I want to mention a handy tool that makes the job of RESTful programming a lot easier. One of the nice features of REST is that you can exploit the APIs a number of ways including through a web browser. I found using a Firefox web browser (version 3.5.8), updated with the JSONView addon proved to be a useful tool for application development (see Related topics).

You bring up your Firefox web browser and enter the URI. The first time you will be prompted to enter your Systems Director user ID and password. The results are shown in the browser similar to how XML documents are shown. The resource is formatted and highlighted, and arrays and objects can be collapsed.

Figure 1. The following is a sample of the formatted JSON output from REST request for AEM supported resource groups 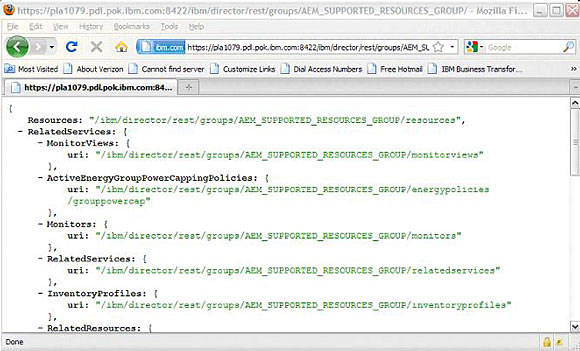 What’s nice is that you can see the resource produced by the URI without having to write a line of code. I used it extensively when writing the next application; it saved a lot of time.

AEMpwrReport is designed to be a more complex application, one that a customer would consider writing to extract usable data from AEM. It polls the Director server using REST APIs at regular intervals, for a specified duration, and collects input power data for all AEM monitored endpoints. Before completion, it outputs aggregate data for the individual end points, as well as summary information for all monitored endpoints. The user is able to control both the polling interval and the duration of the execution. There is also a tracing facility which allows the user the capability of seeing the result of every call that returned unique power data.

From a REST perspective, this application is pretty simple. It consists of a single innvocation of the following URI, which produces a single resource containing all the input power data for every AEM monitored endpoint.

The challenge is to determine when and how often to get power data. The ideal solution would be to wait on a JAMS message, or to query an indicator that indicates updated power data is available, and then perform the GET. Unfortunately, this capability is not available in the initial release of the APIs. The solution was to perform the GET at a user definable interval after each GET checks all the endpoints. Check to see if the status flag for input power is set to “Valid”, and if so, then see if the time stamp has been update since the last update.

The following code shows how to parse the JSON resource and make the necessary checks:

As you can see AEMpwrReport is able to report power usage statistics for all managed endpoints. Also, the key thing to note is the time required for acquiring that data. You can see that I was able to acquire and process the data for 81 endpoints in a matter of seconds! Let’s see you do that with the GUI. Note that this time will vary based upon both the processing capability of the Systems Director server and the networking bandwidth available between the Systems Director server and client where AEMpwrReport is running.

In summary, learning the basics of RESTful programming does take a little time and effort even with a programming background. From start to finish, it took me a nearly a month before I felt proficient with both RESTful programming and the AEM REST APIs. However, once you have taken the time to master it, you can get the data you want, how you wanta it, and most importantly, when you want it.