DWARF (debugging with attributed record formats) is a debugging file format used by many compilers and debuggers to support source-level debugging. It is the format of debugging information within an object file. The DWARF description of a program is a tree structure where each node can have children or siblings. The nodes might represent types, variables, or functions.

DWARF uses a series of debugging information entries (DIEs) to define a low-level representation of a source program. Each debugging information entry consists of an identifying tag and a series of attributes. An entry or group of entries together, provides a description of a corresponding entity in the source program. The tag specifies the class to which an entry belongs and the attributes define the specific characteristics of the entry.

The different DWARF sections that make up the DWARF data are:

There are licensed tools, such as readelf, dwarfdump,_and_libdwarf available to read DWARF information. A script or program can read the output of these tools to find and interpret the required information. It is important to know tags and attribute definitions to write such scripts.

The following list shows the tags that are mostly of interest when debugging a C++ application.

The following command is used to compile a program in the DWARF format using the XLC compiler. 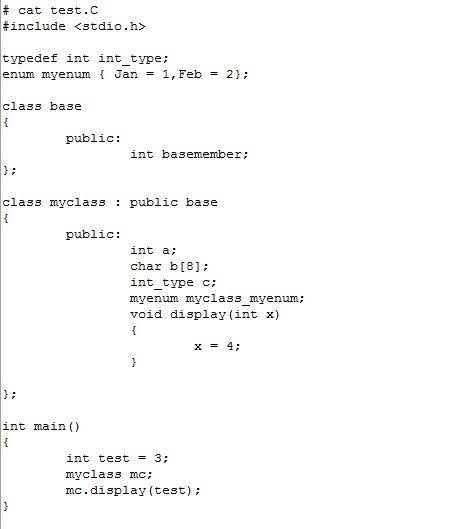 The dwarfdump output of the above example can be interpreted in the following way.

The .debug_abbrev section for DW_TAG_compile_unit looks as shown in Figure 2.

The DW_FORM_* attribute specifies the way to read DW_AT* in the.debug_infosection. In this case, DW_AT_name is of the form string. So the first attribute of DW_TAG_compile_unit has to be handled as a string in the .debug_info section, which is test.C.

From Figure 8, we can understand that there is a typedef entry named int_type and its type is at location <82>, which is int.