Create and manage multiple shells on your console

Harry Potter may have his wand, Thor may have Mjöllnir, and Buckethead may have his axe, but all those gizmos pale in power to the QWERTY. With a few taps at the command line, you can launch a Web site, recruit legions to your cause, or vanquish a marauding thunder lizard.

Alas, even the mighty QWERTY has a fatal weakness: It succumbs easily to a cut connection. A noisy phone line, a lost cellular or wireless connection, or a network time-out spells certain death for a remote shell. If you’ve spent hours on a task, such as debugging an application, it can be frustrating and maddening to lose your work in an instant.

But don’t smash Mjöllnir into your head. Instead, adopt GNU Screen. Screen creates and manages multiple shell windows within a console (say, a dumb terminal physically connected to the host), an xterm window, or a Secure Shell (SSH) login. You can switch from one shell window to another in a flash, and you can leave shells running perpetually and reconnect at any time. Effectively, Screen provides many virtualized consoles.

Figure 2 depicts state after you launch Screen on the remote host. The Screen utility launches and in turn spawns a new shell window, A, in which you can run commands. The output of A is visible, as connoted by blue; the output comes from the shell, traverses through Screen, goes through the remote login, and over the SSH connection, arriving at your local login.

Screen does not have a presence per se; it’s a proxy to select among the available and running windows it manages. Screen can only show the output of one window at a time. Think of Screen as a virtual keyboard-video-mouse (KVM) switch.

But you can also detach from Screen, as shown in Figure 3. The Screen proxy persists, as do all windows it controls, but the connection to Screen is temporarily severed, returning you to the prompt of your remote login shell.

Figure 3. You can detach from Screen and its windows persist

Figure 4 shows a possible, eventual scenario. The connection to Screen has been reestablished, and two additional windows — B and C — have been created. Windows A and B continue to run a shell and any subordinate jobs, yet only the output of C is visible. Of course, you can switch among the windows to monitor the state of your varied jobs.

Finally, Figure 5 captures conditions if you detach from Screen and terminate your remote login. Screen and its windows persist. You can log in anew, reconnect to Screen (and by proxy to its windows), and carry on unperturbed.

Figure 5. You can detach and reattach to Screen at will

If you regularly access a remote server to perform maintenance or develop software, GNU Screen is indispensable.

The original version of Screen was released more than 10 years ago, so chances are your system has the utility — typically named /usr/bin/screen. However, if your system lacks Screen, it is easily installed from your distribution’s package manager. For example, if you use a variant of Debian Linux®, such as Ubuntu, you can install Screen in one step with apt-get:

Alternatively, if you prefer to build from source, visit the GNU Screen project page (see Related topics for a link), and download the latest code bundle. As of this writing, the most recent release of Screen is version 4.0.3, posted just months ago, in August 2008. To build and install from scratch, download and extract the code, change to the resulting source directory, and run the typical ./configure, make, and sudo make install sequence:

Screen is now installed and ready to use. Type man screen to view the utility’s man page.

Getting started with Screen

To use Screen, just launch it. When the license message appears, click Return; you should now see a new login shell prompt. (In the transcripts below, a nickname has been artificially added before each shell prompt to differentiate between the numerous shell instances and to draw parallels with Figures 1 through 5.)

Your state now mirrors that of Figure 2. A Screen session is running (albeit unseen), and window A is active, running the top system monitor, which refreshes system performance information every few seconds.

The screen -list command shows all available screen sessions. (As an aside, you can have multiple screen sessions running simultaneously, each with its own set of concurrent windows. This is shown in Figure 6. Each screen instance tracks its own current window. Some tips on the advanced use of Screen such as this are presented later.) The session numbered 21020 is detached and marked accordingly. Because only one screen session exists, you can reattach to it directly with screen -r. Oblivious to Screen’s machinations, top continues uninterrupted.

To view the available windows in a session in a menu-like interface, click Ctrl-a, then the double quotation mark (") key in the current window:

By default, the name of a window is taken from the first command it launches — commonly, a shell. Hence, there are three bash windows in the menu above. To navigate the window menu, use the arrow keys to move up and down the list; to choose a window, simply press Return.

To dispose of the current window, type exit at the window’s shell prompt, or click the keyboard shortcut Ctrl-a, then k (lowercase K for “kill”). If you use the latter method, an alert appears at the bottom of the window to confirm that you want to kill the window. Click y (lowercase y for “yes”) to acknowledge or n (lowercase n for “no”) to reject the command. If you kill all the windows running under a Screen session, the originating screen command prints a message and is terminated:

If you’re following along and have killed all the open windows, the screen -list command yields No sockets..., indicating that no screen sessions are available.

So far, you’ve seen how to create multiple windows within a Screen session. Alone, this is enough to persist your command-line work and never lose work again.

Admittedly, however, managing seemingly identical, concurrent windows can become confusing; it would be superior if you could easily differentiate between one window and another without opening each one, especially if any amount of time passes between a detach and a reattach.

Indeed, Screen provides a number of options and tools to customize your work environment. You can name each window, and you can place a status bar at the bottom of each window to differentiate one from another.

To name a window, activate the window. Click Ctrl-a A (uppercase A, for “Annotate”), click Backspace as needed to elide any existing moniker, then type a meaningful name at the prompt:

This is shown in Figure 7, where a window is tagged Window A. A window nickname need not be unique.

Figure 7. You can assign a descriptive name to each window 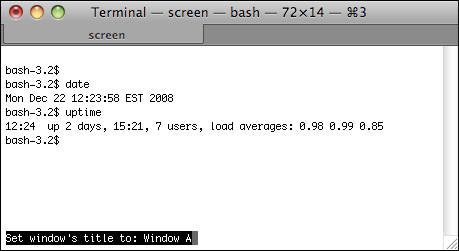 You can provide yourself additional visual cues to distinguish among windows with a status bar. Launch your favorite text editor, and create the file .screenrc in your home directory with the following lines:

With such a .screenrc configuration file in place, each new window displays a status line, including the window’s name. Figure 8 shows a window with a status line.

Figure 8. Use the status line to help identify each window at a glance 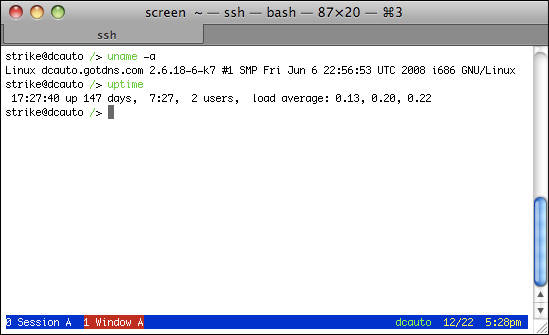 Screen has too many features to list in a brief introduction, but fluent use requires just a modicum of know-how and a few helpful options. Here are some additional pointers:

Advanced use of Screen

As mentioned earlier, you can create multiple, concurrent Screen sessions, where each session can manage a suite of windows. Each session has a unique identifier; use **screen -list** to catalog all available sessions. As with a window, you can name a session to refer to by its handle. Use **screen -S _label_** to assign a label to the new session.

Sharing is one of the best uses of a named Screen session. If permitted, you can connect to an existing session and collaborate with other users within any of the session’s windows. You can even switch to another window within the session independently! If you’re in the same window as another, anything typed or displayed is reflected to all partners. Let’s try it:

Figure 9. A session can be shared 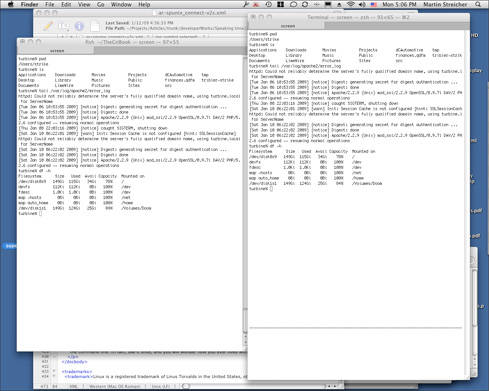 Using each login window, run UNIX® commands to produce output, click Screen keyboard shortcuts to switch among the windows in the shared session, and watch the results.

To delve further into Screen, read about split-screen mode and learn how you can prevent access to individual windows with an old-fashioned lock.

Screen is a remarkable tool that you will quickly find invaluable in any work you perform on the command line. In fact, use it once, and you will wonder how you ever lived without it.