Announcing the 2020 Call for Code® Global Challenge. Act now to take on climate change.Answer the call

The System Management Interface Tool (more commonly known as SMIT) is an interactive tool bundled with AIX®. Virtually any system administration-related task can be completed using a SMIT screen; the screens are logically grouped in a hierarchal manner for easy navigation. Fast paths associated with every function can be used to go directly to the relevant screen.

One of the best features of SMIT is that you can see exactly what commands it performs either before or after it runs those commands. SMIT doesn’t use any special hooks into the operating system. Everything it does, it does through standard AIX commands and Korn shell functions. This feature is especially useful when you need to automate a repetitive task; you can have SMIT create the proper command-line sequence, and you can then use those commands in your own script.

SMIT is part of the base operating system; the actual /usr/bin/smit command is in the bos.sysmgt.smit fileset. There are actually two versions of SMIT: a full-screen text-mode version and a graphical X Windows® client. If the DISPLAY variable is set, AIX automatically runs the GUI version. To use the text-mode version — even if your DISPLAY variable is set — run the smitty command , or you can run smit -a.

When SMIT is started without a fast path specified, the main menu is displayed. In all SMIT screens, the arrow keys are used to move up and down through the choices displayed. The Return key selects the currently highlighted item. To go back one level, press F3 or Esc + 3.

There are four types of screens that SMIT uses to interact with and display information to the user: menus, dialogs, selectors, and command status screens.

A menu screen displays a list of tasks, only one of which can be selected. When no fast path exists at SMIT startup, the main menu is displayed (see Listing 1 for the text-mode version).

Listing 1. The main System Management screen, as seen in the text-mode version of SMIT

Figure 1 shows SMIT’s main menu in the GUI version of the tool.

Figure 1. The main System Management screen, as seen in the GUI version of SMIT 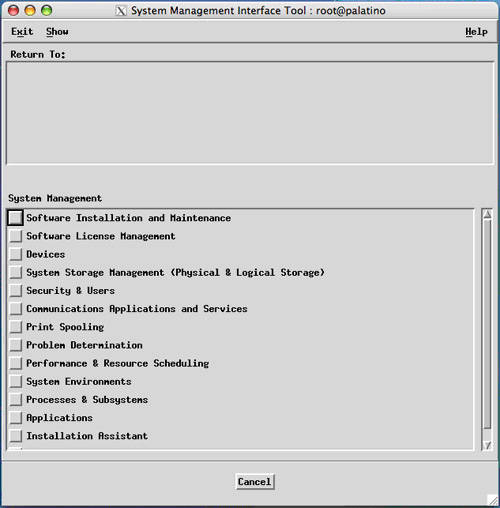 A dialog screen results from the selection of a specific task. Various symbols indicate the type of information entry that each field accepts. The data that you enter into those fields are used to form the command that SMIT executes.

Listing 2. A SMIT dialog screen. Specifically, the Change/Show Characteristics of a User screen

A select screen requires the user to choose a target, usually a device that will be used in the subsequent dialog screen. Selectors usually appear as a pop-up window, overlaying the text from the previous screen.

Listing 3. A SMIT select screen, requesting the selection of a single Logical Volume

The Command Status screen displays the output from the commands that SMIT executed. The top of the screen indicates the current status (Running, OK, or Failed), and it also shows whether there was anything written to STDOUT or STDERR.

Because of the hierarchal nature of SMIT’s functions, it is fairly simple to drill down into the task you wish to accomplish. If you find that you’ve selected the wrong item from a menu, pressing F3 (or Esc + 3) brings you back to the previous screen.

Every menu and dialog screen in SMIT has a fast path that can be used to go directly to that screen. To determine the fast path for a particular screen, navigate to that screen, and then press F8 or Esc + 8. A pop-up window lists the fast path and puts a print of the current screen into the SMIT log file.

Listing 5. A SMIT select screen, requesting the selection of a single Logical Volume

SMIT has several key commands that can be used to quickly navigate through long, scrolling screens of output. While most useful in Command Status screens, these keystrokes work in all screens (see Table 1).

Every SMIT session records entries in two files: smit.log and smit.script. These files will be written to the directory specified by the value of the HOME environment variable (not to the actual home directory for the user as specified in /etc/passwd.)

SMIT never overwrites existing log files; it always tries to append to those files if they exist and can be written to by the current user. If SMIT cannot write to those files, it displays a warning, but it continues to function without logging.

Note that while any user can run the SMIT executable, many of the AIX commands it runs to perform the tasks requested of it do require root or other restricted privileges. If a non-authorized user attempts to complete one of these tasks, the task fails. Since SMIT is most commonly run by root, the SMIT log files should be monitored and cleaned up so that they don’t grow unmanageably large and consume all available space in the / filesystem.

The smit.log file contains detailed information about activity performed using SMIT. For each SMIT session, it logs the date and time SMIT started, a record of every menu screen visited (along with that screen’s fast path), all commands executed by SMIT, and any output from those commands.

Monitoring smit.log might be useful in determining what changes have been made to the system and when those changes were made. That log file will not have any indication of changes made by running system commands directly, however.

The smit.script file contains the actual AIX commands that SMIT runs in order to execute a task. The file is written in Korn shell syntax, so it can be executed as is; doing so repeats all of the tasks originally done through SMIT.

One common use of the smit.script is to duplicate a number of tasks across several systems. If SMIT is used to make all of the changes to one system, the smit.script can be copied to the other systems and executed, performing all of the system changes without writing a single line of code.

An example using a SMIT script

Let’s now apply SMIT to a real-world AIX example. Imagine a situation in which you need to add a four gigabyte file system on ten, or one hundred, AIX systems. You could do this manually, though your hands would probably be tired at the end, and repetitive typing increases the chance of an error. You could put together the proper command, with all of the arguments and flags, and then run that on each system. Or, you could let SMIT write that command for you.

In the below example, use SMIT to create a four gigabyte Enhanced JFS (JFS2) filesystem to be automatically mounted at system restart on the mount point /fs01, using an inline JFS log. Then, copy the script that SMIT writes to the other systems, and run it to create the file systems there.

The first step is to start SMIT, using the command: smit -s /tmp/mknewfs.ksh crjfs2std. The -s flag tells SMIT to write its script output to the file /tmp/mknewfs.ksh, instead of the default file /smit.script. The activity will still be logged into /smit.log. By specifying the fast path crjfs2std, you jump directly to the Add an Enhanced Journaled File System dialog screen. Before that screen (shown in Listing 6) is displayed, you will be required to choose a Volume Group in which to create the new file system.

After pressing Enter to have SMIT execute the commands above in Listing 6, the following script in Listing 7 will be written to the file /tmp/mknewfs.ksh.

All that remains is to copy the above script to each of the remaining AIX systems, and to run it. There are numerous methods in which to do this. The simplest (though insecure) way to do this would be to loop through the systems, ‘rcp’ing the script, and then use rsh to execute it (see Listing 8).

Listing 8. rcping the script and using rsh to execute it

This is just one example, but it illustrates the advantages and time savings of using SMIT as an AIX administrator.

SMIT is a powerful tool for any AIX administrator. As with most tools, the best way to become familiar with its operation is to use it. It is important, though, to understand that SMIT does perform its actions on the live system, and there is no undo functionality. For some, but not all actions, SMIT issues a warning that it’s going to permanently delete information, and it requires confirmation to continue.

A safer way to explore the SMIT application is by invoking it with the -x flag. When the -x flag is specified on the command line, SMIT appears to function normally, but it will not actually execute any commands. Instead, it writes to the smit.script file the commands it would have run under normal operation.

Many of the options and input fields on SMIT menu and dialog screens have a built-in help feature, accessible by using the arrow keys to highlight or select the item, and pressing F1 (or Esc + 1). If available, a detailed explanation of that item will be shown in a pop-up window.

Remarkable Women in Tech & the Road to Success