The IBM acquisition of Red Hat means that the joint company now has a number of Java application runtimes, including:

This has inevitably led customers to ask two questions:

The answer to the second question is simple — there are no plans to remove or merge any of the runtimes. Each has a significant and loyal customer base who needs continuity of the runtimes they’re using. Efficiencies of development are already achieved through collaboration in open source projects, such as SmallRye and Apache CXF.

This article will address the first question. The answer is not as simple as, “Use runtime X” or even: “For microservices, use runtime X.” In order to choose a runtime, or runtimes, it’s important to understand three things:

The subsequent sections of this article detail the latter two points. The article also discusses how to choose a runtime based on all three.

The evolution of runtimes

To understand the characteristics of each runtime and how they might apply, it’s worth looking back at their history, as this greatly influences the types of applications for which they are best-suited.

Commercialization of the World Wide Web and standardization of Java application server technology led to a number of vendors creating application server products. WebSphere Application Server, and what became Wildfly and JBoss EAP, were first released in the late 1990s. The hardware on which they ran had modest compute power by today’s standards — networks were significantly slower and had yet to standardize around Ethernet, and memory and disk capacities were limited (it would be 10 years before the first 1TB HDD was released). Software delivery was also dominated by Waterfall and associated engineering practices. This naturally led to the development and delivery of monolithic applications. Of course, in those days they were just referred to as “applications” because there were no other types. It’s worth saying up front that monolithic applications are not bad — unmaintainable monoliths are bad, and it’s possible to build unmaintainable systems using any architecture style. In the early 2000s, VMs emerged as an approach to simplifying server deployments, but clustering was done in a way specific to each runtime type that you deployed (for example, WebSphere ND Cells).

The constraints, practices, and long delivery cycles led to Enterprise Java runtimes being optimized for long, stable, performant up-times; once you deployed the server and application, you wanted it to just keep going no matter what.

In the years that followed, ever-increasing demand for faster and more scalable delivery drove significant advancements in infrastructure and methodologies. Processors, network, and storage all grew in speed and capacity, and software delivery embraced agile practices. The push for faster time-to-market led to increasing demand for lighter-weight runtimes that aided the goal of delivering applications more rapidly. In response to these requirements, in 2012, IBM created WebSphere Liberty.

Liberty took a fresh look at how to address the demands of rapid application development and delivery: the needs to be lightweight, simple to configure, simple to deploy, and support emerging best practices and tools. The applications developed at this time were still predominantly monoliths but, with Liberty’s help, easier and faster to deliver. Liberty started out supporting simple Web applications, but based on customer demand soon grew to support the full Java EE capabilities. Liberty’s ability to install and configure ‘just enough runtime’ -– only those capabilities required by the application — meant it didn’t suffer from the runtime bloat often associated with enterprise application servers. Predating containers and container orchestration platforms, Liberty also added the clustering and health management capabilities (based around Liberty Collectives) demanded by enterprises.

Over the next five years, open source became an increasingly important aspect of software adoption. In support of this shift, in 2017, Liberty moved to an open source-first development model by open sourcing WebSphere Liberty as Open Liberty under the Eclipse Public License.

Many monolithic applications grew over the years and often any consideration for their modularity was lost, making them difficult to maintain and extend. Businesses seeking to further reduce time to delivery and increase scalability for far greater workload demands found themselves constrained by the monolith’s inherent “deploy all, scale all” nature. To achieve greater flexibility and scalability, these applications needed to be re-imagined as many smaller units, which could be developed, deployed, and scaled independently, namely microservices and functions (often deployed to clouds in Functions as a Service [FaaS] environments).

The shift from one monolithic application to many microservices or functions has driven demand for technologies that both simplify operations and reduce infrastructure costs. Containers and Kubernetes-based container orchestration platforms, epitomized by Red Hat OpenShift®, have rapidly become synonymous with microservices. Containers enabling lightweight isolated deployments, and Kubernetes enabling consistent container deployment, management, and clustering, removing the need for runtime-centric clustering approaches, such as ND Cells and Liberty Collectives.

The growth in popularity of microservices led to demand for new API standards, and so a number of vendors and Java user groups got together, resulting in the creation of the Eclipse MicroProfile specifications. MicroProfile rapidly evolved to provide a full set of open microservice APIs, with a number of runtimes also providing support, including Liberty, WildFly, JBoss EAP, Payara, TomEE, and Quarkus.

The drive for finer-grained components deployed as microservices or functions has led to increased demand for lighter and faster runtimes. In 2019, Red Hat released Quarkus, a runtime tailored specifically for these architecture styles. In doing so, it firmly positioned Quarkus for new functions and microservices, only supporting the subset of the Java APIs covered by native compilation.

Liberty and Quarkus both offer great JVM-based runtime profiles for microservices, responding to first requests in around a second. Additionally, Quarkus offers a compile-native capability, giving an execution profile well-suited to functions, where optimization for a single request is important.

The past few years have seen a strong focus on the delivery of microservice architectures. As with any new concept, the industry goes through a discovery process and, ultimately, learns how best to apply it. Before reaching this enlightened state, there is a tendency to over-apply a technology, leading to poor outcomes. Gartner refers to this learning process as the “Gartner Hype Cycle” and currently positions microservices at the “Trough of Disillusionment.” This doesn’t mean that microservices are bad; it just means that we’re at a point where we are only just beginning to truly appreciate where microservices are appropriate and where they are not.

A quick search of the internet reveals a growing number of articles debating monoliths, microservices, and functions. There are also examples talking about styles between monoliths and microservices, using terms such as “macroservice” or “macrolith.” In some cases, this is a reaction to over-decomposition into microservices that are too fine-grained, leading to an overly complex system where the complexity outweighs the benefits. In others, it’s a direct attempt to find the right balance between the functional and non-functional characteristics of each architecture style. High-profile examples of companies changing architecture styles over time include Uber teams now deploying coarser-grained macroservices as well as microservices, and Segment, who switched from a monolith to microservices and then back to a monolith. 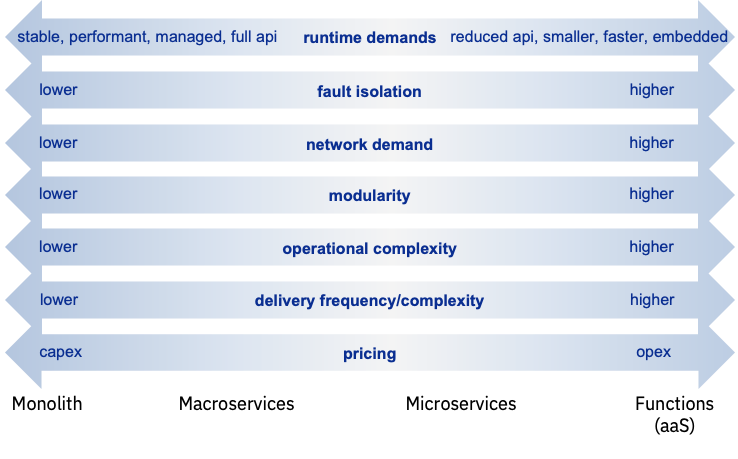 Starting at the bottom-most characteristics, lets take a look at them in more detail:

We’ve seen how the history and evolution of each runtime has strongly influenced the architecture styles for which they are best suited. We’ve seen how enterprises have a growing appreciation of the benefits of different architecture styles and how many will be flexible in their use. We’ve also seen many of the characteristics associated with each architecture style and how these can be used to help decide which styles to use, and quite possibly mix or change styles over time. But what does that mean in terms of runtime choice?

This diagram shows that, whichever architecture style is chosen, IBM and Red Hat have it covered. On closer inspection, we see that there are three options for monoliths (traditional WebSphere Application Server, JBoss EAP, and Liberty) and two options for microservices (Liberty and Quarkus). However, rather than this being a discussion about which is best for a specific architecture style, it’s important to consider the heritage of each runtime, the strategy for each of your applications, and the architecture styles you’re likely to use. The following example scenarios should help:

Getting started with application modernization

Get your Java microservice up and running

IBM and Java: The next 25 years