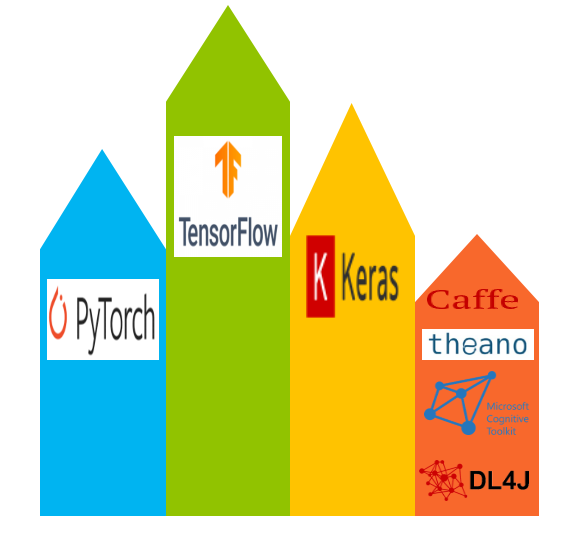 This article provides an overview of six of the most popular deep learning frameworks: TensorFlow, Keras, PyTorch, Caffe, Theano, and Deeplearning4j. Over the past few years, three of these deep learning frameworks – Tensorflow, Keras, and PyTorch – have gained momentum because of their ease of use, extensive usage in academic research, and commercial code and extensibility. In this article, We’ll also compare and contrast TensorFlow and PyTorch.

In the context of machine learning, tensor refers to the multidimensional array used in the mathematical models that describe neural networks. In other words, a tensor is usually a higher-dimension generalization of a matrix or a vector.

Through a simple notation that uses a rank to show the number of dimensions, tensors allow the representation of complex _n_-dimensional vectors and hyper-shapes as _n_-dimensional arrays. Tensors have two properties: a datatype and a shape.

The framework can run on the CPU, GPU, or TPU on servers, desktops, and mobile devices. Developers can deploy TensorFlow on multiple operating systems and platforms either locally or in the cloud. Many developers consider TensorFlow to have better support for distributed processing and greater flexibility and performance for commercial applications than similar deep learning frameworks such as Torch and Theano, which are also capable of hardware acceleration and widely used in academia.

Deep learning neural networks typically consist of many layers. They transfer data or perform operations between layers using multidimensional arrays. A tensor flows between the layers of a neural network, thus, the name TensorFlow.

The main programming language for TensorFlow is Python. C++, the Java® language, and the Go application programming interface (API) are also available without stability promises, as are many third-party bindings for C#, Haskell, Julia, Rust, Ruby, Scala, R, and even PHP. Google has a mobile-optimized TensorFlow-Lite library to run TensorFlow applications on Android.

This section provides an overview of the TensorFlow system, including the framework’s benefits and applications.

This section looks at the applications that TensorFlow is good at. Obviously, because Google was using its proprietary version of TensorFlow for text and voice search, language translation, and image search applications, the major strengths of TensorFlow are in classification and inference. For example, Google implemented RankBrain, the engine that ranks Google search results, in TensorFlow.

TensorFlow can be used to improve speech recognition and speech synthesis by differentiating multiple voices or filtering speech in high-ambient-noise environments, mimicking voice patterns for more natural-sounding text to speech. Additionally, it handles sentence structure in different languages to produce better translations. It can be used for image and video recognition as well as classification of objects, landmarks, people, sentiments, or activities. This has resulted in major improvements in image and video search.

Because of its flexible, extensible, and modular design, TensorFlow doesn’t limit developers to specific models or applications. Developers have used TensorFlow to implement not only machine learning and deep learning algorithms but also statistical and general computational models. For more information about applications and contributed models, see TensorFlow case studies.

Keras started as a simplified front end for the academically popular Theano framework. Since then, the Keras API has become a part of Google TensorFlow. Keras officially supports Microsoft Cognitive Toolkit (CNTK), Deeplearning4J, and Apache MXNet. Because of this widespread support, Keras has gained the position of the de facto tool for migration between frameworks. Developers can port not only deep learning neural network algorithms and models, but also pretrained networks and weights.

Keras is an open source Python package released under the Massachusetts Institute of Technology (MIT) license, with François Chollet, Google, Microsoft, and other contributors holding some of the software’s copyrights.

A Keras front end enables rapid prototyping of neural network models in research. The API is easy to learn and use and has the added advantage of easily porting models between frameworks.

However, with Keras 2.4.0, Keras has discontinued multi-backend Keras and focuses exclusively on TensorFlow.

So, why use Keras? There are a number of benefits, including:

Note: Several different licenses govern the use of the weights for these models because the models originate from diverse sources.

Using Keras, you can define sophisticated models with a few lines of code. Keras is particularly useful for training convolutional neural networks using a small training data set. Although Keras has seen more use in image classification applications, it is also useful for natural language processing (NLP) applications for both text and speech.

Demystifying the relation between TensorFlow 2 and Keras

Keras and TensorFlow are often wrongly assumed as competitive frameworks. Keras is a high-level API for developing neural network models and does not handle low-level computations. For these low-level computations, Keras relied on other back-end engines such as Theano, Tensorflow, and CNTK. However, as per the latest release of Keras, Keras will mainly focus on its integration with the TensorFlow core API while continuing to support fixes for Theano/CNTK. 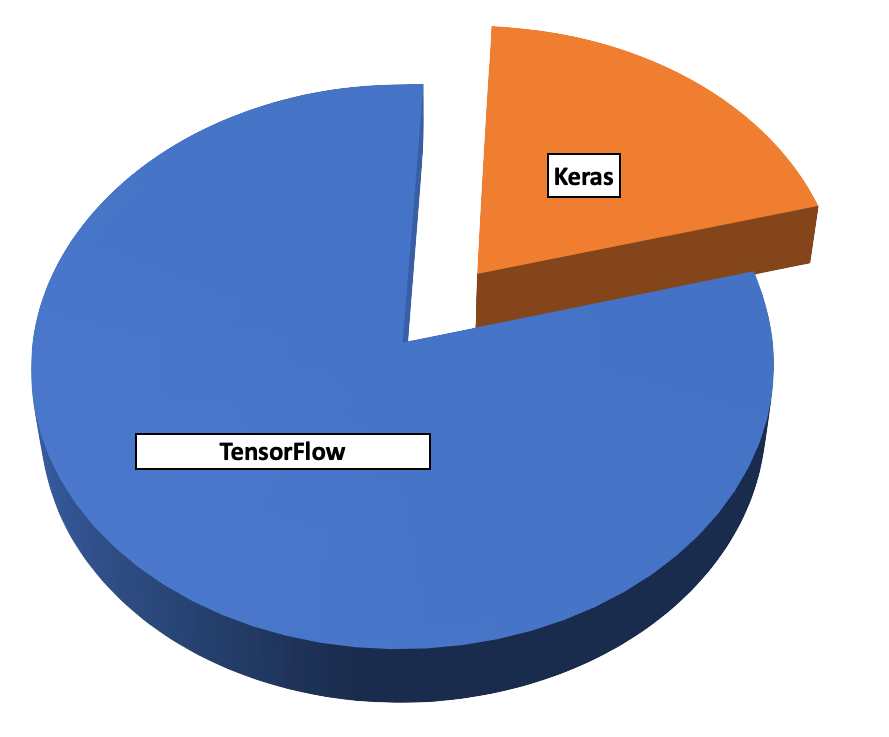 Keras is essentially a part of TensorFlow. The tf.keras submodule/package is the implementation of the Keras API for TensorFlow. Moving forward, all deep learning practitioners are now encouraged to switch their code to TensorFlow 2.0 and the tf.keras package because the original Keras package will be mainly supporting bug fixes.

PyTorch is an open source Python package released under the modified Berkeley Software Distribution license. Facebook, the Idiap Research Institute, New York University (NYU), and NEC Labs America hold the copyrights for PyTorch. Although Python is the language of choice for data science, PyTorch is a relative newcomer to the deep learning arena.

This section provides an overview of the PyTorch system and gives more details about the following topics:

Neural network algorithms typically compute peaks or troughs of a loss function, with most using a gradient descent function to do so. In Torch, PyTorch’s predecessor, the Torch Autograd package, contributed by Twitter, computes the gradient functions. Torch Autograd is based on Python Autograd.

The primary use case for PyTorch is research. Facebook uses PyTorch for innovative research and switches to Caffe2 for production. A format called Open Neural Network Exchange allows users to convert models between PyTorch and Caffe2 and reduces the lag time between research and production.

Python packages such as Autograd and Chainer both use a technique known as tape-based auto-differentiation to calculate gradients. As such, those packages heavily influenced and inspired the design of PyTorch.

Tape-based auto-differentiation works just like a tape recorder in that it records operations performed, and then replays them to compute gradients—a method also known as reverse-mode auto-differentiation. PyTorch Autograd has one of the fastest implementations of this function.

Using this feature, PyTorch users can tweak their neural networks in an arbitrary manner without overhead or lag penalties. As a result, unlike in most well-known frameworks, PyTorch users can dynamically build graphs, with the framework’s speed and flexibility facilitating the research and development of new deep learning algorithms.

Some of this performance comes from the modular design used in the PyTorch core. PyTorch implements most of the tensor and neural network back ends for CPUs and GPUs as separate and lean C-based modules, with integrated math acceleration libraries to boost speed.

PyTorch integrates seamlessly with Python and uses the Imperative coding style by design. Moreover, the design keeps the extensibility that made its Lua-based predecessor popular. Users can program by using C/C++ with an extension API that is based on the C Foreign Function Interface (cFFI) for Python.

Many developers use Torch as a GPU-capable NumPy alternative; others use it to develop deep learning algorithms. Torch has gained prominence because of its use by Facebook and Twitter. The Google DeepMind AI project started out using Torch, and then switched to TensorFlow.

What are Lua and LuaJIT

Lua is a lightweight scripting language that supports multiple programming models; it has its origins in application extensibility. Lua is compact and written in C, which makes it able to run on constrained embedded platforms. The Pontifical Catholic University of Rio de Janeiro in Brazil first introduced Lua in 1993.

LuaJIT is a Just-in-time (JIT) compiler with platform-specific optimizations to improve the performance of Lua. It also extends and enhances the C API of standard Lua.

Two PyTorch variants exist. Originally, Hugh Perkins developed “pytorch” as a Python wrapper for the LuaJIT-based Torch framework. However, the PyTorch variant discussed here is a completely new development. Unlike the older variant, PyTorch no longer uses the Lua language and LuaJIT. Instead, it is a native Python package.

PyTorch redesigns and implements Torch in Python while sharing the same core C libraries for the back-end code. PyTorch developers tuned this back-end code to run Python efficiently. They also kept the GPU-based hardware acceleration as well as the extensibility features that made Lua-based Torch popular with researchers.

PyTorch has many benefits. Let’s look at some of the major items.

Torch and PyTorch share the same back-end code, and there’s often a lot of confusion between Lua-based Torch and PyTorch in the literature. As a result, it’s difficult to distinguish between the two unless you look at the timeline. For example, the Google DeepMind AI project used Torch before switching to TensorFlow. Because the switch happened before the advent of PyTorch, one cannot consider it an example of a PyTorch application. Twitter was a Torch contributor and now uses TensorFlow and PyTorch to fine-tune its ranking algorithms on timelines.

Both Torch and PyTorch have seen heavy use at Facebook to research NLP for text and speech. Facebook has released many open source PyTorch projects, including ones related to:

Because of its flexible, extensible, and modular design, PyTorch doesn’t limit you to specific models or applications. You can use PyTorch as a NumPy replacement or to implement machine learning and deep learning algorithms. For more information about applications and contributed models, see the PyTorch examples page at https://github.com/pytorch/examples.

This section compares two of the currently most popular deep learning frameworks: TensorFlow and PyTorch.

Another popular deep learning framework is Caffe. Caffe was originally developed as part of a Ph.D. dissertation but is now released under the Berkeley Software Distribution license. Caffe supports a wide range of deep learning architectures, including CNN and LSTM, but notably does not support RBMs or DBMs (although, Caffe2 will include such support).

Theano is a low-level Python library that is used to target deep learning tasks that are related to defining, optimizing, and evaluating mathematical expressions. While it has quite an impressive computing performance, there are many complaints regarding the interface and error messages. Therefore, Theano is mainly used in combination with wrappers such as Keras, Lasagne, and Blocks, three high-level frameworks aimed at fast prototyping.

Deeplearning4j is a popular deep learning framework that is focused on Java technology, but it includes application programming interfaces for other languages such as Scala, Python, and Clojure. The framework is released under the Apache license and includes support for RBMs, DBNs, CNNs, and RNNs. Deeplearning4j also includes distributed parallel versions that work with Apache Hadoop and Spark (big data processing frameworks).