Use JupyterLab and Elyra to create and run machine learning pipelines

Data scientists frequently use Jupyter Notebooks to do their work. Whether you are loading or processing data, analyzing data, using data to train a model, or perform other tasks of the data science workflow, notebooks are usually key.

Let’s say you create a set of notebooks that load, cleanse, and analyze time-series data, which is made available periodically. Instead of running each notebook manually (or performing all tasks in a single notebook, which limits reusability of task specific code), you could create and run a reusable machine learning pipeline like the following:

With the open source Elyra project, you can do this in JupyterLab, Apache Airflow, or Kubeflow Pipelines.

Quick Intro to Jupyterlab and Elyra

JupyterLab extensions make it possible for anyone to customize the user experience. Extensions provide new functionality, like a CSV file editor or a visualization, and integrate services (like git for sharing and version control) or themes.

Elyra is a set of AI-centric extensions for JupyterLab that aim to simplify and streamline day-to-day activities. Its main feature is the Visual Pipeline Editor, which enables you to create workflows from Python notebooks or scripts and run them locally in JupyterLab, or remotely on Kubeflow Pipelines or Apache Airflow.

You will use the Visual Pipeline Editor to assemble pipelines in Elyra. The pipeline assembly process generally involves:

To create a new pipelines in Elyra, open the Pipeline Editor from the Launcher. 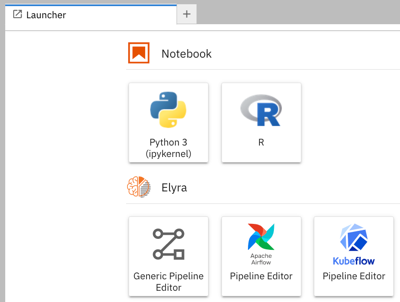 Adding Python notebooks and scripts to the pipeline

You can add Python notebooks and scripts to the pipeline by dragging them from the JupyterLab File Browser onto the canvas.

Each notebook or file is represented by a node that includes an input port and an output port. 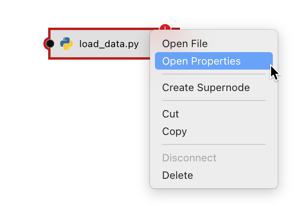 Optionally, you can associate nodes with comments to describe their purpose.

Defining dependencies between notebooks and scripts

Dependencies are used to determine the order in which the nodes will be executed during a pipeline run.

The following rules are applied:

There are some distinct differences between how pipelines are executed in JupyterLab and on a third-party workflow orchestration framework, such as Kubeflow Pipelines.

You can execute pipelines in JupyterLab as long as the environment provides access to the pipeline’s prerequisites. For example, the kernels that notebooks are associated with must already be installed, just like required packages (if they are not installed in the notebooks). 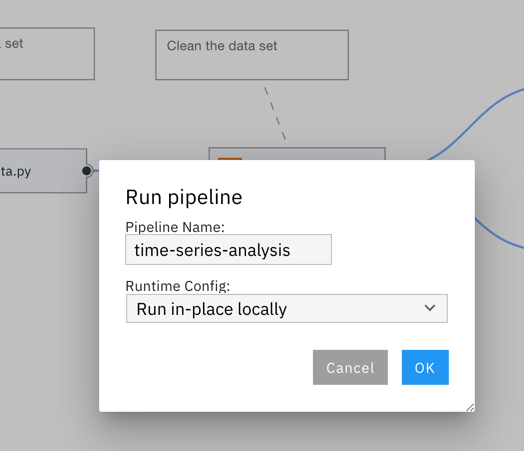 Running pipelines in the JupyterLab environment should be possible if:

In the JupyterLab environment: 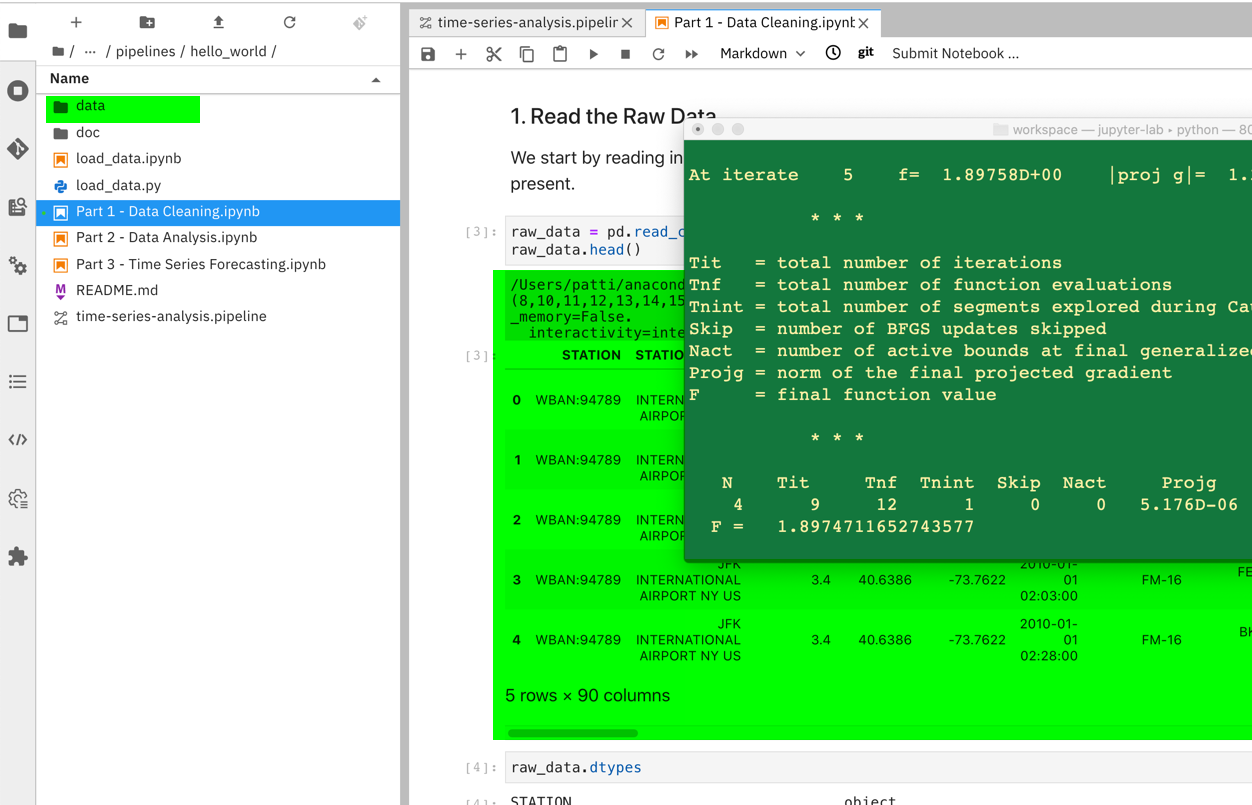 Elyra currently does not provide a pipeline-monitoring capability in the JupyterLab UI aside from a message after processing has completed. However, the relevant information is contained in the JupyterLab console output.

While running pipelines locally might be feasible in some scenarios, it’s rather impractical if large data volumes need to be processed or if compute tasks require special-purpose hardware like GPUs or TPUs to perform resource-intensive calculations.

You can configure Elyra to access secured and unsecured Kubeflow Pipelines instances by defining a runtime configuration. Once configured, the selected configuration is used to run the pipeline. 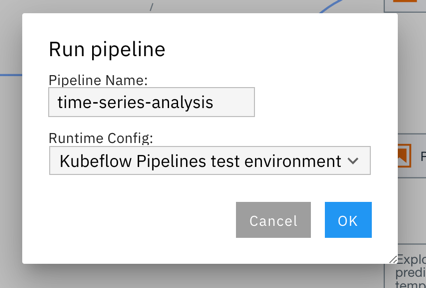 The following chart illustrates this for two dependent notebook nodes. 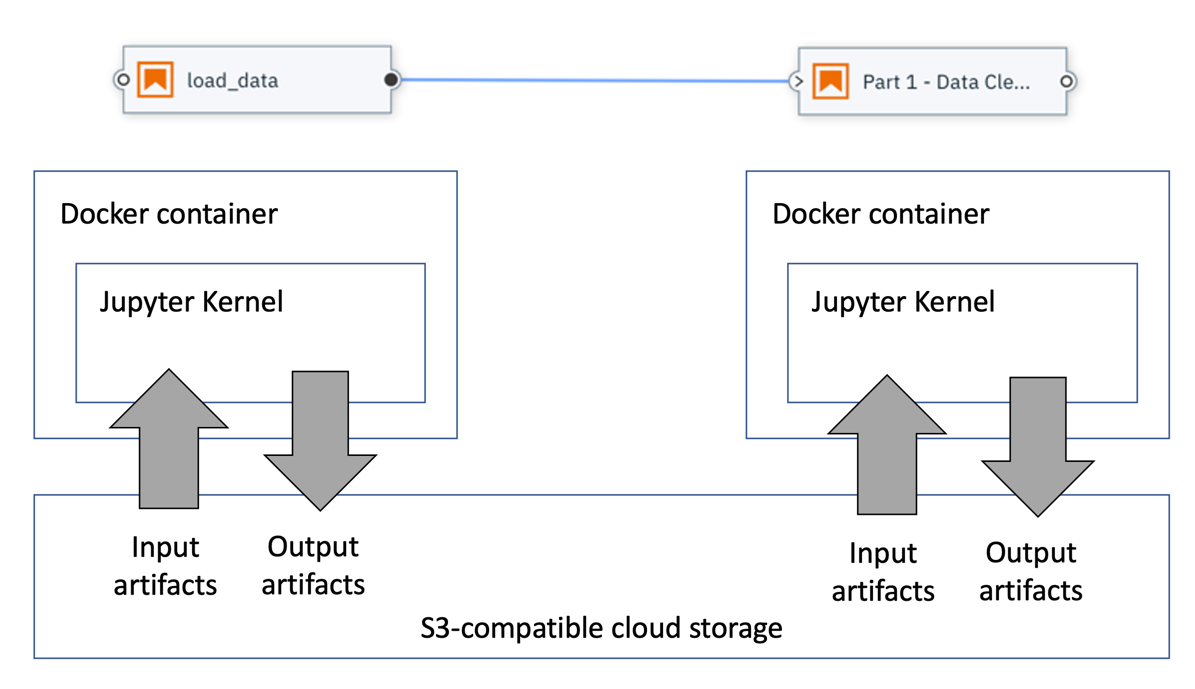 Since Elyra is not yet a mature project, it currently relies on the Kubeflow Pipelines UI for pipeline execution monitoring.

You can find additional details, along with step-by-step instructions, in the Running notebook pipelines on Kubeflow Pipelines tutorial.

Ways to try Elyra and pipelines

The referenced tutorials are a great way to get started with pipelines. If you are looking for a more complex example this COVID-19 time-series pipeline might fit the bill.

If you’d like to try out Elyra and start building your own pipelines, you have three options:

Kubeflow Pipelines is not included in any of the Elyra installation options.

Running Elyra in a sandbox environment on the cloud

You can test drive Elyra on mybinder.org, without having to install anything. Follow this link to try out the latest stable release or the latest development version (if you feel adventurous) in a sandbox environment.

The sandbox environment contains a getting_started markdown document, which provides a short tour of the Elyra features: 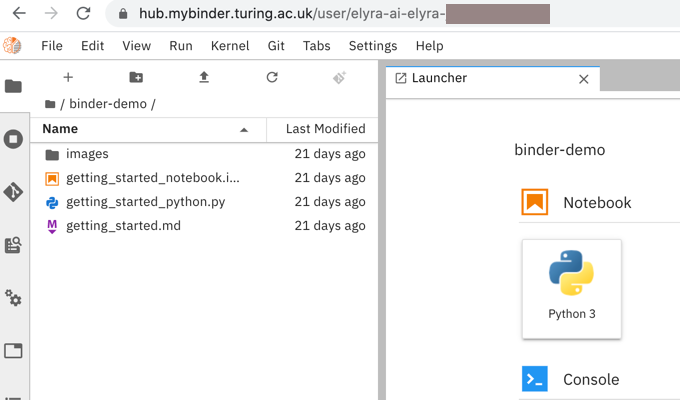 A couple of things to note:

If you have Docker installed on your machine, consider using one of the Docker images instead.

The Elyra community publishes ready-to-use Docker images on Docker Hub, which have JupyterLab and the Elyra extension pre-installed. Docker images are approximately one GB in size are tagged as follows:

Once you’ve decided which image to use (elyra/elyra:latest is always an excellent choice because you won’t miss out on the latest features!), you can spin up a sandbox container as follows:

Open your web browser to the displayed URL and you are ready to start. 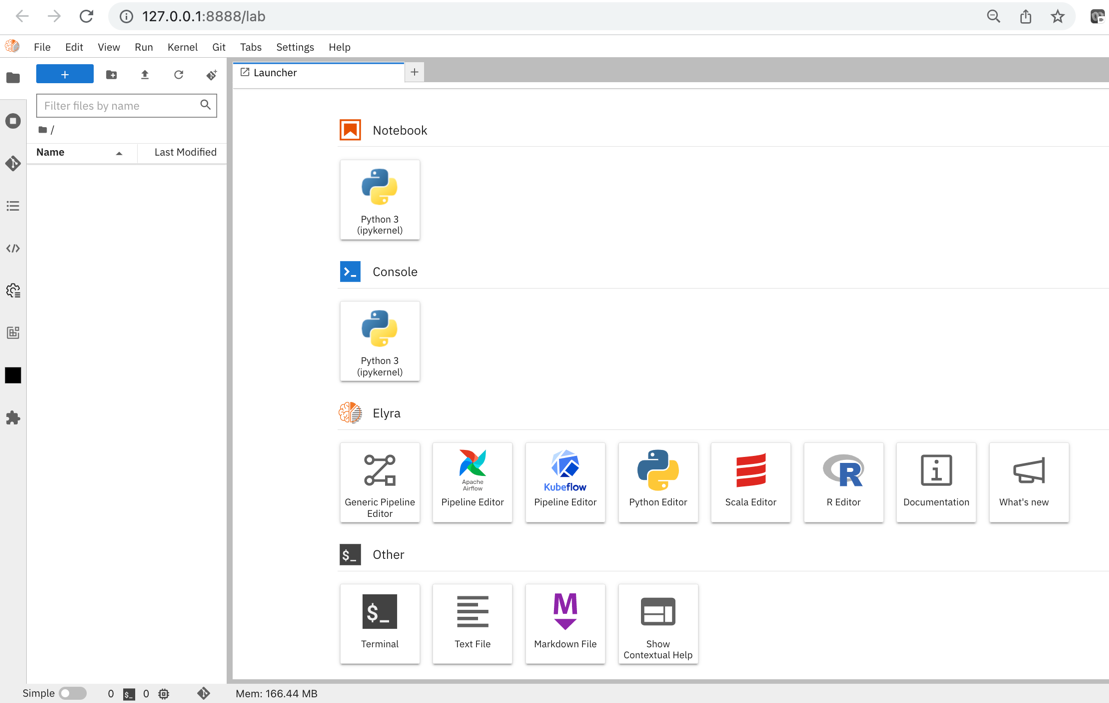 The caveat is: In the sandbox mode, you cannot access existing files (such as notebooks) on your local machine and all changes you make are discarded when you shut down the container.

Therefore, it’s better to launch the Docker container like so, replacing ${HOME}/jupyter-notebooks/ and ${HOME}/jupyter-data-dir with the names of existing local directories:

This way all changes are preserved when you shut down the container, and you won’t have to start from scratch when you bring it up again.

If your local environment meets the prerequisites, you can install JupyterLab and Elyra using pip, conda, or from source code, following the instructions in the installation guide.

Elyra is a community-driven effort. We welcome contributions of any kind: bug reports, feature requests, and, of course, pull requests. You can reach us in the community chatroom, the discussion forum, or by joining our weekly community call.