Large enterprises process a vast amount of logs every day through their SIEM (Security, Information, and Event Management) systems in an attempt to prevent security breaches. The volume of these logs, along with the false positives and queries that come with them, are only ever increasing. This makes it more and more difficult over time to run large searches and detect threats before any incidents can take place.

In the case of an enterprise company like IBM, there is an overwhelming amount of traffic that comes through the network perimeter. Firewalls on the network perimeter, in DMZs, and throughout other zones of the IBM network must all be able to handle enormous amounts of data in real time.

To make analysts’ lives easier in responding to threats in a timely manner, our team set out to architect an improved custom rule engine that could process complex events in real time with very high throughput speed and low latency, all while remaining distributed to maintain robust fault tolerance. This was the driving goal behind developing the System of Logs Intrusion Detection Engine (SLIDE) as our solution, with Apache Flink as the central hero of our project.

The team who developed SLIDE included myself and four interns: Ayush Khandelwal, Tabor Kvasnicka, Taner Seytgaziyev, and Rory Yang. This article describes the process of designing and developing the threat detection engine, including the technologies we used, use cases that SLIDE supports, and our implementation.

We primarily used open-source Apache software products for our threat detection engine. The highly scalable and efficient architecture is meant to ingest, parse, filter, and provide alerts on a data stream to a custom Kibana dashboard. We used these Apache products in the architecture (see the following figure): NiFi, HBase, Kafka, and Flink.

You will notice that SLIDE is ingesting data from two sources: indicators of compromise (IOCs) from ThreatConnect and firewall logs from Palo Alto Networks.

Here is the complete list of technologies that we used:

Use cases for SLIDE

It made the most sense that an intrusion detection engine would be used in a Security Operations Center (SOC) by SOC analysts to investigate alerts. There are many SOC use cases, but the ones for SLIDE centered around firewalls since the engine is absorbing data from Palo Alto Logs and ThreatConnect indicators of compromise (IOCs). After deciding on the end user, six use cases were researched, documented, and implemented.

Most of the use cases dealt with mitigating threats at layers three, four, and seven of the OSI Model. It was found that a lot of malicious activity happens at these layers, especially in regard to DoS and DDoS attacks; therefore, some focus was aimed toward helping a potential SOC Analyst to mitigate the most malicious threats to an organization.

Here are the use cases we implemented (and the layer of the OSI Model each use case addresses):

The following figure shows the flow of processors that was created in NiFi to generate the destination IP addresses. 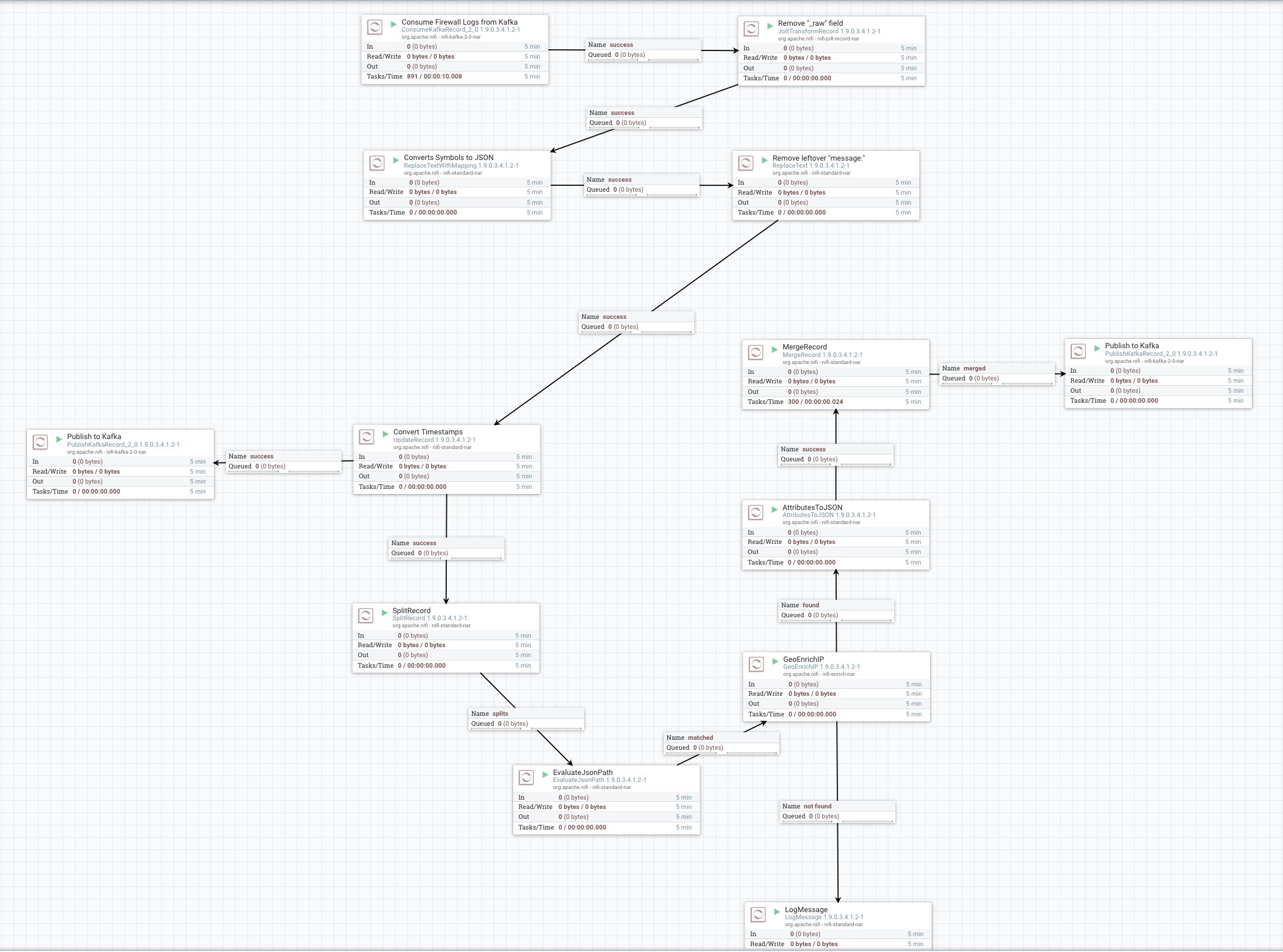 Implementation of our threat detection engine

The real power of the threat detection engine consists of Flink DataStream API programs on the backend and a Kibana dashboard on the front end. These two major pieces working together allowed for a full end to end solution, from the filtering and parsing of firewall logs to color-coded bar graphs representing the volume of each different category of threat for actionable insights.

In regard to the technical implementation of use cases for SLIDE, most of the use cases were done using the Flink DataStream API because of its transformation operators that work seamlessly with streams and windows (windows represent time). Functions for the DataStream API include map(), reduce(), and aggregate(), among others, and can be defined by writing classes that extend interfaces, writing an Anonymous Inner Class in Java, or writing lambda functions in Java or Scala. We used Java for the DataStream API programs to filter the data we wanted, as most of us were already accustomed to this language.

The pictures below represent snapshots of the DataStream API programs and the standard outputs after running the main functions. These are all running in the IntelliJ editor. You may also notice that Kafka and Zookeeper have to be running with a JSON log file being passed into each program in order for everything to run properly. This was done using commands inside of a basic Unix terminal, and allowed us to test each individual use case.

The following figure shows which Botnet Command and Control (C&C) Server IP addresses were found as well as the DataStream API code. 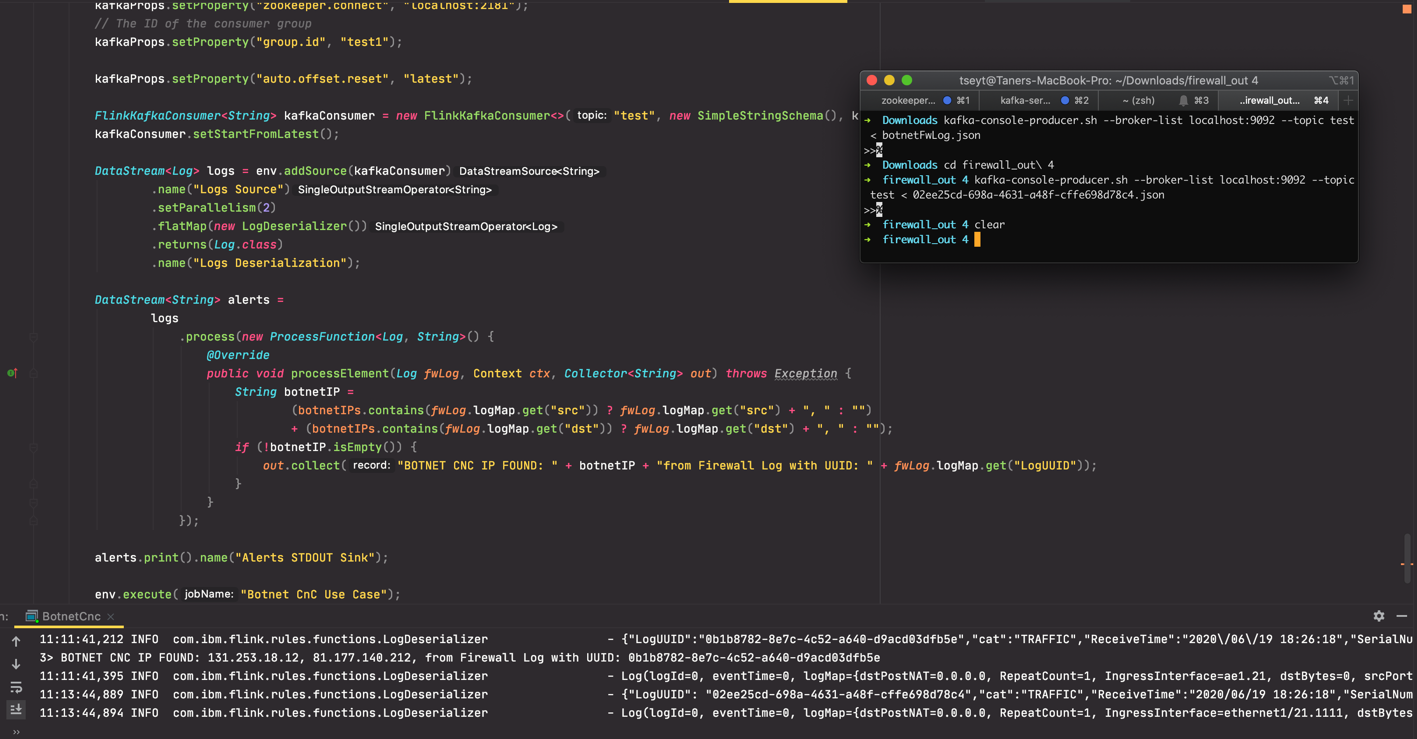 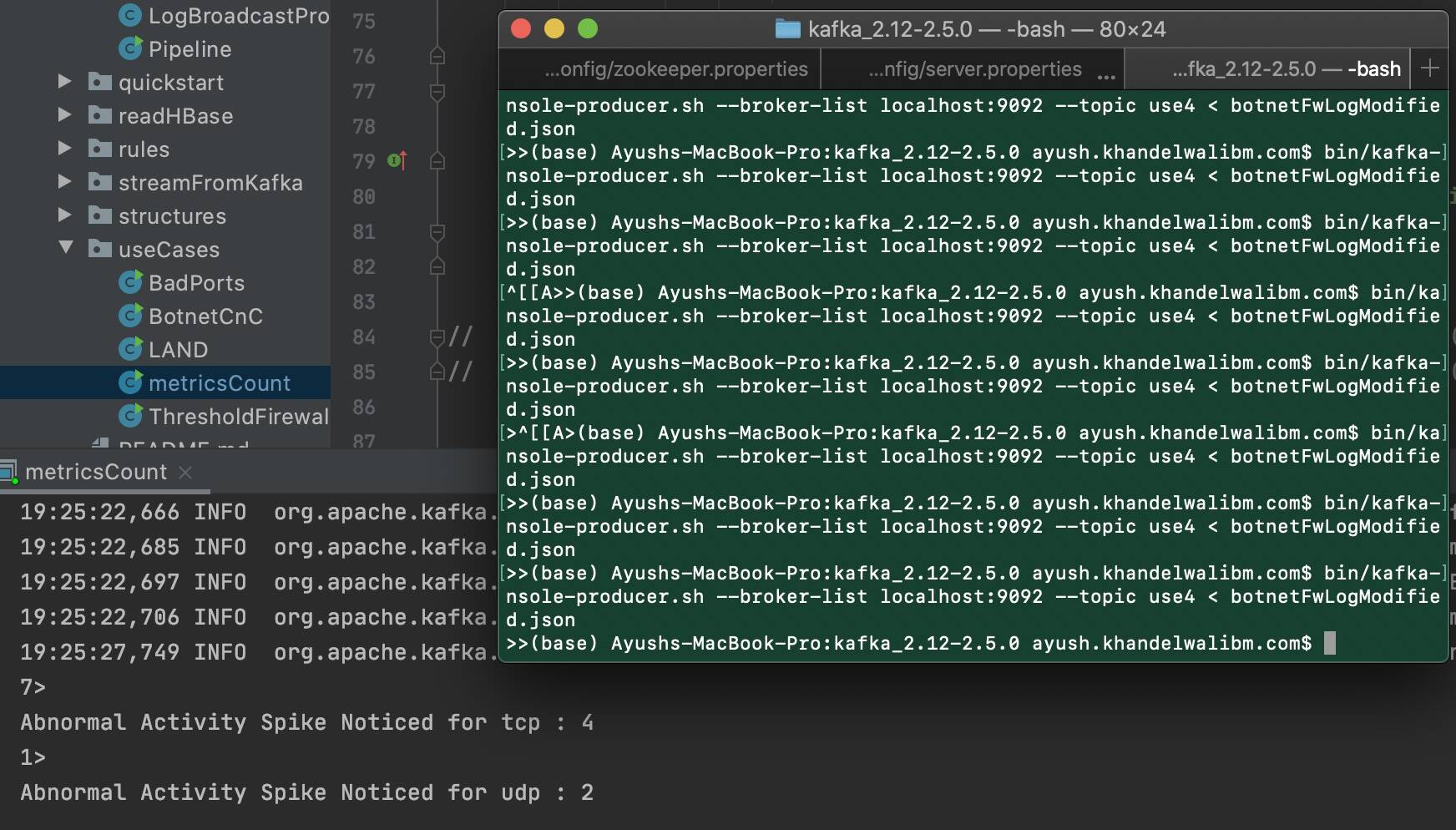 The following figure shows an alert for matching source and destination IP addresses that were found, helping to mitigate LAND attacks.

The following figure shows a POC for what could be a phishing campaign detection with London, United Kingdom showing up several times, and the IP addresses associated with it. This use case would have to be iterated upon further as to not generate too many false positives from friendly cities. It would also need to be associated with click events from email clients. 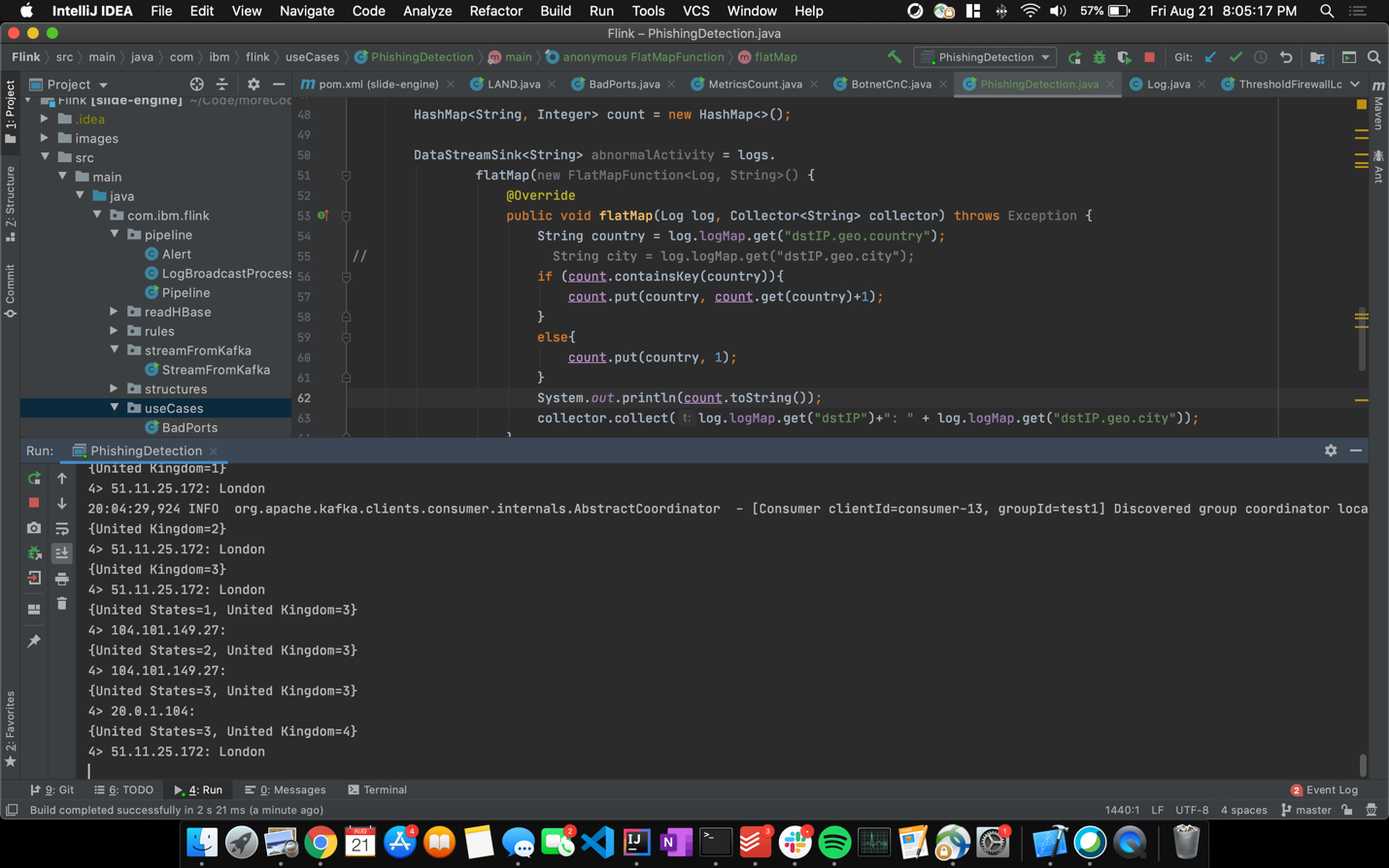 As mentioned above, Kibana is a data-visualization tool used for log and time-series analytics, application monitoring, and operational intelligence use cases. We created several dashboards in Kibana to visualize the alerts from Flink which provide a high-level overview of the alerts. The Kibana dashboard allows us to view the output from Flink in an aesthetically pleasing format, and also allows for quick insights.

The following figure shows the total alerts of all use cases with the Home tab selected:

These next two figures represent a visualization of two specific use cases: the Botnet C&C and ThreatConnect IOCs tabs selected respectively.

Through our intern project, we were able to explore the efficiency, reliability, and scalability of our architecture. We successfully met our goal to design and develop an end-to-end threat detection engine that can handle millions of logs a day and provide us with real-time analytics and alerts. SLIDE is a custom rule engine that allows for the speedy ingestion and parsing of logs, addressing numerous use cases, and for visualizing alerts through a personalized dashboard. And, all of this was achieved by using the latest open-source Apache technologies, such as Nifi, Kafka, HBase, and Flink along with ElasticSearch, Kibana, and Docker.

In the future, we plan to connect more log sources to our engine and expand its functionality. All components in SLIDE are horizontally scalable and the architecture is set up in a way that makes it incredibly easy to connect new log sources and import a new set of rules using our rule engine parser. SLIDE is a highly efficient, scalable, fault-tolerant, low-latency distributed threat detection engine that can run real time event processing to provide metrics and analytics.