Hierarchical Queries with DB2 Connect By

According to Wikipedia: Recursion (lat. recurrere -> currere = run and re = return) is the process of repeating items in a self-similar way. In mathematics or computer sciences recursion refers to a method of defining functions based on their own definition.

Recursive data stored in a table (or a physical file) point to data in another column/field in a different row/record within the same table/physical file.

For all subsequent examples one of the tables STAFF (Organization Chart) or FLIGHTS (Flight connections) will be used.

The following figure shows a small organization chart and the table STAFF where these data are stored. The table STAFF consists of 3 columns:

The next figure shows a chart containing flight connections. When analyzing bi-directional data a cycle may occur that will result in an infinite loop (marked in red). The figure also displays an excerpt of the table FLIGHTS containing the flight connections. Within this sample data you will detect there is not only a connection between Berlin and Frankfurt, but also between Frankfurt and Berlin.

The Table FLIGHTS consists of the following columns:

According to the SQL Standard, the method to evaluate hierarchical or bi-directional data is the Recursive Common Table Expression (RCTE).

The RCTE can be divided into 2 parts:

Additional clauses that must be specified between the RTCE and final SELECT statement allow predefining the sequence in which the result is to be returned.

To avoid infinite loops in bi-directional relationships, a CYCLE clause must be specified between RCTE and final select statement. As soon as a cycle is detected the appropriate flag defined in the CYCLE clause is set and the recursive query process for the branch is stopped.

The following figure shows the structure of an RCTE for querying recursive data. 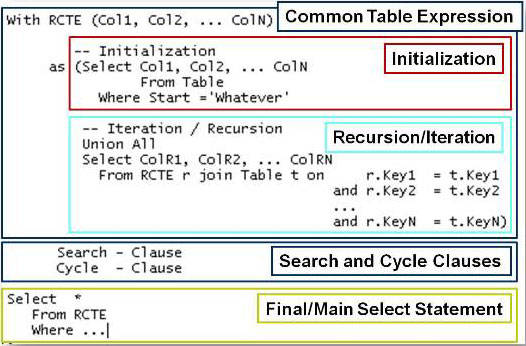 In the next example, a RTCE is used to return all subordinates of manager Bauer (not only those on the next level).

In the initial SELECT statement, the level is fixed to 1 and the name of manager Bauer is hardcoded in the WHERE clause, to predefine the starting point.

On the iterative select statement, the RTCE STAFFLIST is joined with the table STAFF by comparing the employee number (Column EMPLOYEE) out of the RCTE with the supervisor number (Column BOSS) out of the table STAFF. The level value is increased by one on each recursive iteration of the data. Additionally, the SEARCH DEPTH FIRST clause is specified. The temporarily created field SORT is used within the ORDER BY clause, to get the result returned in the depth-first sequence.

The hierarchical query clause is not implemented as common table expression, but the clause is specified as part of a sub-select and must be specified after the WHERE, GROUP BY or HAVING clause.

The following example shows a SELECT statement with a hierarchical query clause to return all direct subordinates for the manager Meier (employee number 101).

You may be disappointed because this kind of query easily could have been done with a simple WHERE clause, i.e., WHERE BOSS = 101.

In the following example, all subordinates (not only on the next level) for manager Bauer (employee number 202) are returned. In the first statement, PRIOR is used to the left of the equal sign while in the second statement it is specified on the other side. Both statements return the same result.

If the join key is a composite key, each key column must be prefixed with the PRIOR operator:

Even though the data in the previous query is returned in search depth first sequence there is no specific order among the siblings, neither on the employee number 405, 404, 403 nor on the name Hund, Schmidt, Jäger.

Adding an ORDER SIBLINGS BY clause which is only allowed in composition with the hierarchical query clause and will return the siblings in the predefined sequence. Like in a regular ORDER BY clause multiple columns can be specified in either ascending or descending sequence.

In the next example, the previous query is modified, by adding an ORDER BY SIBLINGS clause to get the siblings in the result sorted by NAME. Previously Becker (employee number 303) was returned first, while in the modified query Ackermann (employee number 304) is returned in the first place and the subordinates Hund, Jäger and Schmidt are listed in alphabetical sequence, too.

In the previous examples, the first column (i.e., the top manager) was specified as constant value. Hard coding or even worse duplicating hardcoded values (BOSS in Select and Start with clause) is never a good idea. And as soon as several starting points (e.g. multiple managers) are defined the hardcoded workaround will no longer work.

To avoid hard coding and duplicating hardcoded values, the CONNECT_BY_ROOT operator can be used, which always returns the value of its argument as it was during the initial step.

The pseudo column LEVEL can be used in the ORDER BY clause to return the result set in search breadth first sequence.

The pseudo column can not only be used to detect cycles but also to exclude them from the result.

In the following example, the pseudo column LEVEL is specified on the select list. The pseudo column value is also used to sort the query results in breadth-first sequence.

The scalar function, SYS_CONNECT_BY_PATH, can only be used in composition with hierarchical queries. It builds a string containing all elements from the root to the current row. The result of the function is returned as a CLOB (Character Large Object) data type that can hold up to 1 MB of data.

In the following example, all flight connections between Frankfurt and Berlin are shown.

The keyword NOCYCLE specified within the START WITH … CONNECT BY clause is required because of the bi-directional data. Connections that result in a cycle are eliminated by specifying the pseudo column CONNECT_BY_ISCYCLE in the WHERE clause.

Based on the pseudo column LEVEL a maximum of two connections (LEVEL <= 3) is returned.

Because the starting point is not checked for cyclic data and ‘Frankfurt’ must not be connected again, it is eliminated in the CONNECT BY clause (Arrival <> ‘Frankfurt’).

The departure (always Frankfurt) is determined with CONNECT_BY_ROOT and concatenated with the string, generated by the SYS_CONNECT_BY_PATH function that concatenates all ARRIVALs from all iterations separated by a dash (‘ – ‘).

Unfortunately SYS_CONNECT_BY_PATH can only be used for concatenating character values. Sometimes you would like to concatenate numeric values – for example, calculating the total costs of the flight connections.

The bad news is that there is neither a special function nor an operator for doing it directly in composition with the hierarchical query clause. The good news is there are two ways to achieve this objective, i.e., to calculate the total costs:

UDF to calculate the Formula passed as String

The SYS_CONNECT_BY_PATH function can only be used to concatenate strings (i.e., it cannot be used to calculate totals).

In SQL programming, a string containing any (mathematical) formula can be converted into an executable SQL statement with the SQL command PREPARE. This dynamically prepared statement can be executed using the SQL command EXECUTE.

The following SQL script contains the source code for creating the Calculate user-defined function (UDF). This UDF expects a Character Large Object (CLOB) containing a mathematical formula (for example 3+5*17) as an input parameter. This incoming parameter value will be embedded in another string to get the result of the formula calculated and returned.

The VALUES statement provides a method for executing a SQL statement without accessing a table or view. The VALUES … INTO statement allows an SQL expression to be executed and to return the result into variables. The ? (question mark) literal in the statement string is a parameter marker that represents the variable in which the result is returned.

The complete string (i.e., the incoming formula embedded in the VALUES … INTO, VALUES combination) is converted into an executable SQL statement using the SQL PREPARE statement. The prepared statement is executed with the EXECUTE statement. The variable to retrieve the result, RtnVal, is associated with the parameter marker in the USING clause.

If an error occurs, i.e., the formula contains invalid data, a continue handler will be activated and a negative default value (-999999999999.99) will be returned.

As soon as the UDF is generated it can be used in composition with the function SYS_CONNECT_BY_PATH to calculate totals.

In the following example, the column LISTPRICES shows the string with the concatenated costs separated by a + (plus) sign. To display the result in the Cost column, this concatenated string is passed to and processed by the Calculate UDF.

You should now be able to create all kinds of recursive queries with either hierarchical or bi-directional relationships using:

Additionally you should be able to use a UDF in composition with function SYS_CONNECT_BY_PATH to calculate totals within recursive relationships.

And now have fun experimenting with hierarchical query clauses.