The most powerful, most flexible, and most scalable generation of IBM Power Systems servers ever

After spending 4 years in the making, IBM has released IBM i 7.2 and POWER8 at last. How will this article be different and why would you want to read it? Well, maybe for the same reasons that I decided to write it. Let me explain.

I’ve been with IBM for almost 20 years, most of it behind the scenes as a developer of IBM i LIC, the foundational code of IBM i that implements the technology-independent machine interface (TIMI) for the OS and applications. Yet, this is my first foray into writing for IBM developerWorks. “So why now?” I’m glad you asked. IBM i 7.2 and POWER8 are the result of the inspirations and innovations of thousands of talented and dedicated IBMers around the globe. With the general availability of IBM i 7.2, the excitement and enthusiasm around the IBM development lab are palpable. Like many of my colleagues, I derive satisfaction in knowing that these new Power Systems servers with POWER8 technology and IBM i 7.2 can quietly serve millions of people throughout the world, once again raising the bar for performance, reliability, and value. Sometimes, silence is golden, but right now I would like to tell you about some capabilities and features that have been part of my world for the last 4 years of development. I invite you to join me: Welcome to the world of IBM i 7.2 and POWER8!

Both IBM i 7.2 and IBM i 7.1 Technology Refresh 8 are supported on the new Power Systems servers with POWER8 technology. The operating system and most applications for IBM i are built on a TIMI that isolates programs from differences in processor architectures, and allows the system to automatically capitalize on many new IBM Power Architecture® features without changes to existing applications. The new IBM i 7.2 release continues the tradition, providing a high degree of integration, security, and ease-of-use across multiple generations of IBM Power Systems servers and processors, including the new POWER8 processor.

Similar to previous generations of Power Systems servers, POWER8-processor based systems are designed to scale-up to support workload growth requirements, and also to serve as workload consolidation platforms. This is made possible through logical partitioning and virtualization with hardware, hypervisor, and operating systems that are optimized for these dual roles. As this article unfolds, terms such virtual processor and processor compatibility mode will be used. So, if you are unfamiliar with the IBM PowerVM® processor virtualization concepts, you may want to take a detour and review Processor Virtualization 101. 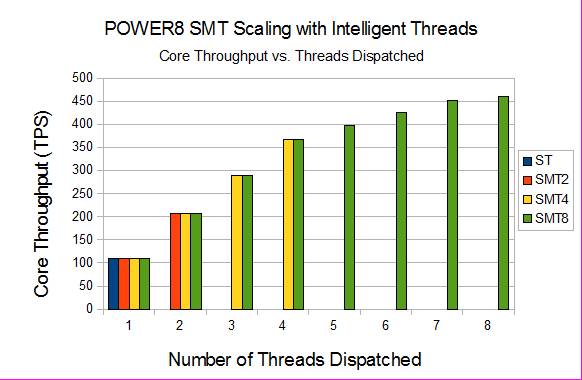 The choice of SMT4 for POWER8 in IBM i 7.1 TR8 was made for the benefit of clients migrating from an earlier generation Power Systems server. Many users upgrading to POWER8 will be moving their workloads from a POWER7 server using SMT4, while continuing to use IBM i 7.1 for a period of time. The choice of SMT4 as the default thread context for POWER8 in IBM i 7.1 TR8 offers most of the benefits and performance advantages of POWER8, with the familiarity and continuity of SMT4.

Switching to and from the single-thread context can be accomplished using the IBM i processor multitasking mode system value, QPRCMLTTSK. For POWER8, QPRCMLTTSK changes are effective immediately and persist across partition IPL.

Supported QPRCMLTTSK values are as follows:

The QWCCHGPR API takes a single parameter, the maximum number of secondary threads per processor:

The QWCCHGPR API might be called from a command line.

IBM i uses the TIMI to isolate programs from differences in processor architectures, and allows the system to automatically capitalize on many new Power Architecture features without changes to existing applications. In some cases, the IBM i operating system enables new features based on the processor compatibility mode of the partition. We’ll take a look at several POWER8 examples in the following sections.

Live Partition Mobility (LPM) is a PowerVM feature that provides the ability to migrate an active or inactive IBM i partition between Power Systems servers. IBM i support for LPM was introduced for POWER7 processor-based servers in IBM i 7.1 TR4.

Virtual time base and instruction count

POWER8 provides new hardware facilities for thread-level instruction count and virtual processor timekeeping. Because these facilities are not available on POWER7, and the partition could find itself running on a POWER7 processor-based server using Live Partition Mobility, the operating system provides new Instruction Count (IC) and Virtual Time Base (VTB) data only for partitions running in the POWER8 processor compatibility mode.

The IC and VTB facilities are relatively straightforward. The IC is the count of POWER instructions run by a hardware thread, and the VTB is the elapsed time of virtual processor (core) dispatch for a hardware thread. Both are privileged, that is, they are not directly accessible to application programs, but accumulated forms of them are provided by the operating system. The accumulation of IC and VTB for a software thread follows directly from the POWER8 thread IC and VTB registers. The accumulation of processor non-idle IC and VTB is somewhat less direct, occurring if and only if any of the processor’s threads is not idle, that is, running a program. IBM i 7.2 accumulates IC and VTB for each software thread and process, and non-idle IC and non-idle VTB for each processor, and partition-wide. Processor IC accumulation is also performed according to some other categories, such as interrupt IC.

For the programmer, the IC and VTB accumulations are available from a variety of IBM i 7.2 machine interface instructions including:

IBM i 7.2 performance management tools have been updated to incorporate IC and VTB accumulations. For example, collection services also include the process / thread IC and VTB data in the QAPMJOBMI file, and the sum-of-processor IC and VTB data in the QAPMSYSTEM file, making longer-term historical analysis possible without adding significantly to data collection costs. For more detailed analysis, Performance Explorer (PEX) includes thread IC and VTB in the base event data, which can be traced down to a very short timescale.

On POWER8, IC and VTB accumulations provide valuable diagnostic insights into the individual process/thread and overall system performance. They can be used alone or in combinations. For example, the non-idle processor VTB and IC were designed to provide a 24×7 proxy of processor cycle and instruction metrics that are frequently used for monitoring overall system health. On earlier generations of IBM Power servers, this data was available only when a PEX data collection was active.

IBM i 7.2 leverages the enhanced POWER8 vector processing capabilities to accelerate AES cryptographic operations when operating in the POWER8 processor compatibility mode. Cryptographic services APIs, SSL, VPN, Backup Recovery and Media Services (BRMS) tape encryption, and SQL encryption functions automatically use POWER8 enhanced vector processing capabilities to deliver significant increases in performance. Figure 2 exemplifies the gains resulting from POWER8 cryptographic acceleration. The charts reveal relative encrypt and decrypt throughput for Cipher Block Chaining (CBC) and Electronic Code Book (ECB) modes using an internal version of IBM CryptoLite for C/C++ (CLiC) toolkit primitives. In each chart, the series labeled “Vector” use the POWER8 vector accelerated implementation, whereas, the others do not. As shown, performance gains are dependent on the modes and block sizes, and results do vary, but POWER8 vector acceleration can deliver breakthrough levels of cryptographic performance for some applications. 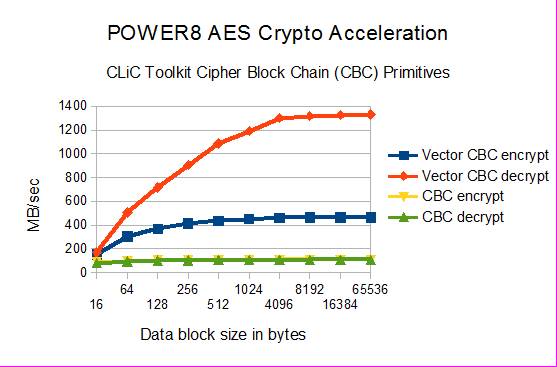 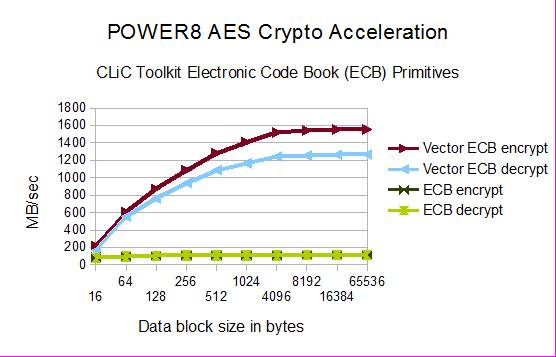 In this article, we’ve taken a closer look at some of the capabilities and features that have been part of my world for the last 4 years.

Welcome to the world of POWER8 and IBM i 7.2, the most powerful, most flexible, and most scalable generation of IBM Power Systems servers ever.

Mainframe a La Mode: Galasa -- Integration testing for IBM Z and beyond