Utilize JSON information with IBM DB2 for i

JSON_TABLE is a powerful function that enables the easy decomposition of JavaScript Object Notation (JSON) data into relational format. After providing a brief overview of JSON, the article explains the four types of database columns that can be defined using JSON_TABLE and provides examples of using JSON_TABLE to retrieve JSON objects from the web and process that information in relational form. Following these examples, database users can easily import JSON data into their relational database.

A popular format for information interchange on the internet is JavaScript Object Notation, commonly known as JSON. One reason for the usage of JSON is its tight integration with JavaScript, which is supported by web browsers and used widely to implement web applications. Furthermore, many information sources on the web provide data in the JSON format, allowing JavaScript and other applications to consume that data. Recognizing the importance of JSON as an information interchange format, the latest version of the SQL standards includes SQL language elements which work with JSON. One of the most powerful language elements is JSON_TABLE, which converts a JSON object into a relational table. This allows JSON information to be easily consumed by database applications, without the need to write a program to parse the JSON text.

This article begins by briefly describing the JSON format. It then explains SQL/JSON path expressions, which provide the means to locate information within JSON objects. The article then explains the different types of column information that can be extracted using JSON_TABLE. Finally, several examples of the use of JSON_TABLE in DB2 for i are illustrated.

The JSON data interchange format has been standardized by Ecma International and the standard is available at http://www.ecma-international.org/publications/files/ECMA-ST/ECMA-404.pdf. The primary structural unit of JSON is the object and a JSON object is represented as a list of key-value pairs. These key-value pairs are separated by commas and enclosed within curly braces. In a key-value pair, a colon separates the key from the value. Listing 1 shows a simple JSON object representing a person’s name. In this object, the key-pairs are "first"and"John","middle"and"K", and "last" and "Doe".

The key of a key-value pair must be a string, which is a sequence of Unicode characters surrounded by double quotes.

The value of a key-value pair can be one of the following:

In JSON, a number is a signed decimal number that may include an exponent using the exponential E notation. A boolean value is either the special value true or the special value false. The special value null indicates an empty value. A JSON array consists of a list of values, separated by commas, within enclosing brackets. Listing 2 shows a simple JSON array which contains the strings "red","green", and "blue". 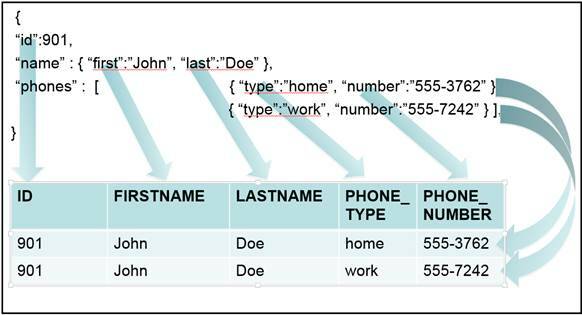 When extracting relational information from a JSON object, there must be a way to specify where the information can be found in the JSON object. In JSON_TABLE, this information is specified using an SQL/JSON path expression. An SQL/JSON path expression is a list of directions to find one or many values within a JSON object. Informally, this list contains directions to start with the current object, to look inside an object, to look inside an array, or to look for a value associated with a key.

In SQL/JSON path expressions, the following directions have an associated syntax:

Consequently, the SQL/JSON path to extract the first phone number is ‘$.phones[0].number‘.

More formally, the syntax diagram for an SQL/JSON path expression is shown in Figure 2. An SQL/JSON path expression can optionally begin with a mode. If a mode is not specified, then lax is used. The path begins with the dollar symbol ($) to indicate the current JSON context. Then, accessors to find a key-value with an object or an array specifier are used. The member accessor ".*" means to access all values in the object and the array specifier "*" means to access all values in an array. When referencing the values in an array, the elements to be accessed can be explicitly stated. For example, elements at indexes 0,1,3 can be accessed. Alternatively, a range of elements can be specified using the keyword to. For example, 0 to 3 can be used to access elements 0, 1, 2, and 3. In SQL/JSON path expressions, the first element of the array is found at index value 0. 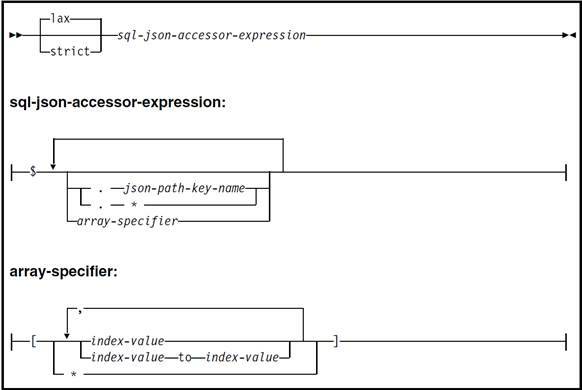 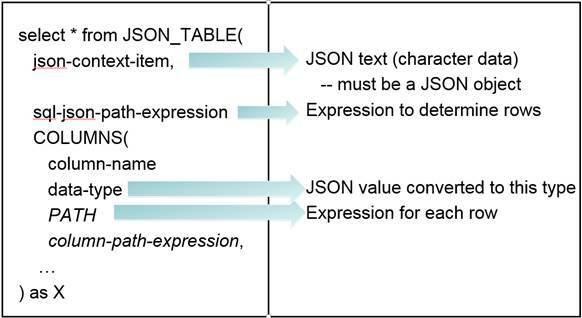 In this syntax, the table function name, JSON_TABLE, indicates that JSON_TABLE is to be called. The first parameter is the json-context-item, which usually is a character string containing a JSON object. DB2 for i also supports passing a binary large object (BLOB) field which contains a JSON object in the Binary JSON (BSON) format. This format was used by the previous DB2 JSON store. If the DB2 JSON store was used to store BSON objects into the database, these objects can now be consumed by JSON_TABLE.

The second parameter of JSON_TABLE is the sql-json-path-expression. This is the top-level expression that indicates which elements of the JSON object should be used to produce output rows in the resulting table. Within this expression, the beginning ‘$’ symbol represents the json-context-item.

The third part of JSON_TABLE indicates which columns should be produced. Each column has a column-name and a corresponding data-type. The path to find the requested JSON element is specified using the keyword PATH followed by an SQL/JSON path. Many columns can be specified with each column definition separated by a comma. In JSON_TABLE, specifying a column path is optional. If a column path is not specified, then a path of the form '$.column-name' is used. When using this feature, it must be remembered that SQL/JSON paths are case sensitive.

Now that we have a JSON object, we can use JSON_TABLE to extract values from that JSON object into relational data. Listing 6 shows a simple use of JSON_TABLE. In this example, a SELECT statement is used to invoke JSON_TABLE and return all the columns that it produces. The global variable JSON_VAR is used as the JSON input to JSON_TABLE. In this example,'$' is used as the outermost SQL/JSON path expression, which means that the column definitions will use the existing JSON object as their context item. Because '$' only references one item in the object, this use of JSON_TABLE will only produce one row. After the outermost SQL/JSON path expression, the columns are defined. The first column is named ID and has a type of VARCHAR(10). The SQL/JSON path to locate that value is 'lax $.id'. Similarly, this example has columns FIRST and LAST, which return the first name and last name within the inner JSON object referenced by the "name" key.

Running this query results in the table shown in Figure 4. From the JSON object, the id has been retrieved, as well as the first name and last name.

Listing 7 shows an example of using a nested column definition. As in the previous example, the context item references the JSON_VAR variable and '$' is used as the outer most SQL/JSON path expression. This query also returns the first and last name, as before. It then uses a NESTED column definition which has '$.phone[*]' as the SQL/JSON path expression. This expression directs JSON_TABLE to produce a row for each element of the phones array. For each object encountered in the array, column definitions are used to extract the "type" and "number" values for each phone number. In this example, these lower-level column definitions do not include a path. So, the default paths of the form '$.type' and '$.number' are used.

Figure 6 shows the result of running this query. Because there are two phone objects in the phone array, two rows are returned.

Listing 8 shows an example of using JSON_TABLE with an ordinality column. In this example, the column name is ORD.

Figure 8 shows the results of running this query. The result now has an ORD column with the values 1 and 2 for the two rows generated.

Listing 9 shows an example of using FORMAT JSON. In this example, we want to see the results of using various steps in an SQL/JSON path.

Figure 10 shows the result of running this query. The ALL column contains the JSON object, which is referenced by using '$'. The PHONES column reflects the JSON array corresponding to '$.phones'. The PHONE0 column returns the JSON object found in the first element of the phones array. Finally, the TYPE column contains the type of phone found within the first element of the phones array. Because FORMAT JSON is used and the result is a string value, the double quotes present in the original JSON object are also returned.

At the uppermost level of JSON_TABLE, the error handling behavior can be specified. This behavior is either EMPTY ON ERROR or ERROR ON ERROR. The default is EMPTY ON ERROR which means that an empty table (that is, a table with no rows) is returned when a table level error is encountered. The ERROR ON ERROR setting indicates that an error should be returned.

Listing 10 shows an example of using the ERROR ON ERROR setting. Note that the context path uses the strict mode to force the error. Figure 11 shows the resultant error.

Figure 11. Result of ERROR ON ERROR

For regular column definitions, the following six options are available to control the behavior when empty values are found or errors are encountered:

Listing 11 shows an example of using these settings and the corresponding output is shown in Figure 12. In this example, NULL is returned for the EMPTYCOL1 and ERRORCOL1 columns because the specified elements cannot be found. The use of strict mode in the path for ERRORCOL1 column causes the error to occur. For the EMPTYCOL2 and ERRORCOL2 columns, the specified 'EMPTY2' and 'ERROR2' strings are returned.

Listing 11. ON EMPTY and ON ERROR settings

Figure 12. ON EMPTY and ONE ERROR output 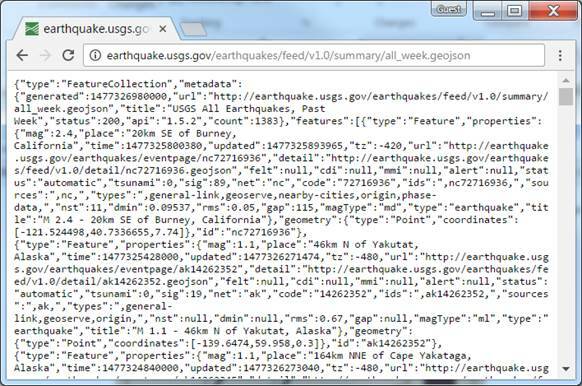 From this information, we want to get a list of the recent earthquakes with their report times, magnitudes, and location. This can be accomplished using the SQL statement in Listing 12. In this statement, the SYSTOOLS.HTTPGETCLOB function is used to retrieve the JSON object from the website. This object is then used as the input to JSON_TABLE. After the input value is specified, the path 'lax $.features[*]' is used to retrieve all the earthquake information stored in the array specified by the "features" key. We then define three columns to contain the information for the time (in milliseconds), magnitude, and place of the earthquake. The SQL/JSON path expressions used to locate this information are defined for each column.

The beginning of the result of running this query is shown in Figure 14. 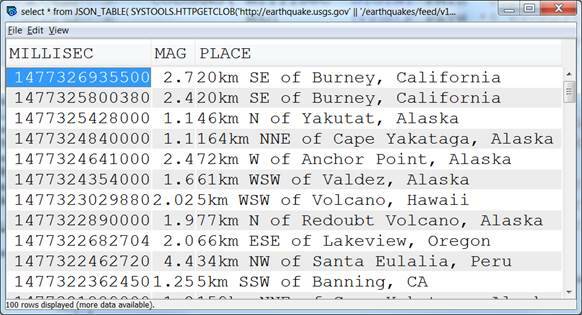 JSON_TABLE is a powerful tool now available to process JSON data on DB2 for i. By using SQL/JSON path expressions to locate information in JSON objects, JSON_TABLE can place that information into the rows and columns of database tables. In conjunction with HTTP functions, JSON feeds can be consumed using SQL and combined with traditional forms of relational data.