Ensure a safe and reliable operation of your Kubernetes instance

This article introduces some IBM best practices for implementing a Continuous Integration/Continuous Delivery (CI/CD) secure container image pipeline for your Kubernetes-based applications. This is a mechanism whereby any container images are first scanned for vulnerabilities and approved for use. This guarantees the security of your instance and of any containers that are subsequently instantiated.

Kubernetes offers you the flexible expansion of an application by using microservices, where individual containers incorporate specific parts of an application. Container numbers can scale rapidly and efficiently as your application expands and requires more resources. Container images can come from a variety of sources — some verifiable, some not.

Therefore, it is crucial for you to establish an appropriate security posture and a foolproof method of verifying the authenticity of container images before they are used in production. Failure to do so can result in serious security breaches and/or catastrophic failure of the applications in your Kubernetes instance! Using any such container image verification method should separate out any container images that are not fit for purpose, and ensure that only suitable and verifiable container images are used in your production environment.

One such method is the Continuous Integration/Continuous Delivery (CI/CD) secure container image pipeline. The pipeline detects any kind of current or historical vulnerabilities, or exposures in each container image — all of which depend on the container image contents, and accepts or rejects the images that you use in production on that basis. In a scenario where your container image OS is not fully updated, the pipeline ensures that the relevant updates are applied.

Only your container images that are fit for production are pushed to the private image registries that are in use by your Kubernetes instance.

This article discusses the current implementation and the best practices use of a Kubernetes CI/CD secure container image pipeline, and is targeted towards individuals who have a degree of knowledge of the containerization process.

What is the the definition of a Kubernetes CI/CD container image pipeline and how does it work?

In terms of the Kubernetes instance need-to-know access control/separation of duty paradigm, there should be a specific or minimal number of people that have privileged access to any application image (e.g., generate images, deploy images, or curate the image library). Furthermore, access control should be configured so that whoever creates a change cannot also approve it. There should be a “technical approver,” who is ideally a peer or technical team lead. These best practices prevent one individual from sabotaging or damaging your entire instance (e.g., creating an image and then deploying it). If your team size is insufficient to have such separate individuals, then your instance should have an authorized approver.

How does the pipeline determine that a container image is secure? 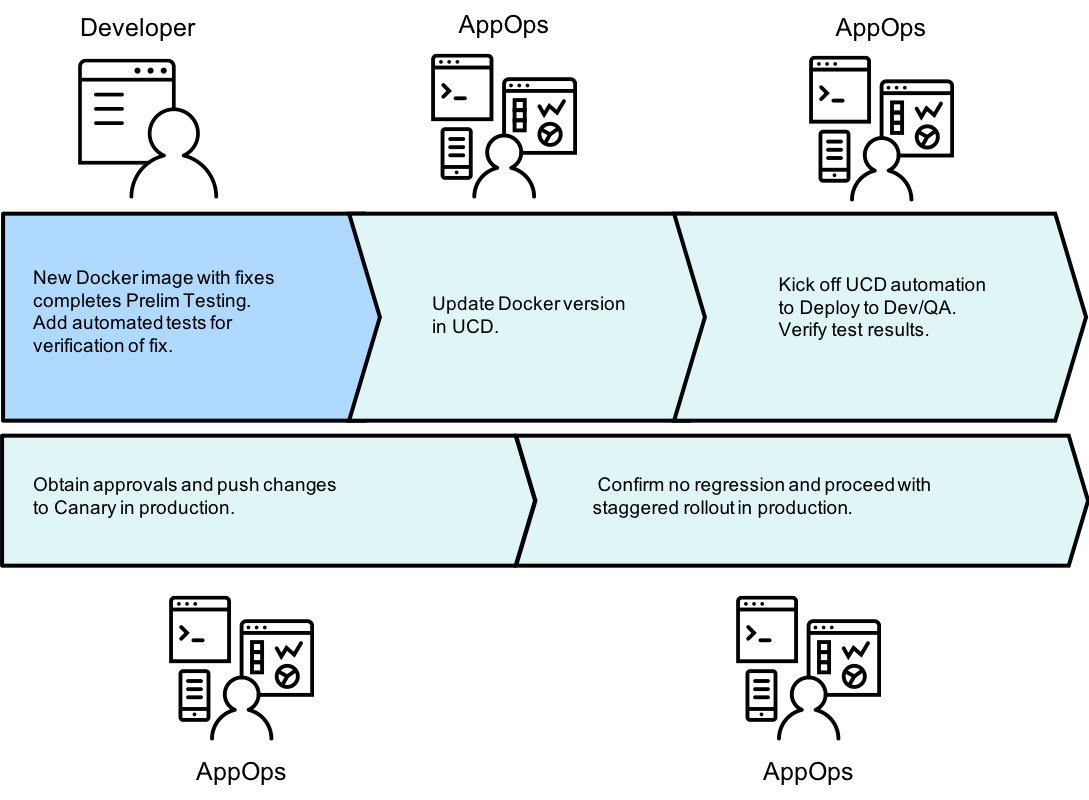 The infrastructure team deals with any infrastructural issues that arise out of your container creation and deployment processes.

The infrastructure team’s role is comprised of:

Use case 1: The container image is tested and considered suitable for use in the Kubernetes Instance Private Registry

Once a container image is considered suitable for use in your Kubernetes environment, the image is deployed into the production environment, using the same deployment methodology that is applied in other environments. Currently, the following application deployment process is in use:

All of the environments currently have Nessus scanning enabled. Kritis and image scanning within the Docker repository in the Artifactory are currently being examined. Continual security and functional testing runs against all your deployed containers in order to ensure the integrity of your Kubernetes environment.

When is the image suitable for production use?

Use case 2: The container image is tested and considered unsuitable for use in the Kubernetes Private Registry

Currently, an add-only image mechanism is generally practiced. Older images are not necessarily removed from the existing registry. Instead, a new image with all the necessary patches and security fixes is added and promoted through the CI/CD pipeline. Eventually, a proper process and mechanism to prune the images from the registry, or delete deprecated images will be considered, but this does not impact the CI/CD process in any significant manner. Since the Kubernetes manifests are managed in SCM (Supply Chain Management) and are generally identical across environments, any usage of older or unsecure images is caught very early in your validation process.

When is the image unsuitable for production use? The container image is considered unsuitable for use in your Kubernetes instance if security or application defects are discovered during the ongoing evaluation of the image.

Existing container image-testing products The below products scan container images that are located in private repositories, to verify that they are free from all known security vulnerabilities or exposures. The products then report the results of their scans to you.

Overall, the secure container image pipeline ensures the security and integrity of any Kubernetes containers that are instantiated in your Kubernetes instance. The security of your instance can be ensured by determining who can approve each image before submission to the image registry, and who can instantiate the image as a live container. This separation of duties between who approves the image, and who deploys the image, is key to ensuring that unsuitable or malicious containers are never in use.

The development, AppOps, and infrastructure teams work together seamlessly in a process that ensures that any approved container meets stringent standards at all times. UCD (Urban Code Deploy) is employed to move each container through each stage in this process, and also assists in configuring the monitoring of your container, so that the appropriate individuals are notified in the event of any container failure.

The combined structure and operation of this Kubernetes CI/CD secure container image pipeline and the best practices that accompany it, ensure a safe, reliable, and trouble-free operation of your Kubernetes instance. This is critical to observe in any high availability Kubernetes environment, where containers and their contents may be required to scale rapidly at any time to meet demand.

We recommend that you use a scanning mechanism for all your container images in your Kubernetes Private Registry, such as IBM’s free Image Scanning Service: http://imagescanner.bluemix.net/.

Grafeas and Kritis may be required to be deployed to your Kubernetes environments in the future. However, considering that the CI/CD pipeline leverages the TaaS (Testing as a Service) artifactory, it may be possible to leverage JFrog Xray and AquaSec to carry out container vulnerability scanning. Even though private registries in your Kubernetes environments may not necessarily have this artifactory, the artifactory is the single point that all container images pass through during the CI/CD process. So, it may be possible to reap all the benefits of security scanning, without necessarily having to install Grafeas and Kritis on every environment.

Best practices for deploying your apps in the cloud