Securing IoT data over the network

Internet of Things (IoT) solutions are complex networks of devices and sensors that collect and exchange data over networks and the cloud. With more and more data being exposed to more and more applications, security is a major challenge for IoT developers.

This series of articles focuses on security at the three architectural tiers of an IoT application: devices, data, and applications. Part 1 of this series introduces IoT security basics and then describes the various approaches for securing devices or gateways. Part 2 (this article) will focus on the security aspects of the network and transport tier, which includes the IBM Watson IoT Platform. Part 3 provides the security requirements for the application tier, and an implementation approach for an analytics IoT application that is created in the IBM Cloud platform.

Securing data over the network

You can read more about Transport Layer Security (TLS) in its specification standard.

Transport Layer Security (TLS) provides security for transferring data over the network. The data is encrypted to prevent anyone from listening to and understanding the content. TLS (also known as SSL) is widely used to provide secured access to many websites. TLS ensures that trust is established between the server and the client before data transfer happens. It does so by use of server certificates that clients must validate. In some cases, the server also validates client-specific certificates.

MQTT relies on TCP as the transport protocol, and by default the connection does not use encrypted communication. Although implementing TLS impacts performance of the data transfer and the load on the server, most MQTT brokers (including IBM Watson IoT Platform) support the use of TLS to enable applications to secure the exchange of sensitive data. Watson IoT Platform uses TLS as the default connection security setting for devices and gateways by using MQTT.

However, you can add additional security by having your IoT application encrypt the data that it sends and receives. For instance, IoT applications can use MQTT PUBLISH to encrypt data that they send. This implementation is particularly important for untrusted environments or insecure network connections among the devices and the MQTT broker.

If you are using the username and password fields of the MQTT CONNECT packet for authentication and authorization, you should strongly consider using TLS. Port 8883 is standardized for a secured MQTT connection.

Most deployments of MQTT use transport layer security (TLS), so the data is encrypted and its integrity is validated. IBM Watson IoT Platform supports TLS 1.2 for securing the data transported over the network. In this article, we describe how applications can provide additional security mechanisms by supporting the exchange of encrypted messages even when the underlying network may or may not support TLS.

Only the payload data (private sensor information) of the message needs to be encrypted. The message fields of MQTT PUBLISH messages are not changed. The payload information is binary, so no special encoding mechanism is required while it transmits the message. Also, no specific changes are required on the broker side because the MQTT message format remains the same. Only the application that is interpreting the message payload needs to decrypt the message to understand the content.

TLS provides security on the network layer while MQTT payload encryption provides security on the application layer, so they can be used in conjunction without conflict. MQTT payload encryption only solves the problem of protecting application messages from eavesdroppers or untrusted MQTT clients (if no authentication mechanism is in place). An attacker can still replay the message or modify parts of the message, such as the topic, if there is no secure communication channel over TLS.

As mentioned earlier, if you use MQTT over TLS, it impacts performance in terms of additional CPU usage and communication. While this performance cost is not significant for brokers, it can be a challenge for devices with limited resources. Here are some tested techniques for improving TLS performance:

You can download this sample code from the DeviceSimulatorDemo project in GitHub.

While Listing 3 shows how MQTT messages are encrypted before they are published to the topic, Listing 4 provides a sample encryption approach that is based on the AES method and that uses a secret key.

While Listing 5 shows how raw bytes that are read from the topic can be decrypted by the application when a message encryption approach is implemented, Listing 6 provides a sample decryption implementation based on the AES method.

Listing 5. Receiving and decrypting the message

Checking the integrity of a message

Digital signatures provide the most comprehensive method for verifying message integrity, but they do impact performance and require additional resources. While simple checksums are easy to implement and verify, MACs or digital signatures require more computation and should be used in appropriate scenarios – where either the underlying network is not reliable or the transmitted message requires extra security measures.

IBM Watson IoT Platform provides a REST-like API to support certain functions, including managing devices and accessing data that comes from devices. Access to the API is secured by using basic authentication in combination with HTTPS:

To authenticate API calls, you must create an API Key in Watson IoT Platform. Follow the step-by-step guidelines for creating an API key in this recipe.

The API key can then be used to call the API Client com.ibm.iotf.client.api.APIClient that can call IBM Watson IoT Platform APIs. Listing 7 shows how to create the APIClient instance. It reads the properties that are required to instantiate the API client from a property file.

The property file with sample values or instantiating APIClient is shown in Listing 8. You need to replace the sample placeholder values with your App ID, Org ID, created API Key, and authorization token.

Listing 8. Contents of the application.prop file

The following code sample in Listing 9 demonstrates how to retrieve all the devices in an organization by using the Java Client Library.

Listing 9. Retrieving all the devices in an organization by using the Java Client Library

The IBM Watson IoT Platform API can also be used to read historical data from the Watson IoT Platform message store. Devices can encrypt the payload and add additional checksum fields to protect the data. Figure 3 depicts the flow for this scenario. 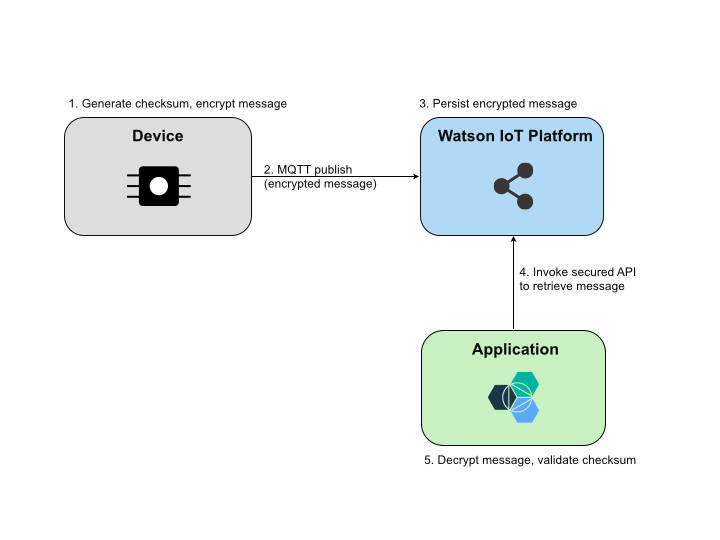 The following sections describe how to implement this scenario.

Device code: Encrypting the payload and adding a checksum field in message

The code below encrypts the payload and adds a checksum field in the message:

The application code below uses the Watson IoT Platform API to read the messages from the persistent store, decrypts the message, and validates the checksum to ensure message integrity.

The IBM Watson IoT Platform REST API expects a JSON structure in the message and persists it in a Cloudant database. It will not parse (and hence store) a fully encrypted message that is not in JSON format. Therefore, the binary encrypted data in the payload must be encoded because Watson IoT Platform will try to interpret the JSON. It’s not a valid JSON string if it is not encoded.

A good practice is to encrypt the payload and put it inside a JSON structure. In this case, the other fields of the JSON message can include checksum and time stamp.

The authors recommend that you use TLS for applications that deal with personal and sensitive data, such as patient records or vehicle data. In cases where the underlying network does not support TLS, or an extra level of security is required, consider payload encryption to ensure that device data is not transferred without any security. However, you need to remember that performance will decrease when you implement security mechanisms like encryption and checksum.