This article describes how you can set up a Broadcom MegaRAID SAS 9361-8i controller card and also describes its key features, based on which you can decide what configuration is best suited for your environment. Here, you can get an overview of the different backplanes that are used in OpenPOWER systems.

Overview of the MegaRAID-SAS 9361-8i controller card

Some of IBM OpenPOWER systems, both IBM POWER8® and IBM POWER9™ support MegaRAID-SAS 9361-8i controller cards. This article describes how to configure the card and outlines some of the main features of this controller card. Figure 1 illustrates the MegaRAID-SAS 9361-8i controller card. In the name, the letter i stands for internal. What this means is that you can connect this adapter to the internal backplane of a server. There are two types of backplanes for the OpenPOWER systems, with 12 disk bays. The difference between the two is that one backplane can support up to four NVMe disks and the other cannot support these disks. Figure 2 shows a typical backplane.

Link to the repository: https://github.com/avocado-framework-tests/avocado-misc-tests/tree/master/io/disk/Avago_storage_adapter 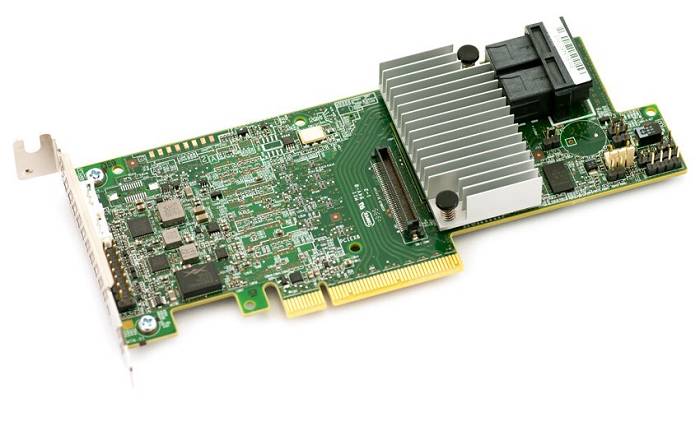 Key advantages of the MegaRAID-SAS 9361-8i controller card

RAID 0, also known as disk striping, is a technique that breaks up a file and spreads the data across all the disk drives in a RAID group. The benefit of RAID 0 is improved performance. RAID 0 is ideal for noncritical storage of data that has to be read or written at a high speed.

Disk mirroring, also known as RAID 1, is the replication of data to two or more disks. Disk mirroring is a good choice for applications that require high performance and high availability, such as transactional applications, email, and operating systems. RAID 1 is ideal for mission-critical storage, such as for accounting systems. It is also suitable for small servers in which only two data drives are used.

RAID 5 is a RAID configuration that uses disk striping with parity. As data and parity are striped across all the disks, no single disk is a bottleneck. Striping also allows you to reconstruct data during disk failure. Read and write operations are more evenly balanced in this configuration, making RAID 5 the most commonly used RAID method. RAID 5 is a good all-round system that combines efficient storage with excellent security and decent performance. It is ideal for file and application servers that have a limited number of data drives.

RAID 6, also known as double-parity RAID, uses two parity stripes on each disk. It allows two disk failures within the RAID set before any data is lost. RAID 6 is a good all-round system that combines efficient storage with excellent security and decent performance. It is preferable over RAID 5 in file and application servers that use many large drives for data storage.

Once installed, you will see the tool in /opt/MegaRAID/storcli. This tool is a binary file that you can run from any location. Before running the tool set executable permission for the tool using the following command:

After you run this command, you can use the tool. The following are the basic commands from which you can run different operations on the adapter.

Refer to the following (example) output:

Refer to the following (example) output:

Starting the rebuild operation and monitoring the progress

Output similar to the following is displayed:

Output similar to the following is displayed:

Similarly, you can perform other operations. Run the following command to view information about the supported operations on this controller card.

The MegaRAID SAS 9361-8i controller card also has the following features:

Podcast: COBOL development on the mainframe