In a previous article, we showed you two mechanisms for implementing off-chain logic that maintain trust, visibility, and transparency as qualities of service for a blockchain network. The first approached extended smart contracts by having peers in the blockchain network invoke third-party services collocated with them, while the second approach extended smart contacts by having these invoke a third-party trusted service that resides outside of the blockchain network. These third-party trusted services are commonly referred to as oracles. In this article, we explore the second approach further by presenting three common architectural patterns that can be used in the context of a Hyperledger Fabric network.

You should probably allocate about 10-15 minutes to read this article.

Origins of the oracle

The word “oracle” originates with the Latin word “oraculum,” which means divine announcement. In ancient times, such announcements were delivered by these so-called oracles, and because they were considered divine everyone tended to trust them. No matter how events turned out, people did not usually doubt oracles, preferring instead to assume that their own interpretation may have been faulty. Oracles were clever people who always made sure that their prophecies had enough room for interpretation. What makes the oracle concept interesting and applicable to blockchain is that the trust people placed in their oracle stemmed from the fact that once the oracle made a prophecy, they could not easily change it. Changing a prophecy after the fact would essentially render an oracle as a fraud.

From a blockchain perspective, an oracle can be expressed as a function, which given a tick value will always return the same fact along with a proof of the fact:

Figure 1. Expressing an oracle as a function

Returning the same value for the same input is great from a blockchain perspective! This means you get a deterministic function that can be safely called from a smart contract (at least in theory).

Legal and business implications of oracles

It’s worth noting that while the remainder of this article is focused on architectural patterns that support the integration of oracles, there can be serious business and legal ramifications to the use of oracles. Will every party truly trust the oracle? What about situations where parties disagree on the value? As such, the inclusion of an oracle in a blockchain network should be addressed and reflected when defining the trust framework. Terms and conditions should clearly spell out that members of the network recognize the validity of the external system, and should also cover the dispute process.

Looking at the oracle patterns

Now that we have a basic understanding of the concept of an oracle, and understand that this is not only about technology but it needs to also encompass business and legal aspects, let’s turn our attention to three architecture patterns that can be implemented on top of Hyperledger Fabric.

Hosting an oracle on a global channel

This is probably the most natural way to implement the concept of an oracle within Hyperledger Fabric. Essentially, this approach relies on the concept of having an organization (the data source org) in the network be responsible for maintaining a ledger of “facts” that other organizations can query to retrieve a point-in-time value. Figure 2 depicts a smart contract that is deployed on a global channel and provides an update and a query transaction. In this model, only the data source org is authorized to invoke the update, and the other organizations are allowed to invoke the query.

When invoking the smart contract on a separate channel, the smart contract can leverage the cross-channel query capability to retrieve the latest value. The fact that the value is recorded on the ledger provides an auditable trace of the fact. 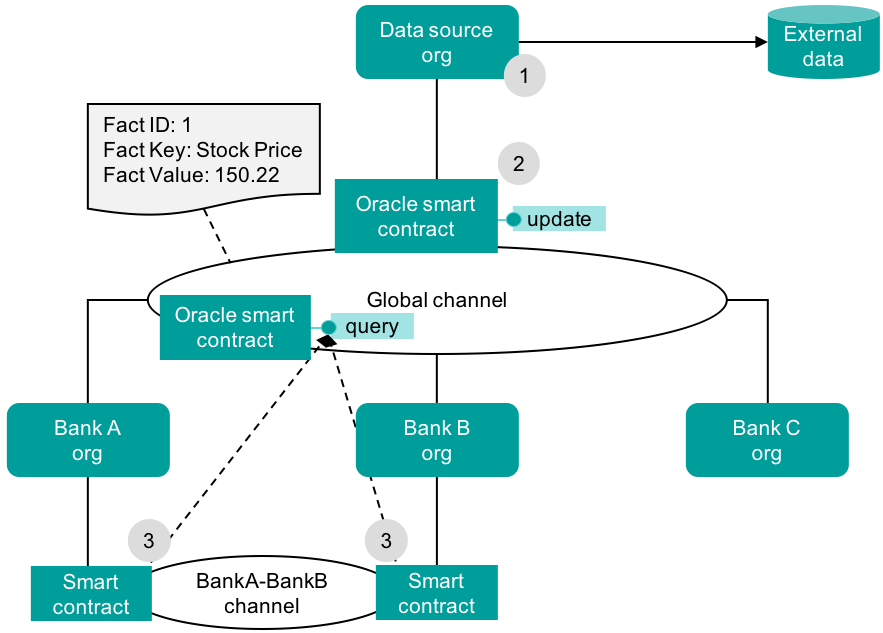 The tick parameter is stored as the key within the ledger and the facts are the value part of the key-value. The proof of the fact is essentially the transaction that is stored on the ledger containing the data source organization signature.

In this architectural pattern, the data flow starts with the client application submitting a transaction proposal to the blockchain network as shown in Figure 3. As with any transaction proposal in a Hyperledger Fabric network, this results in the invocation of a smart contract. As you may know, it is the responsibility of the client application to ensure that the transaction proposal is sent to the necessary organizations/membership service providers (MSPs) as specified in the endorsement policy. In addition, an endorsement policy may require peers from several organizations to execute the smart contract in order to achieve consensus.

As a side note, with the release of Hyperledger Fabric v1.2, client applications will no longer need to hard code the organizations/MSPs to which transaction proposals must be sent. Instead, they can leverage a discovery service to compute such information at run time. (For more details, see the Fabric docs.)

Regardless of which mechanism the client application uses to submit a transaction proposal, it is unaware that the smart contract may invoke an oracle service during its execution. 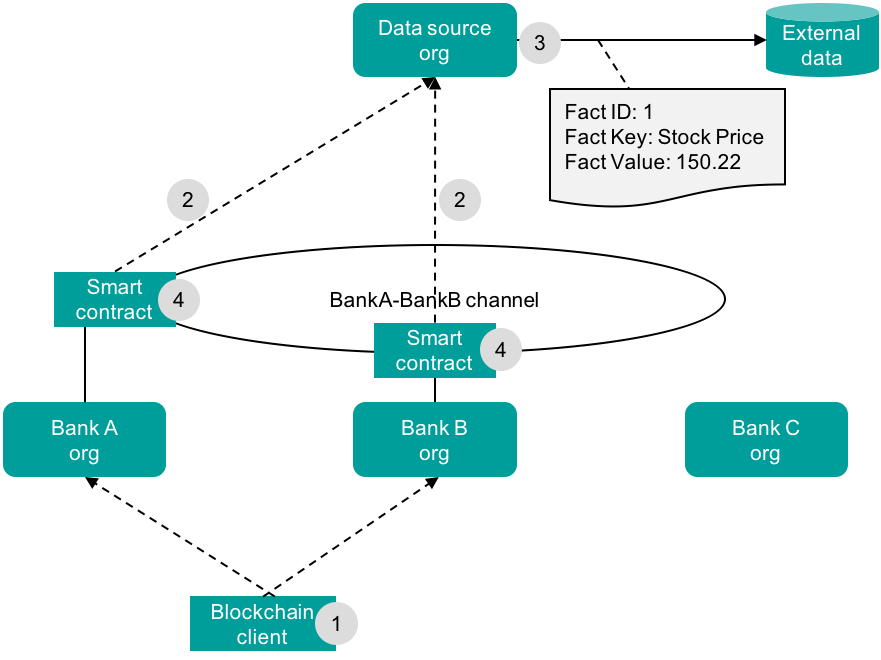 In Figure 3, the oracle service is depicted by the data source org component, which resides outside of the blockchain network. During the execution of the smart contract (which, as mentioned earlier, occurs during the transaction proposal phase), all endorsing peers invoke the data source org service in order to obtain the necessary data before consensus can be achieved. The data source org service has access to any data repositories and/or additional services it may need to engage in order to provide a deterministic answer to each smart contract invocation from the blockchain network. There are two possibilities:

In the second case, to guarantee determinism across all invocations that occur within the boundaries of a same transaction, a unique representation of the specific transaction is provided as input to the oracle service from the smart contract. This identifier allows the data source org service to correlate requests that are bound to the same transactional context, and thus ensure consistency in its response to the smart contract.

Note that the oracle service should gather any necessary data and make any required computations for building its response without introducing significant latency to the transaction. Otherwise, the blockchain transaction proposal could timeout, which would result in a failure and, consequently, consensus wouldn’t be reached. Also, in this architectural pattern, organizations must allow their endorsing peers to establish outbound connections from the Fabric network to an external resource — in this case, the data source org service.

Verifiable credential as source of facts

Before discussing this architectural pattern, we should first go over the following concepts:

This scenario is depicted in Figure 4. 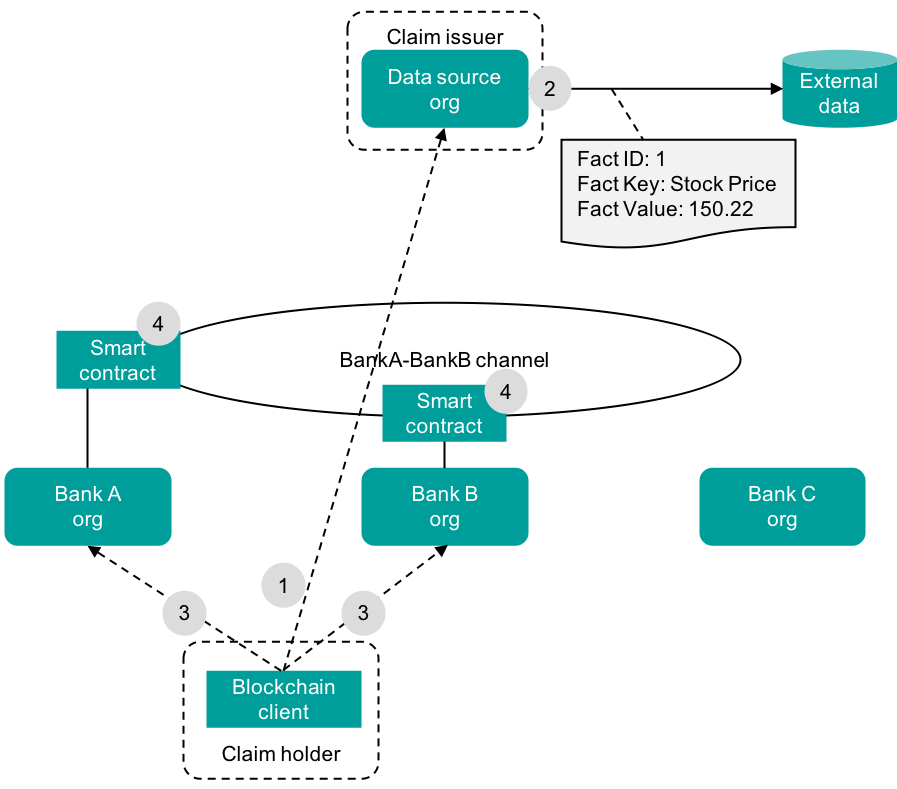 There are a couple of ways this can be done…

2. Holder of the verifiable claim provides proof of non-revocation to the inspector-verifier

The second option relies on the concept of a cryptographic accumulator and the fact that revocation lists can leverage that concept and the accumulator can be stored on the ledger. By avoiding contact with the issuers, the holder’s privacy is protected and the inspector-verifier can quickly assert the validity of the credentials. For more on the concepts behind this approach, read How credential revocation works.

Therefore, in the context of the architectural approach described in this section, a credentials issuer plays the role of an oracle by indirectly providing a verifiable credential to the smart contract.

In this article, we showed you three different architectural patterns that extend smart contacts by leveraging a third-party trusted service, which acts as an oracle. In the first approach, the trusted party service has a membership in the blockchain network and utilizes a channel to make its data available to all members of the network. In the second approach, all members of the blockchain network agree to trust and leverage a third-party service by making invocations to it from within the smart contracts. In this context, data inputs to the third-party service are used to correlate invocations that occur within the same transaction and, thus, guarantee determinism. In the third and final approach, a claims issuer serves as the oracle by issuing verifiable credentials to entities, which are then corroborated during the execution of smart contracts. Client applications provide the necessary claims as inputs to smart contracts, and these then validate the authenticity of such claims by verifying the signatures.

Finally, please be aware that the inclusion of a third-party data source into a business network is not trivial. You should consider the impact it can have on the governance model and the additional technological dependencies it can introduce to your solution.