In this article, Masanori Mitsugi of IBM Systems Lab Services and Yoshikazu Kugii of IBM Technical Sales introduce Power10 Functional Simulator, which is a simulator environment for Power10 processor.

What is Power10 Functional Simulator?

The Power10 Functional Simulator works with the stack as shown in Figure 1.

To set up the Power10 Functional Simulator, install rpm or deb package after downloading on Linux, and then install various images (firmware, Linux kernel, and Linux disk) by following the procedure in the user guide and the README file (/opt/ibm/systemsim-p10/examples/linux/README). After installing the images, you can start the simulator in the X Window System environment. (X Window System is required because xterm and tcl interfaces are used in the simulator). A helper application called callthru is available in the simulator to exchange files between the host and the simulator. 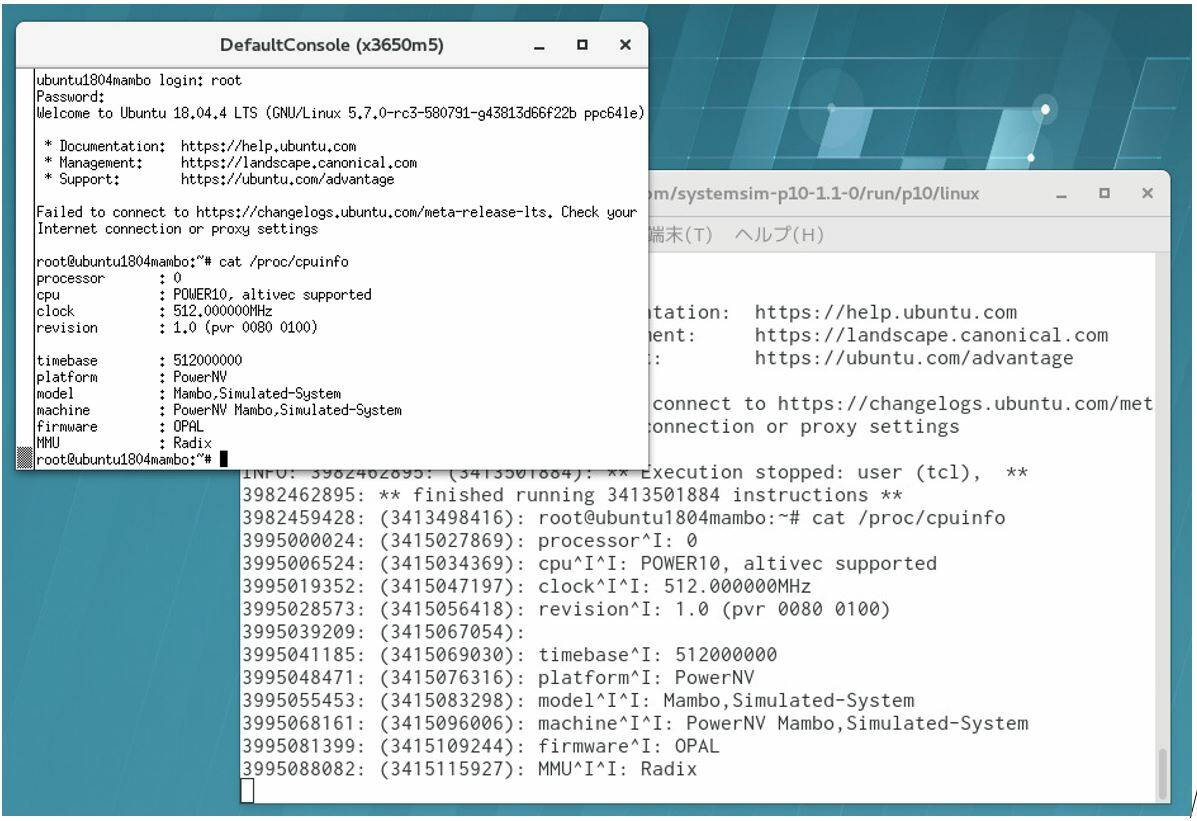 Because the Power10 Functional Simulator is a simulator environment for Power10 processors, it is possible to check new Power10 instructions. Power10 support for the LLVM or GCC compiler and the Linux kernel has already been published and is supported by relatively newer versions of the compiler and kernel. The Linux image of Functional Simulator also includes a kernel and compiler for Power10. A compiler called Advanced Toolchain is available, allowing you to try out new features for Power processors with better tuning than GCC’s mainstream compiler. This section explains some new instructions that you can try using these compilers.

Let’s check how it works on the Power10 Functional Simulator with an example code (GCC test code).

In this way, Power10 makes it possible to write programs with fewer instructions. Furthermore, in addition to this prefix instruction, Power10 has an enhancement called instruction fusion that allows two instructions to be executed together as one micro operation in the decoder, and therefore, it is possible to operate at high speed even for programs other than those compiled for Power10.

Four dedicated hardware units are installed for each CPU core on Power10, which enables high-speed processing of matrix outer product operation A ← {±}A {±} XYT. In addition to double precision and single precision as shown in the following figure, Bfloat half precision and Int4 operation are also supported. These make it possible to run AI inference workloads more efficiently and quickly without an extension card such as a GPU. 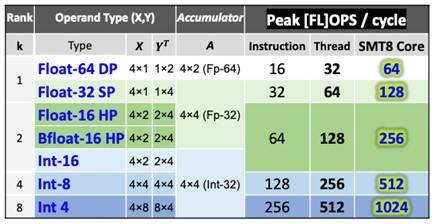 For full utilization of four MMA dedicated units for each core, the read/write bandwidth of memory and L3/L2/L1 cache has also been redesigned in Power10, and each has double the bandwidth compared to Power9. 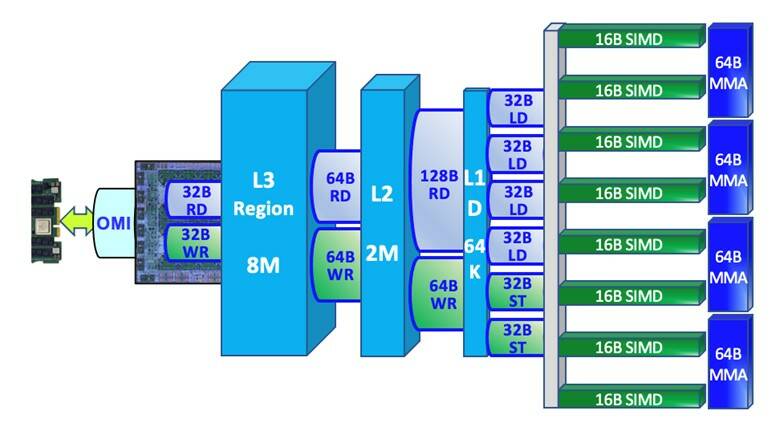 As an example, a single precision 4×4 matrix product described by the built-in instructions of the compiler will be as follows.

With regard to creating and executing programs using MMA instructions, the IBM Redbooks publication, Matrix-Multiply Assist Best Practices Guide, has been released. Refer to it for more details of various codes, and note that all the code can be run on the simulator.

In addition to optimized libraries, deep learning frameworks such as TensorFlow and PyTorch can also be accelerated by MMA instructions by using Eigen for TensorFlow and OpenBLAS for PyTorch internally. MMA optimization for other runtimes such as Open Neural Network Exchange (ONNX) is also underway.

In this article, we have briefly introduced the overview, usage, and examples of Power10 Functional Simulator, which allows you to quickly try out Power10 instructions. Now that the Power10 server is released, we plan to publish detailed information such as performance information as needed, so look forward to it!

Finally, the creation of this article was supported by many IBM members: Vincent Lim, the lead of the Power10 Functional Simulator development team, Kazunori Ogata and Kazuaki Ishizaki of IBM Tokyo Research Laboratory, Hiroyuki Tanaka and Tamara K Deedrick of IBM Lab Service. And we would like to thank all the members of the Functional Simulator team who are involved in the development.