Tools for converting programs and modules on IBM i

Program conversion happens automatically if a program is moved to another IBM i system that does not support all of the processor features used by the program. For example, to implement a sequence of instructions, a program may use hardware features available on the current processor. If this program is moved to an earlier version of the processor that does not support those specific hardware features, the program must be converted so those features can be implemented in a different way (but still correctly). Note that automatic conversion does not happen if moving a program in the other direction. If a program runs correctly on an earlier version of the processor, it will run correctly on a later processor due to forward compatibility. See Figure 1. Automatic conversion example. 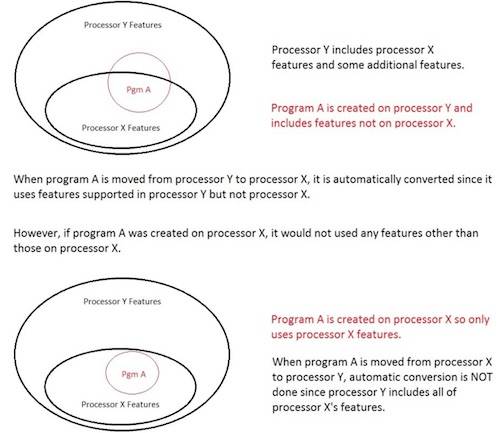 Conversion can also happen if it is manually forced using one of the following mechanisms:

Here are some conditions where manual conversion would be useful:

Starting in IBM i release 7.1, new tools are available to easily convert existing programs. They are the QBNCVTPGM and QBNCVTPLST tools. These tools can be used to convert objects even if the program does not have the required creation data needed for the change commands (see the Restrictions section). QBNCVTPGM is included in the operating system through a program temporary fix (PTF).

QBNCVTPLST is available for download. See the How to get the tools section.

Note that use of these new tools is not required for the correct running of an application; however, using them can provide the advantages described previously.

The QBNCVTPGM tool is installed with a PTF. It is used to perform conversion of a single program, service program, or module (type *PGM, *SRVPGM, or *MODULE).

The syntax for invoking the tool is:

For example, to convert program BLDCPS in library QGPL, use the following code:

In order for the QBNCVTPGM tool to convert the program, service program, or module, the following conditions must be true:

Any escape messages are signaled back to the caller, so they have an awareness of how the conversion progressed. The following table lists the escape messages and description. Viewing all previous messages in the job log will indicate the actual error that occurred.

Generally, the caller of this tool should perform the following tasks:

When an object is converted, the processor features of the current system are used when building the program. Using these new features may improve the overall performance of the application. In addition, any of the latest integrity enhancements will be included in the converted program.

Converting a program can have the following effects:

The QBNCVTPGM program is not thread safe; therefore, if multiple instances of this program are to be run simultaneously, each instance should be run in a different job, not in different threads in the same job. Running in separate jobs will ensure that each instance of the program will run independently.

To provide an example of how the QBNCVTPGM tool can be used, the QBNCVTPLST CL program was developed. The source code for the program is provided below. It can be used as is or modified as needed. Also, see the How to get the tools section to download it.

Input to this program is the name of a file and library that contains the member PGMLIST, which has a list of objects to be converted. The member PGMLIST should be generated using the Display Object Description (DSPOBJD) command with the OUTPUT(*OUTFILE) parameter. Because the QBNCVTPGM tool converts only program, service program, and module objects, only *PGM, *SRVPGM, and *MODULE types should be included in the list. As an example, assume all the programs and modules in libraries ABC and DEF are to be converted. The following commands would create member PGMLIST in file MYFILE in library MYLIB and call this CL program.

The CL program defines the input file as having the same format as the output from the DSPOBJD command (lines 24-25). It then loops through each record of the file (each record is one object to convert) and calls the QBNCVTPGM tool to perform the conversion of the object (lines 35-39).

If message MCH3405 or message MCH5802 is generated, the object is considered to be in use. The object did not get converted. It is added to a RETRYLIST member in the input source file. That way it can be retried later when the object is no longer in use (lines 43-44 and 56-60).

If message CPF9899 is generated, the most likely reason for this failure is that the object did not have enough creation data available. If that is the case, it makes no sense to retry this object again because it will likely fail the conversion each time an attempt is made. Instead, it is added to an ERRORLIST member in the input source file (lines 48 and 62-66). Objects that are added to member ERRORLIST did not get converted.

On line 52, message CPFA0AE is monitored. This message is generated if an object cannot be found. Because the objects should be found in the input list (as the list was generated by the DSPOBJD command), these messages are just placed in the job log and processing continues.

Other escape messages generated by the QBNCVTPGM tool will not be monitored and will be presented as an inquiry message by the CL program. If another behavior is required, a new CL program based on this source can be created.

If the QBNCVTPLST CL program is allowed to complete (and it is not cancelled), all objects in the PGMLIST member are processed. After that is done, the control branches to the label LOOPEND on line 68. When converting objects in the PGMLIST member, the program may have created a retry list in member RETRYLIST and a list of errors in member ERRORLIST. Because the retry list includes those objects that can still be converted, lines 70-80 copies the member RETRYLIST into member PGMLIST. Doing so allows the same call to QBNCVTPLST to be issued again after the objects are no longer in use.

The member ERRORLIST contains a list of objects that did not convert, likely due to missing creation data. If ERRORLIST is not empty, lines 82-93 print a command that can be used to easily view what is in the ERRORLIST member. Note that this list is cumulative. It is meant to be a list of all objects that did not convert from multiple runs of the CL program. If the ERRORLIST member needs to be cleared of previous entries, the following command can be issued:

The following sequence of commands shows how QBNCVTPLST can be used. An attempt will be made to convert all programs starting with the letter B in library MHESSLER. First, create the list of programs in member PGMLIST in file MYFILE in library MYLIB:

Note: As this program runs, member PGMLIST will be changed. If the original list is to be kept around, make a copy of it before running the tool.

Now, invoke the QBNCVTPLST tool to start the conversion of objects listed in member PGMLIST:

When the tool completes, it generates the following messages:

As BLAZE contains no creation data, it is not converted and is placed into the ERRORLIST member. Because BLDCPS is currently in use, it is left in the member PGMLIST so that the command can be tried again when it is not in use. Later, after the BLDCPS program is no longer in use, the command can be run again:

BLAZE is still in the member ERRORLIST from the first time the tool was run. It was not tried again because failing without creation data on the first invocation means it will fail again on the second invocation. Therefore, it is placed into member ERRORLIST rather than kept in PGMLIST. Because the second run did not generate the in use message for BLDCPS, there is nothing left to retry. Of all the programs that were initially listed to be converted (MHESSLER/B*), all were converted except those listed in the ERRORLIST member (MHESSLER/BLAZE).

How to get the tools

The QBNCVTPGM conversion tool can be obtained in releases IBM i 7.1 through 7.3 using PTFs. The PTF needed for each release is listed below. When the PTF is applied, the tool will be placed into the QSYS library.

Download a copy of the QBNCVTPLST program source, then place the code in a source physical file, for example, MYLIB/QCLSRC.QBNCVTPLST. If the source is to be used as is, a program object can be created in the MYLIB library that can be called as described in the Sample usage of QBNCVTPLST section by issuing the following command:

QBNCVTPGM and QBNCVTPLST provide a simple way to force program conversion without using save/restore or change commands. One benefit of converting programs includes taking advantage of as many processor features as possible on the system on which the conversion takes place. Doing so may improve the overall performance of an application. Also, converting a program causes it to use the latest integrity enhancements available. This can make an application more secure. Program QBNCVTPGM is included with the operating system through a PTF. The source for the QBNCVTPLST CL program can be downloaded and customized as needed.

Connect with the the IBM i community

Connect, learn, share, and engage with other IBM i users as you follow what’s trending and join the discussion. Join now