It is also possible to run Linux in the compute fabric as a multiuser operating system. This standard programming environment broadens the set of applications which can run on the leadership hardware and makes it easy to put the supercompute capability in the hands of scientists, engineers, and other business personnel who need it.

This article shows a Linux application running on an IBM® POWER9™ (model 8335-GTW) supercomputer cluster, and presents the software you need if you have a machine like this and want to get started with Linux.

Having your own supercomputer is like having your own Amazon Elastic Compute Cloud. The benchmarks and test cases that you use to measure previous generations of computers (mainframes, PCs, games consoles, cellphones) don’t really apply in this new world.

Fortunately, some of the software developed for those other types of computers can be pressed in to service to make some basic measurements, to showcase these new computers, and to illustrate who in a modern competitive business needs to have access to these facilities.

Writing this article in five years’ time would be simple; we might most likely have oil reservoir models, airline seat pricing models, gas turbine flow visualizations, and similar techniques to show off; the market would be mature. However, today is today, we’re in at the ground floor of new and growing business, so we’re adapting IBM General Parallel File System (IBM GPFS™) for the purpose.

A typical IBM Spectrum Scale installation consists of maybe 10 servers, each with up to a few hundred disk spindles. These servers provide POSIX file system services for hundreds to thousands of network-connected client systems.

IBM Spectrum Scale provides data replication, volume management, backup/restore, continuous operation in case of disk and server failures, improved serviceability, and scalability. These are features needed by enterprises and are what distinguish this IBM technology from open technology such as Network File System (NFS).

In our scenario with the POWER9 cluster, we allocate a solid-state disk of 1.5 TB on each POWER9 node as if it was a disk spindle. The whole IBM Spectrum Scale system consists of 16 server nodes, each with one disk of size 1.5 TB, providing a coherent POSIX file system image to client applications running on the 16 server nodes. This is an unusual geometry for an IBM Spectrum Scale cluster; but it is viable.

I had access to 16 server nodes; cluster sizes vary from two nodes all the way up to several thousand nodes depending on the intended application.

The scripts I used to configure and run this benchmark are available for download in the Resources section.

Interleaved or Random (IOR) is a file system benchmark from the University of California. Figure 1 shows a screen capture of it running on the 16 nodes of the POWER9. 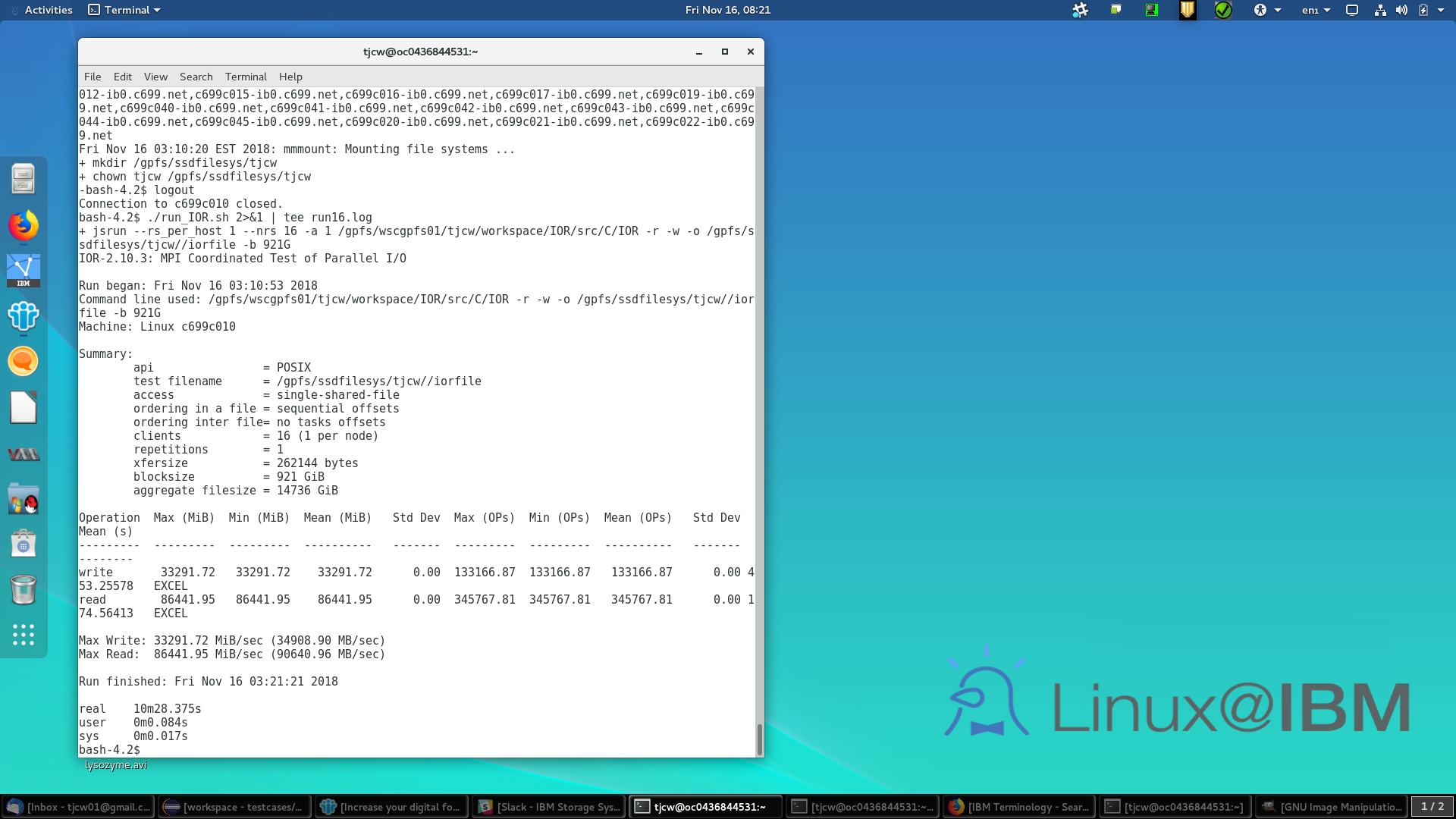 Refer to Listing 1 for the text from Figure 1.

Log on to the launch node named c699launch01, and issue the jsrun command to ask for one processor core on each processing node to be joined up over TCP/IP as a Message Passing Interface (MPI) job.

MPI runs IOR, a distributed file system benchmark which you could run over NFS among a cluster of workstations. In this case, IOR is running over the IBM Spectrum Scale File System with its data in solid-state disk, and it achieves an average write data rate of 33.3 GBps and an average read data rate of 86.4 GBps over Mellanox InfiniBand among the 16 nodes. These data rates are limited by the transfer speeds to and from the solid-state disks.

It would be possible to ask jsrun to run the MPI job over all 704 processor cores on the 16 nodes by specifying --rs_per_host 44 –nrs 704, but one core per node is sufficient in this benchmark to use the whole capability of the solid-state disks.

IOR is a synthetic benchmark and not a real application. But if you want to compete in the world of high performance computing, you need to be able to run it well. And it shows how easy and quick it is with this IBM POWER9 cluster and Linux, to leap from a standard desktop environment to a standard cloud computing environment.

This article has not attempted to explore another significant feature of the IBM POWER9 model 8335-GTW; the capability to receive and transmit 10 Gbps per node of data traffic over the standard TCP/IP protocol. This feature may have the most long-term significance, as it enables IBM’s customers to construct web-scale architectures for serving data to and analyzing the needs of their customers. For example, these 16 IBM POWER9 nodes may be able to drive 8000 domestic broadband connections at the rate required for video streaming at DVD quality, continuously. We may be at the beginning of a new opportunity for those who might provide and consume this type of connected data infrastructure.

How to Encrypt Your Enterprise at Scale