So you want to fix Kubernetes?

This setup guide is primarily for developers, technical writers, and testers who are, or will be, working on and contributing to the Kubernetes open source project. For example, it is intended for people who want to make documentation edits, code fixes, and draft new features for Kubernetes; who develop and use various types of applications that use the Kubernetes API, such as profiling, monitoring, and integration tools; and who develop services that specifically take advantage of the Kubernetes feature set.

Some basic questions up front

Before we get started, you might have a few questions, if you are new to Kubernetes.

Kubernetes is a set of applications written in go. These applications work together to form an interactive platform for managing containers.

Where is the Kubernetes source code?

Kubernetes is available on GitHub.

Kubernetes is open source software and was donated by Google to the Cloud Native Computing Foundation (CNCF).

Where does Kubernetes run?

Kubernetes runs on many operating systems/distributions. However, this guide shows you the setup steps for developing and testing Kubernetes on Ubuntu.

To follow along with this setup guide, you need the following prerequisites:

Estimated time for the steps in this setup guide is totally up to you, where you are already at in theses sequence of steps. Some developers will begin and use the skip-ahead links, perhaps just use this article as a reference. Others might take half a day, a full day, or even a couple days or a week, for example, if you are having a lot of issues or are new to OSS development, testing, or Linux.

To resolve such time variances, I provide the skip-ahead spots. When certain things take a long time, even for experts, I tell you. I also provide shortcuts, which you can take to build and test only very small portions, thus making it fast. How long operations take can depend on your hardware. For example, some of the testing operations might take 10 minutes for a fast cluster or 20 hours on a slow laptop.

If you already have all that set up the way you like it, feel free to skip ahead to GitHub and the Kubernetes project.

Setting up your host operating system

First thing you will need to do is install Ubuntu somewhere. Ubuntu 16.04 or 18.04 LTS Server or Desktop will suffice. You could also use more recent non-LTS releases, it is up to you. I am running 16.04 LTS Desktop in a virtual machine (VM) on my iMac through the latest Virtual Box, 18.04 LTS Desktop on my Mac laptop through Virtual Box, and 18.04 LTS Server on bare metal servers I assembled with mostly used parts.

You can certainly use virtual machines for Kubernetes development, and I do, so don’t be discouraged if you don’t have the resources to build your own server.

To set up Ubuntu on Virtual Box, complete the following steps:

If you are using Ubuntu Desktop, create a terminal: 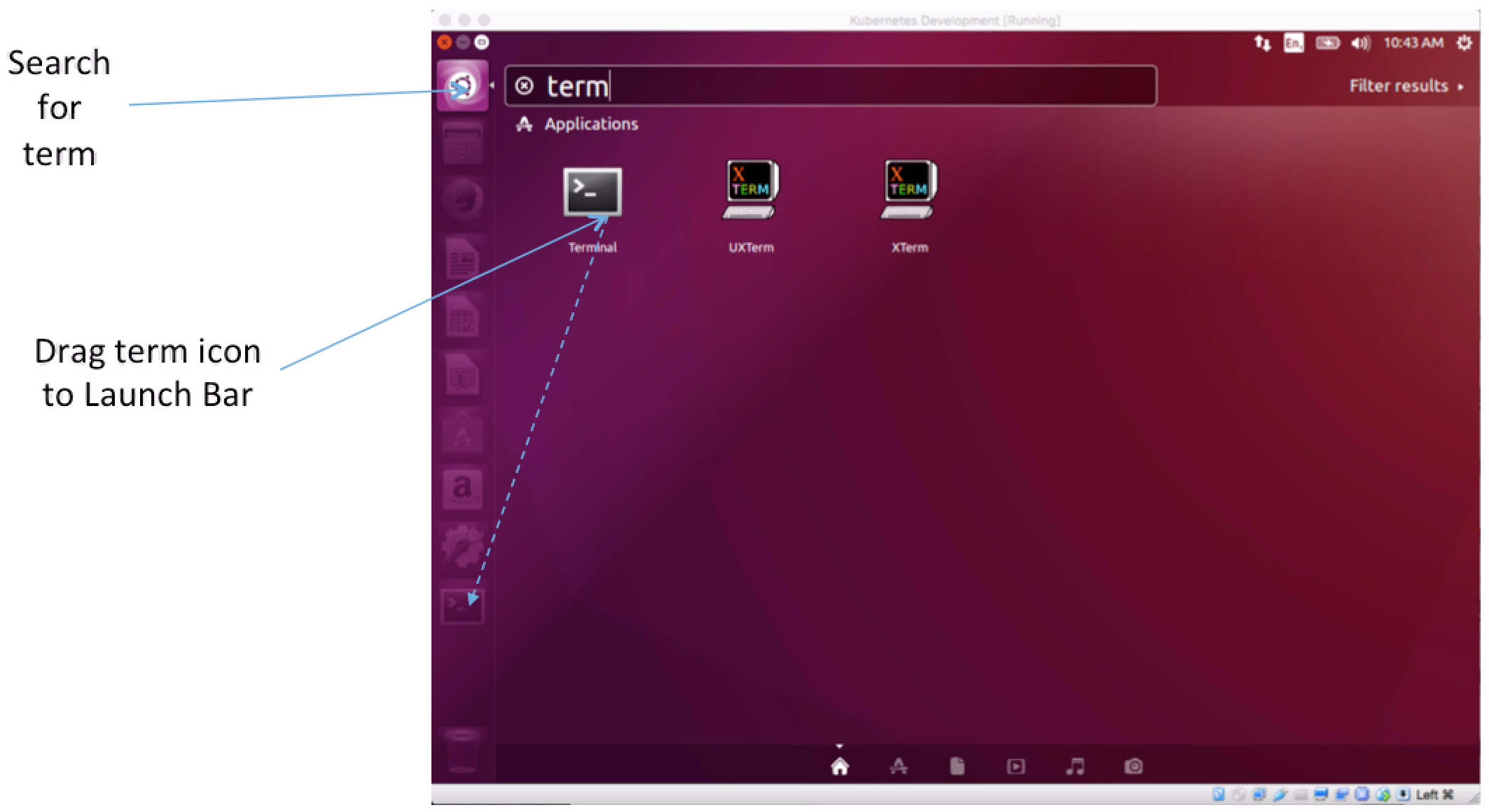 Then run the software updater:

The following screen capture shows running the apt-get update from a terminal:

If you installed Ubuntu desktop and you want to run ssh, complete the following steps to start using ssh:

Use your PC or Mac client to ssh over to your Ubuntu server or desktop. If you installed Ubuntu desktop and you want to run ssh, run the following commands:

Running the end-to-end Kubernetes tests used to require configuring password-less ssh (using keys not passwords). If you don’t want to set up password-less ssh, skip ahead to Installing Go.

Then use the default location and enter a password, or just press ENTER:

On your Mac, run the following command from the ~/.ssh directory to generate a key:

Next, configure your Ubuntu guest for password-less ssh:

Make the following edits to UN-comment/configure:

Make sure it works, and then exit.

Because you will log in as root as password-less, you can take a shortcut and copy your user public and private keys, and authorized_keys over to /root/.ssh, for example:

You should now be able to ssh, root or user, to your guest ubuntu, without a password, from your user account on your Mac terminal:

At the time of installation, make sure to install the latest version of Go that is supported by Kubernetes (or as close as possible).

Pick the version you want from https://golang.org/dl/ and then curl (download) it to your local host:

Configure environment variables for applicable users, for example, the currently logged in user (~):

Now you add the export path statement to those files by adding this line:

To run as sudo with your user profile edits, run the following command:

Although riskier, you can log in as root and change your sudo secure_path through visudo to add paths for go:

To install Docker, you first update your packages:

Then remove any prior versions:

Install the latest stable versions of Docker and containerd:

To pick a particular version of Docker, run the following command:

Add yourself to the Docker group that runs as sudo, so you can run Docker without typing sudo:

Log back into your host with ssh after the host has finished rebooting, and test docker again, without sudo this time:

Run the following command to install jq (a JSON processor):

Run the following commands to install python-pip and pyyaml:

GitHub and the Kubernetes project

First, let’s look at forking and then cloning your forks. Then there are several considerations for profiles and client configuration. Finally, you learn about the Git workflow for the Kubernetes project.

Create your development forks on GitHub for:

Normally, when cloning a github.com source repository, you use the $GOPATH/src/github.com path or the ~/go/src/github.com/projectname path (representing the path to source in GitHub). The reason is for convenience when using go get type commands to pull down GitHub hosted packages.

However, for legacy reasons, Kubernetes packages are named k8s.io/kubernetes not github.com/kubernetes/kubernetes, as you might expect. Thus, to make all of the development tooling work correctly, to be able to find your package code on disk, you need to put the clone in a k8s.io directory instead.

Create the k8s.io/kubernetes source trees from your name/kubernetes forks using the following steps:

Result: The source files are copied (cloned) from your forks into the go/src/k8s.io/kubernetes and k8s.io/website directories. Git creates a master branch on your local hard disk for your git hub forks.

Check status of your branch:

Set the user.* entries to global, local, or both:

Make it easier to push:

Run the following command so you don’t have to remember your GitHub credentials each time:

Tell git to track changes to the cloned branch on your hard disk against kubernetes/kubernetes:

The Git workflow for the Kubernetes open source project

The following diagram shows a typical Git workflow for finding and fixing an issue with an open source product on GitHub. While this flow was drafted for Docker, it also works for Kubernetes. 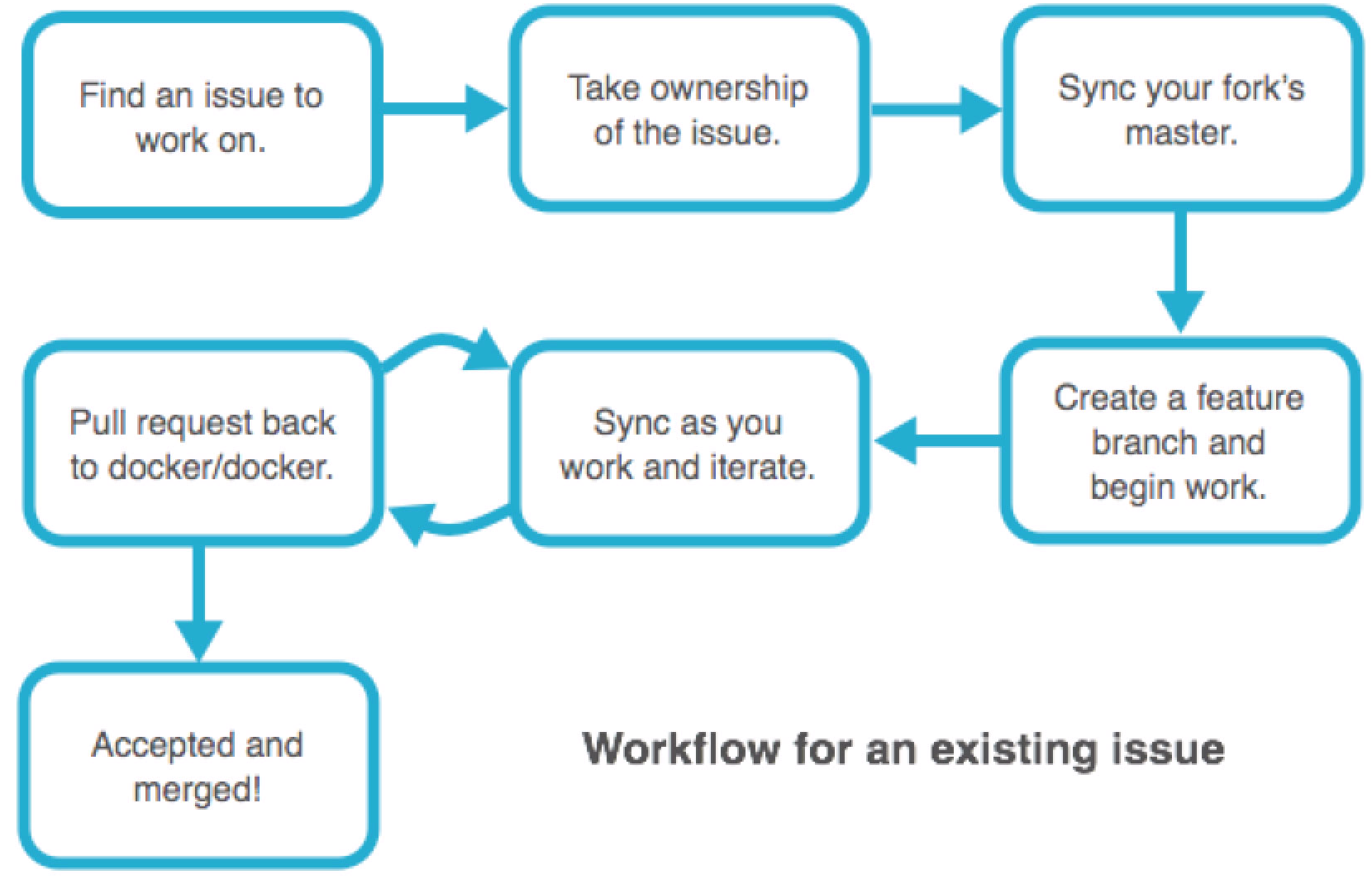 Find something to work on here in the Kubernetes issues: https://github.com/kubernetes/kubernetes/issues

If you have questions, don’t be shy.

If you want to work on it, say so. For example, add a sentence that says you are calling #dibs, to indicate you are working on this issue.

If you are not sure whether you can fix it yourself, at least announce that you are investigating with #investigating. You are not assigned, but it lets others know that you might call dibs later on.

Add the displayed path to etcd to your user profiles. For example, add /home/mike/go/src/k8s.io/kubernetes/third_party/etcd to your paths with the following command:

And if you want, add it to your secure\_path for sudo:

Log back into your host with ssh after the host has finished rebooting, and test etcd:

Use the help target to show make options:

A few disclaimers and warnings: The first time you build, verify, and test, Kubernetes takes a long while, because it is building and downloading a significant number of large container images. Some downloads might fail, causing unexpected build and test failures the first and possibly even second time you try to run them. Also since you will be building off “master” errors might be be expected for some or many portions of the testing, and some errors only occur after long timeouts, so patience is required. Even if everything is already downloaded and there are no errors, expect the building, verifying, and testing steps to take a significant amount of time.

If you want to build everything for running Kubernetes locally, use the all target:

If you want to build just one of the package/executables, use make WHAT=cmd/package\_name. For example, to build the kublet server, run the following command:

Depending on what you changed, the client/server packages might not always build. If you want to force both to be in sync (clean/remove build binaries), use clean:

To generate a release, run the following command:

To generate a release without running tests, run the following command:

Before committing changes to your local development branch, it is recommended that you run verify, unit, and integration tests. Depending on the type of change, you might also want to run end-to-end test buckets.

Build verification tests (for example, presubmit verification) to be done before pushing a PR to kubernetes/kubernetes:

Run the following command for just the pkg/api/pod tests:

Run the pod and kubelet tests in verbose mode:

The following sections show how you run Kubernetes end-to-end, or e2e, tests.

2. Bring up a local cluster

Running the Kubernetes e2e tests requires using a cluster. The e2e tests can be run on any Kubernetes compatible cluster. This guide shows you how to create a single node cluster running in your Linux environment. If you followed the previous instructions, this cluster runs in your Ubuntu guest account in your VM or Ubuntu host on bare metal. You use two terminals.

A note about end-to-end test: With the default e2e test options, when the version of the client and server are out of sync, the e2e tests won’t run. You can now run the e2e with the versions out of skew by setting the check_version_skew=false.

In terminal 1, build Kubernetes and start up your local cluster:

Check the status of your single node local cluster:

Note: The minStartupPods is set to 1 to reflect that you have only one node in your local cluster.

Now run all the e2e tests (this takes a long time to complete):

When finished using your Kubernetes cluster, you can quickly bring it down with ctrl-C in terminal 1.

In terminal 1, start up your local single-node cluster:

Run all the e2e-node tests (This step takes a long time to complete):

After you edit source files that are used in the generation of other source files in the kubernetes/kubernetes tree, you must update the generated files before doing a git commit. Run the following command:

If you want to contribute to the Kubernetes documentation, follow these instructions.

Other things to do

You’re not ready to stop yet. Here are some more tasks you should do:

I hope this guide has helped you get started with your journey into Kubernetes development. Review and follow the Kubernetes Community Guidelines to become a successful contributor, member, reviewer, approver (AKA “committer”, AKA “maintainer” ), and/or a sub-project owner.

You can reach out to me at brownwm@us.ibm.com and https://twitter.com/mikebrow.

Modern Enterprise Architectures with Enterprise IT Systems - Legacy or Goldmine?