Strategies for modernizing your applications

Modernizing and refactoring your own code is difficult. Doing it with legacy code from other developers is even more difficult. Application modernization is a complex process, one that you need to plan carefully.

Like any complex process, you can break down application modernization into multiple steps, where every step can add value along the way. We can apply the agile practice of incremental updates to take incremental steps, help manage the complexity, and mitigate risk.

In some cases, you might discover that it is not worth the cost to modernize your legacy applications, and instead decide to retire them or just not touch them. In other cases, you will take a minimalist approach and instead modernize those on-premises applications by migrating them to either a public or private cloud using the lift and shift or rehosting strategy.

But, really, to truly modernize your applications, you’ll be applying one or more of the following strategies:

The following figure is an example of a monolithic application architecture and our starting point on which to apply the various strategies. 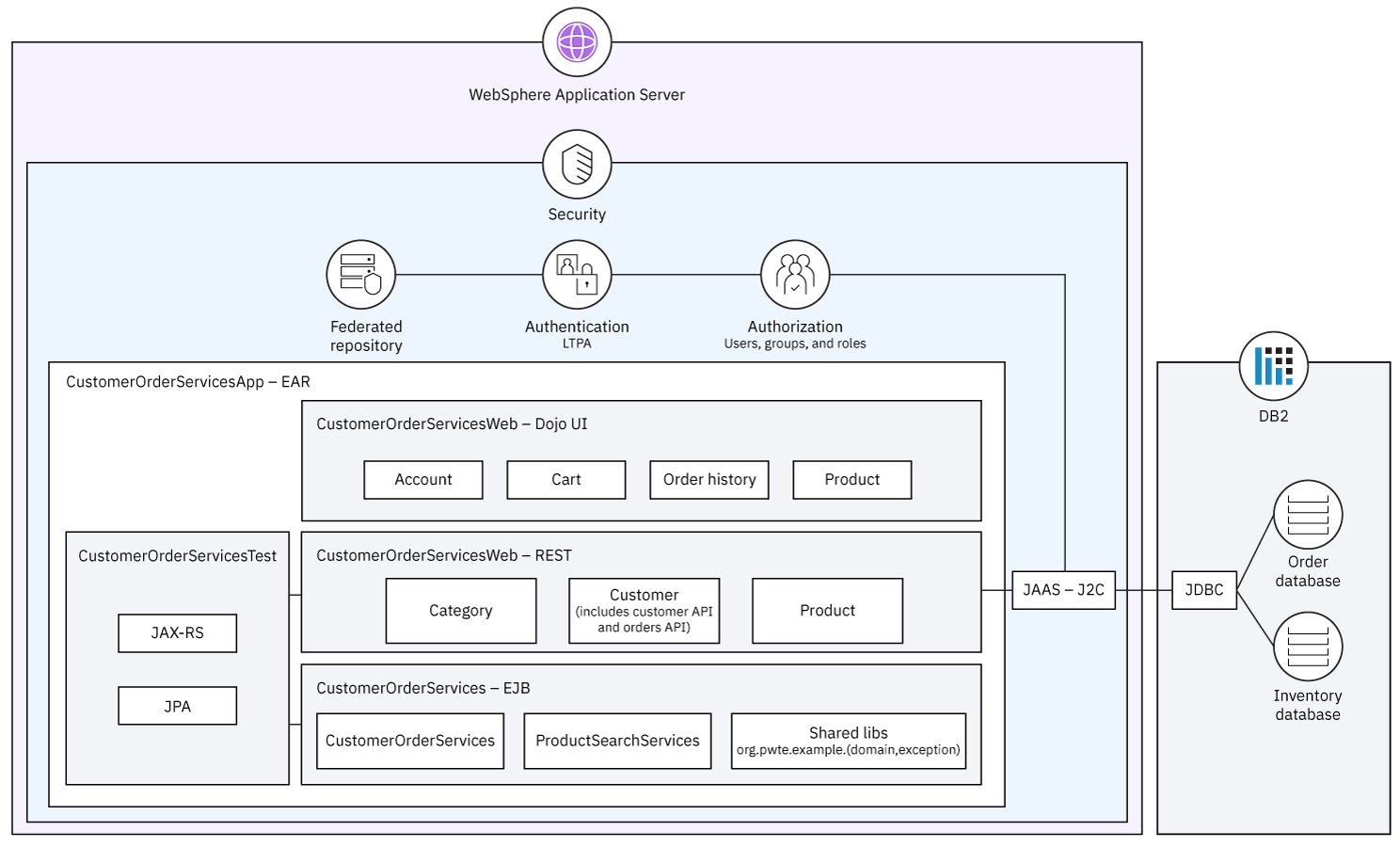 The previous figure is a good example of a monolithic application architecture:

Core to understanding why this is a candidate for modernization is the way in which this application is both built and deployed. This enterprise Java application, while multitiered, is made up of closely coupled components and runs on the WebSphere Application Server in its entirety, which makes it difficult to distribute or move the functionality easily. Scalability of the monolithic application is resource intensive because new instances of the entire application, including the application server, are needed to support increased workloads. Furthermore, resources must be increased to meet the needs of the most resource-heavy component, even if the vast majority of the other components have no need for the level of resource allocation such as memory, CPU priority, GPU access, and networking.

Modernizing an application like this, by using the strategies described in this article, will enable the following:

One of the first steps in your application modernization journey is to containerize your legacy applications. By using containers, your applications can take advantage of some of the operational benefits of cloud-native technologies, including portability, security, and scalability, without the need to rewrite much if any of the application or changing the runtime environment. Once in a container environment, running your application on major cloud platforms and modern on-premise servers is possible. Containerization delivers some of the deployment and resource flexibility described as lacking in the traditional monolithic application above.

To understand the benefits of moving to containers, start with part 1 of this article series. Then, read “Containerization of legacy applications“

Red Hat OpenShift is a robust, enterprise-level Kubernetes implementation that enables the rapid and scalable build, test, and deployment of your applications as you move their architecture and design from monolithic toward a cloud-native environment. Containerization is often the first step on that path, but likely not the final one. By choosing a container orchestrator that’s built on open source software, as Red Hat OpenShift is built on Kubernetes, you can run your containers on any cloud, including IBM Cloud.

One of the simplest steps you can take when modernizing your legacy Java EE applications is to update your application runtime by using a modern, modular enterprise Java runtime like Open Liberty project or WebSphere Liberty that is ready for container-based deployments or cloud deployments.

Read more in Step 1 of “Modernize your valuable Java applications“.

Even without refactoring your monolithic app to use microservices, moving to a lightweight app server reduces inefficiency and adds a lot of value. You can reduce both costs (license and resource) and your technical debt by modernizing your application runtimes and take a step closer to an agile delivery model for your applications. From our example monolithic application architecture, this reduces the footprint of the application server to only the services needed by the application and not the entire enterprise Java stack.

Modern runtimes like Open Liberty are upward compatible and deliver optimal performance for your existing applications, building on the evolving Jakarta EE and MicroProfile specifications toward cloud-native architectures, while continuing to support earlier Java constructs and features.

Open Liberty and WebSphere Liberty are built for cloud-native and cloud application delivery. Easily containerize and deploy your enterprise Java apps to any cloud Kubernetes-based container platform, such as Red Hat OpenShift, to target any public cloud (such as IBM Cloud or AWS), private cloud, or on-premises infrastructure. Applications can then be built, deployed, and managed more consistently using OpenShift.

Read this article to choose the right Java runtime for the job, based on your architectural style.

As for Java workloads that need to run in containers, using Open J9, an open source JVM, is best. Recently, the AdoptOpenJDK project transitioned to the Adoptium Working Group in the Eclipse Foundation to help drive the delivery of high-quality Java JVM runtimes and technology. Eclipse OpenJ9, while not directly distributed through the Adoptium project, will be available through IBM’s Semeru Runtimes project. OpenJ9 uses only half the memory compared to other JVMs and it starts twice as fast.

For a Java development platform, you can’t go wrong with IBM’s lightweight and versatile cloud-native framework, the Open Liberty project, or Quarkus, a “Kubernetes Native Java stack” that helps you move towards reactive programming, which provides a compile-native capability.

Strategy #3: Refactoring the monolith to microservices

Ultimately, refactoring your business-critical monolithic applications into microservices, supported by a cloud-native architecture is highly desirable. As noted in the description of the monolithic application architecture, this breaks the need to both update the entire application when replacing a component or resolving issues found in a service, and provides flexibility in scaling, securing, and distributing the parts of the application in a more responsive manner. Of equal importance, new features can be developed quickly in response to evolving business needs.

You can learn more about Mono2Micro in the “Introduction to Mono2Micro” learning path.

You can use these architectural patterns to help refactor your application into microservices. These patterns further address the issues outlined above in our review of the monolithic application architecture:

You can read more about the Strangler pattern, which Martin Fowler defined back in 2004, and which Kyle Brown wrote about in 2017 in his article, “Apply the Strangler Application pattern to microservices applications.”

Microservices-based architectures come with several benefits, such as the ability to scale services independently from each other. The Strangler pattern is a good way to approach building microservices around existing monoliths. Essentially you externalize key functionality from monoliths in separate services without having to re-factor or re-implement everything. The Strangler pattern lets you modernize your applications in stages, externalizing just the key functionality of your monoliths.

The Strangler pattern helps you evolve your architecture incrementally from the distributed monolith strategy outlined above. Microservices run in distributed environments. The more microservices you have, the more network traffic typically occurs. This adds complexity, rather than reducing it, which is one of the reasons you use microservices in the first place. When re-factoring applications, the goal should not be to have microservices, but to de-couple components as much as possible, which may or may not map to having a large number of microservices.

Learn more in this article about how you can build distributed, highly scalable systems by using event-driven and microservices architectures.

There are many different ways that services can communicate: different protocols, synchronous vs asynchronous, different serialization technologies, and more. One of the most common and easiest ways to enable communication between services is through synchronous REST API invocations. However, when it comes to microservices-based architectures, this technique is often considered an anti-pattern since the dependencies from the monolithic architectures still exist and they are now even harder to manage in distributed systems.

When breaking down monoliths into microservices, it’s important to minimize the dependencies between them. Instead of synchronous REST API invocations, the anti-pattern, you should aim to use asynchronous, event-driven architectures. This doesn’t fully eliminate dependencies, but instead it minimizes them to achieve loosely coupled components.

You can develop event-driven, microservices-based applications by using the messaging architectural pattern that uses asynchronous messaging technologies like Apache Kafka.

When breaking down monoliths into microservices, the goal is to minimize the dependencies between the services. Event-driven architectures help you develop loosely coupled microservices.

Applying a domain-driven design approach can help you define the microservices needed and integrate them into an event-driven system.

One of the baby steps you take in modernizing your application is to separate your front ends from the back end. However, to implement a true end-to-end microservices architecture, you should build micro front ends as well.

The decision to modernize existing business-critical applications is the right one. However, the right strategy can make the difference between a successful migration or an unmanageable backlog of issues as you move toward a cloud-native architecture.

As discussed in this review of application modernization strategies, you might discover that the return on investment does not warrant the effort to modernize your legacy applications. Instead, you might decide to retire them or take incremental, value-based steps along the way to fully containerized, microservices-based cloud-native applications.

Reasons to modernize your applications