cURL, which stands for client URL, is a command line tool that developers use to transfer data to and from a server. At the most fundamental, cURL lets you talk to a server by specifying the location (in the form of a URL) and the data you want to send. cURL supports several different protocols, including HTTP and HTTPS, and runs on almost every platform. This makes cURL ideal for testing communication from almost any device (as long as it has a command line and network connectivity) from a local server to most edge devices.

The most basic command in curl is curl http://example.com. The curl command is followed by the URL, from which we would like to retrieve some kind of data. In this case, it would return the html source for example.com.

Underlying the curl command is the libcurl development library, which has bindings for almost any codebase.

cURL is also the name of the software project, which encompasses both the curl command-line tool and the libcurl development library.

To try out the commands in this article, you need a command shell and internet access. We are going to be using the NASA APOD (Astronomy Picture Of the Day) API to create some examples. This API is open source but you will need to sign up for a developer key, which takes just a minute to get signed up.

So, why should you use cURL? Consider these benefits of this software project:

We can use curl to send API requests. Each request is generally made up of four main parts:

There are over two hundred curl options. You can see some of them by typing curl -h in a terminal. The most commonly used command options include these:

Combining curl with other CLI commands

Combining curl with other cli commands can be really handy in situations where you want to use the output of a command as the input to a curl command or vice versa.

As an example, you could see if a webpage contains a certain piece of text using curl and grep.

Here is an example of using curl and Python to extract the image link from a request to the NASA API and display it in the Preview app (MacOS only):

In this example we use curl to make a GET request on the Nasa API endpoint. This returns json data, which we use in a small Python script to extract the url of the image. We then use the curl command to get the image and open it using Preview on the mac. 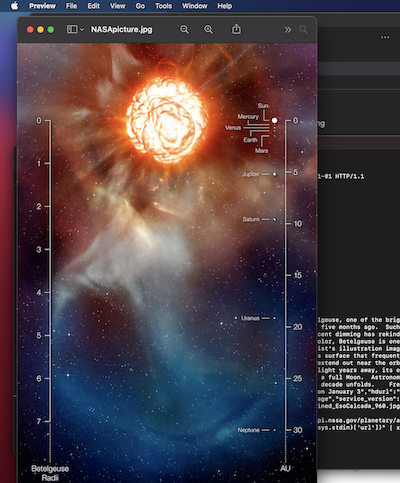 You don’t have to use the command line curl to make API requests. You can use a number of different tools to interact with an API, such as HTTPie, Postman, and Rest Client in VS Code.

HTTPie is a command-line HTTP client that is touted as more friendly to users. It also includes a more expressive, color-coded UI. They have an online version, which is really neat.

Postman is a UI-based client for all things related to API development, and it’s arguably one of the most popular. Postman is very powerful.

You can generate and execute curl commands from within Postman. To generate curl commands, you can enter the request URL and parameters, and then click on the code option on the right-hand side:

A box is displayed with the option to select from a number of languages, including curl. Select curl to see the generated curl command.

Postman gives you a history of all the requests that you’ve built and even data-stamps them, which can be nice for collecting data points or references as you work with an API. Think of it as the client taking notes for you. 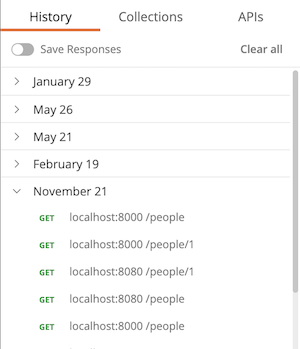 Rest Client in VS Code

Rest Client for VS Code is probably one of my favorite tools for executing curl commands. It’s lightweight and has good syntax highlighting. It’s a really useful add-on to do some quick curl requests from within VS Code.

You can simply type in your curl command and a ‘send request’ option will appear above.

After you click send request, another tab opens with the response.

Summary and Next Steps

In this article, we introduced you to the basic curl command and its most useful options. We also mentioned only a handful of the tools that are available to help you get started with cURL. Now you can begin using cURL to test your endpoints and troubleshoot your applications.

To find out more about APIs and API Management, check out the following articles and videos available on IBM Developer:

This article was originally authored by Amara Graham and published in April of 2019.

What is a REST API?