A recap of EclipseCon Europe 2018.

I had the pleasure of joining the IBM team at this year’s EclipseCon Europe, which was a joint event with the OSGi Community Event in Ludwigsburg, southern Germany. It soon became very clear to me that community was indeed the operative word! But more on that later. Each year, there are typically 600 attendees to this conference, all of whom are looking to explore the latest developer trends and apps. Let’s take a look at EclipseCon 2018.

Java’s importance and relevance today is not certainly disputed, with Eclipse being the most widely used IDE for Java. This year the focus was on: web & cloud development, runtime & frameworks, and cloud-native Java, among many others. MicroProfile, for instance, has notably grown in importance. Sessions ranged from 35 minutes long, to deep dive tutorials lasting 3 hours, to Ignite Talks lasting just 5 minutes!

Even from the opening speech, we received a very warm welcome from Mike Milinkovich, Executive Director of the Eclipse Foundation. It was fascinating to see all of the attendees who had been to multiple EclipseCon conferences! My favorite quote from Mike Milinkovich was: “Be awesome.” Wise words from the leader of the open source organization. For me, his words resounded throughout the conference. It was one of the most relaxed atmospheres I’ve ever experienced! Not only did Mike encourage us to make the most of this conference, he also gave us an update in the growth of Java EE, which was fairly impressive.

I also pretty quickly got a good feel for the community’s priorities. It was wonderful to see the Call for Code challenge also featured in the conference’s inaugural speech! Be sure to check out the 2018 winners, Team Owl, and their solution. Discover how you can also get involved next year.

Following the conference welcome and introduction, Mandy Whaley from Cisco DevNet spoke on Marie Curie, her childhood hero. In fact, the title of the talk was “Marie Curie, Open Source, Kickstarter, and Women in Tech.” I considered myself well-read on all things Women in Tech; I didn’t expect there to be much new information for me. Yet Mandy showed that there is so much to discover about Marie’s career, private life, and her journey as a scientist – there is a very surprising number of parallels that can be drawn from her experiences to situations we face today. Who knew she faced decisions about Open Source back in the twentieth Century?! We explored the challenges she faced as a woman and later as a single parent, which created a very inspiring keynote. Mandy also stressed the importance of role models in STEM for younger women – which proves to younger generations that She Can STEM.

This aptly named session drew on US adverts throughout the ages. I also attended Kevin Sutter’s “Lead Architect for WebSphere’s MicroProfile and Java/Jakarta EE Solutions” talk on Jakarta EE and learned a great deal. The community behind Jakarta EE is active and vocal. There’s a great story behind both the name and logo. Also, Kevin mentioned a recurrent theme throughout the conference: code first. These two words demonstrate that the focus remains on the code!

There was a whole variety of sessions (and IBM talks!) at EclipseCon. Did you visit one? BJ Hargrave spoke on OSGi and Java 9+; Jayashree Kumar explained why Kotlin is her favorite example of Functional Programming; Charlie Gracie and Michael Thompson explored adopting Open J9 for Spring Boot performance; Lakshmi Shanmugam shared Eclipse tips and tricks; Cloud-Native Java with Jamie Coleman; Cadence strategies from Theresa Mammarella; and many more!

At the IBM booth, we had an online game. Liberty Bikes is a real-time web-based multiplayer game running on OpenLiberty, hosted on IBM Cloud. Four players simply join the game and navigate their bike on the board, each one leaving a trail. The goal is to be the last player on the board. Watch out for any obstacles, other players, and, of course, the bike trails! It’s a fast-paced game, which typically lasts around a minute. Bonus: Liberty Bikes is completely open source.

Liberty Bikes is built on the latest microservices. The game utilizes Java EE 8, MicroProfile 1.3, Angular 6, and Gradle build, running on the IBM Cloud and using the Continuous Delivery Pipeline. It can be run with just one command.

The game has a front-end Angular user interface, which talks to three different back-end microservices, all running on Liberty servers. Let’s take a quick look at each one:

Liberty Bikes demonstrates the benefits of a microservices architecture, such as: allowing independent scaling and development of the individual services. It also makes continuous delivery and deployment possible. This architecture provides a great deal of freedom for languages and framework across the system.

We had one of the game’s creators with us, Andy Guibert, who even held a session to explore the game in more detail: “MicroProfile: It’s All Fun and Games,” wherein he detailed not only the benefits of this architecture, but also possible problems that could occur as a result.

We had a few tablets with the game installed, ready to go. It was also possible to join with a mobile. Basically, it was really easy for conference attendees to join the game, play, and compete to win.

Check it out yourself! Fork the code.

Looking forward to next year

Not only did EclipseCon have a real sense of community, attending this conference also meant I experienced the worldwide IBM community – meeting lots of colleagues I had never met before. All in all, it was a great experience. 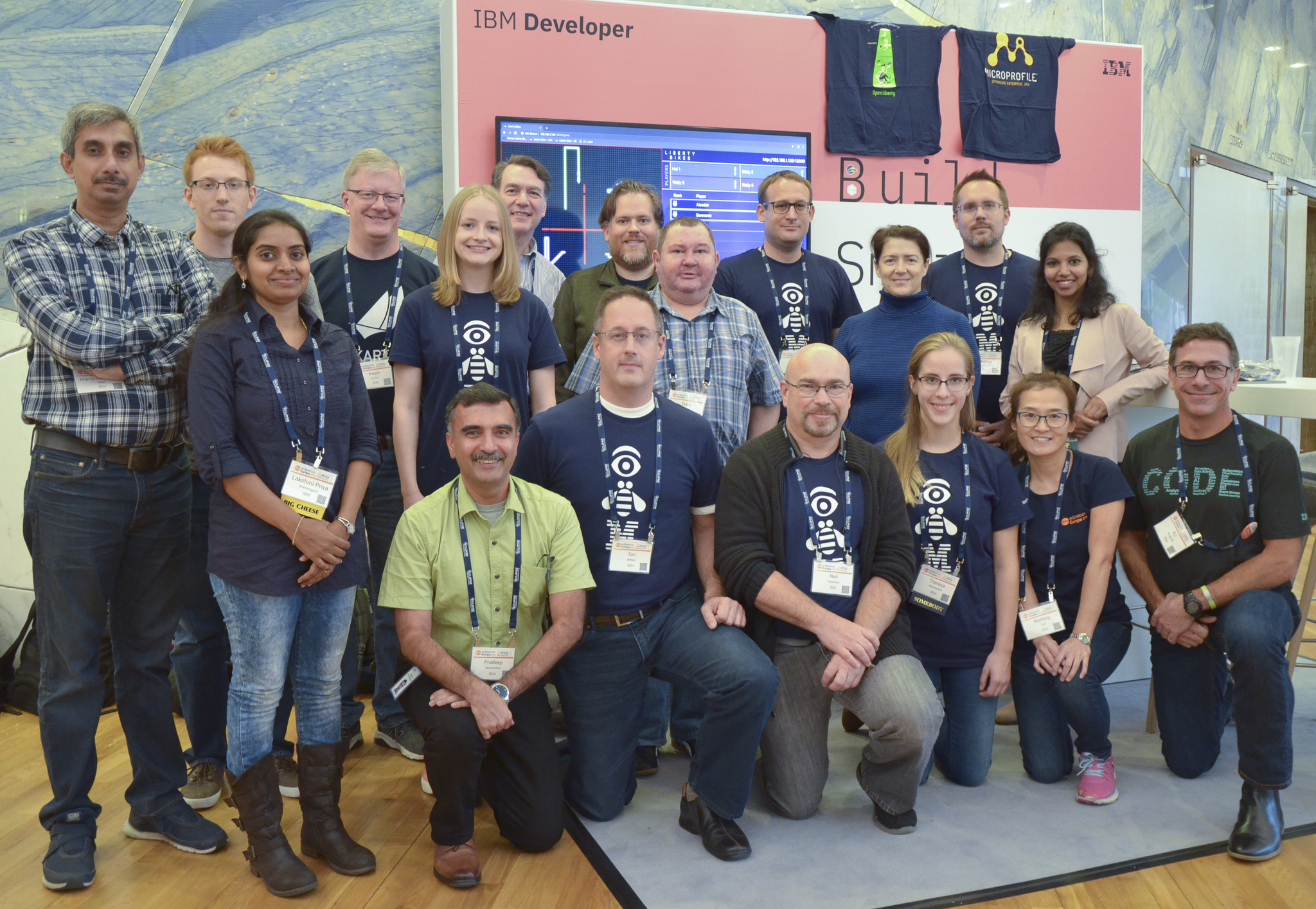 PS. If you missed this year’s EclipseCon Europe, the Eclipse Foundation will soon be posting videos of the sessions on YouTube.

Going serverless with Java and Quarkus

Use Elasticsearch in your Java applications