How to validate your GraphQL queries with ESLint

Get some quick tips for how to get syntax validation, schema validation, and highlighting working with GraphQL.

Extracting usable data from various API endpoints can be tricky. I faced this problem recently when I wanted to write a script to gather information about some users and repositories on GitHub. In the past, I’d used GitHub’s RESTful API, and pieced my data together from a slew of endpoints.

Even though my knowledge of GraphQL was limited, I decided to take the learning opportunity and try GitHub’s GraphQL API.

In this blog post, I describe how I got started configuring my development environment for GraphQL syntax validation, schema validation, and highlighting.

My first step was to fire some test queries at the API. I quickly found that GraphiQL is an indispensable tool to do this. Importantly, GraphiQL consumes GraphQL’s introspection system to provide inline documentation and validation, which means you don’t have to keep switching contexts back to your web browser to view the API documentation. It’s great!

I got my queries working in GraphiQL, and began to implement the script.

To make my queries, I decided to use @octokit/graphql, which provides a very thin client aimed at GitHub. @octokit/graphql does not provide an object-oriented API; there are no classes to instantiate or methods to call. The module exports a single async function which accepts a query, query parameters, and headers (including an auth token).

Here’s an example, lifted from the documentation:

Note: Mind the top-level await there.

The contents of repository (as of this writing) looked like this:

I pasted my query into VSCode, and got my data. Hooray!

But my query was wrong. It worked, sure, but it didn’t have all the data I needed. As I tweaked the query in my editor, I realized I was missing three things that GraphiQL should have provided me:

I assumed I was not the first person to have this problem. I know I had a special case because to JavaScript a GraphQL query is just a string. To perform validation, such a tool needs to know if any given string contains GraphQL.

I set out to find solutions.

A GraphQL plugin for ESLint

As expected, somebody did solve this problem already. The nice people at the Apollo platform have a plugin for ESLint, eslint-plugin-graphql which performs the validation. Not only does it validate syntax, it also validates against a specific GraphQL schema. So, if I misspelled a GraphQL object unique to the GitHub API, like “ropesitory” in the following listing:

That’s the promise, anyhow. It requires a bit of extra setup to get working (depending on your client) which I’ve detailed below. In particular, my client (@octokit/graphql) accepts plain strings as queries. Regardless of the client, you do need to provide ESLint the GraphQL schema, so it knows which objects are which and where they live.

To configure eslint-plugin-graphql, I needed to get the GitHub v4 API’s GraphQL schema. The schema is a JSON file which you can derive from the introspection system in the API. Because I was using @octokit/graphql, I was able to use the associated schema on npm (@octokit/graphql-schema), so I didn’t have to use a tool (such as graphql-cli) to download or create it.

Note: The eslint-plugin-graphql module does not export any “recommended” settings. You need to list each rule (there are only a handful, so it’s not a big deal).

These rules — except for graphql/template-strings — were pretty self-explanatory to me, even with a beginner’s knowledge of GraphQL.

The env property of the graphql/template-strings rule is a choice of several supported GraphQL client libraries. My queries were raw GraphQL (as you’d use in GraphiQL), so I used literal for the env value.

But I got tripped up on the tagName property. What’s that all about?

Fortunately, the eslint-plugin-graphql README provides one you can copy and paste:

This is essentially an “identity” function that compiles the template string (and any substitutions) passed into it.

Other strings in my code (e.g., result above) are not interpreted as GraphQL queries because they do not use this tagged template function.

Note that you don’t need to name the function gql. You can use whatever name you wish, as long as it’s a valid function name and specified in the tagName prop of the graphql/template-strings rule (back in the ESLint config file).

After implementing my gql function, I was ready to validate using eslint.

I decided to validate my script (script.js) container using a named operation and my misspelled object:

Failure is success! Good is bad! Up is down!

Now that this was working, I could set up VSCode. 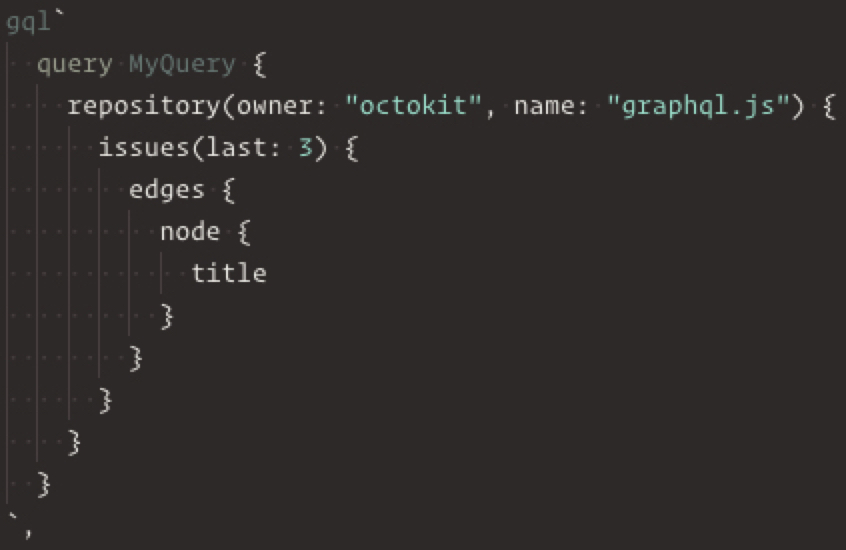 I’ve taken you through my short journey to getting syntax validation, schema validation, and highlighting working with GraphQL. While perhaps a little fiddly, eslint-plugin-graphql is a powerful tool, and is able to validate your queries regardless of which client you’re using. Happy querying! (. . . and mutating?)

Deploy a Vue.js application on IBM Cloud with a CI/CD pipeline