Hot topics at this year's JAX conference were serverless, microservices, and cloud-native applications. There were great talks on cloud technologies such as Kubernetes and Apache…

Last year the JAX conference in Mainz was an awesome experience. Last week our team returned for JAX 2019, and it was even better. This conference focuses primarily on enterprise technologies, agile methodologies, and software architectures. The high standard was clear from the quality of talks we attended, which contained a lot of practical information. Hot topics at this year’s conference were definitely serverless, microservices, and cloud-native applications. There were also great talks on cloud technologies such as Kubernetes and Apache Cassandra, and other presentations covered JVM technology and Java language features.

At the annual JAX conference, there are typically 2,000 attendees. Not only were there familiar faces from the increasingly familiar developer community here in Germany, but also some from the 2018 JAX conference. It’s fascinating to learn that even the shorter booth interactions make a mark and can leave lasting impressions. Several attendees were wearing our CODE t-shirts. Some even donned this year’s Eye Bee M rebus t-shirts straight away! 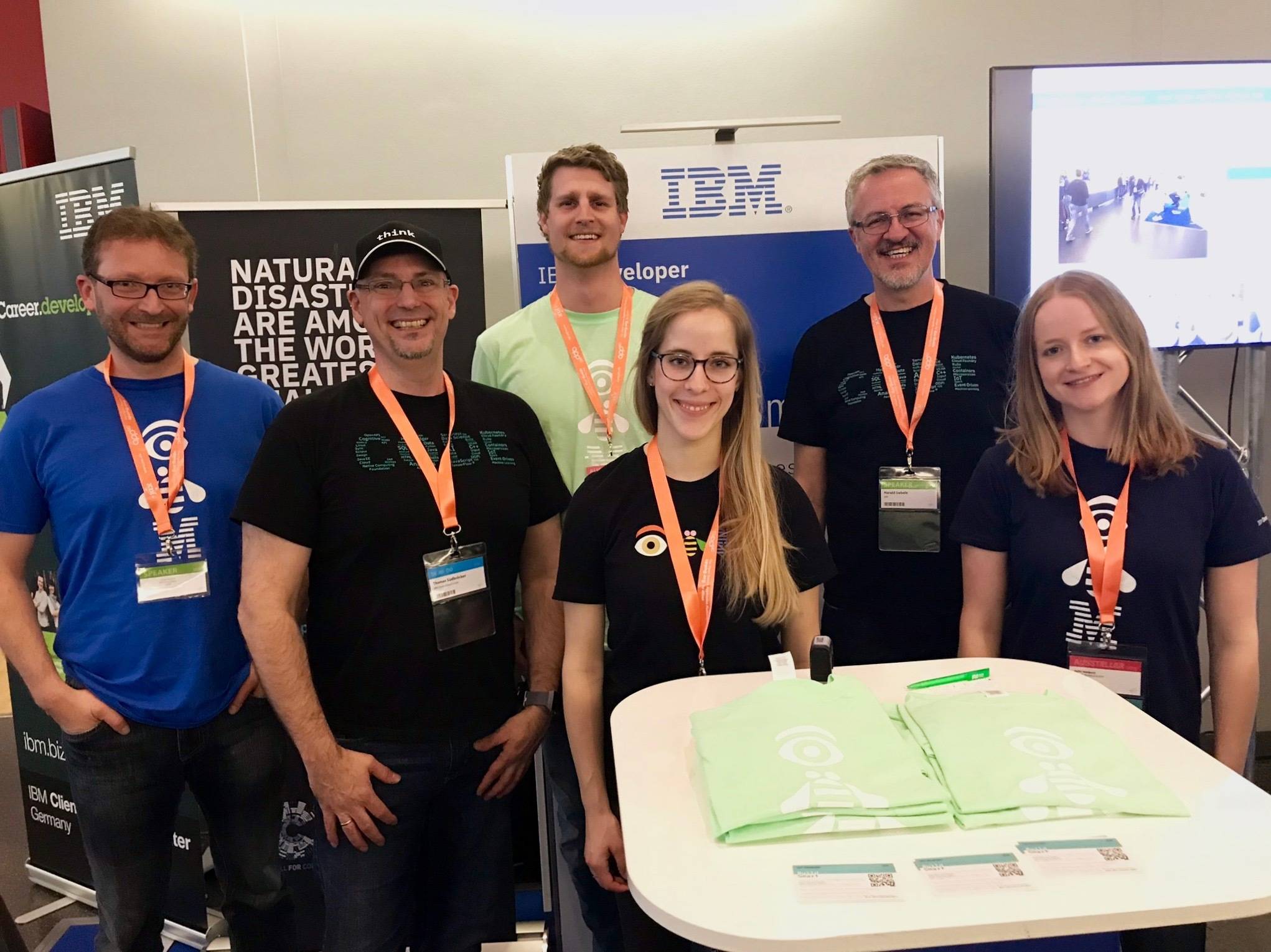 By the way, did you know that graphic designer Paul Rand created the IBM rebus logo back in 1981?

The demo at our IBM booth was highly popular. Blue Cloud Mirror is an interactive web app that our team of Developer Advocates created from scratch. The game has two levels: players are challenged to show five specific emotions and then five specific poses in the shortest amount of time possible. Ultimately the game is a fun way of demonstrating 15 different cloud technologies. For example, Blue Cloud Mirror works with Cloud Foundry, a serverless architecture, and an on-premises environment. 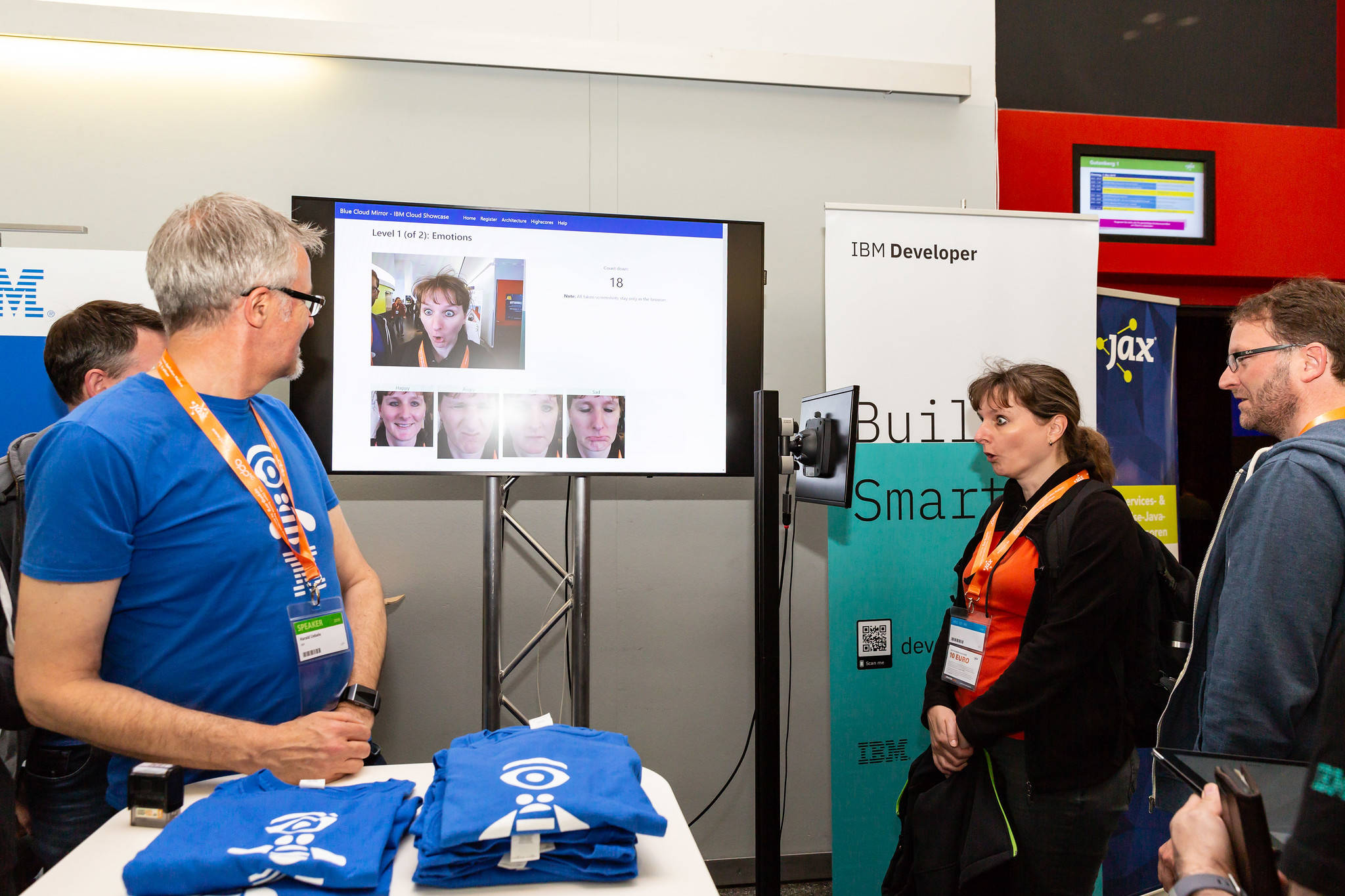 Developer Advocates Harald Uebele and Niklas Heidloff shared their Cloud Native Starter in a session titled How do I develop my first cloud-native applications?. Check out the slides for details. 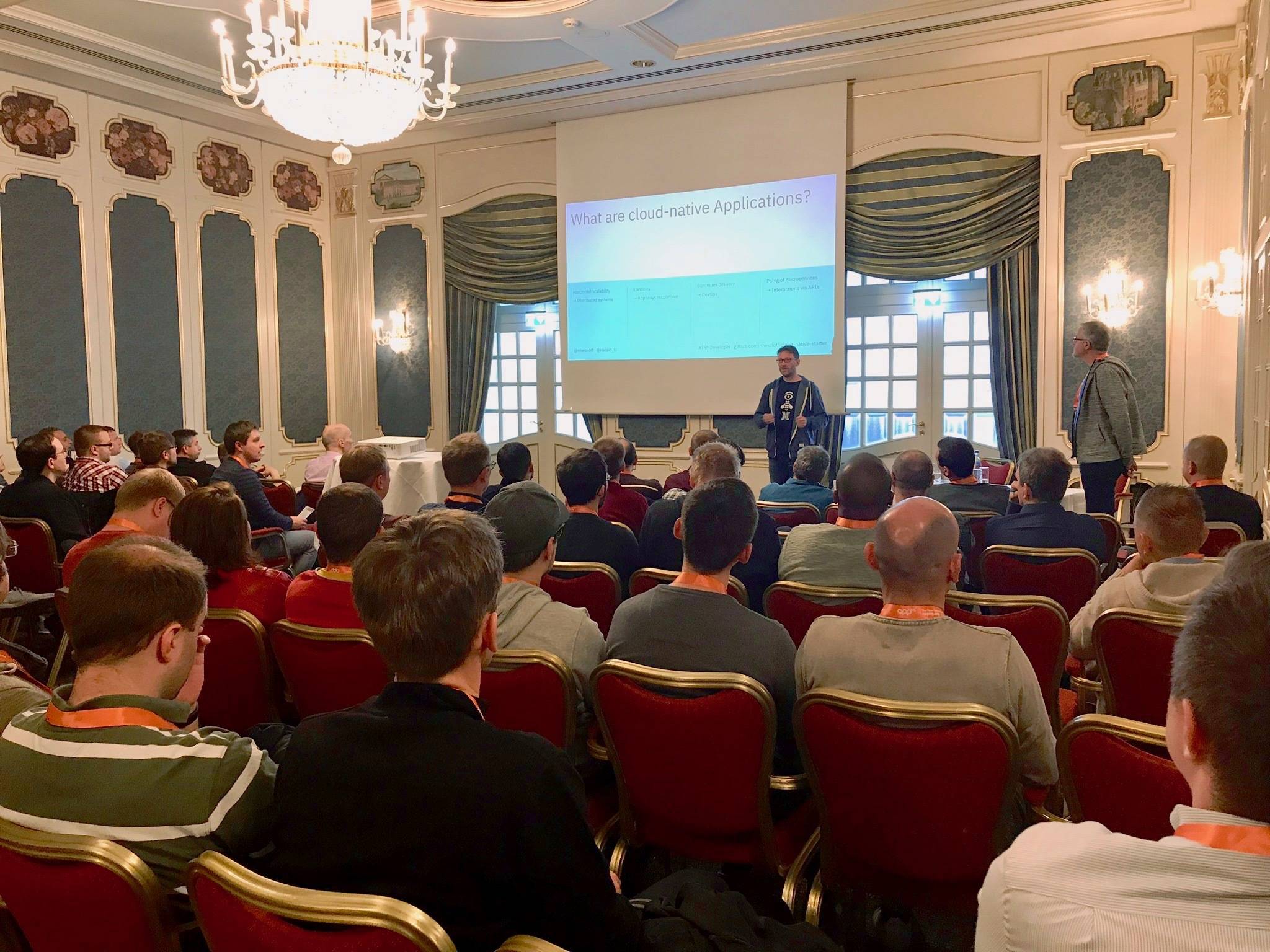 They demonstrated how easy it is to use key functions of Kubernetes and Istio for microservices, independent of the programming language. Using these technologies together with Java Enterprise Edition and Eclipse MicroProfile, the duo shared how to roll out and manage these applications, using the most of the capabilities that the platforms offer. Tips followed on resiliency, traffic management, authentication and authorization, and observability. I heartily recommend checking out their cloud-native-starter Open Source project on GitHub.

Once again, JAX brought our team together with colleagues from other parts of IBM and the world. We were honored to welcome Distinguished Engineer and CTO of Container and Linux OS Architecture Strategy, Phil Estes. From across the pond, Phil came to JAX to give a keynote talk titled Containers. Cloud. Microservices. Open Source… for enterprises. Real Life or Fantasy? These four buzzwords are on everybody’s lips. Even if you weren’t at the conference, you can view the presentation slides.

Throughout the keynote, he discussed updates and the effect they can have on speed, security, and efficiency. Companies are constantly striving to improve all three, of course. For each aspect, Phil shared the latest developments, providing real-life examples from IBM Cloud customers. He showed how companies are using these technologies to achieve measurable improvements with faster, more secure, and more efficient development. Phil also shared IBM’s own transformation to a cloud-native, container-first approach to our own service delivery. Interested in learning more? See Open Source at IBM. 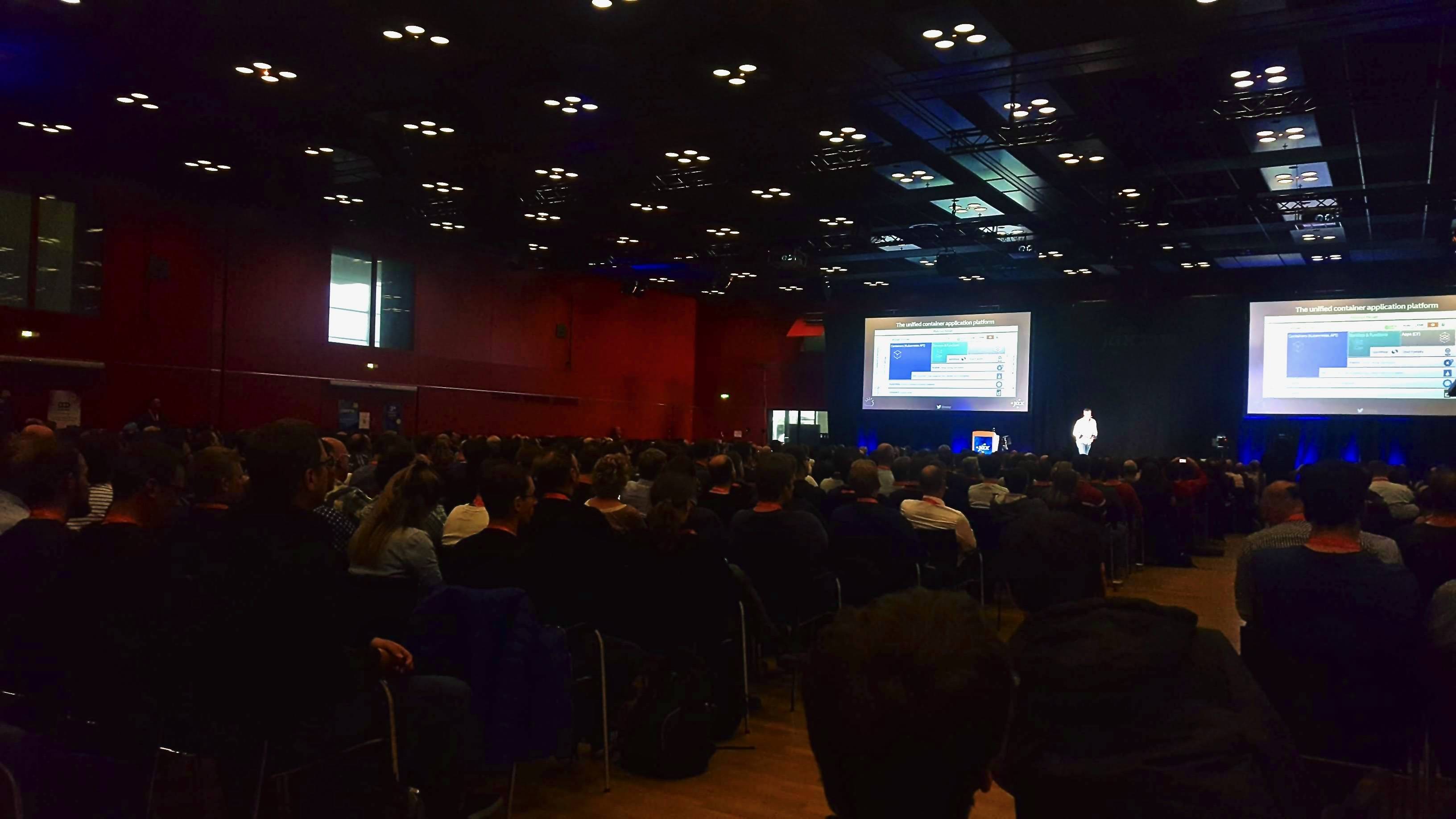 We’re thrilled that Theresa Mamarella flew in from Canada and joined us at JAX. In her Migrate Early, Migrate Often session, she discussed the demanding new release cycles for OpenJDK, sharing concrete continuous migration strategies and tools necessary for Java developers to adapt. Theresa reassured us that there’s no reason to be afraid about upgrading and deprecation. Rather, she advised us to “eat the elephant a bite at a time,” she said. Many vendors provide support for OpenJDK builds, and this talk was both very welcome and popular. Check out Theresa’s slides here on GitHub: Migrate Early, Migrate Often.

In Steve’s second talk, he examined the Java ecosystem and its open future in the cloud. Java developers face many changes with new technologies and ideas, and he dove into the facts and figures characterizing the landscape and future directions. Steve ended with another provoking ultimatum: will the Java community continue to rise to the challenge of keeping Java vital, healthy, and moving forward?

We were also joined by the IBM Client Innovation Center, a team that is focused on hiring developer talents. To create your own career path, you can check out open positions. 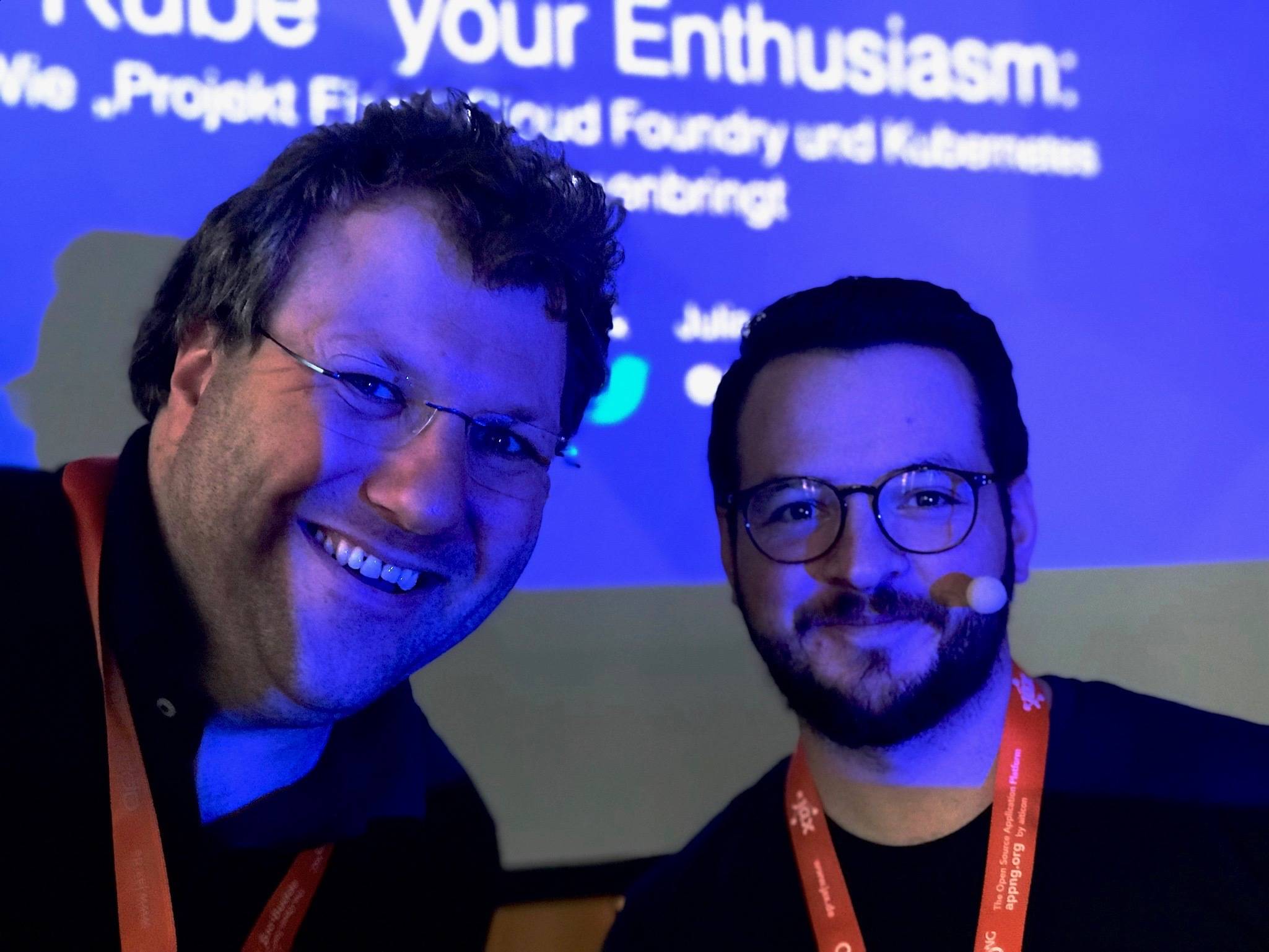 The “Kube” your Enthusiasm session

Our colleagues Simon Moser and Julian Skupnjak presented Project Eirini, a Kubernetes back end for Cloud Foundry. Not familiar with Eirini? This incubation project allows complete containerization and a Kubernetes-native version of Cloud Foundry. It offers an alternative orchestrator to Diego and simplifies the platform and making it easier to manage. This session included live Eirini demos on Kubernetes, following the code on its journey from your laptop to first-class deployments, pods, and services in your Kubernetes Cluster.

So, what else did we do? Our team gave out promo codes for IBM Cloud. We believe it’s important for developers to be able to try out and test as much of our cloud platform as they can. Some JAX attendees were not aware that IBM has a free account available, which does not even require a credit card. 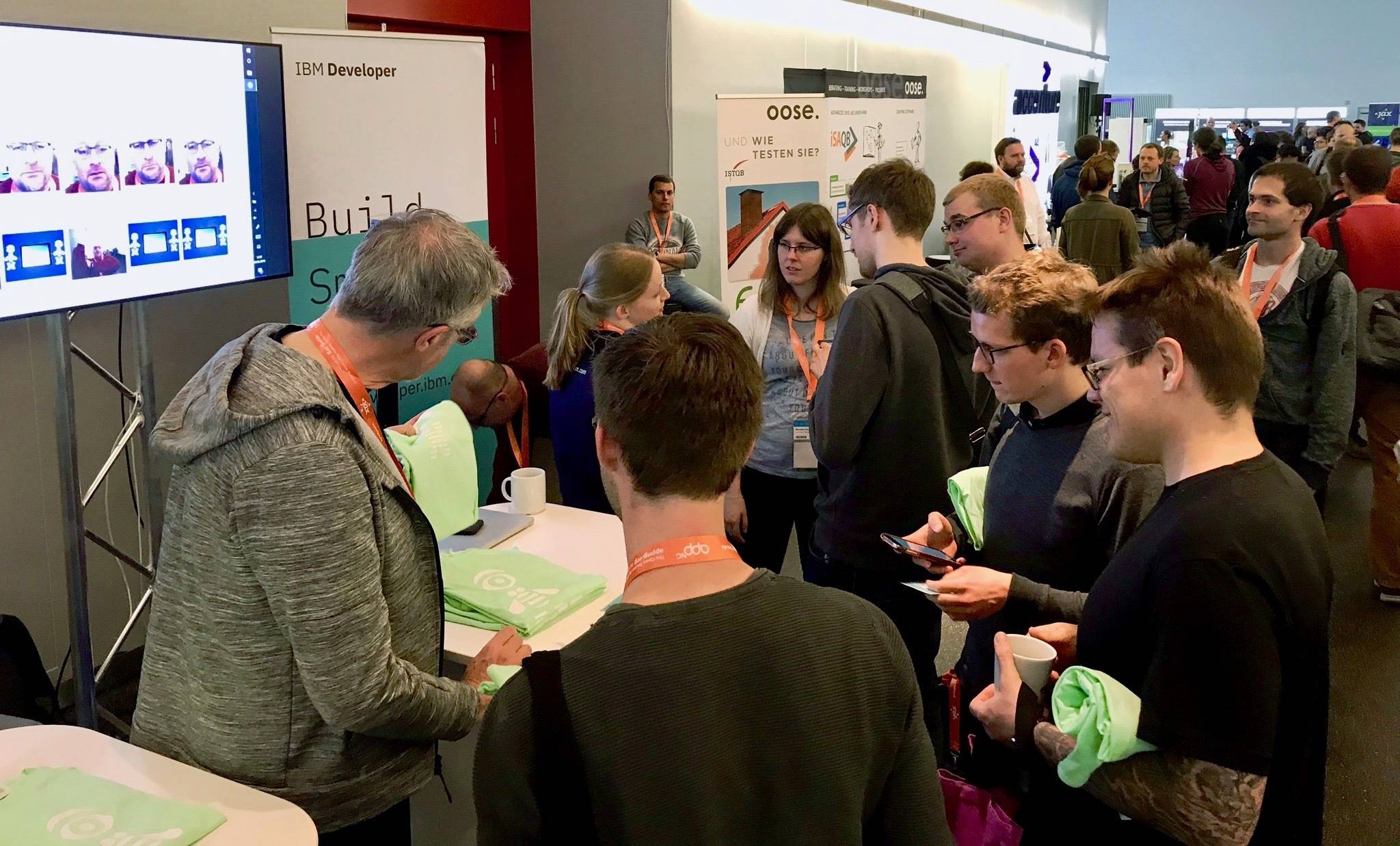 The JAX organizers curated a varied program, filling the week with exciting activities. On Monday evening, there was a social event at a nearby vineyard, which offered speakers a casual environment to connect with attendees, and the friendly atmosphere sparked great conversations. On Wednesday, the annual JAX jogging event took place, and a large group sporting neon JAX T-shirts jogged together along the Rhein river. Beer and snacks were provided for refreshment afterward – it was a great bonding opportunity!

At the conference, it was a delight to share projects that our team has been working on. On a personal note, I celebrated a year on the Developer Advocacy team in Germany, Austria, and Switzerland. Annual events like the JAX conference provide the perfect opportunity to reflect on the past year, changes, and progress.

Looking into the future, we have many upcoming events as part of the Think at IBM platform in one of Europe’s most pulsing cultural centers. Let’s expect more from technology.

Our wider IBM team is available in the Bikini Berlin Concept Shopping Mall from May 20 to June 30. During that time, our developer team also is at the JSConf EU, We Are Developers, and DevOpsCon conferences. And Winter JAX returns from November 4-8, 2019, in Munich.

Until we see you at an upcoming event, here are the highlights from our Twitter feed for JAX 2019:

Combine 15 cloud technologies on one game application on the web