LoopBack was awarded the 2019 API Award for the 'Best in API Middleware' category. Learn more about the award and what made LoopBack stand out.

LoopBack won the 2019 API Award for the “Best in API Middleware” category. LoopBack is a highly extensible, open source Node.js framework based on Express that enables you to quickly create dynamic end-to-end REST APIs and connect to backend systems such as databases and SOAP or REST services. 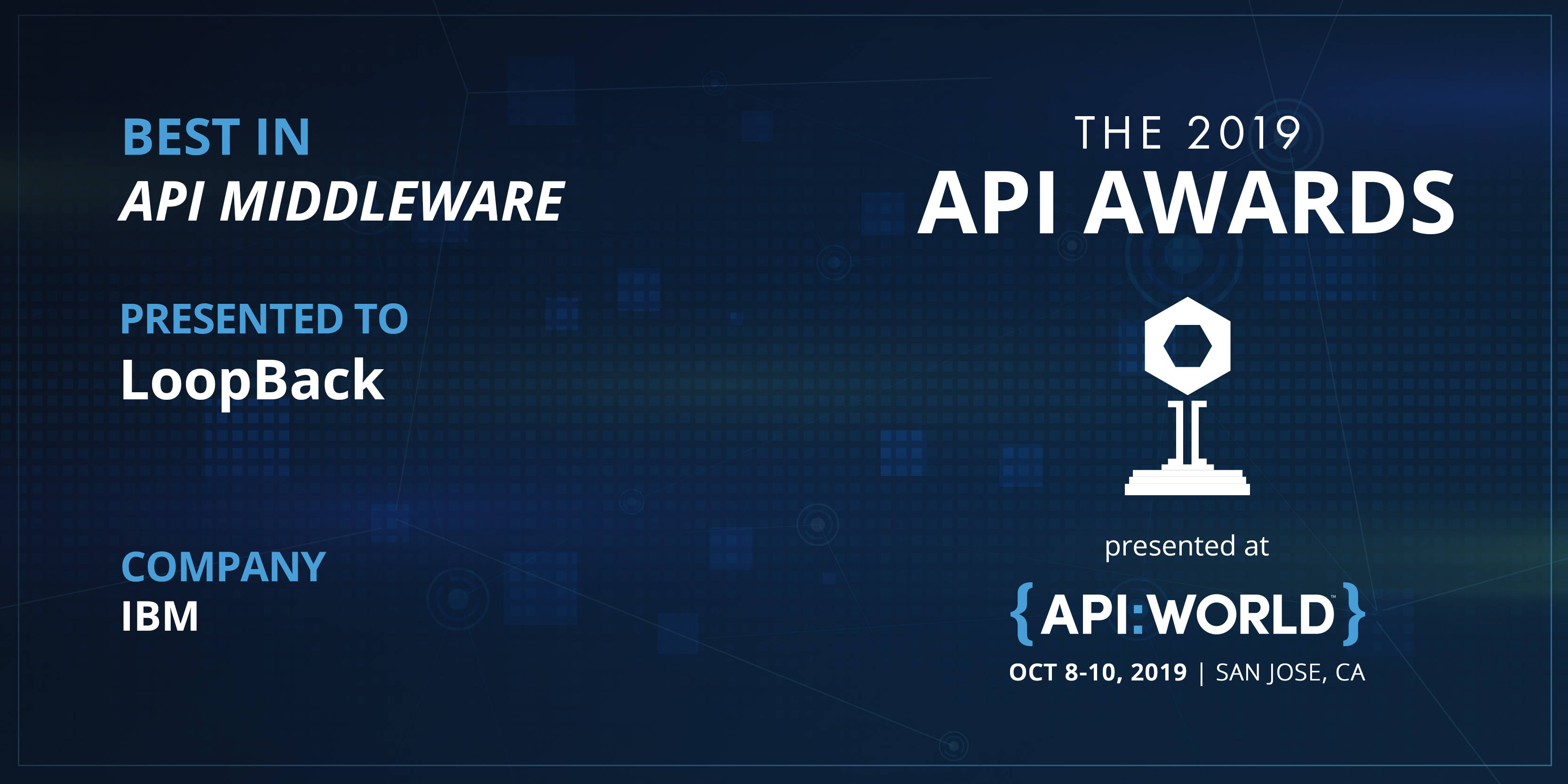 The 2019 API Awards received hundreds of nominations, and the Advisory Board to the API Awards selected LoopBack based on three criteria:

“IBM is a shining example of the API technologies now empowering developers and engineers to build upon the backbone of the multi-trillion-dollar market for API-driven products and services. Today’s cloud-based software and hardware increasingly runs on an open ecosystem of API-centric architecture, and IBM’s win here at the 2019 API Awards is evidence of their leading role in the growth of the API Economy,” said Jonathan Pasky, executive producer and co-founder of DevNetwork, producer of API Word and the 2019 API Awards.

The LoopBack team is thrilled that all of their hard work on LoopBack is being recognized by the larger Node.js community.

“We’re thrilled and honored to receive the Best in API Middleware 2019 award from API World,” said Raymond Feng, co-creator and architect for LoopBack. “It’s indeed a great recognition and validation of the LoopBack framework, team and community.”

Six and half years ago, the team created LoopBack at StrongLoop with the goal to help fellow developers kick off their API journey with the ideal Node.js platform. With the support of the fantastic Node.js ecosystem, the team built on top of open source modules such as Express and made it incredibly simple to create REST APIs out of existing datasources and services.

The StrongLoop team’s bet on open APIs and Node.js was right. The project and community have grown significantly.

The StrongLoop team joined with IBM API Connect team in 2015 to better position LoopBack as a strategic open source project. LoopBack 4 is the second generation of the framework. Version 4 incorporates what the team has learned with new standards and technologies such as TypeScript, OpenAPI, GraphQL, and cloud-native microservices to build a foundation for even greater flexibility, extensibility, composablity, and scalability.

“More and more features are shipped and being built by us and the community. The LoopBack team strive to bring best practices and tools. We love Github stars. It’s simply rewarding to create something valuable for the open source community!” says Feng.

Read the original announcement by API:World.

You can help shape the future of LoopBack with your support and engagement. Work with us tomake LoopBack even better and meaningful for your API creation

Get started with Node.js and LoopBack 4

Mine data breaches for insights

Develop a hybrid mobile app with a cloud-native back end

Build a MERN web app in an hour

An introduction to Node-RED