Why now’s a great time to use the Tekton Dashboard

Over the past year, Tekton’s usage has grown significantly. However, as a Tekton enthusiasts, I’ve grown tired of trawling through YAML, using kubectl logs, describing or getting pods, and either forgetting to use -n or using kubens every few commands. I bet you can relate and are probably thinking, like I am, that there has to be a better way to learn about what’s going on with your Tekton resources.

In this blog, I discuss the Tekton Dashboard, which has been around for a while. The Tekton team is always adding new features, listening to community feedback, and continuously pushing out releases. It’s certainly not intended as a guide to all things Tekton, but definitely serves as a great incentive to give Tekton a try and hopefully contribute to the community. It also resolves a few of the issues I mentioned above. Now let’s dive in!

Where and how to run a Tekton Dashboard

As well as providing comprehensive pages for your Tekton resources, such as PipelineRuns, TaskRuns, and tasks, the Tekton Dashboard also provides an interface for creating and deleting Tekton annotated secrets and ServiceAccounts. These are important and are usually used if you’re pushing to an image registry requiring authentication or interacting with a GitHub repository. You can always read up on how secrets work and whether or not you’ll need them.

Create a PipelineRun from scratch

Did you know that you can create PipelineRuns from scratch? This includes the ability to create associated secrets and PipelineResources too.

PipelineRuns are associated to ServiceAccounts. You need to ensure they have the secrets you need patched to them first. The image below illustrates what that would look like. 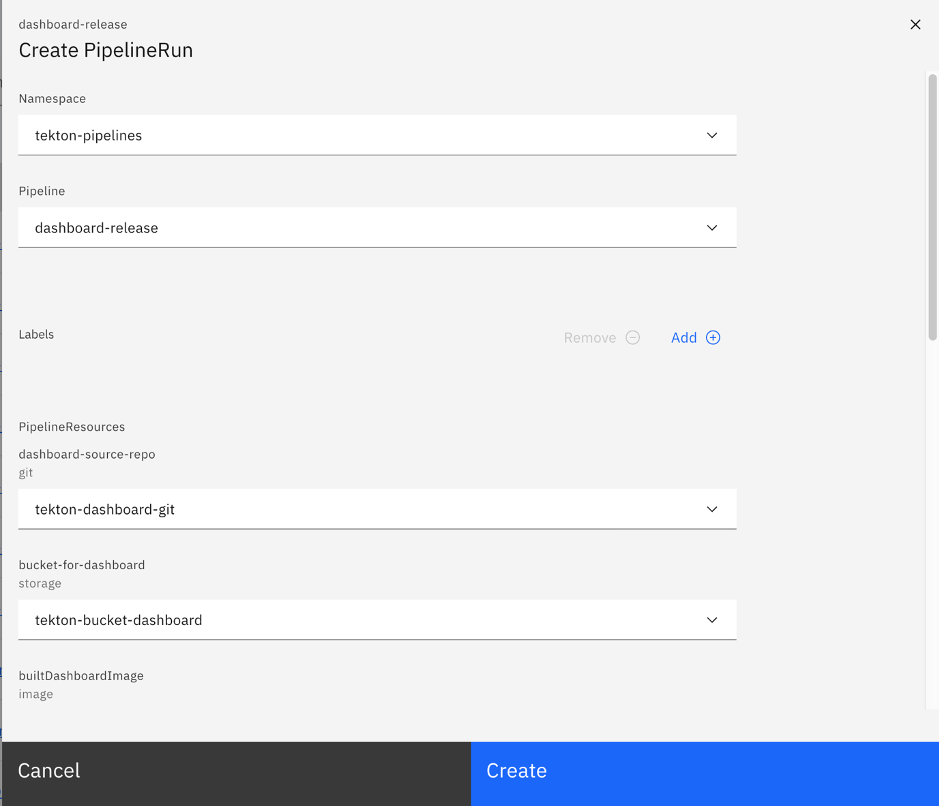 You also have the ability to import resources from Git. A simple pipeline is provided as part of the install and panelling exists, such that you are directed to a repository and a PipelineRun is started.

GitOps, a way of implementing continuous deployment for cloud-native applications, is popular and doing it through Tekton is even cooler. As an added advantage, there is a log (in the form of a PipelineRun and its pod) that tells you exactly what happened and when.

The image below shows the current implementation of the import resources page. You’ll notice a variety of options are available so you can import the resources into a namespace of your choice, and the directory of your Tekton resources can be provided. 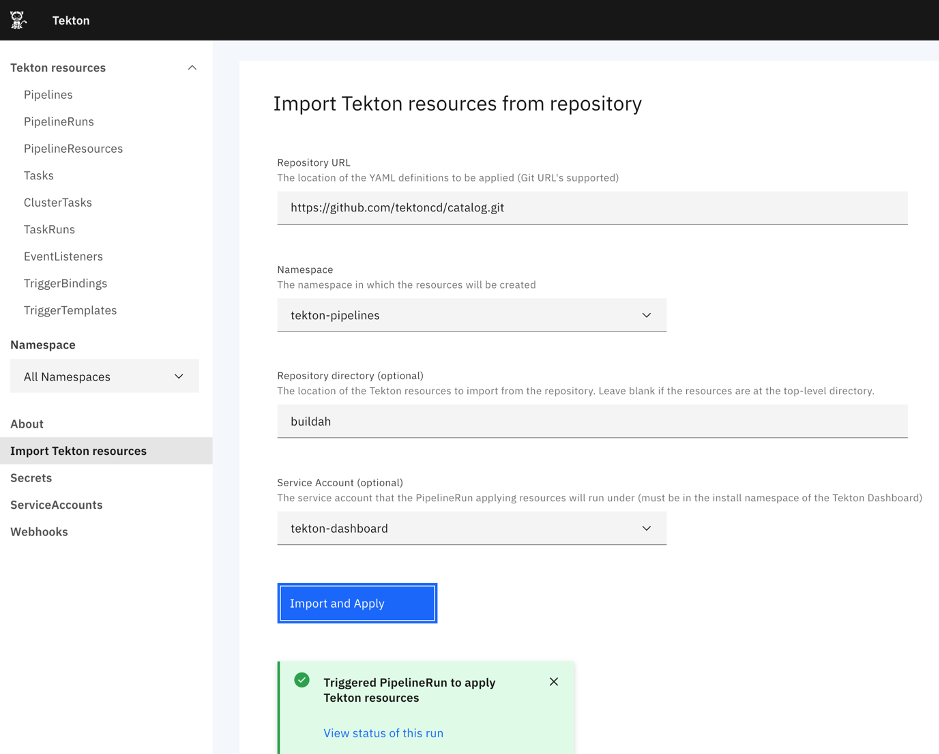 It’s useful to prevent dangerous operations from running. Tekton Pipelines can be super powerful, and you may not want just anyone creating secrets, PipelineResources, or pipelines. A good case in point is the Tekton Dashboard deployed as part of the Tekton “dogfooding” cluster, which is how the Tekton releases themselves are done.

This is a case of installing the appropriate file. Just use a -readonly suffix and then everything’s handled for you.

You’re finally ready to begin browsing a few Tekton projects and maybe begin contributing! There are many different repositories under this organization and you’re as welcomed in one as you are in any. If you’d like to raise issues or create a pull request, that’s even better! Here’s how to get started:

Now’s a great time to get involved with Tekton and having a dashboard provides a convenient means to view what’s going on and to create resources that your Tekton Pipelines need to run. There’s plenty you can do through Tekton that isn’t covered through this guide. I encourage you to check out the examples available across the Tekton repositories and either create something awesome, leave a bit of feedback, share the knowledge, help others, or all of the above!