There are few guarantees when it comes to natural disaster, but one near certainty is that victims will bombard emergency call centers with requests for help. This can become overwhelming very quickly, and a solution is needed to handle these massive volume spikes. That’s because when these call centers become saturated, lives are put at risk. Technology can play a major role in helping these call centers assess and prioritize calls based on severity rather than simply addressing them based on which victim calls first.

That’s where AsTeR comes in. A team of European graduate students from the University of California, Berkeley — Meryll Dindin, Florian Fesch, Thomas Galeon, Pierre-Louis Missler, and Oskar Radermecker — built this application to filter and assess calls when a human is unable to immediately respond.

“When we look at how emergency calls are dealt with nowadays, it’s very old technology,” Fesch said. “AsTeR seeks to improve that by bringing state-of-the-art technology to solve this big issue, especially when large-scale disasters happen. We do this by helping call centers figure out which calls are most important and maximizing first responders’ ability to help people.”

The team kicked off the AsTeR idea during a UC Berkeley hackathon in April, which IBM hosted along with Clinton Global Initiative University. It was there that the team first tapped into Galeon’s experience as a first responder in France to design the API. Galeon served as a firefighter in France and trained in a call center.

“That was very interesting for me,” Galeon said, “because I realized that you’d often spend three, four, five minutes with a victim on the line, and at the end of the day you wouldn’t get that much information. Most of it would be just reassuring the person. But sometimes, you could actually trim that down to something like five seconds. That made me realize when there are a lot of calls coming in, typically during a natural disaster, that are just clogging up the line and preventing people from actually getting through to operators and getting the help they’re needing, so that’s really the premise of AsTeR.”

At its core, AsTeR is an API that call centers would be able to integrate into their existing technology. The core feature that the team developed first, was the natural language processing operators, using IBM Watson Studio. Once you have the audio signal coming in, AsTeR transforms it into a transcript using IBM Watson’s speech-to-text technology.

“So first part is feature extraction, sentiments analysis and keywords extractions,” Dindin said. “And on top of that, we also use our own open source data sentiments. So we just extract words from that in a smart way, transformed with this first match rates, which is fed into a classifier. And we have our own optimization on top of that, so we’ve got the best model. And from that it gives you a class whether the information is relevant.” 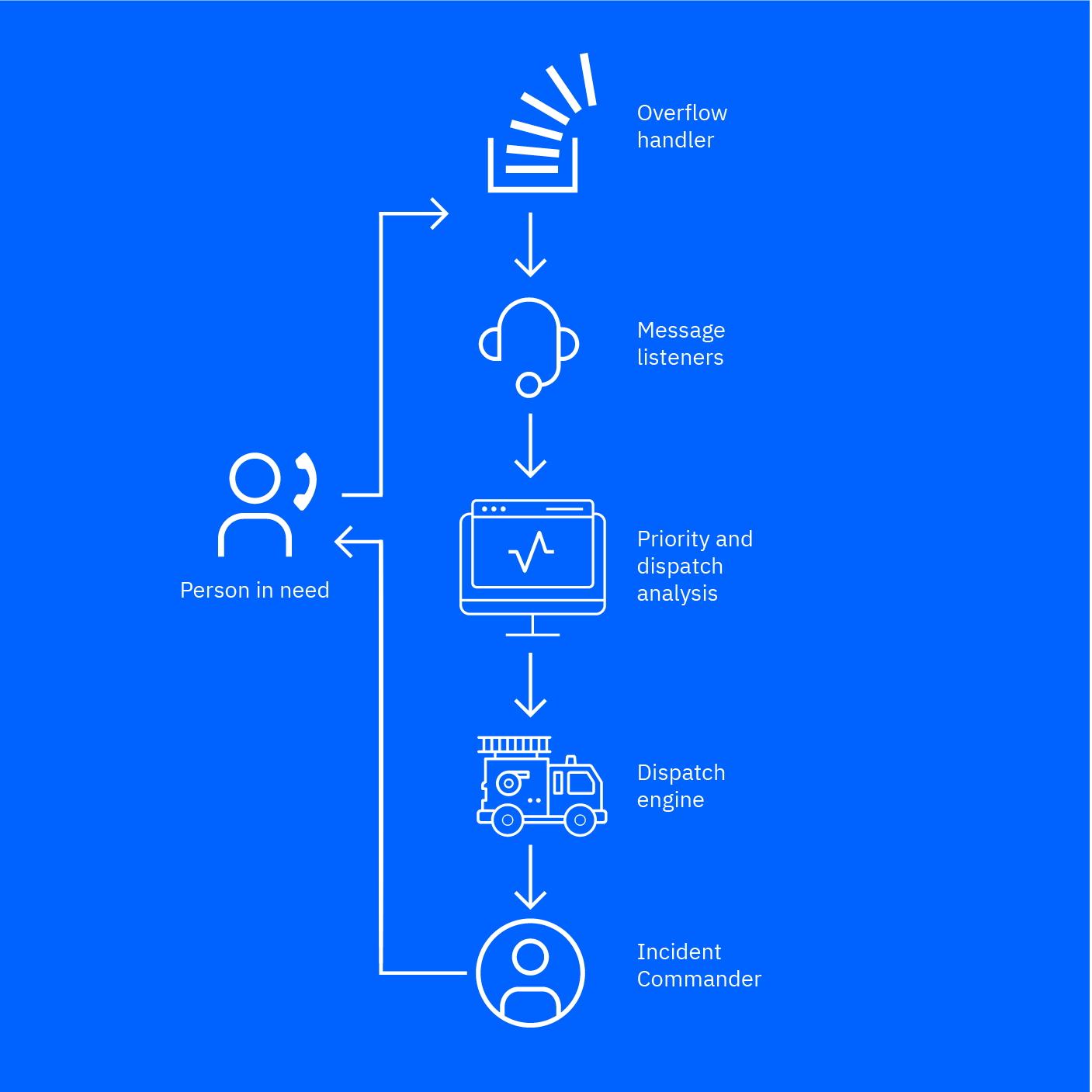 Calls are then classified based on their severity — whether there are potential fatalities, injuries, disease, flood, fire — and the call is given a priority score. The team uses IBM Cloud Foundry for the SQL database and another IBM service for the speech-to-text endpoint.

The team decided to build AsTeR as an API so call centers could easily tap into it.

“Your emergency call centers already have software,” Dindin said. “Just plug in the endpoint that will be receiving audio signal and just train it for a time. Then you can access a database that is our own, being processed online on a scalable infrastructure — that’s the core product. That’s why an API is so great in getting them back the priority score, the geo-localizations, the hotspots.”

Ultimately, the AsTeR team sees this as potentially more than an API and an information collection platform that tackles analyzing emergency calls. A live map feature, which is integrated in the solution, could also display credible data sources such as government, drones or satellites. AsTeR could become a dashboard that aggregates all the information first responders need to organize rescue operations.

The team hopes to bring AsTeR to an open source model and encourage other developers to help them build out the technology. From there, the team would like to roll out the beta version for call centers to test the app.

Mostly, the team is just excited to bring their solution to emergency responders to help when the next disaster strikes.

“Natural disasters can occur everywhere and to anyone; we’re never ready enough,” Radermecker said. “And just by looking at what is being done, I feel like something more is possible, and I think addressing it after the natural disaster is too late. It’s going to take initiative, it’s going to lay the groundwork and doing that early enough is something we can control and it’s crucial.”