Review the history of the enterprise Kubernetes application OpenShift and the intertwined paths with IBM Cloud Kubernetes service.

The recent introduction of Red Hat® OpenShift® as a choice on IBM Cloud sparked my curiosity about its origins, and why it is so popular with developers. Many of the developers I sat beside at talks, or bumped into at lunch, at a recent KubeCon Conference, mentioned how they used OpenShift. I heard from developers with financial institutions running analytics on transactions and with retailers creating new experiences for their customers.

OpenShift is a hybrid-cloud, enterprise Kubernetes application platform. IBM Cloud now offers it as a hosted solution or an on-premises platform as a service (PaaS). It is built around containers, orchestrated and managed by Kubernetes, on a foundation of Red Hat Enterprise Linux.

With the growth of cloud computing, OpenShift became one of the most popular development and deployment platforms, earning respect based on merit. As cloud development becomes more “normal” for us, it is interesting to consider where OpenShift fits, as another tool from the toolbox for creating the right solution. It might mix with legacy on-premises software, cloud functions, Cloud Foundry, or bare metal options.

In this blog post, my colleague Olaph Wagoner and I step back in time to understand where OpenShift came from, and we look forward to where it might be going in the world of enterprise application development with Kubernetes.

The following graphic shows a timeline of OpenShift, IBM, and Kubernetes: 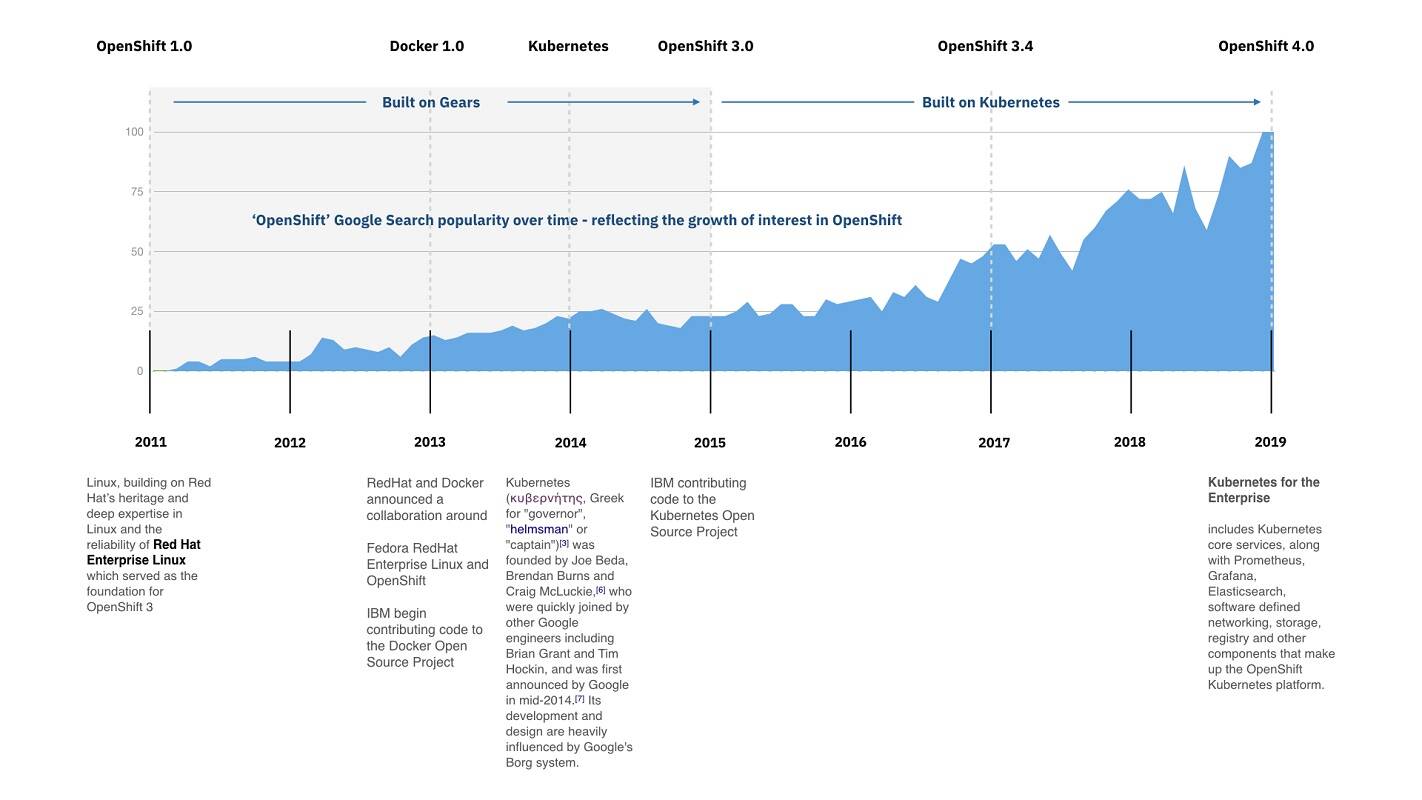 OpenShift was first launched in 2011 and relied on Linux containers to deploy and run user applications, as Joe Fernandes describes in Why Red Hat Chose Kubernetes for OpenShift.

When OpenShift was born in 2011, it relied on Linux containers to deploy and run user applications. OpenShift V1 and V2 used Red Hat’s own platform-specific container runtime environment and container orchestration engine as the foundation.

However, the story of OpenShift began sometime before its launch. Some of the origins of OpenShift come from the acquisition of Makara, announced in November of 2010. That acquisition provided software as an abstraction layer on top of systems and included runtime environments for PHP and Java applications, Tomcat or JBoss application servers, and Apache web servers.

Early OpenShift used “gears”, which were a proprietary type of container technology. OpenShift nodes included some kind of containerization. The gear metaphor was based on what was contained. OpenShift called the isolated clusters gears: something capable of producing work without tearing down the entire mechanism. An individual gear was associated with a user. To make templates out of those gears, OpenShift used cartridges, which were acquired from Makara.

OpenShift itself was not open source until 2012. In June 2013, V2 went public, with changes to the cartridge format.

Docker was started as a project by a company called dotCloud, made available as open source in March 2013. It popularized containers with elegant tools that enable people to build and transfer existing skills into the platform.

Red Hat was an early adopter of Docker, announcing a collaboration in September 2013. IBM forged its own strategic partnership with Docker in December 2014. Docker is one of the essential container technologies that multiple IBM engineers have been contributing code to since the early days of the project.

Kubernetes surfaced from work at Google in 2014, and became the standard way of managing containers.

Although originally designed by Google, it is now an open source project maintained by the Cloud Native Computing Foundation (CNCF), with significant open source contributions from Red Hat and IBM.

According to kubernetes.io, Kubernetes aims to provide “a system for automating deployment, scaling, and operations of application containers” across clusters of hosts. It works with a range of container tools, including Docker.

With containers, you can move into modular application design where a database is independent, and you can scale applications without scaling your machines.

Kubernetes is another open source project that IBM was an early contributor to. In the following graphic you can see the percentage of IBM’s contribution to Docker, Kubernetes, and Istio in the context of the top 5 orgs to contribute to each of those container related projects. It highlights the importance of container technology for IBM, as well as some of the volume of open source work.

Red Hat announced an intent to use Docker in OpenShift V3 in August 2014. Under the covers, the jump from V2 to V3 was quite substantial. OpenShift went from using gears and cartridges to containers and images. To orchestrate those images, V3 introduced using Kubernetes.

The developer world was warming to the attraction of Kubernetes too, for some of the following reasons:

OpenShift introduced powerful user interfaces for rapidly creating and deploying apps with Source-To-Image and pipelines technologies. These layers on top of Kubernetes simplify and draw in new developer audiences.

IBM was already committing code to the key open source components OpenShift is built on. The following graphic shows a timeline of OpenShift with Kubernetes: 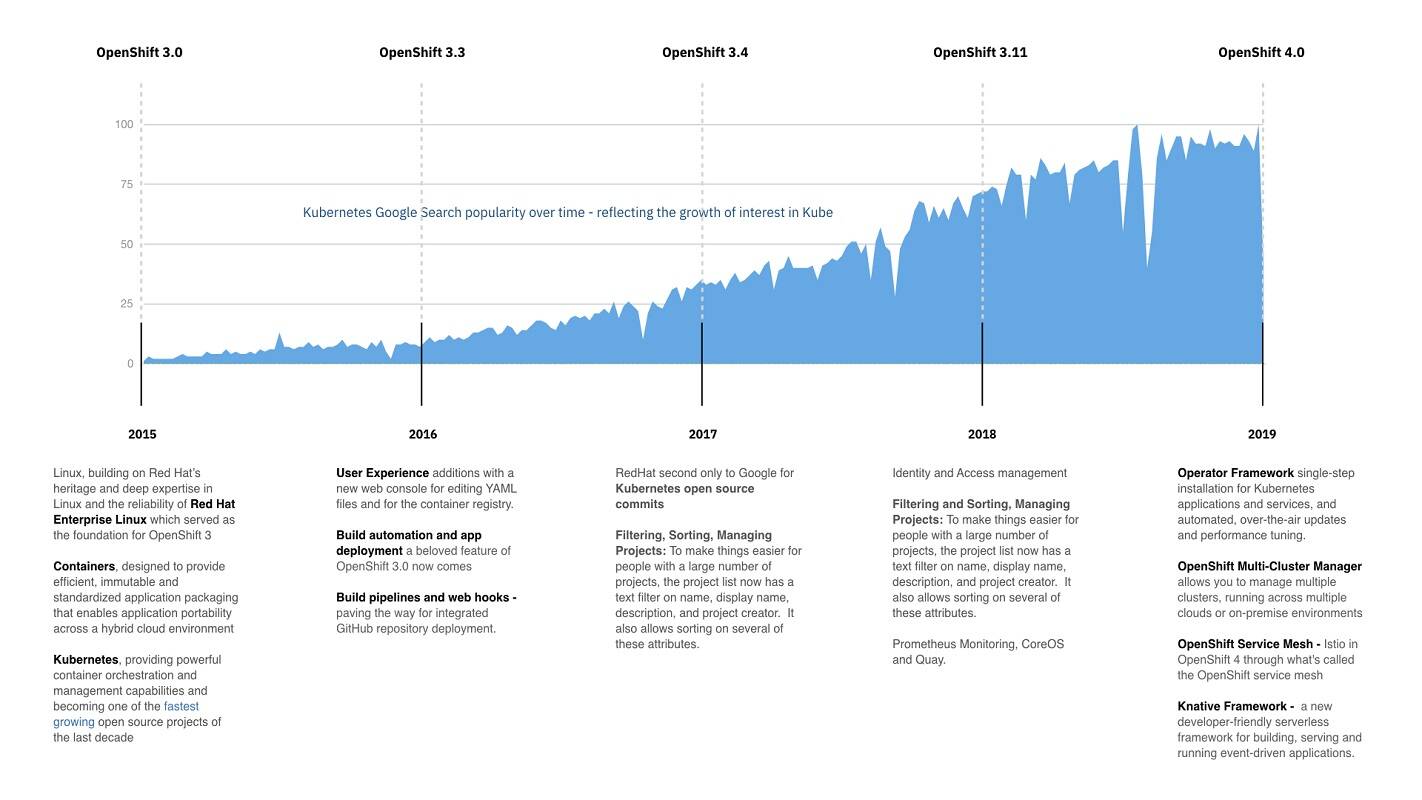 OpenShift V4.0 and the future

Red Hat clearly proved to be at the forefront of container technology, second only to Google in contributions to CNCF projects. Another recent accomplishment of Red Hat I want to mention is the the acquisition of CoreOS in January of 2018. The CoreOS flagship product was a lightweight Linux operating system designed to run containerized applications, and Red Hat is making available in V4 of OpenShift as “Red Hat Enterprise Linux CoreOS”.

And that’s just one of many exciting developments coming in V4. As shown in the previous timeline graphic, OpenShift Service Mesh will combine the monitoring capability of Istio with the display power of Jaeger and Kiali. Knative serverless capabilities are included, as well as Kubernetes operators to facilitate the automation of application management.

The paths join up here, also. IBM is a big contributor of open source code to Istio, Knative, and Tekton. These technologies are the pathways of container-based, enterprise development in the coming decade.

Researching the origins and history of OpenShift was interesting. Using OpenShift as a lens recognizes that in terms of software development, this decade really is the decade of the container.

It is impressive how much energy, focus, and drive Red Hat put into creating a compelling container platform by layering significantly, progressing the same technologies that IBM has shown interest in, and dedicating engineering resources to over the past decade.

We’re looking forward to learning and building with all of these cloud technologies in the years ahead.

Application modernization with Node.js, the Source-to-Image toolkit, and OpenShift

How templating works with Podman, Kubernetes, and Red Hat OpenShift

Simplify the lifecycle management process for your Kubernetes apps with operators