A tour of the Kubernetes source code

From kubectl to API Server

In this multi-part series of articles I will dig in and explain key portions of the Kubernetes code base and also explain the techniques I have used to help me understand the code. My goal is to provide a set of articles that will enable software developers new to Kubernetes to more quickly learn the Kubernetes source code.

In this first article, I will cover the flow through the code from running a simple kubectl command to sending a REST call to the API Server. Before using this article to dig into the Kubernetes code, I recommend you read an outstanding high level overview of the Kubernetes architecture by Julia Evans.

The command line interface for Kubernetes is called kubectl. It is used for running commands against Kubernetes clusters. When attempting to learn the Kubernetes source code, the portion of the source code that implements the command line interface is a great place to start. The command we will use to trace through the source code is the kubectl create -f command which creates a resource from a file. The resource we are creating is a single replica pod with a basic nginx container image. The specification for this resource is shown below and I placed this specification in a file called ~/nginx_kube_example/nginx_pod.yaml.

From a Kubernetes development environment we can invoke kubectl as shown in the figure below:

Now that we know what kubectl command we are running and how to run it, let’s look at where we can find the implementation of this command in the Kubernetes source code.

Locating the implementation of kubectl commands in the Kubernetes source code 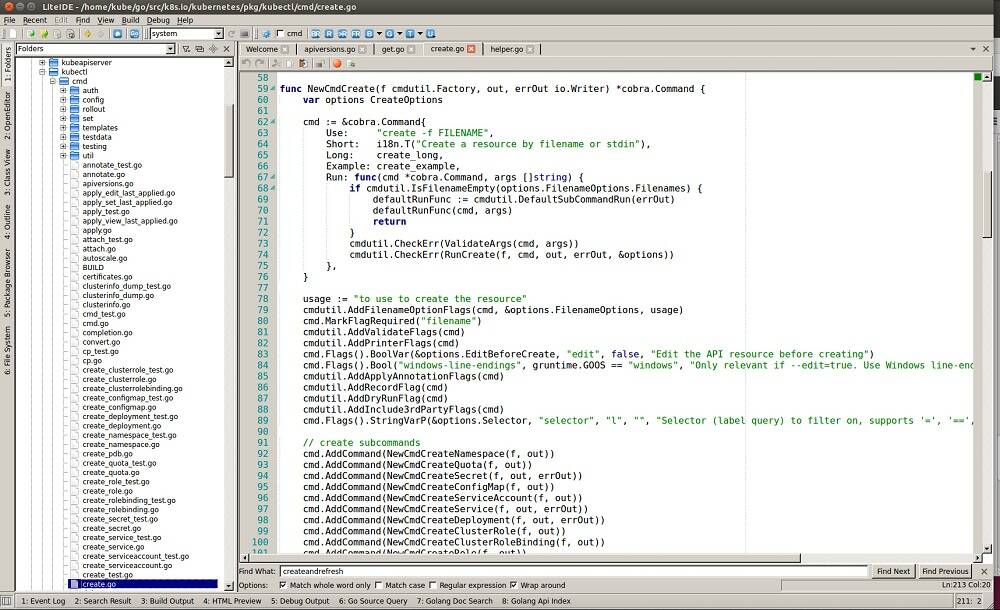 Kubernetes commands are implemented using the Cobra command framework. Cobra provides a lot of great features for building command line interfaces and a basic overview of Cobra’s capabilities can be found here. As shown in the Figure, one of the nice features of how Kubernetes utilizes Cobra is that it is very easy to locate which file implements each command line option. Furthermore, the Cobra structure puts the command usage message and command descriptions adjacent to the code that runs the command. This is shown in the figure and the actual lines of code. What’s great about this structure is that you can go through and look at the descriptions for all the Kubernetes kubectl commands and then quickly jump to the code that implements the commands. As shown in lines 62-76 in the figure, the strings Use, Short, Long, and Example all hold information describing the command and Run points to a function that actually runs the command. 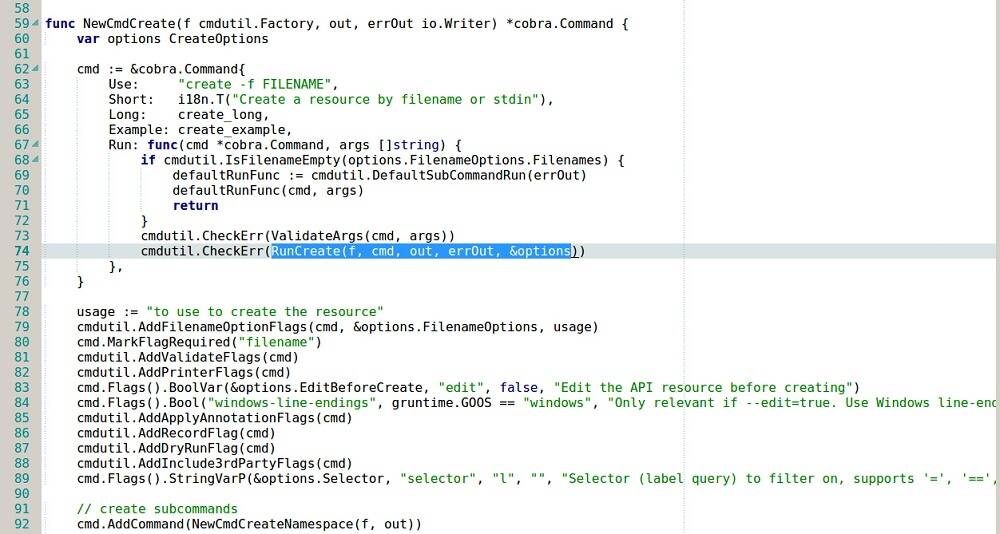 The RunCreate function invoked on line 74 in the above figure is where the bulk of the kubectl create command is implemented. The implementation of this function can be found in the same create.go file. The figure below shows the RunCreate function. On line 132 I added a fmt.Println just to confirm this code was being called when I thought it would be called. In the Compiling and running Kubernetes section below I show how you can speed up recompiling the Kubernetes code base when adding debugging statements solely to the kubectl source code. 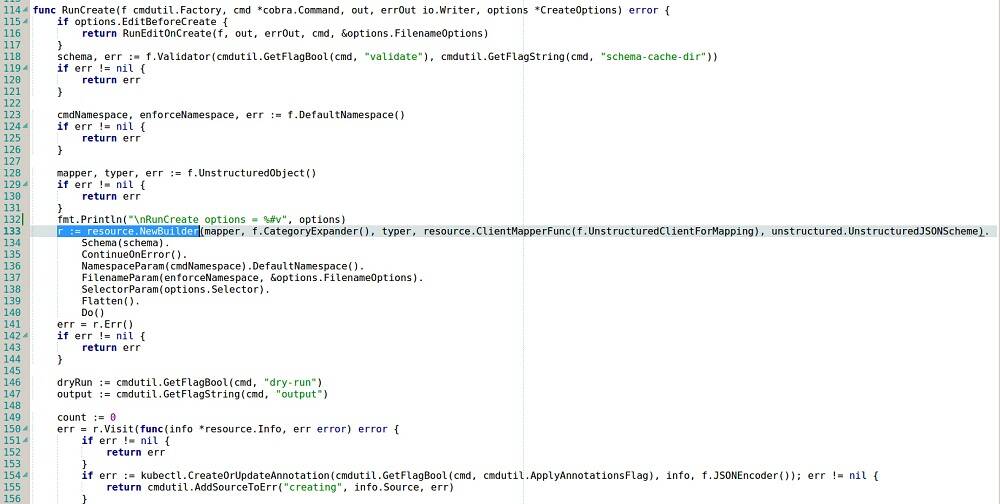 Builders and visitors abound in Kubernetes

The resource.NewBuilder function code shown on lines 133-140 is particularly intimidating to someone new to Go and Kubernetes. It’s worth taking some time to explain this section of code in more detail. At a high level, what this code does is take the arguments and parameters from the command line and converts them into a list of resources. It’s also responsible for creating a visitor construct that can be used to iterate across all the resources. The code is complex because it uses a variant of the builder pattern where individual functions are each doing a separate portion of the data initialization. The functions Schema, ContinueOnError, NamespaceParam, DefaultNamespace, FilenameParam, SelectorParam, and Flatten all take in a pointer to a Builder struct, perform some form of modification on the Builder struct, and then return the pointer to the Builder struct for the next method in the chain to use when it performs its modifications. All of these methods can be found in the builder.go file but I have included a few below so you can see how they work. 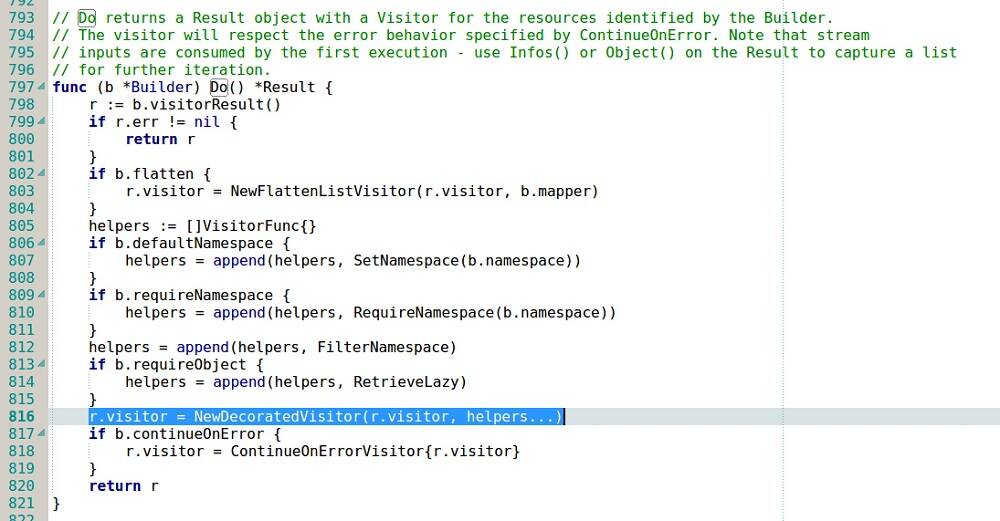 As shown above on line 816, a new DecoratedVisitor is created and stored as part of the Result object that is returned by the Builder Do function. The DecoratedVisitor has a Visit function that will call the Visitor function that is passed into it. The implementation of this can be found at github.com/kubernetes/kubernetes/blob/6b52d8f1383d3a4a769b403a04f812c99ed98815/pkg/kubectl/resource/visitor.go#L306 and is shown below. 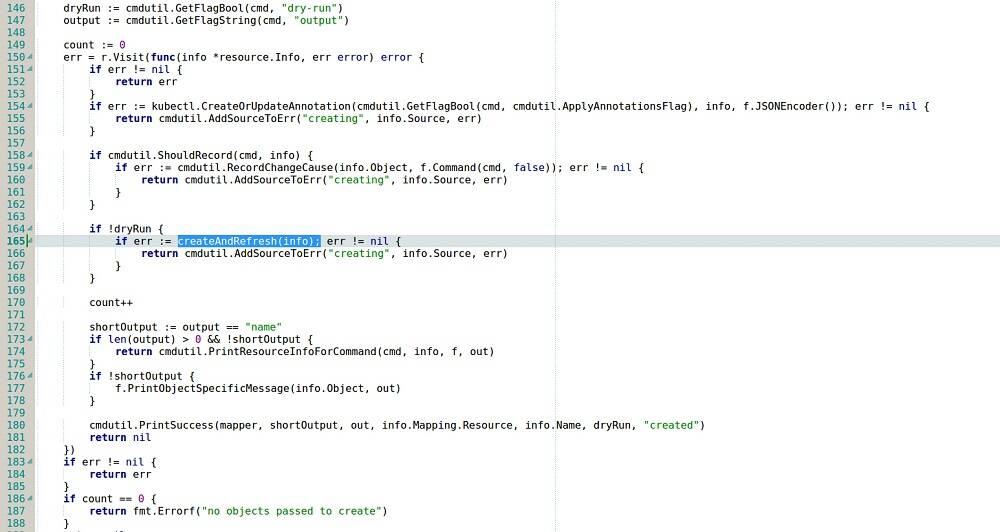 The createAndRefresh function invokes the Resource NewHelper function found in helper.go and this function returns a new Helper object.

Here is the code that returns a new Helper object. It is actually pretty straightforward.

Now that we have reviewed the code its time to learn how to compile and run the code. In many of the code samples provided above you will see fmt.Println() calls in the code. All of those are debugging statements that I added to the code and you can add them to your copy of the source code as well. To compile the code we are going to use a special option that informs the Kubernetes build process to only compile the kubectl portion of the code. This will speed up the Kubernetes compilation process dramatically. The make command for doing the optimize compile is:

Once we have recompiled the kubectl portion of the code with our debugging print statements added, we can then then start up our Kubernetes development environment using the following command:

The following figure illustrates running this command from the command line.

In another terminal window we can go ahead and run the kubectl commnand and watch it run with our fmt.Printlns included. We do this with the following command:

The figure below shows what the output looks like with our debugging print statements included: 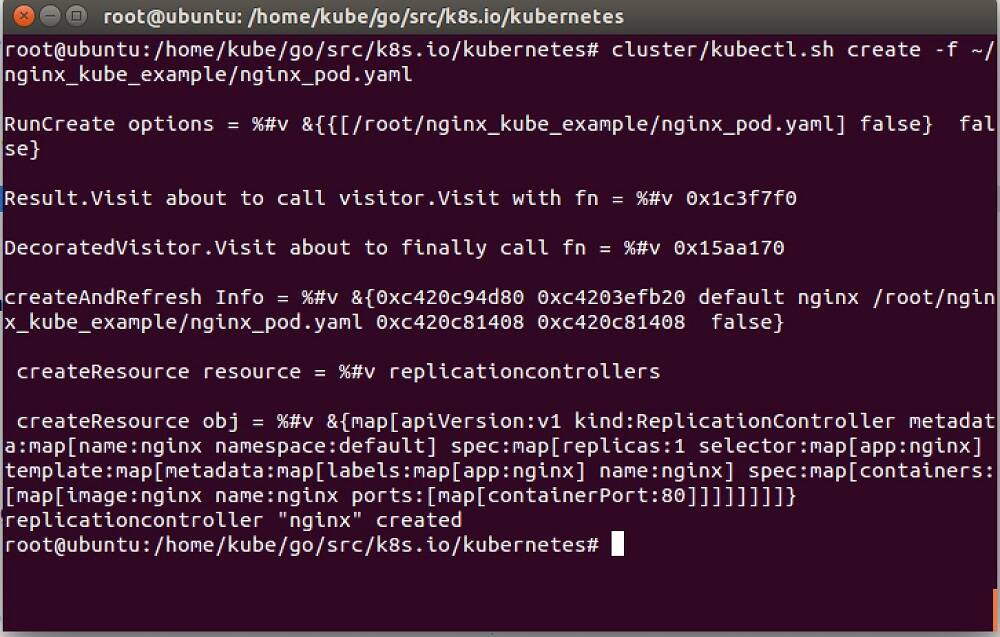 I know what you are thinking. Brad, you are new to Kube and Go and you quickly learned all this. You must be a genius! Well, sadly I have a list of Twitter followers who would be more than happy to jump in with solid concrete evidence that would easily refute that statement. But through the help of others I have identified several tools and techniques that can really help accelerate your ability to learn the Kubernetes source code. In this section I describe my favorite techniques: use of the Chrome Sourcegraph plugin, properly formatted print statements, the use of a Go panic to get desperately needed stack traces, and GitHub blame to travel back in time.

Morgan Bauer introduced me to one of the coolest tools I have seen for learning Kubernetes code. The Chrome Sourcegraph plugin provides several advanced IDE features that make it dramatically easier to understand Kubernetes Go code when browsing GitHub repositories. Here is an example of how it can help. When I first started looking at Kubernetes code I found the following code snippet absolutely depressing to parse through and understand. It had a ton of functions and it was just overwhelming.

When looking at this same piece of code in a Chrome browser with the Sourcegraph extension installed you can hover the mouse over each function and quickly get a description of the function, what is passed into the function and what it returns. This is a huge time saver as you can avoid having to grep the code base to understand where a function is defined and what it does. An example of this is shown in the figure below. 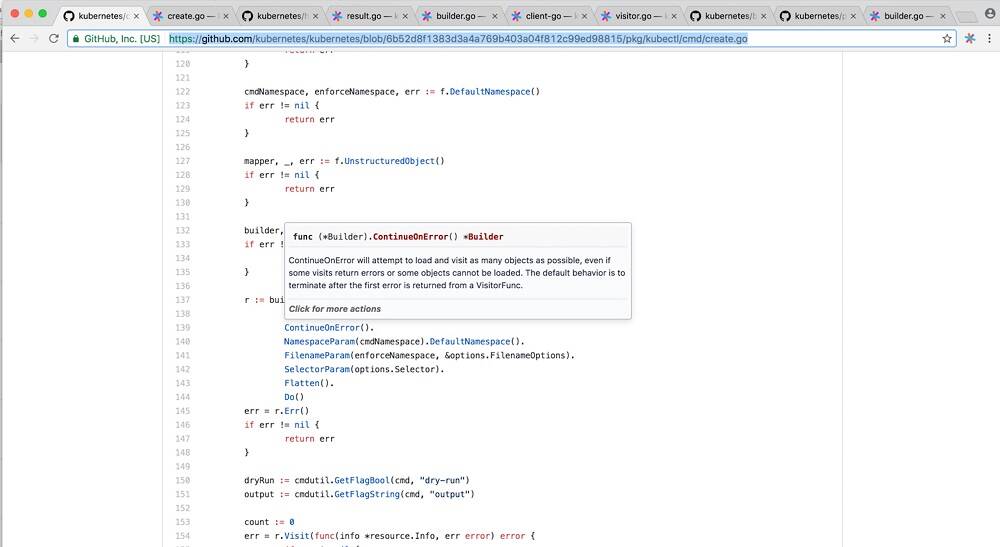 The Chrome Sourcegraph extension also has an advanced view that provides the ability to peek into the function that is being invoked. This extremely useful capability is shown here. 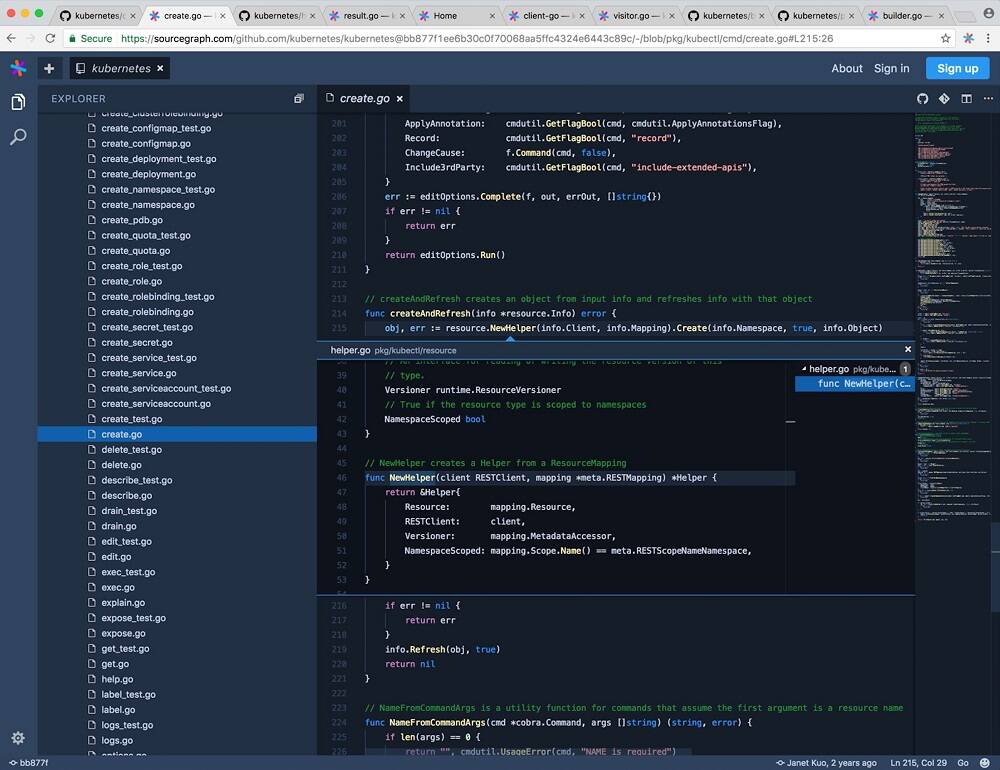 One issue I noticed with Chrome Sourcegraph is that sometimes it hangs and fails to pop up the code details. My experience has been that this is easily fixed by simply hitting the refresh button on the browser.

Adding print statements as I have shown throughout this article is a huge help to validating that the code is executing in fashion that matches how you are interpreting it. The %#v formatting option shown below typically provides the best debugging information. Don’t forget that you may have to add "fmt"to your list of imports if it is not already included in the module.

When in doubt, PANIC

I was having a very difficult time determining how the createAndRefresh function in Create.go was invoked. Finally, I decided to throw in a panic into the code to force a stack trace to be generated and printed to the screen. The code below shows how I added a panic to the function. This was a huge help as it helped me to determine which type of Visitor was actually being used to invoke the createAndRefresh function.

Visit the past with GitHub blame

Sometimes you look at some lines of source code and you think to yourself, what was the person thinking when they committed those lines of code. Thankfully, the GitHub browser interface has a blame option available as a button on the user interface. The figure below shows the location of the blame button.

When you push the blame button, you are given a view of the code that has the commits responsible for each line of code in the source file. This allows you to go back in time and look at the commit that added a particular line of code and determine what the developer was trying to accomplish when that line of code was added. The figure below illustrates the use of the blame option and on the left hand side all the commits are listed. 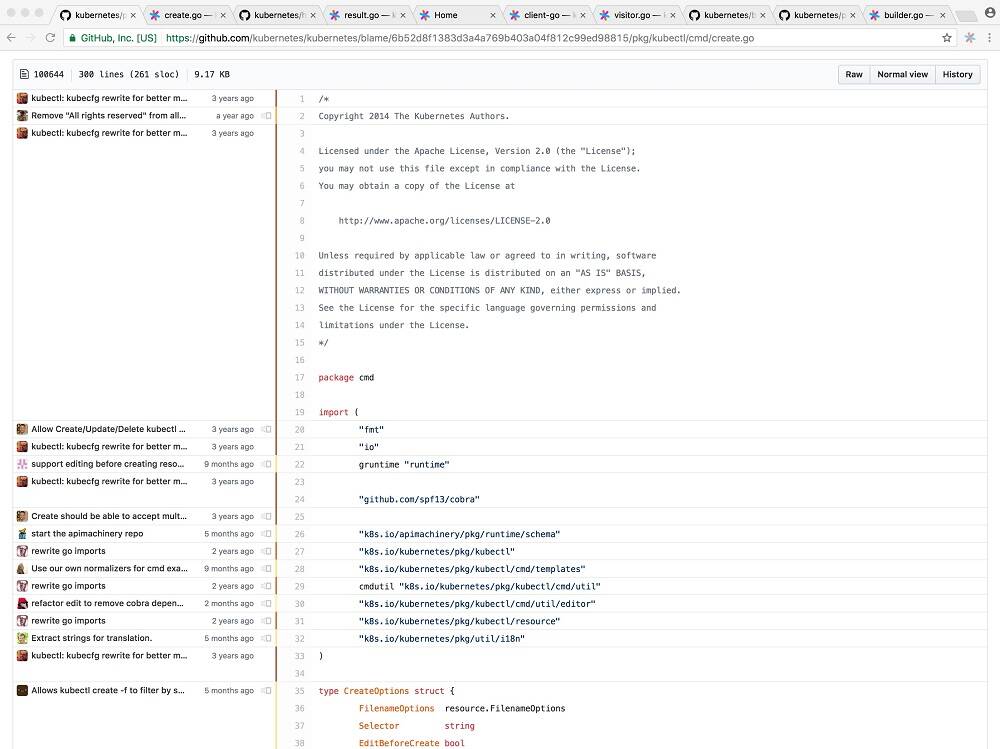 In this article, we have examined several key portions of the Kubernetes code base responsible for running a simple kubectl command and the flow through the code that actually sends a REST call to the API Server. We have also provided examples on how to compile and run the command from a Kubernetes development environment. We concluded with a section that describes several useful tools and techniques for learning the Kubernetes source code.