If this tutorial looks a bit daunting, perhaps you’d like to start with another workshop, “Configuring mesh networking for the IoT Edge.”

I hope that even if you cannot follow along in the steps in this workshop exactly that you can use them as a model for building your own IoT edge solution using similar hardware and software.

These steps are the main steps for this tutorial:

The journey follows this series of steps. 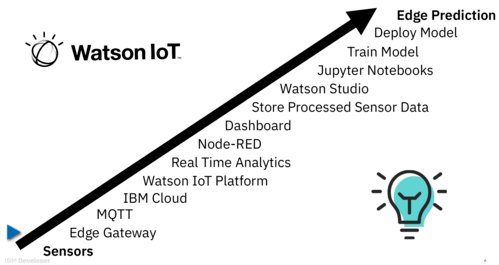 The edge device in this workshop is the STM32MP1 Discovery Kit with the IKS01A2 sensor expansion board attached.

You can complete this tutorial using an IBM Cloud account:

Step 1. Set up the edge device

Before you can start creating your Node-RED apps, you need to create an IoT starter application running in IBM Cloud, open Watson IoT Platform to confirm that you can send/receive data from your edge device, and register the edge device in Watson IoT Platform. Next, you’ll configure Node-RED, install additional nodes, and import a pre-built flow, and then you’ll create your first Node-RED app that outputs the sensor data.

With this tutorial, I tried to show how you can go from sensors to insights, from the edge to the cloud. If you’d like to try your hand at other edge computing solutions, check out the Edge Computing and IBM Edge Application Manager hubs.