OpenStack is an increasingly popular open source solution for deploying Infrastructure as a Service (IaaS) clouds. OpenStack ships with a dashboard web app that works well for performing manual tasks, such as launching a single virtual machine (VM) instance, but if you want to automate your cloud-based tasks, you’ll need to write scripts that can drive OpenStack.

The term service in OpenStack is overloaded. It is used to refer to:

Many users write either automation scripts directly against the OpenStack Representational State Transfer (REST) application programming interface (API) or shell scripts that invoke the command-line tools (for example, keystone or nova). But a better way exists to write OpenStack automation scripts in Python. All of the OpenStack services expose native Python APIs that expose the same feature set as the command-line tools. Unfortunately, not much documentation is available to describe how to use these APIs.

If you’re a Python programmer, the Python APIs are much simpler to work with than command-line tools or the REST API. In this article, I demonstrate how you can use the native OpenStack Python APIs to automate common user and administrative tasks.

The term OpenStack doesn’t refer to a single application. Rather, it’s a collection of services that work in concert to implement an IaaS cloud. (See the sidebar Services in OpenStack for what service means here.) Each OpenStack service has an official name and a code name, as shown in Table 1, and every OpenStack service exposes its own Python API.

The Python bindings are bundled with the command-line tools for each service. In fact, each command-line tool is implemented using the corresponding Python API. You can install each tool from the Python Package Index. The pip package names are:

For example, to install the keystone client, run the following command:

You can install these packages into a Python virtualenv or into your system-wide Python packages, if you have root privileges on your local machine.

All of the OpenStack APIs are versioned, and the Python bindings support multiple API versions to maintain backwards compatibility. As a result, it’s safe to download the latest version of these packages, because they will work with all older versions of OpenStack services.

In this article, I focus on Python API examples from the following services:

Setting up a test environment

A client makes requests against the Identity (keystone) API by instantiating the appropriate keystone client Python object and calling its methods. Because the APIs are versioned, the Python clients are always associated with a specific version of the API.

Listing 1 shows an example of using version 2.0 of the keystone client to add the Image Service to the service catalog.

You must supply credentials when instantiating a keystoneclient.v2_0.client.Client object. A keystone endpoint accepts two types of credentials: a token or a user name and password. If you are an administrator, you can use the admin token, which is a special token that has administrator privileges and never expires. You define this token with the admin_token configuration option in the /etc/keystone/keystone.conf file on the machine that runs the keystone service (see Listing 2).

Listing 2. Authenticating with the auth token

Using the admin token is generally frowned upon for security reasons. Instead, the OpenStack Identity developers recommend that you always use a user name and password for authentication after you have created a user who has admin privileges (see Listing 3).

To simplify authentication, I recommend that you create an openrc file that exports the credentials to environment variables. Doing so allows you to avoid hard-coding login information into your scripts. Listing 4 shows an example openrc file.

When the openrc file has been sourced, Python scripts can retrieve the credentials from the environment. Let’s create a Python file called credentials.py, as shown in Listing 5, that extracts the login information from the environment. Note that keystone and nova use slightly different variable names in their client initializer methods, so I define separate functions for each.

If the client initializer returns without throwing an exception, it has successfully authenticated against the endpoint. You can access the keystone token that you were just issued through the auth_token attribute of the returned object, as shown in Listing 6. When authenticating against the glance API, you will need to explicitly pass a keystone authentication token as an argument to the initializer, as discussed later.

Listing 6. Successfully authenticating against a keystone endpoint in an interactive Python session

Note: The Grizzly release of OpenStack Identity uses Public Key Infrastructure tokens by default, which are much longer than the universally unique identifier tokens (for example, 7d9fde355f09458f8e97986a5a652bfe) used in previous releases of OpenStack.

Typically, one of the first tasks you perform when deploying OpenStack is to create a keystone tenant, and then a keystone user with administrative privileges. Listing 7 shows an example of how to automate this process by using the Python API. The script performs the following tasks:

This is a good scenario for using the admin token, because the Identity Service does not yet contain any users with administrative privileges.

Typically, the next task in deploying the Identity Service in an OpenStack cloud is populating keystone with the services in the cloud and the endpoints. Listing 8 shows an example of how to add a service and an endpoint for the Identity Service using the Client.services.create and Client.endpoints.create methods.

Listing 8. Creating a service and endpoint

One of keystone‘s primary functions is to serve as a service catalog. Clients can use keystone to look up the endpoint URL of an OpenStack service. The API exposes this functionality through the keystoneclient.v2_0.client.Client.service_catalog.url_for method. This method allows you to look up a service endpoint by its type (for example, image, volume, compute, network) and its endpoint type (publicURL, internalURL, adminURL).

Listing 9 demonstrates how to use the url_for method to retrieve the endpoint of the OpenStack Image (glance) Service.

Listing 9. Querying for the glance endpoint in an interactive Python session

Version 1.1 and version 2 of the nova API are identical. You can pass “2” instead of “1.1” as the first argument of the novaclient.client.Client initializer, but no novaclient.v2 module exists — only a novaclient.v1_1 module.

Authenticating against the nova-api endpoint

You make requests against the nova-api endpoint by instantiating a novaclient.v1_1.client.Client object and making calls against it. You can retrieve a client that communicates with version 1.1 of the API in two ways. Listing 10 demonstrates how to retrieve the appropriate client by passing the version string as an arguments.

Listing 11 demonstrates how to retrieve the appropriate client by importing the version 1.1 module explicitly.

Use the Client.servers.list method to list the current VM instances, as shown in Listing 12.

Listing 12. Retrieve a list of VM instances in an interactive Python session

Retrieving an instance by name and shutting it down

If you don’t know the ID of an instance but you know its name, you can use the Server.find method. Listing 13 shows how to find an instance by name and terminate it using the Server.delete method.

Booting an instance and checking status

To start up a new instance, you use the Client.servers.create method, as shown in Listing 14. Note that you must pass an image object and flavor object, not the names of the image and flavor. The example also uses the Client.keypairs.create method to upload the Secure Shell (SSH) public key at ~/.ssh/id_rsa.pub and names the key pair mykey, assuming that key pair does not yet exist. Finally, it uses the Client.servers.get method to retrieve the current state of the instance, which it uses to poll for status.

Listing 16. Allowing port 22 and ICMP in the default security group

The Server.get_console_output method retrieves the text sent to the console when the VM boots up. You can parse the console output to work around a common issue with changing host keys.

One of the drawbacks of an IaaS cloud such as OpenStack is that it doesn’t interoperate well with SSH host key checking. If you are logging in to an instance at, say, 10.40.1.150, and that IP address had been previously used by another instance that you had logged in to in the past, you’ll get an error that looks like Listing 17.

If your VM image has the cloud-init package installed, then it will output the host key to the console, as shown in Listing 18.

Listing 19 shows a script that uses the Server.get_console_output API method to extract the SSH host key from the console and update the ~/.ssh/known_hosts file so you don’t get that SSH warning when you use SSH to access the floating IP instance the first time.

Listing 19. Extracting the SSH host key from the console

The OpenStack Image Service (glance) is responsible for managing a catalog of VM images that the Compute Service uses.

Authenticating against the glance endpoint

The OpenStack Image (glance) Python API has some minor differences to the Compute API when doing the initial authentication. The glance API depends on information that it must obtain from the keystone API:

Like the nova API, with the glance API, you can pass the API version as an argument or import the module directly. Listing 20 shows an example of how to authenticate against a glance endpoint with version 2 of the API.

Listing 20. Authenticating with the glance API

Listing 21 shows an example in which the relevant glance module is imported directly.

Use the Client.images.list method to list the current images, as shown in Listing 22. Note that this method returns a generator, where the list methods in the nova API return list objects.

Uploading an image to glance

Listing 23 shows an example of how to use the glance API to upload a file. You need to use version 1 of the API to create an image, because the Python API bindings have not implemented the create method for version 2.

Listing 23. Uploading an image to glance

This article provides only a brief overview of the functionality the OpenStack Python APIs expose. Here are a few ways you can learn more about how the APIs work. 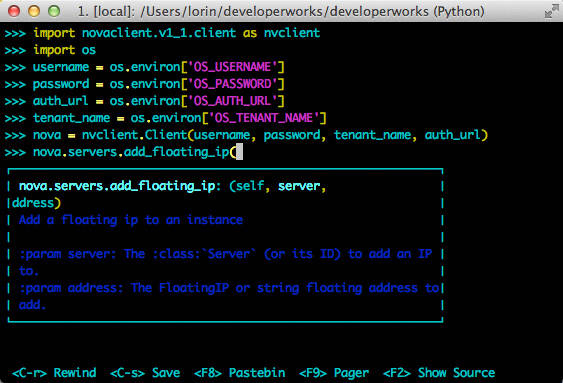 One of Python’s strengths is its readability, and there’s no better way to learn the API than to read the source code. The packages are all hosted on github in the openstack group. For example, to get a copy of the nova API source code, run the following command:

Because the command-line clients are implemented using the API, each package conveniently ships with an example application.

For the novaclient API, the files of most interest are those in the novaclient/v11 directory, which contains the Python classes that form the API. The command-line commands on the shell are implemented as `do*methods in novaclient/v1_1/shell.py. For example,nova flavor-listis implemented as thedo_flavor_listmethod, which ultimately calls theClient.flavors.list` API method.

Examine other apps that use the Python APIs

The OpenStack Client is an effort to unify the functionality across the existing clients into a single command-line interface. It uses the Python APIs from all of the other projects.

The Heat project is an orchestration layer designed to work with OpenStack and uses the APIs. In particular, look at the heat/engine/clients.py file.

Ansible is a Python-based configuration management tool that has several OpenStack modules that use the Python APIs. In particular, look at the library/cloud directory, which contains the Ansible OpenStack modules.

Once you learn how the Python APIs work, it’s difficult to imagine going back to using the REST API or the command-line tools to build your OpenStack automation scripts.

App Transformers: What about my modernized application's configuration and tuning?