Today’s IT systems are generating, collecting, and processing more data than ever before. And, they are dealing with highly complex processes (that are being automated) and integrations between systems and devices that cut across typical organizational boundaries. At the same time, IT systems are expected to be developed more quickly and cheaply, while also being highly available, scalable, and resilient.

To achieve these aims, developers are adopting architectural styles and programming paradigms, such as micoservices, event-driven architecture, DevOps, and more. New tools and frameworks are being built to help developers deliver on these expectations.

Event Driven Architecture (EDA) has existed for a long time. Cloud, microservices, and serverless programming paradigms and sophisticated development frameworks are increasing the applicability of EDA in solving mission critical business problems in real time. Technologies and Platforms such as Kafka, IBM Cloud Pak for Integration, and Lightbend, and development frameworks such as Spring Cloud Stream, Quarkus, and Camel all provide first class support to EDA development. EDA is also extended for streaming data processing which is a requirement for developing real-time artificial intelligence or machine learning solutions. The article “Advantages of event-driven architecture” defines EDA and explains why developers should use it.

Microservices Architecture is being widely adopted and used in transformation projects that involve breaking monolithic applications into self-contained, independently deployed services that are identified using domain-driven design. A good introduction of Microservices Architecture and its characteristics can be found in Martin Fowler & James Lewis article. Microservices can expose APIs and have interfaces for producing and consuming events to seamlessly integrate with EDA. Many of its characteristics make it a good candidate for combining it with EDA. The article “Challenges and benefits of the microservice architectural style” discusses the challenges that developers face when implementing microservices.

The following table shows how these two architectural styles compliment each other:

By combining these two architectural styles, developers can build distributed, highly scalable, available, fault-tolerant, and extensible systems. These systems can consume, process, aggregate, or correlate extremely large amounts of events or information in real-time. Developers can easily extend and enhance these systems by using industry-standard open-source frameworks and cloud platforms.

By combining EDA and Microservices architecture styles, developers can easily achieve non-functional qualities such as performance, scalability, availability, resiliency, and ease of development. However, these two architectural styles also introduce some major concerns.

Some of these concerns include:

The following figure is an architectural diagram of an EDA-Microservices-based enterprise system. Some microservices components and types are shown separately for better clarity of the architecture. 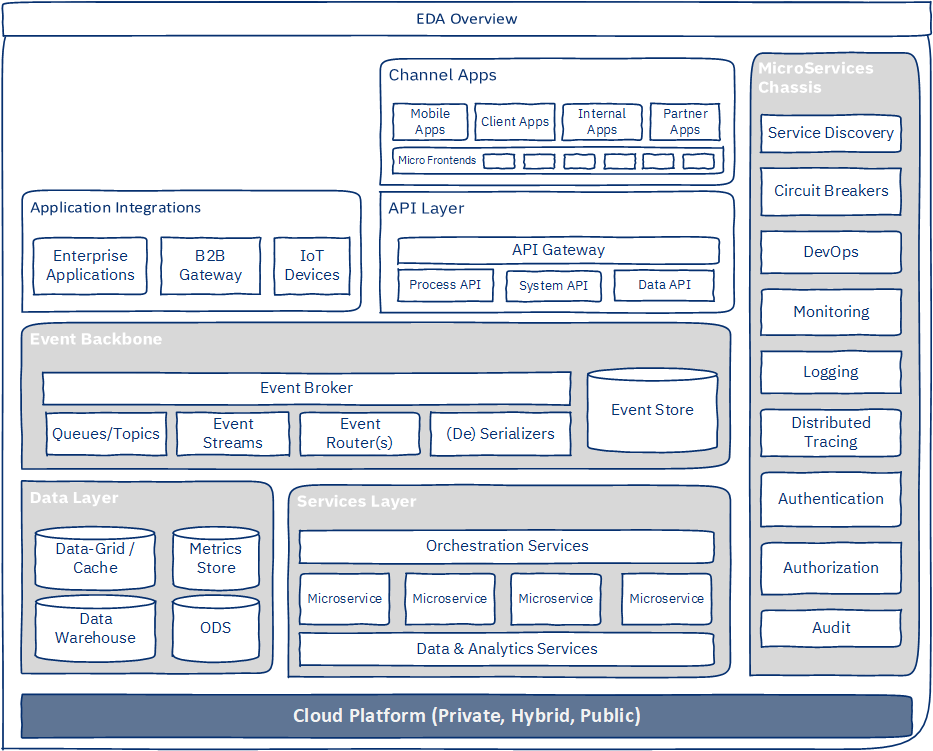 The EDA and Microservices specific components in this blueprint are:

Patterns need to be chosen based on requirements and architectural qualities that are desired from the system.

When choosing your technology stack, consider these characteristics:

Following table lists down the popular choices for different components:

The following figure depicts a blueprint of a processing topology.

And this following figure depicts a simplified order processing toplogy for online shopping. The router has the ability to dynamically route events to multiple topics. Also note that event processors will also have ‘event filters’ to control consumption and production of events based on context.

In an EDA-microservices architecture, there are numerous components to deploy. A deployment topology should be chosen such that architectural requirements related to scalability, availability, resiliency, security, and cost are met. However, there are tradeoffs to be made between redundancy, performance, and cost. Deployment to cloud makes the architecture even more performant, resilient, and cost efficient. Capabilities that are provided by cloud deployments (such as high availability setup in Kubernetes) should be exploited.

Consider these key principles to consider for your deployment topology:

Additionally, it is important to have support for automated deployments, automated failover, rolling upgrades or blue-green deployments, and the externalization of the configuration to make the environment of the deployment artifacts independent.

Exceptions can be of two types: business exceptions and system exceptions. Business exceptions are raised when validations or a business condition fails. System exceptions are a broad category of failures due to unavailability of components (database, event broker, or other microservices) or due to resource issues (such as OutOfMemory errors), network or transport related issues (such as payload serialization or de-serialization errors), or unexpected code failure (such as NullPointerException or ClassCastException).

There is significant variation in how you handle the different types of exceptions. Some of the exception handling mechanisms are listed below:

Developers must consider these aspects of security in EDA-microservices architectures:

Observability includes monitoring, logging, tracing, and alerting. Each component of the system should be observable to avoid failures and also to quickly recover from failures.

Most of the EDA products and development frameworks provide support for observability by publishing metrics that can be exported into industry-standard observability tools such as Prometheus and Grafana, ELK, StatsD and Graphite, Splunk, or AppDynamics. For example, Apache Kafka provides detailed metrics that can be exported and integrated with most of these tools. Also, cloud platforms that offer managed services for an event backbone (IBM Event Streams) provide first class support for observability. Microservices development frameworks such as Spring or Camel provide good support for code instrumentation for monitoring.

From an EDA perspective, instrumenting the code of producers and consumers for publishing metrics, publishing event broker metrics, and correlating these through a metrics dashboard is essential because the number of distributed components in EDA is high. Some of the key metrics from an EDA perspective are rate of incoming and outgoing messages, lag in consumption, network latency, queue and topic sizes, and so on.

To provide adequate fault tolerance, the architecture needs to provide redundancy, exception handling, and elastic scaling (scaling up when thresholds are breached and scaling down when load returns to normal). With EDA and cloud, most of these can be easily achieved. Event backbones cater to fault-tolerance by supporting the clustering and replication of queues and topics. Producers and consumers can have multiple instances deployed. When deployed as containers on a Kubernetes platform, elastic scaling can be easily achieved through auto-scaling (using horizontal pod auto-scalers) but exception handling has to be designed for producers and consumers.

Although EDA-based systems provide for resiliency through staged architecture, quick failure response and recovery is critical to avoid delays and consistency issues. To achieve this quick recovery, you need:

Developers can combine Event Driven Architecture and Microservices Architecture styles to develop distributed, highly available, fault-tolerant, and high-throughput systems. These systems can process very large amounts of information and can have extreme scalability. However, while building such systems, developers must consider many architectural concerns and complexities and make many key architectural decisions. In this article, the key architectural decisions and what factors need to be considered for making those decisions have been discussed. By following the guidance in this article, a robust EDA-Mircoservices architecture can be defined to achieve the desired objectives.

Move from monolithic apps to microservices

Challenges and benefits of the microservice architectural style, Part 1