How to easily implement and configure on-premises Kubernetes platforms

For Red Hat OpenShift, it’s important to know that there are several different offerings available:

A more detailed comparison of these offerings can be found on the OpenShift website. Since Cloud Pak System is an on-premises appliance, it only provides support for the RHOCP offering. In this tutorial, you’ll learn how to deploy RHOCP on a Cloud Pak System. We wrote the steps by assuming that the Cloud Pak System does not have direct access to the internet and by using Cloud Pak System 2.3.0.1 firmware.

There are many factors that influence how quickly this tutorial can be completed. The majority of time is typically spent in the Prerequisites section. Once this is done, working through the remaining steps should take one to two hours.

Before you can deploy an OpenShift cluster on Cloud Pak System, a number of prerequisites need to be in place. IBM Knowledge Center provides a good starting point for those prerequisites:

The first three prerequisites here are fairly obvious, but we will take you through the details of what is exactly needed for RHSS in the Prepare Red Hat Satellite Server section. Since we are making the assumption that you are working on an environment without direct internet access, the Create a Private Docker Registry section will show how to create your own private Docker registry to support the offline installation of OpenShift.

Most companies choose to integrate their (Intel-based) Cloud Pak System and PureApplication Platform client virtual machines (VMs) with RHSS 6. When deploying VMs using RHEL 6 or 7, it provides a straightforward process for performing RHEL OS maintenance. (For example, installing security patches on a regular basis.) Of course, it also greatly simplifies the installation of new RPM packages and their dependencies. (For example, you can simply perform a yum install <package-name> from a shell.) You can either deploy RHSS 6 on Cloud Pak System itself, or integrate with an existing RHSS that is already in place. IBM recommends using RHSS 6.4 or higher with Cloud Pak System and IBM Support details how to set it up.

Assuming you have RHSS 6.4 or higher in place, some additional steps are required to deploy RHOCP on Cloud Pak System:

By enabling these repositories, RHSS will download the RPMs from them. 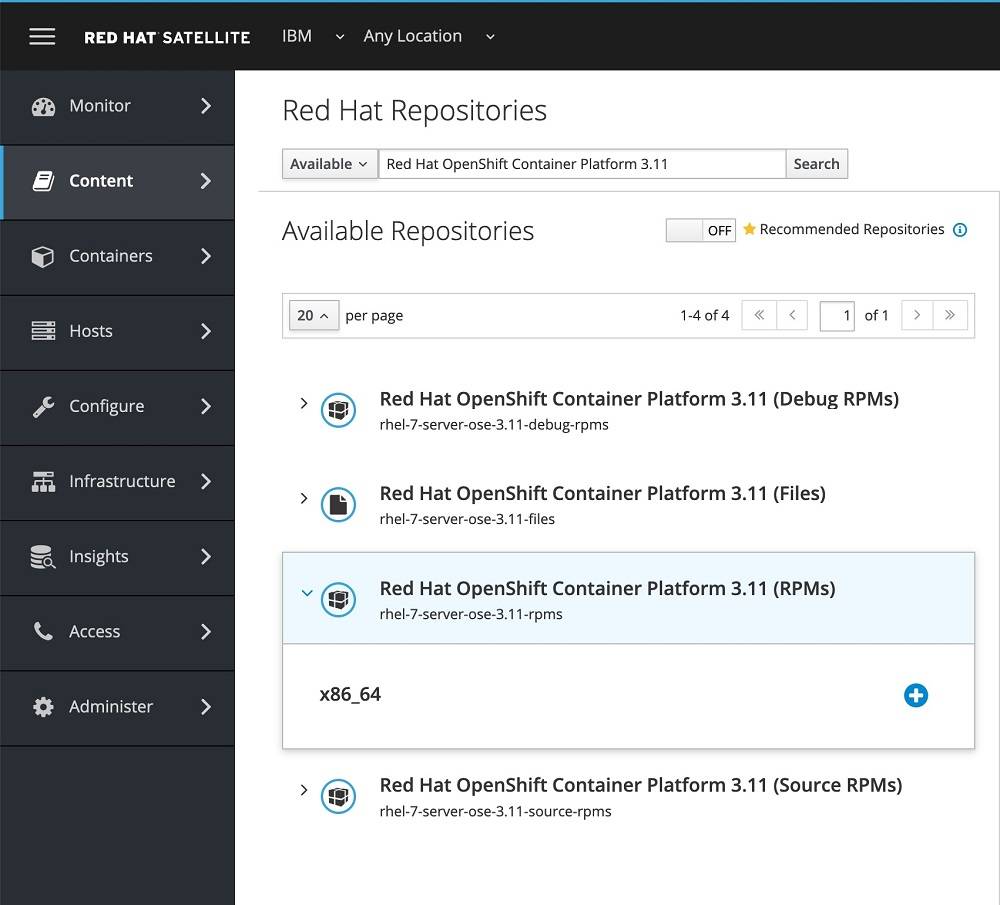 Step 3. Go to Content > Sync Status, as shown in Figure 9, to confirm that the Result column shows a status of Syncing Complete for each repository or that they are downloaded. You may need to trigger the synchronization process or create a schedule to automatically perform the synchronization at regular intervals. 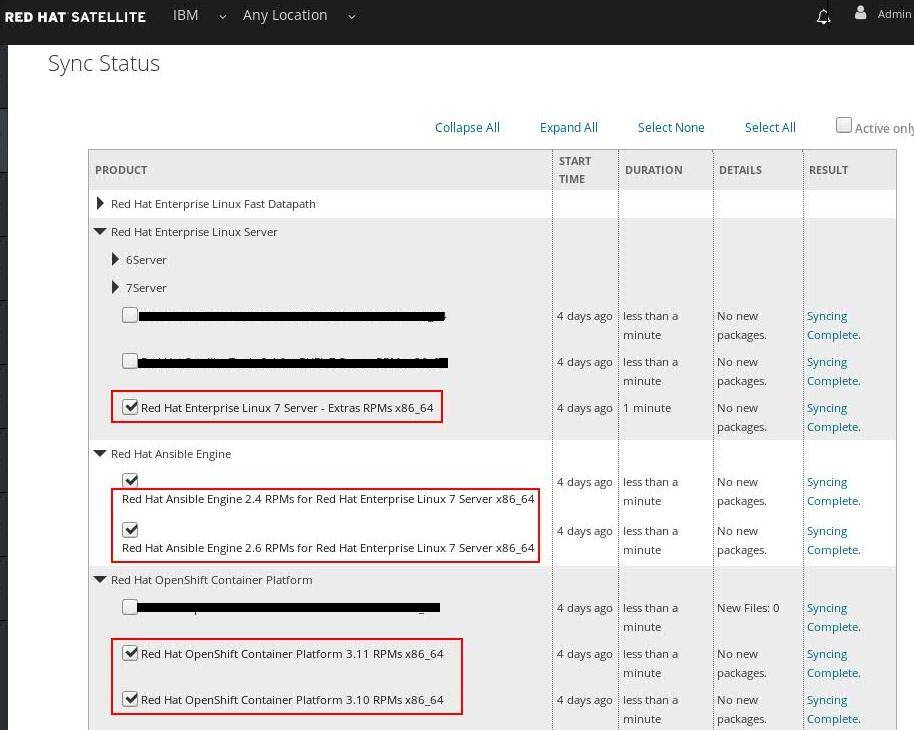 Step 4. Go to Content > Content Views and find default_contentview. This view is associated with any VM that gets deployed and registered with RHSS. For example, it determines what RPMs they can “see.” This view needs to be updated to include the newly added repositories.

Select the Yum Content tab. Under the Repository Selection section, select Add. You should see all Red Hat repositories you enabled in Step 2. Select all of the repositories and click Add Repositories, as shown in Figure 10. When done, click Publish New Version. 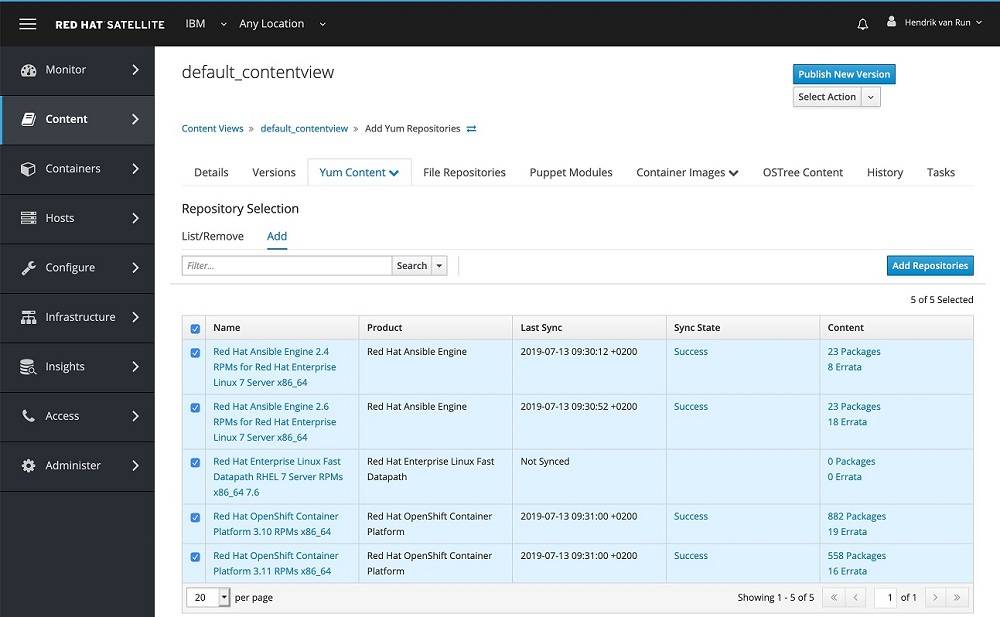 Step 5. Before you proceed, make sure that the default_contentview page you just updated is associated with the activation key you uses on Cloud Pak System. (Note: Consider using a separate activation key and content view for RHOCP. This allows for your RHOCP subscription to only be associated with a subset of the VMs deployed on Cloud Pak System.)

Confirm the activation key is associated with your content view by navigating to Content > Activation Keys, as shown in Figure 11.

Figure 11: The osh activation key is associated with default_contentview in RHSS. 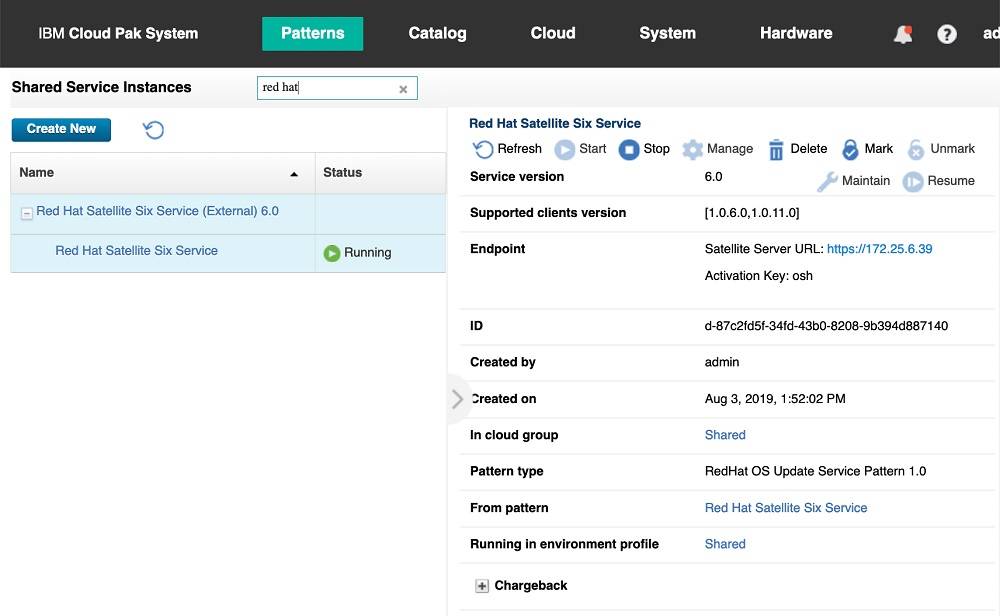 You have completed the preparation of RHSS for deployment of RHOCP.

Step 1. While logged on to IBM Cloud Pak System, go to Patterns > Virtual System Patterns and look for the pattern called Docker Private Registry, as shown in Figure 13. By default, it will deploy a VM with RHEL 7, Docker version 18.06.1-ce, and the image registry installed along with 50 GB of local storage under /var/docker-registrystorage. This can all be modified, but that is beyond the scope of this tutorial.

Step 2. Once deployed, log on to VM to confirm the version of RHEL and Docker.

Also, validate that you can log on to the Docker Private Registry from the command line.

We assume that your Docker Private Registry does not have internet access. So you will need a VM/server to be able to populate your Private Docker Registry with the with RHOCP Docker images. This VM/server should meet the following requirements:

Figure 14 illustrates how this VM/server will be used to pull the Docker images from registry.redhat.io, tag them, and push them to your Docker Private Registry registry.my.domain.

The commands below show how to push the RHOCP Docker image from registry.redhat.io/openshift3/apb-base:v3.11.104, tag it, and then push it to your Private Docker Registry registry.my.domain.

Once you have completed these steps for the RHOCP Docker images, you can validate if you can pull one of the images as shown below. When this is working fine, you can proceed to deployment of the RHOCP patterns.

Before we deploy a new RHOCP cluster, let’s briefly discuss the terminology used to refer to the different kind of nodes.

This pattern deploys a RHOCP topology, as shown in Figure 16. Note that this pattern does not deploy a Bastion node, as the installation is done from the only master node. 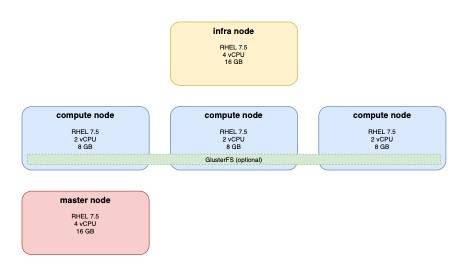 This pattern deploys a RHOCP topology, as shown in Figure 17. Note that unlike the other pattern, this uses a Bastion node to perform the installation on the other nodes. Once installation has been completed, this VM is no longer actively used.

As indicated in Figure 17, GlusterFS storage is optional. As you will see further down in this tutorial, you can select GlusterFS or Custom at deployment time. If you select Custom, GlusterFS does not get configured and OpenShift will be installed without a persistent storage provider. You are then free to install and configure a storage provider of your own choice. For more details, refer to OpenShift documentation.

When opting for GlusterFS, note that it will be deployed inside containers on the OpenShift Compute nodes. So it shares the same nodes with any containerized applications you may deploy. Also, note that GlusterFS requires a minimum of three nodes due to the need for quorum to ensure consistency. Should you add additional Compute nodes afterwards, GlusterFS will stick to the original three Compute nodes originally deployed.

Step 3. Accept the default for the rest of the attributes. Make sure you are happy with the values on the panel on the left-hand side for the Name, Environment Profile, Cloud Group, IP Group, and Priority fields. Click Quick Deploy to start the deployment, as shown in Figure 19. 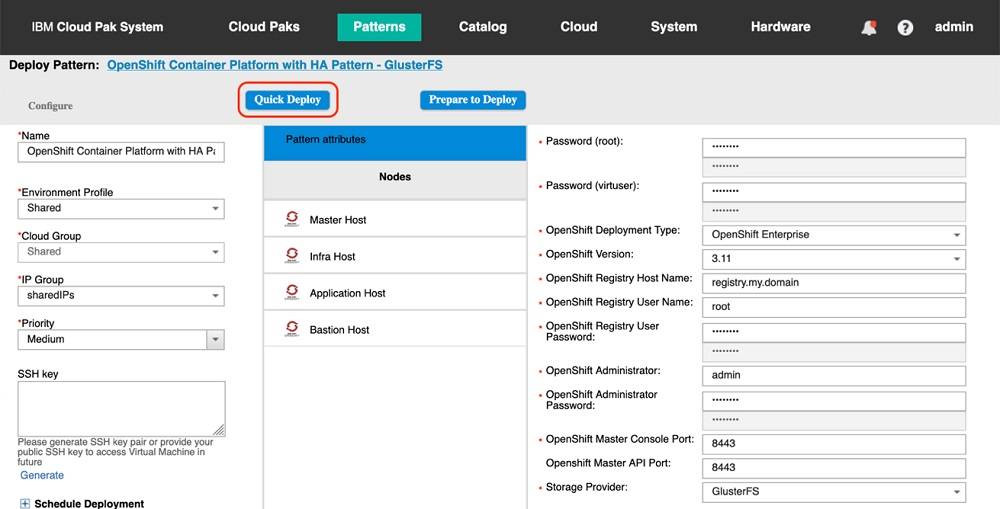 Step 4. Upon completion, your Virtual System Instance page should look as shown in Figure 20. Note within the History section that the final step of deployment takes more than 50 minutes to complete.

Your Red Hat OpenShift Container Platform environment has seven routes to pods defined on its Infra (proxy) nodes. Logon to one of the three Master nodes and run the command oc get routes –all-namespaces to obtain those routes. We will need this information to ensure that the appropriate DNS hostnames are used when accessing the environment.

Note that each route here contains a Domain Name System, or DNS, name that is a concatenation of the following:

For the purpose of this tutorial, you should add the seven DNS entries to the local hosts file and point those to the first proxy node. Simply replace <ip_infra1> with the actual IP address of your first proxy node and include the entries below in your local /etc/hosts file (or equivalent on Windows: C:\Windows\System32\Drivers\etc\hosts). Obviously, this makes the first proxy node a single point of failure.

Once you ensure that you have the right DNS entries in place, you should be able to access your RHOCP cluster.

Step 1. Click OpenShift Container Platform Console, as shown in Figure 22. This should take you to the RHOCP console on one of the three master nodes. (Note: In Cloud Pak System 2.3.0.0, there is a limitation with the Red Hat OpenShift cluster that gets deployed. The console link only takes you to one of the three master nodes; you cannot access the console from the other ones. This will be addressed in a future release.)

Step 2. Accept any TLS certificate warnings as your cluster has been configured with a self-signed certificate. Log on with the credentials you provided at the time of deployment of your RHOCP pattern, as shown in Figure 23. 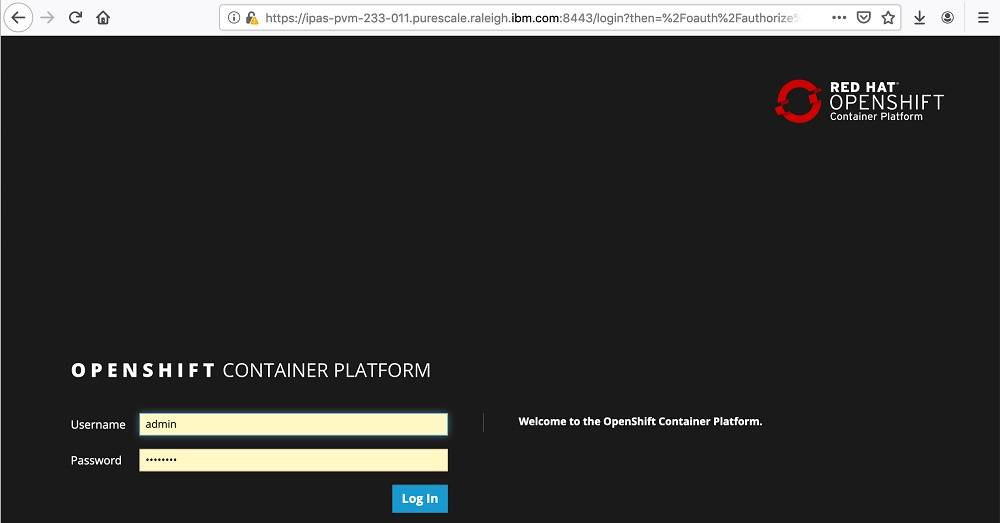 Step 3. Once logged on, you should be redirected to the console page shown in Figure 24. 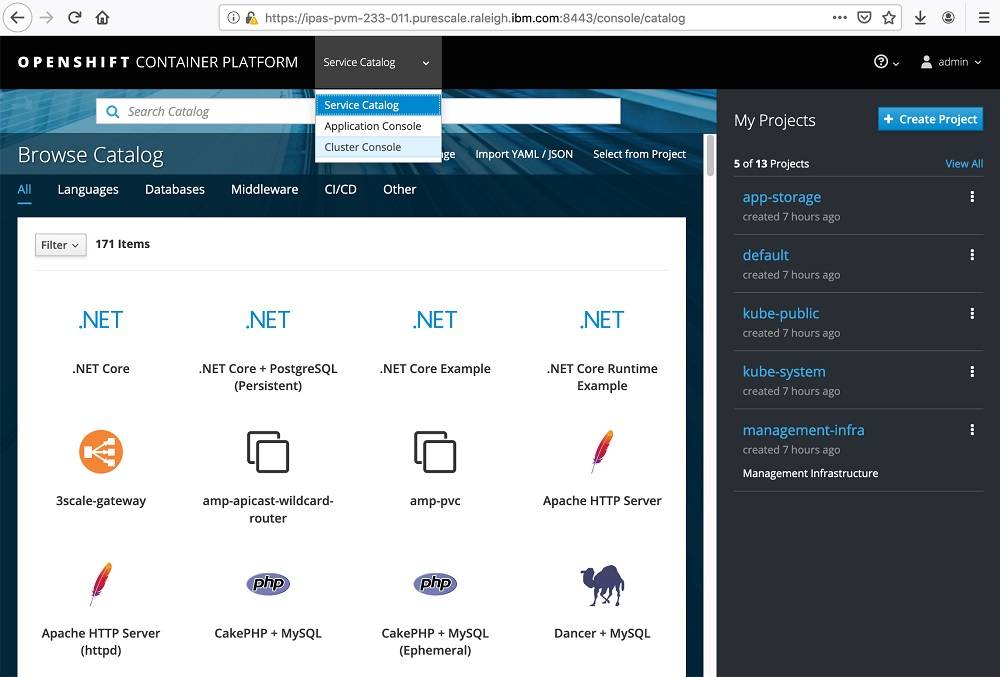 Step 4. From the drop-down menu at the top of the page, select Cluster Console, as shown in Figure 24.

Step 5. In the Cluster Console, you can explore the topology of your cluster. Click Administration > Nodes to show all the nodes of the cluster, as shown in Figure 25. Note that these match what was deployed as part of your RHOCP pattern. 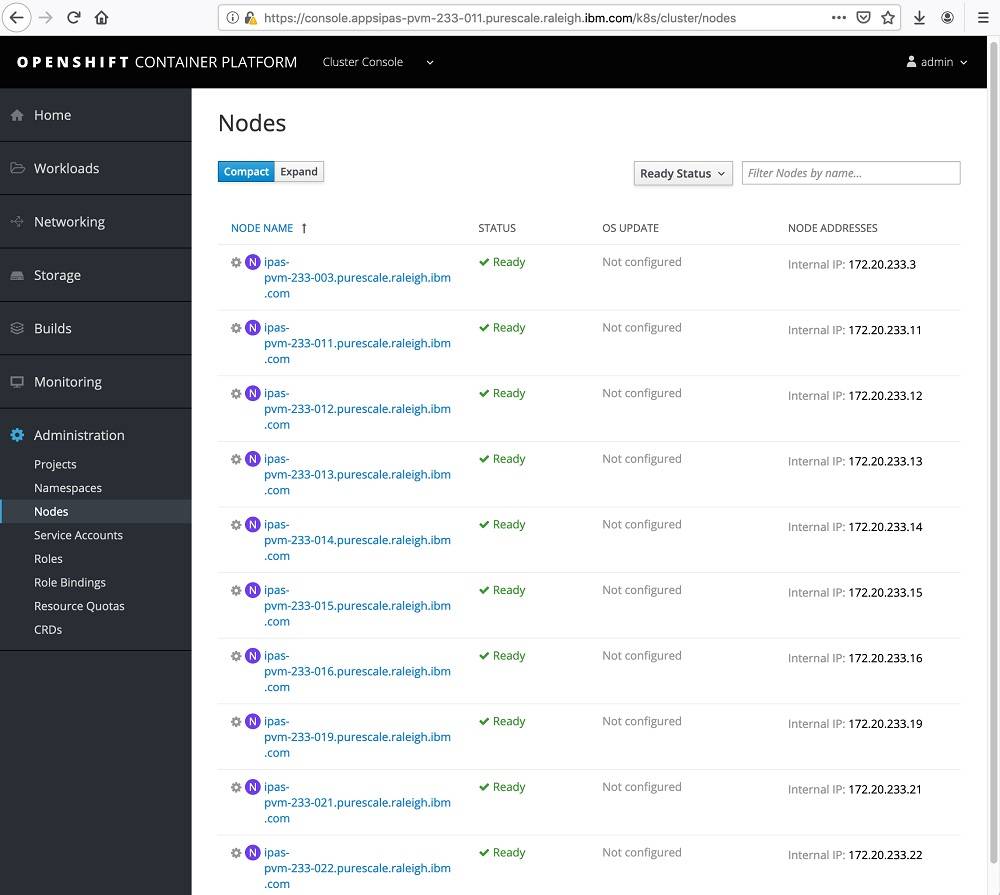 Figure 25: List of nodes displayed in the Cluster Console.

With this tutorial, you should be able to quickly get your RHOCP clusters up and running. We hope this simplifies and accelerates your deployment of software on top of OpenShift, including IBM Cloud Paks and other software that are critical to your business success.

The authors would like to thank the following for their help creating this tutorial: Prasad Ganiga, Shajeer Mohammed, Mallanagouda Patil, and Joe Wigglesworth.

Getting started with the IBM Cloud Private Pattern for IBM PureApplication

Learn how to export and import a Watson Assistant workspace

When will the data scientist be replaced by AI?