Go full throttle: The essentials of throttling in your application architecture – IBM Developer

Go full throttle: The essentials of throttling in your application architecture

Five scenarios for planning a service-oriented architecture or microservices architecture

Throttling is the threshold for limiting the number of requests to a component. This threshold is important wherever an invocation chain passes through several distributed components. For example, a call passes from an API consumer through various layers of the architecture before it reaches the system of record where the server responds to the request. If throttling is not configured correctly, the infrastructure is at risk of accidental or malicious overload. By taking time to correctly design the throttling implementation, you can dramatically reduce this risk.

This article covers throttling concepts and key considerations for five throttling scenarios. It describes throttling in the context of a service-oriented architecture (SOA) or microservices architecture. For example, you can use throttling to protect a service host or to limit a user to the agreed service-level agreement (SLA).

To help you understand throttling and the scenarios that are presented in this article, you must understand the following terms:

An overview of throttling

When a threshold is reached, more requests arrive than can be processed. The throttled messages must be queued or rejected. If a queuing solution is implemented, all messages are put into a first-in first-out (FIFO) queue. When the service has capacity, it retrieves messages from this queue and processes them. When the request rate is greater, the available capacity messages are processed in order and are not lost. If a rejection solution is implemented and no spare capacity is available, messages are discarded.

A service or API can be both a consumer and a provider. However, an application can only be a consumer. The following sections highlight the complexities of five scenarios to provide a basic understanding of the risks when you use throttling.

Provider-only throttling is commonly used throughout the industry. Infrastructure designers tend to believe that they can protect their business if they manage the incoming traffic to each service.

If you use provider-only throttling, the SLA is not enforced. In this case, a single consumer can use 100% of the infrastructure to the detriment of the other consumers. In addition, no tracking is available to help size future capacity requirements for the provider service or API.

The difficulty here is that the consumer has no limits and the provider does. Therefore, if consumer requests exceed the provider throttle threshold, messages are discarded or queued, which can cause failures or worsen performance for the consumer. However, you can track (or log) the number of consumer and provider requests.

The following figure shows an example of provider-only throttling. It illustrates a single provider service that is throttled and two consumers.

The following figure shows a simple scenario of consumer-only throttling.

The following figure shows a single service that is called by a single consumer and depends on two back-end services. The consumer is limited to 1,000 messages per second, but the downstream services cannot handle that quantity of load.

When you negotiate this SLA, the capacity of service A is validated. However, it is often impractical to validate all dependencies of service A. As shown in the following diagram, when a new application (consumer B) is registered, it has a new SLA with service A.

By adding throttling between service A and service Z, the platform can be released without initially scaling out service Z. Service Z can then be scaled out in the future if required.

For each request to service A, service A makes one request to service Y and 1 – 50 requests to service Z, depending on the attributes that are passed to service A. This scenario is referred to as application consumer and service API provider-only throttling. Services A, Y, and Z have a rate that limits the implementation that queues the request if the rate limit goes above the desired threshold.

However, when service A reaches its peak throughput, the quality of service B calling service Y might drop significantly because its requests are queued. To avoid this drop in quality, the maximum capacity of service Y must be higher than service A or service B, depending on which service has the higher capacity. 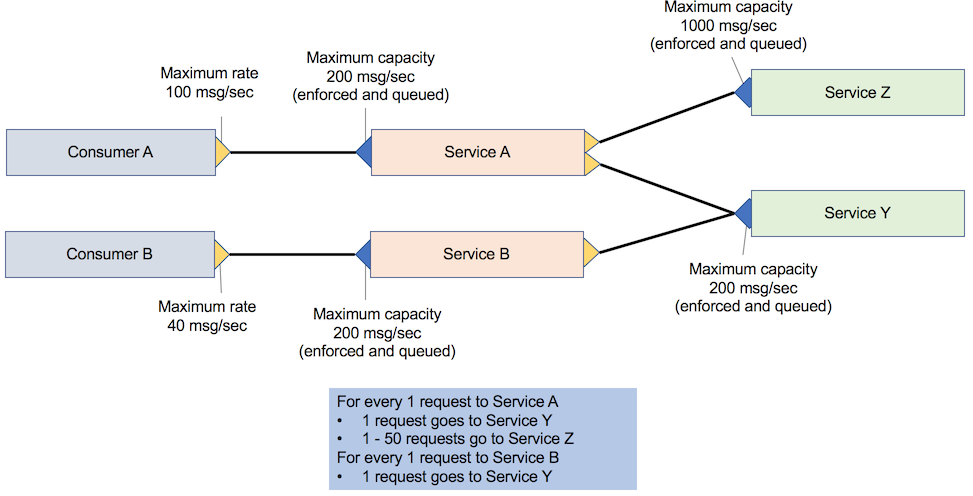 The following figure shows a scenario where all providers and all consumers are throttled. 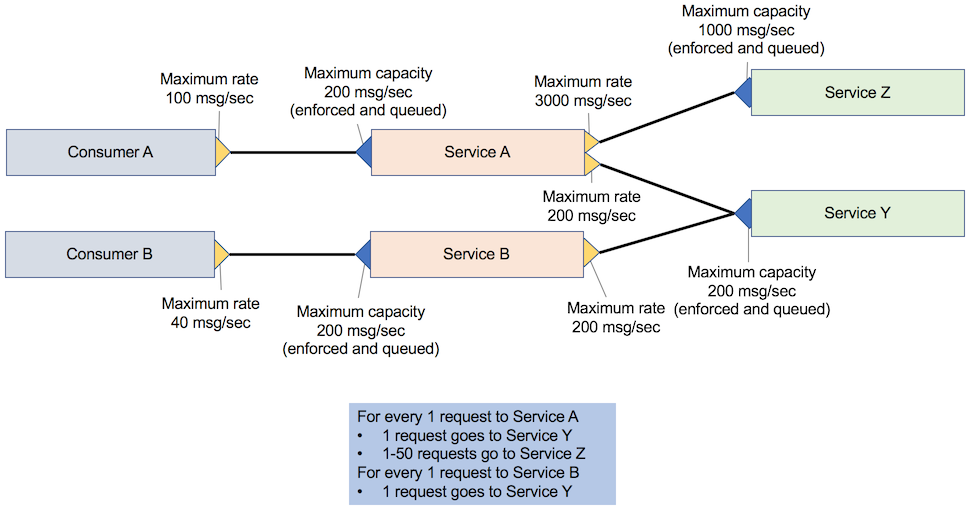 This article highlighted the key concepts of throttling and provided guidance for five throttling scenarios. It showed examples of the importance of both consumer and provider throttling. By configuring throttling correctly, you can greatly reduce the risk of accidental or malicious overload in your infrastructure.

Thank you to Kim Clark, Integration Portfolio Architect for IBM UK, for his assistance in reviewing this article.

App Transformers: Application Modernization is great, but what about my data?!?