An introduction to the Unified Modeling Language – IBM Developer

Getting started with visual modeling of your software

Way back in the late twentieth century — 1997 to be exact — the Object Management Group (OMG) released the Unified Modeling Language (UML). One of the purposes of UML was to provide the development community with a stable and common design language that could be used to develop and build computer applications. UML brought forth a unified standard modeling notation that IT professionals had been wanting for years. Using UML, IT professionals could now read and disseminate system structure and design plans — just as construction workers have been doing for years with blueprints of buildings.

It is now the twenty-first century — 2003 to be precise — and UML has gained traction in our profession. On 75 percent of the resumes I see, there is a bullet point claiming knowledge of UML. However, after speaking with a majority of these job candidates, it becomes clear that they do not truly know UML. Typically, they are either using it as a buzz word, or they have had a sliver of exposure to UML. This lack of understanding inspired me to write this quick introduction to UML, focused on the basic diagrams used in visual modeling. When you are finished reading you will not have enough knowledge to put UML on your resume, but you will have a starting point for digging more deeply into the language.

As I mentioned, UML was meant to be a unifying language enabling IT professionals to model computer applications. The primary authors were Jim Rumbaugh, Ivar Jacobson, and Grady Booch, who originally had their own competing methods (OMT, OOSE, and Booch). Eventually, they joined forces and brought about an open standard. (Sound familiar? A similar phenomenon spawned J2EE, SOAP, and Linux.) One reason UML has become a standard_modeling language is that it is programming-language independent. (UML modeling tools from IBM Rational are used extensively in J2EE shops as well in .NET shops.) Also, the UML notation set is a language and not a methodology. This is important, because a language, as opposed to a methodology, can easily fit into any company’s way of conducting business without requiring change.

Build your next app quickly and easily with IBM Cloud Lite. If you’re new to IBM Cloud, check out the IBM Cloud Getting Started docs.

Since UML is not a methodology, it does not require any formal work products (i.e., “artifacts” in IBM Rational Unified Process® lingo). Yet it does provide several types of diagrams that, when used within a given methodology, increase the ease of understanding an application under development. There is more to UML than these diagrams, but for my purposes here, the diagrams offer a good introduction to the language and the principles behind its use. By placing standard UML diagrams in your methodology’s work products, you make it easier for UML-proficient people to join your project and quickly become productive. The most useful, standard UML diagrams are: use case diagram, class diagram, sequence diagram, statechart diagram, activity diagram, component diagram, and deployment diagram.

It is beyond the scope of this introductory article to go into great detail about each type of diagram. Instead, I will provide you with enough information for a general understanding of each one and then supply more details in later articles.

A use case illustrates a unit of functionality provided by the system. The main purpose of the use-case diagram is to help development teams visualize the functional requirements of a system, including the relationship of “actors” (human beings who will interact with the system) to essential processes, as well as the relationships among different use cases. Use-case diagrams generally show groups of use cases — either all use cases for the complete system, or a breakout of a particular group of use cases with related functionality (e.g., all security administration-related use cases). To show a use case on a use-case diagram, you draw an oval in the middle of the diagram and put the name of the use case in the center of, or below, the oval. To draw an actor (indicating a system user) on a use-case diagram, you draw a stick person to the left or right of your diagram (and just in case you’re wondering, some people draw prettier stick people than others). Use simple lines to depict relationships between actors and use cases, as shown in Figure 1. 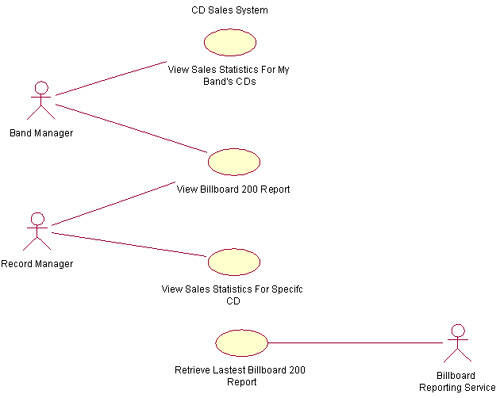 In addition, the absence of use cases in this diagram shows what the system doesn’t do. For example, it does not provide a way for a band manager to listen to songs from the different albums on the Billboard 200 — i.e., we see no reference to a use case called Listen to Songs from Billboard 200. This absence is not a trivial matter. With clear and simple use-case descriptions provided on such a diagram, a project sponsor can easily see if needed functionality is present or not present in the system.

In my experience, almost every developer knows what this diagram is, yet I find that most programmers draw the relationship lines incorrectly. For a class diagram like the one in Figure 3, you should draw the inheritance relationship 1 using a line with an arrowhead at the top pointing to the super class, and the arrowhead should be a completed triangle. (Note: For more information on inheritance and other object-oriented principles, see the Java tutorial What Is Inheritance?) An association relationship should be a solid line if both classes are aware of each other and a line with an open arrowhead if the association is known by only one of the classes.

Figure 3: A complete class diagram, including the class object shown in Figure 2

A class diagram can incorporate many more concepts, which we will cover later in this article series.

Reading a sequence diagram is very simple. Start at the top left corner with the “driver” class instance that starts the sequence. Then follow each message down the diagram. Remember: Even though the example sequence diagram in Figure 4 shows a return message for each sent message, this is optional.

By reading our sample sequence diagram in Figure 4, you can see how to create a CD Sales Report. The aServlet object is our example driver. aServlet sends a message to the ReportGenerator class instance named gen. The message is labeled generateCDSalesReport, which means that the ReportGenerator object implements this message handler. On closer inspection, the generateCDSalesReport message label has cdId in parentheses, which means that aServlet is passing a variable named cdId with the message. When gen instance receives a generateCDSalesReport message, it then makes subsequent calls to the CDSalesReport class, and an actual instance of a CDSalesReport called aCDReport gets returned. The gen instance then makes calls to the returned aCDReport instance, passing it parameters on each message call. At the end of the sequence, the gen instance returns aCDReport to its caller aServlet.

Please note: The sequence diagram in Figure 4 is arguably too detailed for a typical sequence diagram. However, I believe it is simple enough to understand, and it shows how nested calls are drawn. Also, with junior developers, sometimes it is necessary to break down sequences to this explicit level to help them understand what they are supposed to do.

Figure 5: Statechart diagram showing the various states that classes pass through in a functioning system 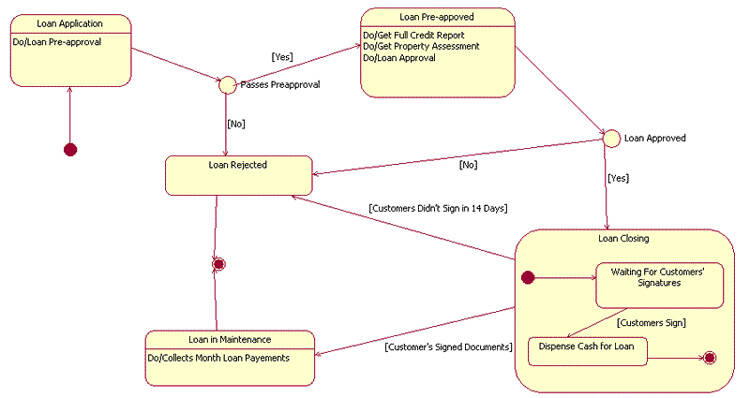 The example statechart diagram in Figure 5 shows some of the potential information they can communicate. For instance, you can tell that loan processing begins in the Loan Application state. When the pre-approval process is done, depending on the outcome, you move to either the Loan Pre-approved state or the Loan Rejected state. This decision, which is made during the transition process, is shown with a decision point — the empty circle in the transition line. By looking at the example, a person can tell that a loan cannot go from the Loan Pre-Approved state to the Loan in Maintenance state without going through the Loan Closing state. Also, by looking at our example diagram, a person can tell that all loans will end in either the Loan Rejected state or the Loan in Maintenance state.

Figure 6: Activity diagram, with two swimlanes to indicate control of activity by two objects: the band manager, and the reporting tool

A component diagram provides a physical view of the system. Its purpose is to show the dependencies that the software has on the other software components (e.g., software libraries) in the system. The diagram can be shown at a very high level, with just the large-grain components, or it can be shown at the component package level. (Note: The phrase component package level is a programming language-neutral way of referring to class container levels such as .NET’s namespaces (e.g., System.Web.UI) or Java’s packages (e.g., java.util).)

The deployment diagram shows how a system will be physically deployed in the hardware environment. Its purpose is to show where the different components of the system will physically run and how they will communicate with each other. Since the diagram models the physical runtime, a system’s production staff will make considerable use of this diagram.

The notation in a deployment diagram includes the notation elements used in a component diagram, with a couple of additions, including the concept of a node. A node represents either a physical machine or a virtual machine node (e.g., a mainframe node). To model a node, simply draw a three-dimensional cube with the name of the node at the top of the cube. Use the naming convention used in sequence diagrams: (instance name) : (instance type) (e.g., “w3reporting.myco.com : Application Server”). 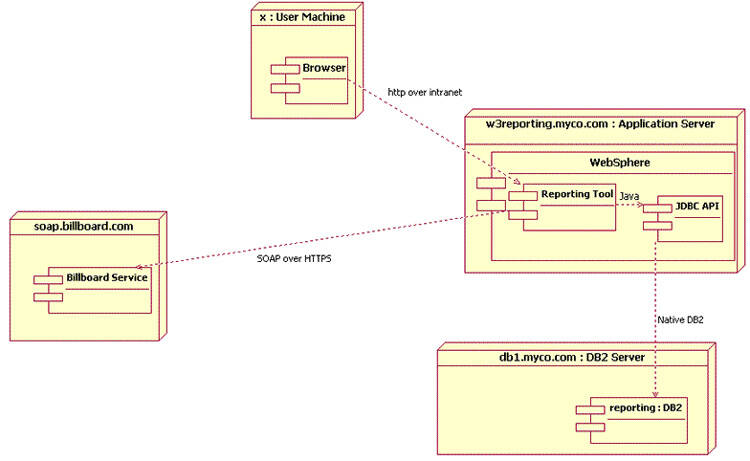 The deployment diagram in Figure 8 shows that the users access the Reporting Tool by using a browser running on their local machine and connecting via HTTP over their company’s intranet to the Reporting Tool. This tool physically runs on the Application Server named w3reporting.myco.com. The diagram shows the Reporting Tool component drawn inside of IBM WebSphere, which in turn is drawn inside of the node w3.reporting.myco.com. The Reporting Tool connects to its reporting database using the Java language to IBM DB2’s JDBC interface, which then communicates to the actual DB2 database running on the server named db1.myco.com using native DB2 communication. In addition to talking to the reporting database, the Report Tool component communicates via SOAP over HTTPS to the Billboard Service.

Although this article provides only a brief introduction to Unified Modeling Language, I encourage you to start applying the information you have learned here to your own projects and to dig more deeply into UML. There are several software tools that help you to integrate UML diagrams into your software development process, but even without automated tools, you can use markers on a whiteboard or paper and pencils to draw your UML diagrams and still achieve benefits.