Use JMeter as a watchdog

When you hear the term “watchdog,” what does that conjure up in your mind? Something meant to guard, protect, or notify? Something that barks, snarls, or yells? Something with alarms, sirens, or blow horns? Depending on the context, your mind’s eye image may be spot on with those descriptions, but in this case, let’s get a bit more technical with a different kind of watchdog: JMeter.

In this tutorial, we introduce you to Apache JMeter, “a 100% pure Java application designed to load test functional behavior and measure performance.” Learn how to easily configure JMeter to monitor an application for various events so that you can identity problems quickly and fix them before they affect your end users.

Keeping web sites readily available and healthy is a challenge. Using the DevOps practice of continuous integration begs the complimentary use of test automation to ensure code deliverable quality. Using JMeter in the testing domain not only covers function and performance, but also monitoring and notification capabilities when failures are encountered.

There are other test tools to choose from and each environment will have its requirements. Using the example JMeter test plan provided (based on a production level custom test plan), along with gained knowledge, we feel it’s both simple and straightforward to use compared to other test tools. Using JMeter and techniques shown, we’ve developed around 200 test cases running against four environments and associated systems/services every hour for years. Having this testing in place for our suite of applications, along with email notifications and results reporting, provides a level of confidence that is priceless.

To use JMeter, you need to do the following:

Note: If you run into any path-related issues in subsequent steps, you probably want to ensure these optional prerequisites are complete.

Follow the steps in this section to get up and running with JMeter. For detailed information, visit Apache JMeter Getting Started.

Once you’ve completed the prerequisites, you can install the JMeter software:

To start the JMeter application, launch one of the following commands:

The respective command file is found in the application’s bin directory. Once launched, after a short time, the JMeter (GUI) application should appear. 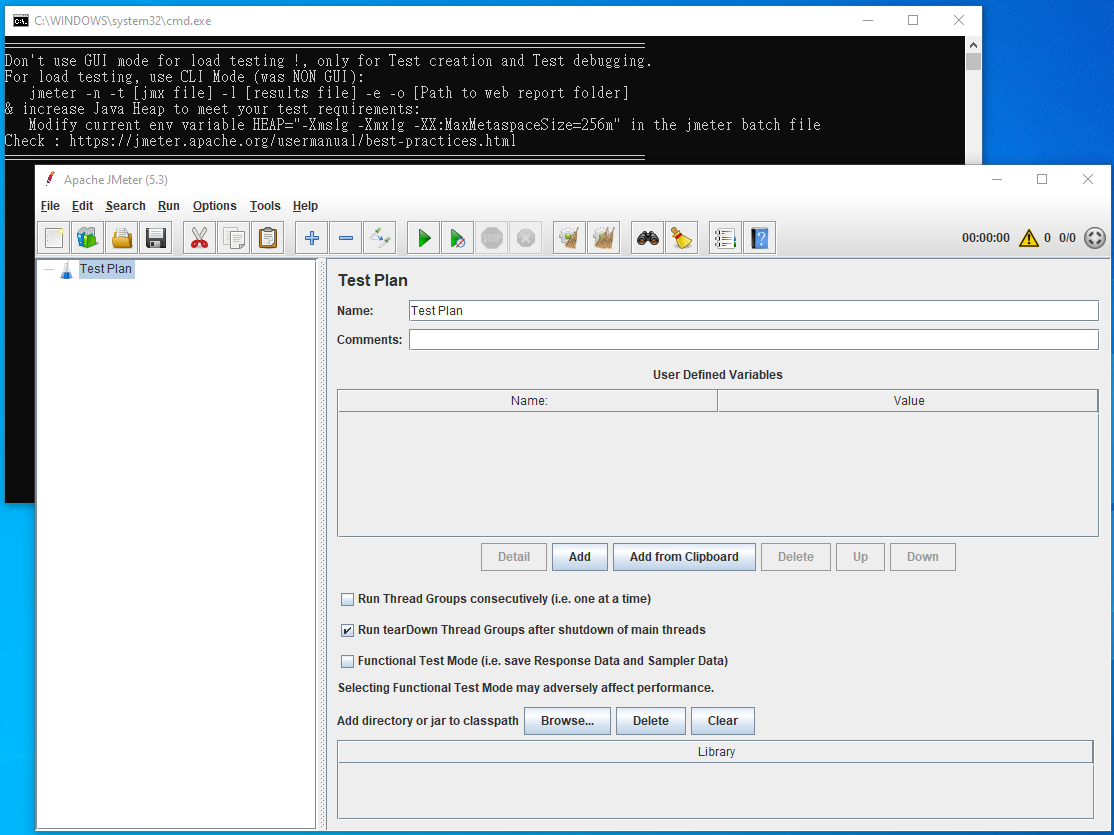 For the purposes of this tutorial, you will create a mock website to execute tests against. The mock site serves as the target application for the provided sample JMeter test plan. We will simulate an outage and other problems and show you how to use JMeter to identify and monitor these issues. For this purpose, multiple (mock) web applications will be created using Node.js.

Node.js is a popular asynchronous event-driven JavaScript runtime used to build scalable network applications. In this tutorial, Node.js provides the infrastructure and custom-developed code for the mock websites. You need to install Node.js, its package manager (npm), and http-server, a simple command-line HTTP server.

npm is the package manager for the Node.js JavaScript platform. It puts modules in place so that node can find them and manages dependency conflicts intelligently.

http-server is a simple, zero-configuration command-line http server. It is powerful enough for production usage, but it’s simple and hackable enough to be used for testing, local development, and learning.

npm and http-server provide the artifacts needed to create the mock websites that we need JMeter to test.

Use the Node.js command prompt to install the package (globally) with the npm command:

Source code for the mock websites is provided. Download and extract the necessary artifacts. We recommend that you set up a projects directory to hold the source code. An example project directory structure might look like the following.

You can start the provided mock sites collectively or individually. Below are steps for both ways.

To start them all at once:

To start each site individually, use the following steps.

Terminate the http-server command for a site by pressing Ctrl+C from within the command prompt window for that site.

Step 4. Get an introduction to the JMeter test plan

Check out the sample JMeter test plan. The sample contains tests that we will show you how to execute against the mock sites so that you’ll get a feel for how JMeter works. Have the sample test plan ready for testing.

This section gives you a high-level understanding of the various elements of a JMeter test plan. If you want more details about these elements, refer to the JMeter web site.

There are two types of controllers that drive the processing of a test in JMeter: samplers and logical controllers.

Before running a JMeter test plan, you need to configure it to the environment being tested. To modify the configuration for the provided sample test plan (Watchdog.jmx), open the plan in the JMeter application GUI. From the main menu area, click File > Open and select the test plan to open.

To ensure the proper interested parties receive notifications, you need to configure some variables: 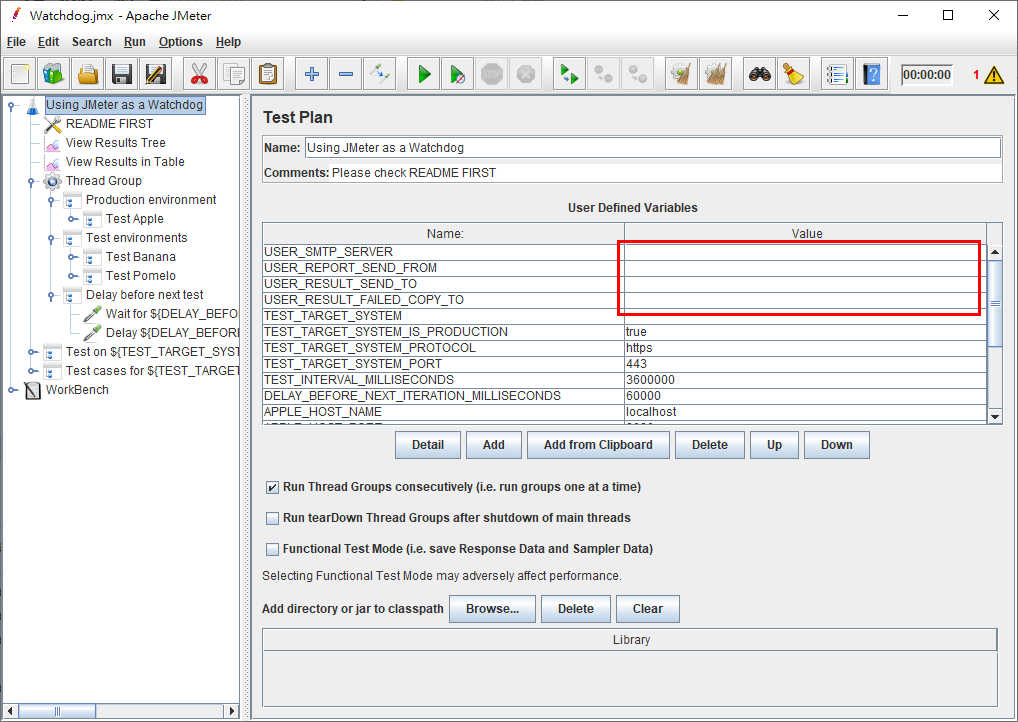 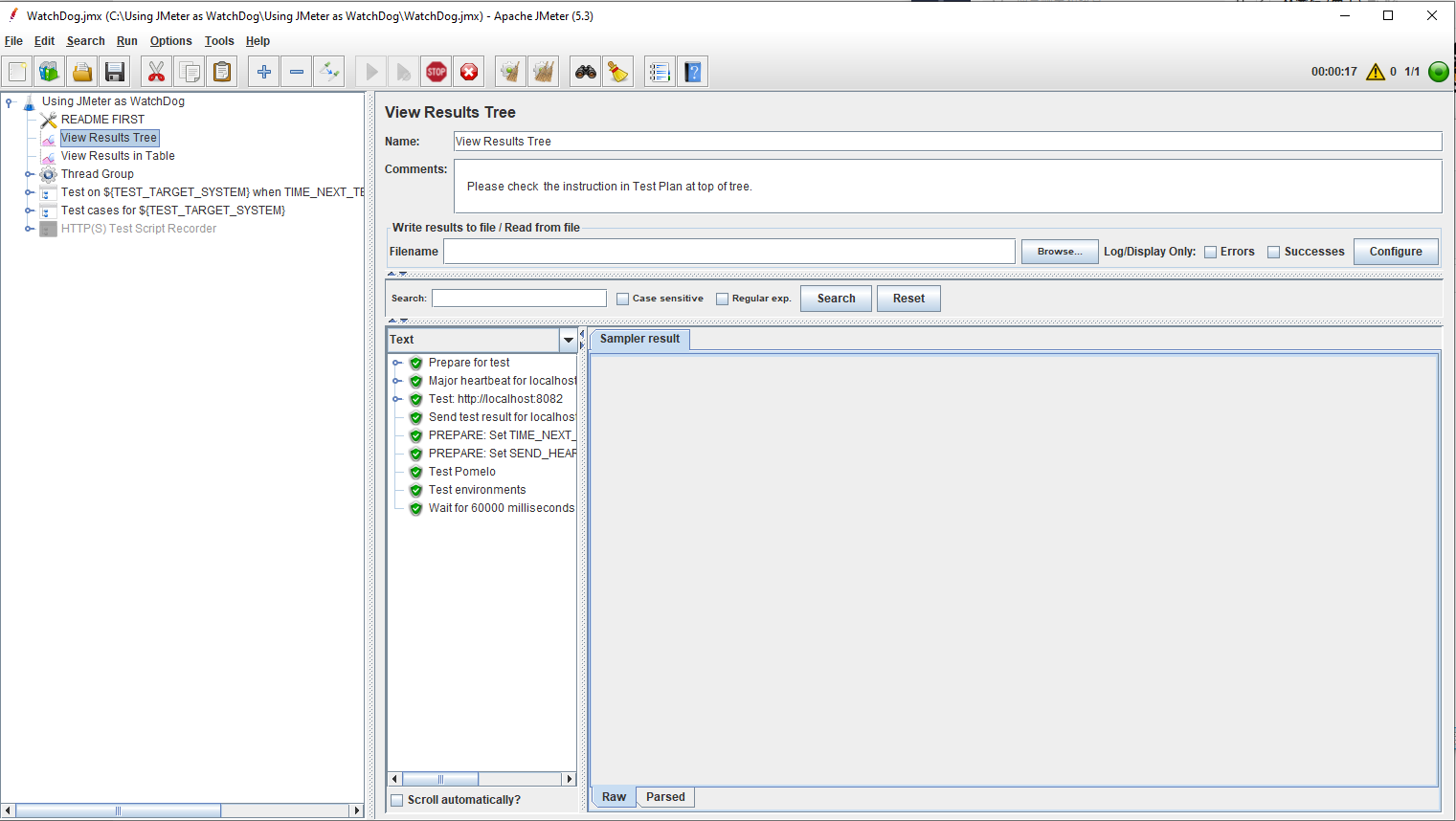 Simulate the outage (heartbeat not available)

To avoid failed test cases flooding the test report, the heartbeat verification is separated from the regular tests. The HEARTBEAT_NOT_AVAILABLE notification is configured to be sent every hour, but target site availability is checked every minute. In this example, page monitor.html is the heartbeat of the application.

Simulate the outage by doing the following:

The following image shows the termination of the sample websites:

The following image shows a “HEARTBEAT NOT AVAILABLE” notice: 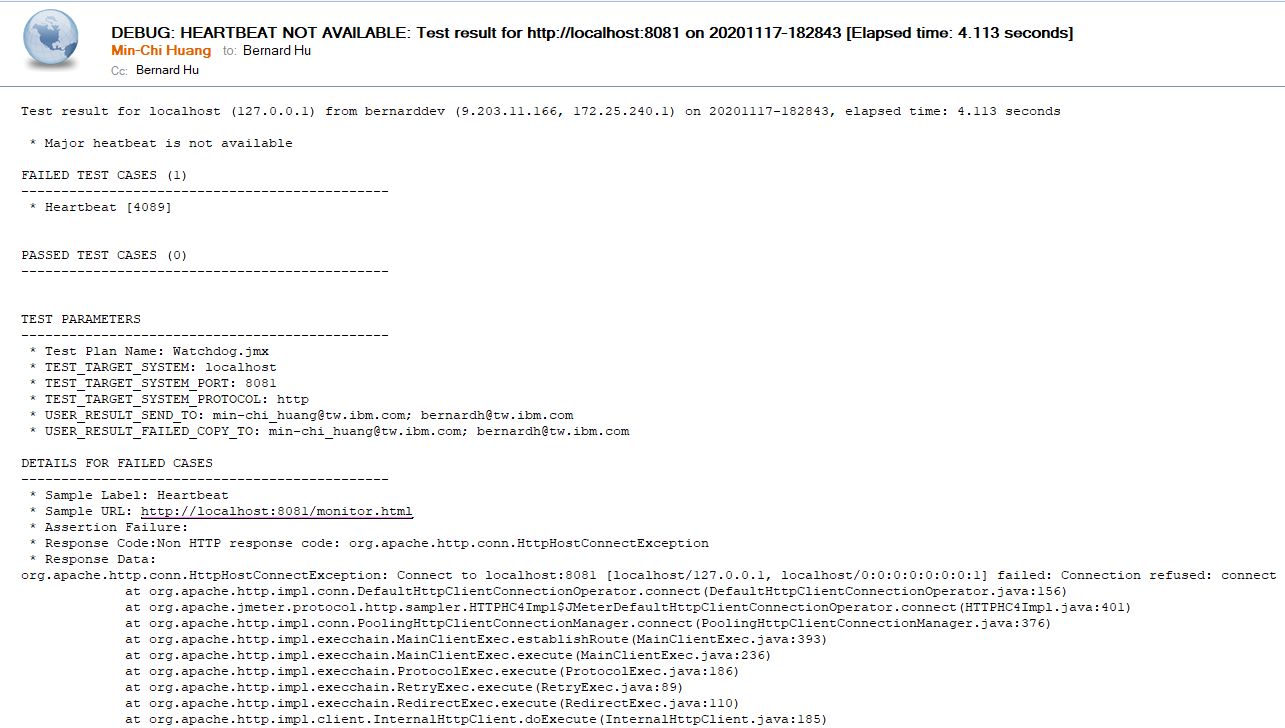 While JMeter continues to run, it checks the site availability every minute.

Try to bring up the mock Banana website by following these steps:

You may simulate the assertion failure by changing the file name of web page in the mock site:

The following image shows the website resources after changing the file name:

The following image shows the failure notice for test results:

Now that you’ve seen both success and failure scenarios using the sample JMeter test plan, let’s look at some key points to explain on how it really works.

The major Thread Group is defined to run forever and includes both production and test environments. The target applications are not necessarily tested continuously. This means that delays are often used for test iterations using a time interval. In the major Thread Group, there is a Test Action with a default pause duration of 60 seconds defined with variable DELAY_BEFORE_NEXT_ITERATION_MILLISECONDS. This provides a pause or delay until the next test iteration begins against the target systems.

Test the target systems in the major thread group

In this module controller, the first sampler tests if the current time is greater than the next scheduled time (TIME_NEXT_TEST_XXX) of the target system that is due for testing. The variable RUN_TEST_IN_THIS_ITERATION is set as true and the descendant of the following ‘if’ controller will be run.

Prepare for the test

Check the availability of the target system

Finally, the test cases (samplers) are executed. The assertion can be appended as a post-processor action to verify the response.

How the report is constructed

Using a pre-processor script before each test is the secret of how the report is constructed. In the pre-processor above, the script does the following:

Since the test result of all samplers will be included, the prefixes are defined and used as a way to ignore or treat a failed result as PASSED. The prefixes are as follows:

Send the report via an email notification

The Mailer Visualizer listener in JMeter facilitates sending test results; our example uses the SMTP Sampler. It sends an email based on or using the following information:

Send email to debug.mail.address instead of actual recipients

The type of testing preformed will depend on the type and amount of configuration needed. JMeter is highly configurable per its various properties files. One such JMeter properties file is users.properties. For details, visit Apache JMeter Properties Reference.

A particular property that is used in the example provided is debug.mail.address, which can be defined in the user.properties file. It’s recommended to initially assign yourself (as tester) to this property. Any test result notifications will be sent to assigned users of this property instead of the ‘Recipients’ variables. This is a preferred approach when initially developing a test plan as it overrides and prevents having to modify or use the ‘Recipients’ variables, which may ultimately contain a different list of users. Locate the properties file (JMeter bin directory) and use a favorite editor to make recommended changes.

For load testing, you must run JMeter using command line interface (CLI) this mode (non-GUI) to get the optimal results. To do so, use the following command options:

This specifies JMeter is to run in CLI mode:

Name of JMX file that contains the Test Plan:

By now, hopefully you’ve gained an appreciation of Apache JMeter’s capabilities, a better working knowledge of the test tool, as well as ideas on how you might inject JMeter into your DevOps practices. JMeter might not literally bark, snarl, or blow a horn, but it can certainly notify you of application issues and serve as a watchdog that you can count on. Sound the alarm and give JMeter a try!

The Agile Method: Everything you need to know

The Waterfall Model: Advantages, disadvantages, and when you should use it