Explore the basics of solving a regression-based machine learning problem, and get a comparative study of some of the current most popular algorithms

In this tutorial, we describe the basics of solving a regression-based machine learning problem, and give you a comparative study of some of the current most popular algorithms.

In this tutorial, we use a data set that contains various information that a home buyer considers before buying a house. We use this data to analyze how well we would be able to predict the house price given all of the other relevant information. Because a previous tutorial covered the various preprocessing steps that need to occur before creating a model, we skip those details in this tutorial. Instead, we do a detailed study of the different regression algorithms and apply it to the same data set for the sake of comparison.

Following are some popular regression algorithms that we discuss in this tutorial, along with code examples.

Linear regression models predict a continuous target when there is a linear relationship between the target and one or more predictors.

This is the most basic form of linear regression, in which the variable to be predicted depends on only one other variable. This is calculated by using the formula that is generally used in calculating the slope of a line.

The following graphs show how the model has predicted values for test data versus the actual selling price of the test values. Because simple linear regression assumes dependency on just one variable, a 3-D view doesn’t make much sense in this context. The comparison will make more sense when we discuss multiple linear regression. We show two other model metrics charts as well.

Multiple linear regressions is an extension to simple linear regression. In this setup, the target value depends on more than one variable. The number of variables depends on the use case. Usually, a subject matter expert is involved in identifying the fields that will contribute toward a better prediction of the output feature.

In the following code snippet, you see how sklearn can be used to split the data set into test and training sets. For simplicity, we assume that all of the dependent variables contribute toward making effective predictions. There are several methods like forward selection and backward elimination to choose the optimum columns required to make the most accurate predictions. The descriptions of these methods are beyond the scope of this tutorial.

The following images show some of the metrics of the model developed previously.

Even though we use exponents of the independent variables in the previous formula, this algorithm is not considered non-linear because of the linear combination of coefficients.

For creating a polynomial linear regression model, the data is preprocessed to create exponents of the variables up to the number mentioned in the degree value. In the following image, you see that the degree in the preprocessing step is set to 3, which means variables up to x3 will be generated. A polynomial feature with degree one is the same as multiple linear regressions. Changing the value of ‘degree’ to 1 in the following equation has the same output as the model created in the previous section.

A decision tree-based model builds a set of rules from the training data to be able to predict the outcome. For the sake of understanding, this algorithm is compared to trees formed through decisions. The model contains branches that represent the rules that lead to the path of the outcome, that is, the leaf. Each prediction path leads to a leaf that contains multiple values. The same principle is applied to classification-type problems as well. For regression-type problems, the final prediction is usually the average of all of the values contained in the leaf it falls under.

The following image shows an example of using sklearn to create a decision tree model.

Model performance is analyzed in the following images.

Decision trees are generally considered weak models because their performance usually is not up to the expected mark when the data set is relatively large. However, when several decision trees are combined into a single model, they provide greater accuracy. Each decision tree within this random forest is built using a subset of the training data. The number of decision trees that make this random forest is an arbitrary number that can be tuned to see the changes in accuracy. When a value to be predicted is run through this resulting model, it is the average of the values acquired from each of these individual trees.

Similar to the previous model, the following image shows an example of using sklearn to create a random forest model.

Mean squared error and R2 are some of the popular metrics used to compare different regression algorithms.

Mean squared error (MSE) is calculated by getting the mean of the squared error. Error here refers to the distance between an actual and predicted value. Closer the MSE is to 0 the better the model performance is.

Following is a graph comparing the MSE and R2 for different models. 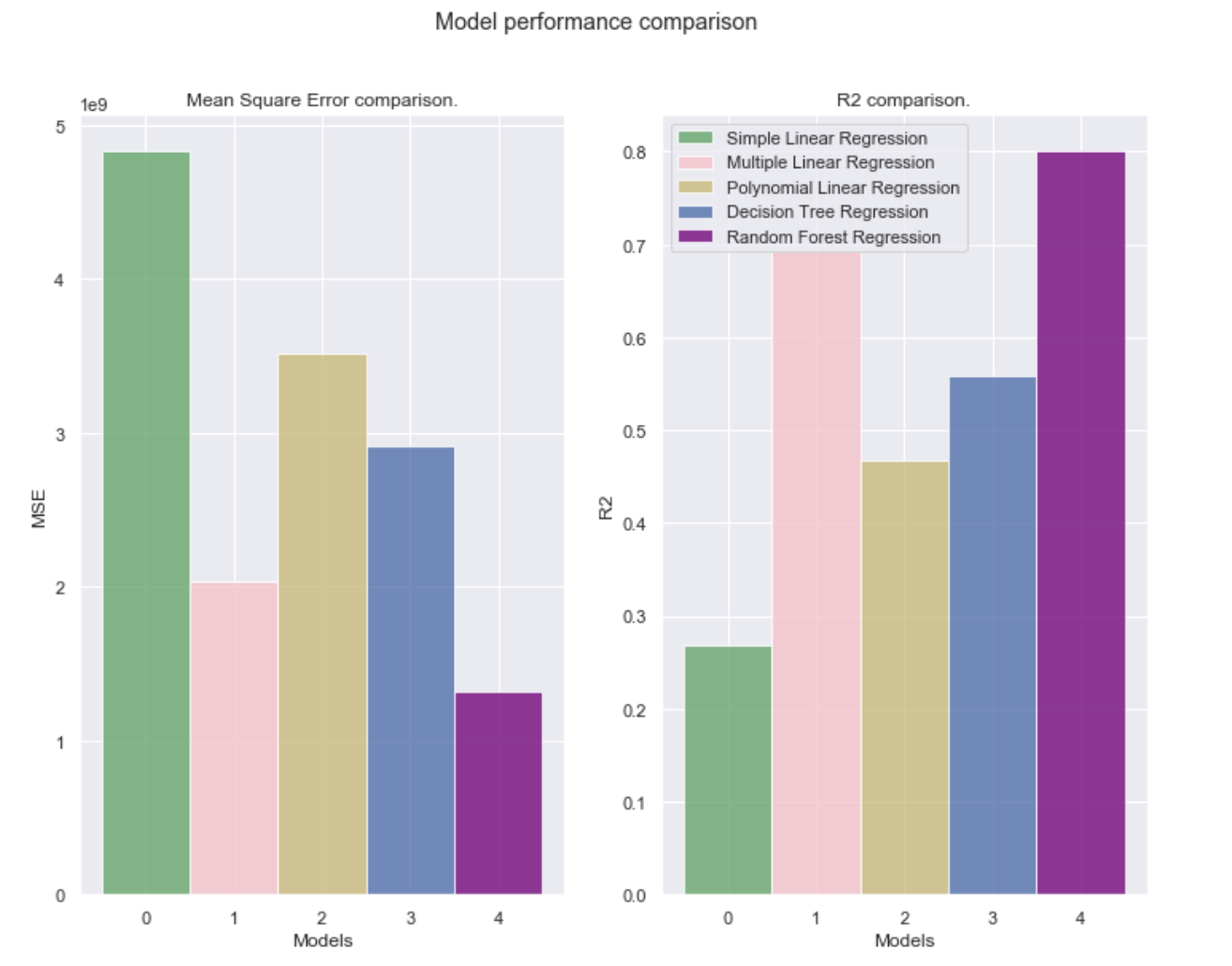 In this tutorial, we provided a high-level overview of regression algorithms and showed how they’re implemented using the scikit-learn library. We also used matplot lib to visualize some of the results.