Node.js > Use this JavaScript runtime environment to run JavaScript code outside the browser

Get started with Node.js

Get started with Node.js installation

This tutorial shows you 3 different ways to install the Node.js runtime and the Node.js package manager, npm: from the Node.js download page, via Homebrew (for MacOS installation), and through the Node.js Version Manager. After showing you how to install Node.js, I walk you through installing the editor, VS Code, and where you can write your source code for this learning path.

This video walks you through the steps in this Node.js tutorial:

There are several ways you can install Node.js.

The best way to install Node.js and npm is through Node.js Version Manager, or nvm. With nvm, you can install multiple versions of both the Node.js runtime and npm, and they can all coexist, though you can only specify one active version of either at a time. What I mean is, you don’t have to uninstall one version of Node.js or npm to install another, just tell nvm which one you want to use. It’s great for compatibility testing and managing your Node.js environment in general.

The easiest approach is to download the package for your platform directly from the Node.js project’s Node.js Downloads page and run the installation program. This approach is ideal for Windows users, but it also works for MacOS and Linux as well.

If you’re a Mac user, a better approach is to use Homebrew. Homebrew bills itself as the “missing package manager for MacOS.” You can use it to install and manage hundreds of different packages for MacOS.

I’ve summarized the pros and cons of each approach in the following table:

Homebrew and nvm offer automatic checksum validation (which is nice) but have limited officially supported platforms. I describe each approach in detail in the sections that follow, so you can choose the approach that is right for you.

On the Downloads page, you have to choose between the long-term support (LTS) or current release. What is the difference?

The Node.js release team designates even-numbered major releases as LTS releases. The LTS releases are supported for up to 3 years from the date of their original release, during which time the releases go from current (in the last 6 months) to active LTS (18 months, minor revisions only) to maintenance LTS (12 months, patch releases only). This means that you can be sure that an LTS release is stable for a considerable period of time.

For this tutorial, I use version 16 because, at the time of this writing, it is the current LTS release. You probably want to do the same to ensure you can follow along.

Go to the Node.js Downloads page and click on the installer that matches your platform.

As I said in the previous section, I use version 16, and this is reflected in all instructions in this section, including the video. I suggest you use version 16 (or whatever is the latest 16.x.y release at the time).

For Linux, unpack the tarball to a standard location, such as /usr/local/lib/nodejs, making sure that the path to the Node.js bin directory matches your PATH environment variable. See the Node.js Installation help from the Node.js GitHub Wiki for more detailed instructions.

Now, skip to the Verify the Installation section to confirm that Node.js and npm were installed correctly.

Going forward, when you want to upgrade your version of Node.js, download the new installer and it will replace the current version.

Using this method of installation, you can have only one version of Node.js and npm installed at a time. If you want to have multiple versions installed and switch back and forth among them (for compatibility testing, for example), I recommend you use nvm (See the Use nvm to install Node.js on MacOS and Linux only section for details).

Use Homebrew to install Node.js on MacOS

Homebrew is a better way to manage various packages on your Mac. Whenever I need to install a familiar Linux package, I check to see if it is available as a Homebrew “formula” first before trying to install the package another way (with rare exceptions like using nvm for managing Node.js, which I show you in the next section).

To learn more about Homebrew and how to install it, check out the Homebrew Installation page.

To install the current version of Node.js and npm via Homebrew, open a Terminal window on your Mac and enter this command:

However, I highly recommend you install specific major versions of Node.js as a matter of practice, because it forces you to be aware of exactly what version you’re installing. If the specific major version you install happens to be the current version, then Homebrew will link it for you automatically (meaning, it will create symbolic links to node and npm in your PATH to the current version in the Homebrew Cellar). Plus, you can switch between installed versions by unlinking one and linking another using the brew unlink and brew link commands (though you should use this with caution, as I show you later in this section).

Now, skip to the Verify the Installation section to confirm that Node.js and npm were installed correctly.

Going forward, to upgrade Node.js use:

If there is an upgrade available, it is automatically applied for you.

With Homebrew, you can have multiple major versions of Node.js and npm installed at a time, but only one can be active. If you want to switch between them, you have to “unlink” the actively linked version and “link” the one you want to use.

On my Mac, this means that I have to jump through a few hoops (involving --force and --overwrite) to switch from version 10 to version 8, and more than once, I’ve accidentally left my system in a weird state (as in, -bash: /usr/local/bin/npm: No such file or directory). For example, here’s what I have to go through to switch from Node.js 10 to Node.js 8 and back to Node.js 10:

Yikes, what a pain! However, as you can see, I got it to work. But I ended up having to reinstall Node.js 10 because the unlink from Node.js 8 caused something to go wrong. Maybe I did something incorrectly. Maybe Homebrew just doesn’t like me. Maybe there was a full moon last night. Who knows?

If you really need to switch painlessly between versions of Node.js and npm, I highly recommend you use nvm. Also, if you want to have multiple major.minor.patch versions installed and switch back and forth among them (for compatibility testing, let’s say), you must use nvm, because Homebrew only supports installing the latest major.minor.patch release.

Use nvm to install Node.js on MacOS and Linux only

Other unsupported platforms are listed as well under nvm Important Notes.

Installing nvm is a snap. Go to the creationix GitHub repo and scroll down to the Installation section (or go to the nvm GitHub page. Copy the install command and paste it into a Terminal window or command prompt:

It takes just a few seconds (less than 10 on my Mac) to download and install.

The install script makes changes to your .bash_profile (MacOS) or .profile (Linux), so when the script finishes, you need to rerun your profile script using your favorite method for doing so. I’m lazy, so I just stop the Terminal window and open a new one.

Verify that nvm installed correctly by running the nvm --version command. You should see output like this:

To install Node.js and npm, run the nvm install --lts command, which tells nvm to install the LTS version (which at the time of this writing is Node.js 8.11.2 and npm 5.6.0):

Now, verify the installation using the instructions in the next section.

Switching between multiple versions with nvm

You can install multiple versions of Node.js and npm (including any major.minor.patch combination that has been released) and switch back and forth between them. This is great for compatibility testing, for example. Suppose you want to install Node.js 16 (which at the time of this writing is 16.13.0):

Then switch back to Node.js 8 (I’ll assume you’ve been following along with this tutorial, and the version in use is 10):

Check it out! I can swap out the Node runtime on the PATH with a simple command. Pretty cool.

Notice that the version of npm is also upgraded to match the version of Node you downloaded. Unless you specify otherwise, Node.js and npm are sort of a package deal (and that’s usually a good thing).

To see all the options available, just type nvm and this Help screen appears:

You can also check out the NVM documentation.

Make sure that /usr/local/bin is on your PATH environment variable, or you could see output like this:

Get the source code from GitHub

In GitHub, I have provided source code for every example in this tutorial.

Open a terminal window, navigate to a directory where you want the code to land, and enter the git clone command:

Then, navigate to the Node.js/Course directory. There, you can find all of the examples I show throughout the tutorial.

To follow along with all the tutorials in this learning path, you need an editor. I have used VS Code for a couple of years now and really like it. It’s free, open source, and has an active user community with lots of extensions, which means you’re likely to find lots of different extensions for your favorite language, platform, or file format. Plus, VS Code is built on the Electron framework, which uses Node.js under the hood.

Of course, you’re free to use whatever editor you like. For the tutorials in this series, I use VS Code, so all the screenshots and video captures you see are of VS Code.

To install VS Code, go to the Visual Studio Code page. Your browser should auto-detect your platform and prefill the drop-down list with the matching download, or you can use the drop-down list to select any other download you like. However, I recommend you visit the Download Visual Studio Code, where you can also obtain the SHA256 checksum for your download. To see the checksum, click the link at the bottom of the “See SHA-256 Hashes” page, which will expand and show a list of hashes for each file.

The file that is downloaded varies by platform. For MacOS, the downloaded file is a ZIP archive containing a MacOS APP file. Copy the file to your applications folder, so you can easily locate it later if you like.

If you’re running on Windows, the file is an installer. Instructions for installing it are on the VS Code Setup for Windows page.

If you’re running Linux, you can find setup instructions VS Code Setup for Linux page.

Once you have VS Code installed, go ahead and launch it. You should definitely check out the Marketplace, which has TONS of plug-ins.

To install a plug-in, click the Marketplace icon, search for the plug-in you want, and click Install. Figure 1 shows some of the extensions I have installed: 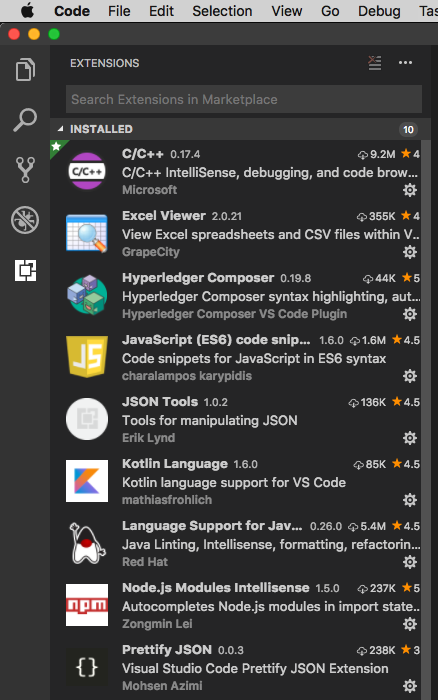 Running Node.js in VS Code

VS Code plugs into the Node.js runtime, so you can run your code from within VS Code. Follow these steps:

The JavaScript file runs in the debug window. You should see something like Figure 2 when it is finished.

Figure 2. The VS Code debug window 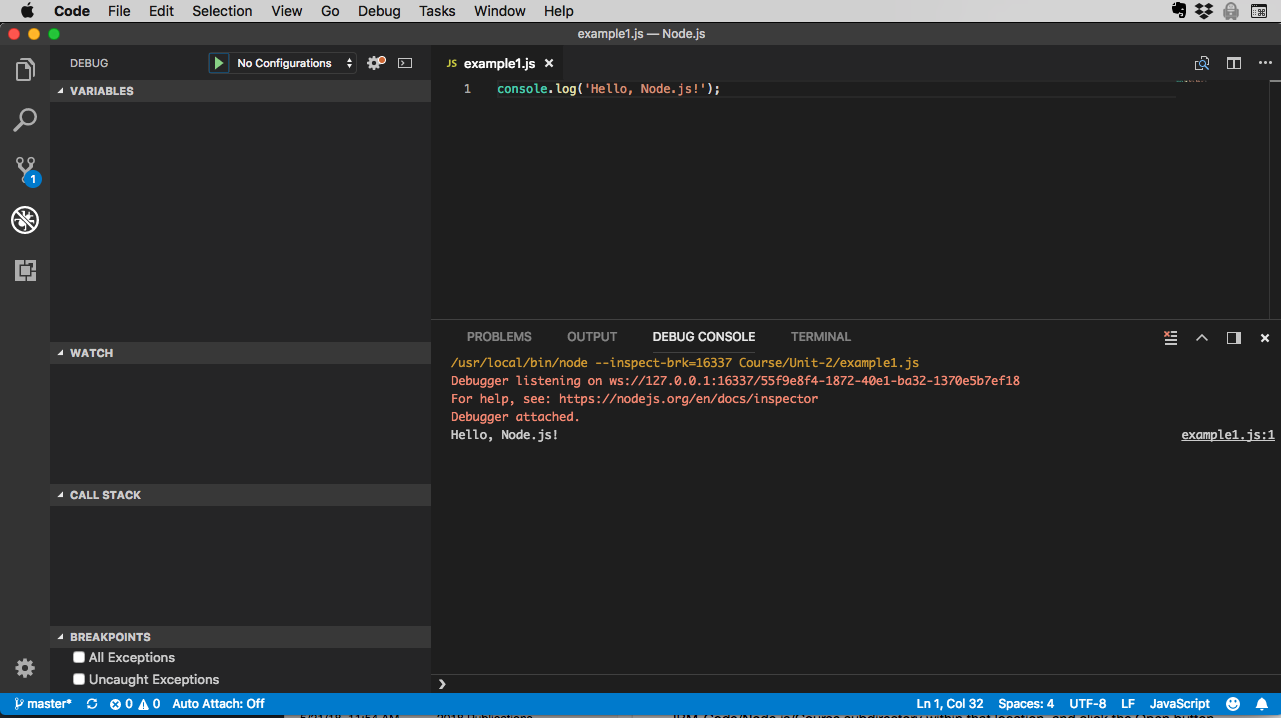 Now you can run all of the examples in this tutorial either from the command line, or from within VS Code.

In the next tutorial, I introduce you to basic Node.js concepts, and you write some JavaScript code!

Legend
Previous
Overview
Next
Take a tour of Node.js