Developers with a background in Flash or Silverlight are often surprised that applications written for HTML5 Canvas offer no special accommodations in terms of handling user input. Essentially, HTML user input involves using an event-handling system built into browsers since the earliest days of JavaScript-enabled web browsers; there’s nothing specific to HTML5 for detecting and handling user input. For example, the browser can provide low-level feedback indicating which coordinate (x,y) the user has clicked on, and that’s about it.

Handling user interaction is no different than any other low-level game architecture. There are no built-in abstractions to notify you when the user has interacted with a specific object that has been rendered on the Canvas. This provides a great degree of low-level control over how you want to handle these events. As long as you can keep various browser quirks at bay, you can ultimately tune the handling of the events for maximum efficiency according to a unique application — rather than being tied to a specific implementation.

In this article, learn techniques for handling user interaction in HTML Canvas-based games. Examples illustrate how to handle keyboard, mouse, and touch-based events. Strategies for broadcasting events to game objects, and mobile compatability, are also covered.

You can download the source code for the examples used in this article.

User interaction is handled entirely by the browser’s traditional event listener model. There is nothing new with the advent of HTML5; it’s the same event model that has been used since the early days of Netscape Navigator.

Essentially, think of an interactive application or game as a marriage between the browser event model for user input and Canvas for graphical output. There is no logical connection between the two unless you build it yourself.

The simplest types of events to listen for and handle are keyboard events. They are not dependant on the Canvas element or the user’s cursor position. Keyboard events simply require you to listen for the keydown, keyup, and keypress events at the document level.

The event listener model can vary depending upon the browser implementation, so the quickest way to get up and running is to use a library to normalize the handling of events. The following examples use jQuery to bind events. This is generally the easiest way to get started, but performance may suffer due to the level of cruft involved in jQuery’s effort to be compatible with legacy browsers. Another popular library, specifically written for speedy cross-browser keyboard event handling, is Kibo (see Related topics).

Listing 1 illustrates listening for key events and taking an appropriate action based on which key was pressed.

If your application takes place in the environment of a web browser, it’s important to keep sensible keyboard combinations in mind. While it may be technically possible to define behaviors for certain common key combinations that will override their default browser behaviors (such as control-r), this is highly frowned upon.

You typically don’t care too much about user input when the user’s cursor is not positioned within the Canvas area. Therefore, it would be better to consider the origin of (0,0) to be located at the top left of the Canvas element. Ideally, you want to be working within the local coordinate system that’s relative to the Canvas area rather than a global coordinate system that’s relative to the entire browser window.

Use the following steps to transform global window coordinates to local Canvas coordinates.

Figure 1 shows an example of the information you need to capture in terms of the global coordinate system. 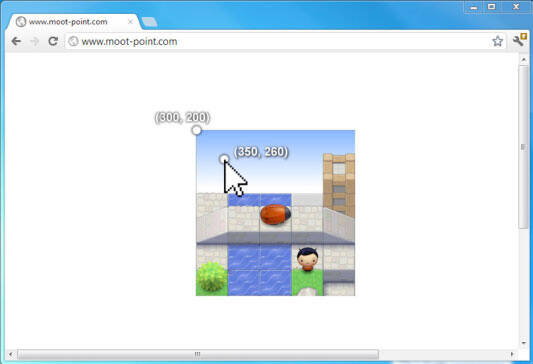 Figure 2 shows the result after transforming the mouse position into local coordinates. 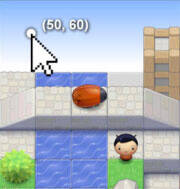 Listing 2 shows the method of determining local mouse coordinates. It is assumed you’ve defined a Canvas element in the markup, as follows: <canvas id="my_canvas"></canvas>.

Figure 3 shows an example of what can occur if a user clicks and drags an image in the browser. Although the default browser behavior makes total sense for drag and drop applications, it is not a behavior you would want in your game. 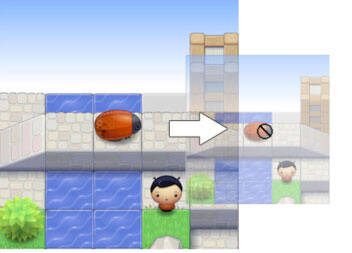 In all event handlers, add a preventDefault() line and return false from the function. The code in Listing 3 will do the trick as far as preventing both the default action and event bubbling from occurring.

Even with the code in Listing 3, you could still encounter several undesirable side effects when the user initiates a drag event on a DOM element, such as the appearance of the I-beam cursor, text selection, and so on. The drag event issue is traditionally more common with images, but it’s a good idea to also apply it to the Canvas element to prevent dragging and selections. Listing 4 shows a CSS rule to prevent selection side-effects by sprinkling in a bit of CSS.

The code in Listing 5 intentionally does not use jQuery for attaching events. jQuery does not properly handle the ondragstart and onselectstart events (if attached using jQuery, the event handlers may never fire).

You can prevent the zoom behavior by adding user-scalable=no to the viewport meta-tag. For example:

To disable all movement of the document or window using gestures, attach the event listeners in Listing 6 to the document.body file. This will essentially cancel all default browser behaviors if the user happens to tap anywhere outside of the Canvas or game area.

If you need any useful information that is captured by the event listeners to propagate down to objects rendered on the Canvas, you must build your own logic for the system. In this example, such a system would be responsible for broadcasting the click or mousemove event to all game objects that are concerned with handling one of those events.

Your exact strategy will vary based on the type of game. For instance, a 2D tileset may have a different strategy than a 3D world.

The following steps outline a naive implementation that can work well for a simple 2D application.

The click event handler might look something like Listing 7. The example assumes that you’ve already set up some kind of structure to track all of the game objects in the world. The position and dimensions of all game objects are stored in a variable called gameObjectArray.

The next step is to ensure that each game object is able to perform hit testing to determine whether the mouse coordinate collides within the bounding box region of the game object. Figure 4 shows an example of an unsuccessful hit test.

Figure 4. Out of bounds click–hit test is unsuccessful 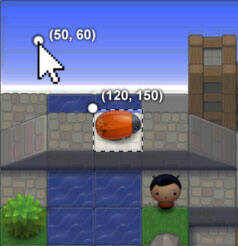 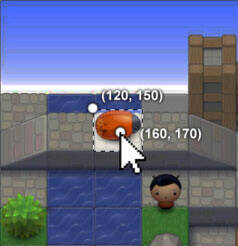 You can define a class for game objects, as in Listing 8. A hit test is performed within the onclick() function, which tests for a collision between the rectangular bounding box of the object and the mouse coordinates that are passed in as a parameter.

In many cases, it’s possible to build a more efficient implementation. For example, in a game with thousands of game objects, you definitely want to avoid testing every game object in the scene against every time an event is fired.

The following example uses jQuery custom events to fire off a synthetic event. The synthetic event is only handled by those game objects that are listening for that particular event. For the example:

The mouse click event handler is modified to simply trigger a custom event. The custom event can be given any arbitrary name. In Listing 9, it’s called handleClick.

To handle such layering, you need to know the order, or depth, of each layered game object. Canvas does not expose any logical representation of depth, so again you need to take the reigns and produce the necessary logic to handle this situation.

To introduce the concept of depth, assigning a z-index for all game objects to represent their depth is necessary. Listing 11 shows an example.

Listing 11. Adding a z-index to the Game object

To facilitate depth testing, you need to perform sorting. In Listing 12, the example structure for storing game objects is sorted such that the game object with the highest z-index occurs first in the list.

Finally, in the click function, switch things up to iterate through all game objects in the sorted array.

As soon as you encounter a positive result from a game object’s hit test, immediately break so the click does not continue to propagate. If you don’t halt the testing, as in Listing 13, the undesirable behavior of game objects at deeper depths handling the click event will continue.

Though it’s often simplest and most efficient to perform hit testing against rectangular bounding boxes, in many cases that’s not sufficient. If the game object has a more irregular shape, it might make more sense to test against a triangular or polygonal bounding area. In such cases, you would need to swap out the hit test logic in the game object’s event handler for the more advanced form of hit detection. Typically, you would refer to the realm of game collision physics for the appropriate logic.

The Canvas API offers an interesting function called IsPointInPath() that can perform polygonal collision tests. Essentially, IsPointInPath(x, y) lets you test whether the given (x,y) point falls within an arbitrary path (basically a polygonal boundary). It will return true if the provided (x,y) coordinate falls within the current path, which is defined within Canvas context.

Figure 6 shows a situation where it would be necessary to test the mouse coordinates against a non-rectangular path. In this case, it is a simple triangular path.

Figure 6. Clicking within the bounds of a triangular path

The filled path is visualized for illustration purposes only. Because the path does not have to be physically rendered on-screen for IsPointInPath() to return a useful result, it is sufficient to define the path without ever making a call to fill() or stroke() to actually draw the path. Listing 14 shows the details.

Although it is often more efficient to write the collision algorithms yourself rather than using IsPointInPath(), it can be a good tool for prototyping and rapid development.

To make the example game compatible with mobile devices, you’ll need to work with touch events rather than mouse events.

Although a tap of the finger can also be interpreted by the mobile browser as a click event, it is generally not a good approach to rely on listening to only click events on mobile browsers. A better approach is to attach listeners for specific touch events in order to guarantee the best responsiveness.

You can write a helper function that first detects whether the device supports touch events and then returns either mouse coordinates or touch coordinates accordingly. This lets calling functions agnostically process input coordinates regardless of whether you’re on a desktop or mobile platform.

Listing 15 shows an example of a device-agnostic function to capture mouse and touch events and to normalize the response.

During the initialization of the application, you can replace the earlier code to define the event listeners with a separate branch for touch-supporting devices and mouse input. It is quite straightforward to map mouse events to an equivalent touch event. For instance, mousedown is replaced with touchstart, and mouseup is replaced with touchend.

Unless you need to handle more advanced actions, such as pinching and swiping, this approach generally works well when doing a direct port of mouse events from a desktop application. A single-touch system is assumed; if multi-touch detection is needed, it would require some additional code (which is outside the scope of this article).

In this article, you learned how to handle keyboard and mouse events, and how to cancel undesired browser behavior. The article also discussed strategies for broadcasting events to game objects, and reviewed more advanced considerations for hit testing and a simple method of addressing mobile compatibility. Although the scope of user input goes far beyond this article, the typical user input scenarios offer a jumping-off point toward creating a robust, device-agnostic library to handle user input for your HTML5 application.