Given that the goal of this article is to introduce you to the Linux kernel and explore its architecture and major components, let’s start with a short tour of Linux kernel history, then look at the Linux kernel architecture from 30,000 feet, and, finally, examine its major subsystems. The Linux kernel is over six million lines of code, so this introduction is not exhaustive. Use the pointers to more content to dig in further.

A short tour of Linux history

While Linux is arguably the most popular open source operating system, its history is actually quite short considering the timeline of operating systems. In the early days of computing, programmers developed on the bare hardware in the hardware’s language. The lack of an operating system meant that only one application (and one user) could use the large and expensive device at a time. Early operating systems were developed in the 1950s to provide a simpler development experience. Examples include the General Motors Operating System (GMOS) developed for the IBM 701 and the FORTRAN Monitor System (FMS) developed by North American Aviation for the IBM 709.

Linux quickly evolved from a single-person project to a world-wide development project involving thousands of developers. One of the most important decisions for Linux was its adoption of the GNU General Public License (GPL). Under the GPL, the Linux kernel was protected from commercial exploitation, and it also benefited from the user-space development of the GNU project (of Richard Stallman, whose source dwarfs that of the Linux kernel). This allowed useful applications such as the GNU Compiler Collection (GCC) and various shell support.

Introduction to the Linux kernel

Figure 2. The fundamental architecture of the GNU/Linux operating system 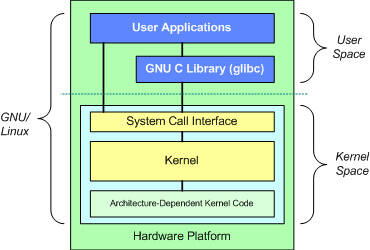 In reality, the architecture is not as clean as what is shown in Figure 2. For example, the mechanism by which system calls are handled (transitioning from the user space to the kernel space) can differ by architecture. Newer x86 central processing units (CPUs) that provide support for virtualization instructions are more efficient in this process than older x86 processors that use the traditional int 80h method.

At the top is the user, or application, space. This is where the user applications are executed. Below the user space is the kernel space. Here, the Linux kernel exists.

The Linux kernel can be further divided into three gross levels. At the top is the system call interface, which implements the basic functions such as read and write. Below the system call interface is the kernel code, which can be more accurately defined as the architecture-independent kernel code. This code is common to all of the processor architectures supported by Linux. Below this is the architecture-dependent code, which forms what is more commonly called a BSP (Board Support Package). This code serves as the processor and platform-specific code for the given architecture.

Properties of the Linux kernel

When discussing architecture of a large and complex system, you can view the system from many perspectives. One goal of an architectural decomposition is to provide a way to better understand the source, and that’s what we’ll do here.

The Linux kernel implements a number of important architectural attributes. At a high level, and at lower levels, the kernel is layered into a number of distinct subsystems. Linux can also be considered monolithic because it lumps all of the basic services into the kernel. This differs from a microkernel architecture where the kernel provides basic services such as communication, I/O, and memory and process management, and more specific services are plugged in to the microkernel layer. Each has its own advantages, but I’ll steer clear of that debate.

Over time, the Linux kernel has become efficient in terms of both memory and CPU usage, as well as extremely stable. But the most interesting aspect of Linux, given its size and complexity, is its portability. Linux can be compiled to run on a huge number of processors and platforms with different architectural constraints and needs. One example is the ability for Linux to run on a process with a memory management unit (MMU), as well as those that provide no MMU. The uClinux port of the Linux kernel provides for non-MMU support.

Major subsystems of the Linux kernel

Now let’s look at some of the major components of the Linux kernel using the breakdown shown in Figure 3 as a guide.

Figure 3. One architectural perspective of the Linux kernel 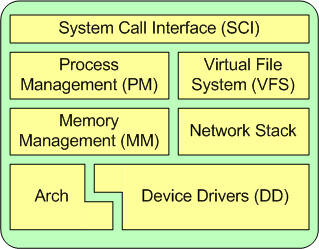 The SCI is a thin layer that provides the means to perform function calls from user space into the kernel. As discussed previously, this interface can be architecture dependent, even within the same processor family. The SCI is actually an interesting function-call multiplexing and demultiplexing service. You can find the SCI implementation in ./linux/kernel, as well as architecture-dependent portions in ./linux/arch.

What is a kernel?

As shown in Figure 3, a kernel is really nothing more than a resource manager. Whether the resource being managed is a process, memory, or hardware device, the kernel manages and arbitrates access to the resource between multiple competing users (both in the kernel and in user space).

Process management is focused on the execution of processes. In the kernel, these are called threads and represent an individual virtualization of the processor (thread code, data, stack, and CPU registers). In user space, the term process is typically used, though the Linux implementation does not separate the two concepts (processes and threads). The kernel provides an application program interface (API) through the SCI to create a new process (fork, exec, or Portable Operating System Interface [POSIX] functions), stop a process (kill, exit), and communicate and synchronize between them (signal, or POSIX mechanisms).

Also in process management is the need to share the CPU between the active threads. The kernel implements a novel scheduling algorithm that operates in constant time, regardless of the number of threads vying for the CPU. This is called the O(1) scheduler, denoting that the same amount of time is taken to schedule one thread as it is to schedule many. The O(1) scheduler also supports multiple processors (called Symmetric MultiProcessing, or SMP). You can find the process management sources in ./linux/kernel and architecture-dependent sources in ./linux/arch).

Another important resource that’s managed by the kernel is memory. For efficiency, given the way that the hardware manages virtual memory, memory is managed in what are called pages (4KB in size for most architectures). Linux includes the means to manage the available memory, as well as the hardware mechanisms for physical and virtual mappings.

But memory management is much more than managing 4KB buffers. Linux provides abstractions over 4KB buffers, such as the slab allocator. This memory management scheme uses 4KB buffers as its base, but then allocates structures from within, keeping track of which pages are full, partially used, and empty. This allows the scheme to dynamically grow and shrink based on the needs of the greater system.

Supporting multiple users of memory, there are times when the available memory can be exhausted. For this reason, pages can be moved out of memory and onto the disk. This process is called swapping because the pages are swapped from memory onto the hard disk. You can find the memory management sources in ./linux/mm.

The virtual file system (VFS) is an interesting aspect of the Linux kernel because it provides a common interface abstraction for file systems. The VFS provides a switching layer between the SCI and the file systems supported by the kernel (see Figure 4).

Figure 4. The VFS provides a switching fabric between users and file systems 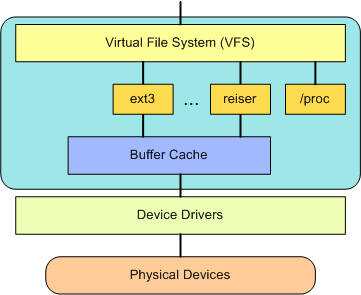 Below the file system layer is the buffer cache, which provides a common set of functions to the file system layer (independent of any particular file system). This caching layer optimizes access to the physical devices by keeping data around for a short time (or speculatively read ahead so that the data is available when needed). Below the buffer cache are the device drivers, which implement the interface for the particular physical device.

The network stack, by design, follows a layered architecture modeled after the protocols themselves. Recall that the Internet Protocol (IP) is the core network layer protocol that sits below the transport protocol (most commonly the Transmission Control Protocol, or TCP). Above TCP is the sockets layer, which is invoked through the SCI.

The vast majority of the source code in the Linux kernel exists in device drivers that make a particular hardware device usable. The Linux source tree provides a drivers subdirectory that is further divided by the various devices that are supported, such as Bluetooth, I2C, serial, and so on. You can find the device driver sources in ./linux/drivers.

Interesting features of the Linux kernel

If the portability and efficiency of the Linux kernel weren’t enough, it provides some other features that could not be classified in the previous decomposition.

Linux, being a production operating system and open source, is a great test bed for new protocols and advancements of those protocols. Linux supports a large number of networking protocols, including the typical TCP/IP, and also extension for high-speed networking (greater than 1 Gigabit Ethernet [GbE] and 10 GbE). Linux also supports protocols such as the Stream Control Transmission Protocol (SCTP), which provides many advanced features above TCP (as a replacement transport level protocol).

Linux is also a dynamic kernel, supporting the addition and removal of software components on the fly. These are called dynamically loadable kernel modules, and they can be inserted at boot when they’re needed (when a particular device is found requiring the module) or at any time by the user.

A recent advancement of Linux is its use as an operating system for other operating systems (called a hypervisor). Recently, a modification to the kernel was made called the Kernel-based Virtual Machine (KVM). This modification enabled a new interface to user space that allows other operating systems to run above the KVM-enabled kernel. In addition to running another instance of Linux, Microsoft® Windows® can also be virtualized. The only constraint is that the underlying processor must support the new virtualization instructions.

This article just scratched the surface of the Linux kernel architecture and its features and capabilities. You can check out the Documentation directory that’s provided in every Linux distribution for detailed information about the contents of the kernel.

IDC's Mary Johnston Turner discusses how to future-proof your infrastructure. From containers to automation, moving to a cloud-native environment along…