Introducing Knctl: A simpler way to work with Knative

Knctl is a command-line interface that makes interacting with Knative simple. Our aim is to make development and deployment workflows easier than using kubectl for…

Knative reduces the effort required to scale an application to the required capacity. It simplifies the ongoing deployment of new versions of an application, trivializes building source code by packaging it as an executable application within a container image, and advances event-driven application architectures.

To encourage adoption of Knative and aid early evaluators of this open source project, we both collaborated to create Knctl – a command-line interface (CLI) that makes interacting with Knative simple. Our aim is to make development and deployment workflows easier than using kubectl for managing Knative resources.

Knative goes a long way to help simplify the steps needed to use Kubernetes for deploying typical 12 factor applications. But it still requires developers to manipulate various YAML files through kubectl. While this workflow is usable, it is not as easy as it could be. More specifically, a Knative CLI would simplify developer experience and accelerate adoption of Knative.

With knctl, we tried to capture what we think a more streamlined Knative experience might look like. One of the interesting design points of knctl is that it doesn’t prevent direct Kubernetes resources use. Users can fall back to kubectl if necessary.

The following sections present an example deployment workflow. We start from a new Kubernetes cluster and deploy a sample application. Spin up a Kubernetes cluster (minimum required version is 1.10) on your favorite provider, and follow along.

Before installing Knative, make sure that your Kubernetes cluster is ready and you can communicate with it through kubectl. A good command to run is kubectl get nodes, which should list nodes in your cluster and their readiness. It look like the following example:

Next, install knctl by grabbing pre-built binaries from the Knctl releases page. On a MacOS X system, clicking on this link downloads the binary files into your home directory Download folder.

Use the knctl install command to install Knative Serving and Build (in this release knctl does not install Knative Eventing). (Here’s an ASCII cast of the installation procedure.) Depending on the size of your cluster (the available resources) and network latency, installing Knative can be complete in less than a minute, or it can take up to 5 minutes or so. (Note that we currently don’t recommend to use Minikube with Knative due to resource availability. However, if you are going to give it a try consider using knctl install --node-ports --exclude-monitoring instead.)

You can run a quick check to verify that your Knative installation is operational by listing the Istio ingresses that Knative configures. On a fresh installation, there should be one ingress created. It might take a little bit of time for your provider to provision a load balancer, therefore the Addresses column might not be populated immediately.

Before deploying a sample application, there are several Knative concepts you should be familiar with. Consider the following definitions and a diagram from Knative Docs: 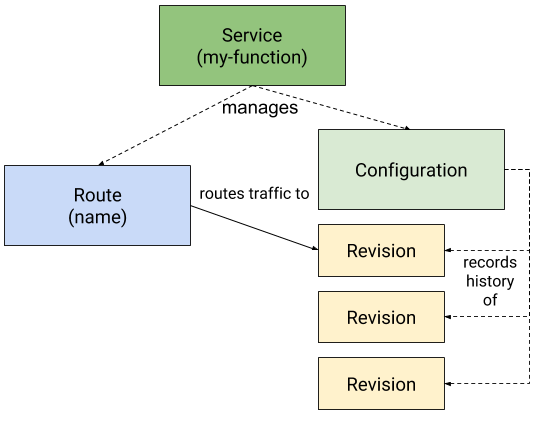 Now that you have a basic mental model of Knative resources, you can try deploying a sample application with the knctl deploy command. (Watch an ASCII cast of the entire workflow.)

This example uses a pre-built container image that includes the helloworld Go application. This application responds with Hello World: ${TARGET} content. Near the end of this workflow, additional documentation links demonstrate how to use the knctl deploy command with the local source code directory:

The service named hello is created, and now is visible in the list of services:

Ultimately, services are backed by pods, so check that at least one pod is in the “Running” state:

Because you originally configured your application with the TARGET=Max environment variable, this sample application includes Max in its response.

Note: Unless you have configured your DNS provider to point to the Knative ingress IP, you can’t use your browser to access your application. In the previous example, the curl command sends an explicit HTTP Host header when making a request. The HTTP Host header lets the ingress gateway decide which service you are trying to access.

You can also see logs emitted by the application. It happens to log a line when it starts, and when it receives requests. The knctl logs -f command continues following application logs, until you stop it with Ctrl+C.

Now that you deployed first version of our application, change a TARGET environment variable value so that you have a new version running:

By deploying the service again with the same name but different environment variable, Knative creates a revision of that service. Confirm the update by making another HTTP request. It might take a little bit of time for the change to take effect, as new pods start and traffic shifts.

To verify that you have multiple application versions, or revisions as they are called in Knative world, use the knctl revision list command:

You can delete any deployed service using the knctl service delete --service hello command. This command deletes the service and all of its revisions.

Here’s a summary of what you achieved:

You did all of these tasks without having to dig deep and understand how Knative manages custom Kubernetes resources!

Now that you looked at how to deploy a sample application from a container image through knctl and Knative, you might want to follow similar workflows. Check out the following links, and learn how to use knctl deploy to deploy local source code or how to use buildpacks:

After you finish experimenting with Knative, you can uninstall it with the knctl uninstall command. (See the ASCII cast of the uninstall procedure.) This task takes a few minutes. The Knative and Istio system namespaces are removed. However, any Knative resources that you have not deleted beforehand remain (such as hello service). You can also delete the Knctl executable with rm /usr/local/bin/knctl.

Our immediate next step for Knctl is to collect feedback about the CLI user experience. We would also love to hear your feedback on features that should be our next priority, for example Knative Eventing commands or support for traffic splitting. We are also working closely with the Knative community to push for wide adoption of Knctl, hopefully as the standard CLI for Knative.

Knctl streamlines application developer and deployment workflows for using Knative and Kubernetes by exposing a curated set of commands. Then developers can focus on their code, and rely on Knative to do application management behind the scenes.

In combination, Knctl – with Knative on top of Kubernetes – can be a powerful and friendly way to deploy your applications without losing access to raw Kubernetes APIs. If you’re interested in more advanced features, like deploying apps from source, splitting traffic across revisions, and connecting Knative services to databases, see Part 2 of our blog series about Knctl.

We welcome your feedback through our Github project and look forward to your pull requests. Our goal is to keep knctl in sync with releases of Knative and test it on various leading Kubernetes cluster providers.

Introducing Knctl: A simpler way to work with Knative, Part 2

Train an Anki Cozmo robot to recognize other toys