Develop a prototype for determining if actions are pure functions

The modular nature of OpenWhisk applications makes it easy to create unit tests for actions that are purely functional — meaning they have no side effects and do not rely on external state. In this tutorial, you’ll learn how to create these unit tests semi-automatically, and how to run the tests to verify that code changes do not break anything.

When using a Function as a Service (FaaS) framework such as OpenWhisk, any actions that are pure functions can have automatic QA applied using the methods you learn in this article.

What you’ll need to build your application

A usable application is likely to consist of multiple modules, each performing a specific action. In addition to testing the application as a whole, it is useful to test each module separately. This type of testing is called unit testing, and it lets you identify where bugs are located and fix them relatively easily.

One of the challenges of unit tests is that you need to identify possible inputs and their matching outputs to each module. If the module is simple, then this process can be trivial — but with more complicated modules, it can be more difficult. This is particularly true for modules that are embedded deep in the application and don’t have human-readable input or output.

In the case of actions that act as pure functions, you can identify the inputs and outputs automatically by seeing how they are called when the application is in use. Then, when a programmer changes the module, you can rerun it with the same inputs to see if the change broke anything.

The purpose of this tutorial is to show you the QA technique, so the sample application is very simple: a dictionary app that lets users choose a word in English and then provides the equivalent in other languages.

To learn how to write a user-facing application in OpenWhisk, read my tutorial, “Build a smart lock for a connected environment” (sections 1, 2, and 5). In contrast to that application, the app in this tutorial consists of three actions:

You create all three actions in OpenWhisk, and they are usually pure, but getTranslation can become impure if it gets a value in the error parameter.

After you create the actions, this is how you combine them into a sequence and make the sequence accessible from browsers:

Make the sequence accessible from the Internet

Follow these steps to make the sequence accessible from the Internet: 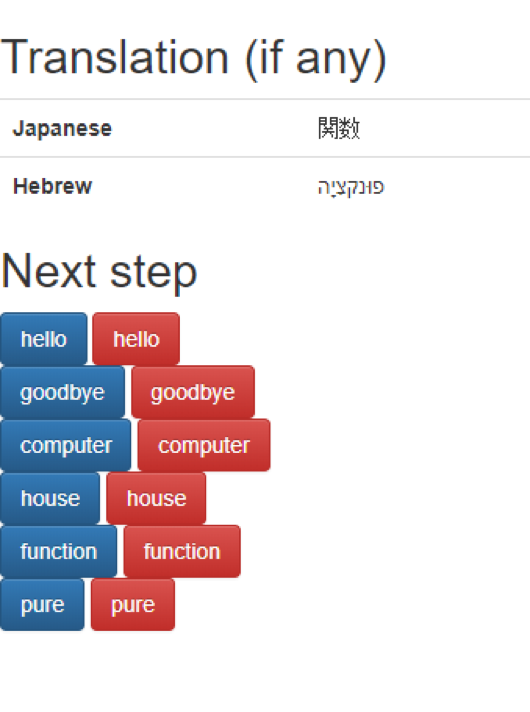 To create unit tests, you need to get inputs and matching outputs. The easiest way to do this is to edit the sequence to replace the existing action with a wrapper that calls the original action and stores its input and output.

Replace the action with a wrapper

To replace the action with a wrapper, you first need to be able to call the action remotely. You could add it to the API or make it a web action, but it is easier and safer to use the following method:

So how does it work?

These lines use the OpenWhisk NPM library to construct a connection to the server. The connection needs the hostname and the API key (which you need to provide — I am not telling you mine because then you’d be able to execute all my OpenWhisk actions without my permission).

Calling another OpenWhisk action can take a long time in computer terms, possibly even a whole second. To avoid being charged for a process for all that time, you need to create and return a Promise object. The object constructor has one parameter, the function you run to get the result. This function receives two parameters — one function to call in the case of success, and another function to call in the case of failure.

When the Promise function is called, it calls ow.actions.invoke to run the original OpenWhisk action. The name parameter is the path to the original action (you’ll need to replace it with your own value). If the invocation is called without blocking, it returns immediately with an ID that you can use to query the result later — but for this use case, it is better to block until you have an answer.

The invocation variable contains a Promise object. The then method gets the function inside the Promise called, and then calls the parameter function with the result.

Create and log (to show the value) a variable with the input and output:

Return the result to the OpenWhisk infrastructure that called the original Promise object.

In Figure 4, you see the logs from two separate invocations, one with empty input and one with a word in the input.

For the unit test data to be useful, it needs to be preserved in a Cloudant database. First, create such a database (named expected), as explained in this article, section 4a (the name of the service does not matter). Then replace callGetTranslation‘s code with the contents of this file. Remember to change the relevant parameters in lines 4 (OpenWhisk API key), 9-13 (Cloudant credentials), and 26 (path to the action).

Here I explain just the new parts, those having to do with the database.

Cloudant database entries (called documents) are accessible using a string. The index you’ll use is the input parameters.

Before you write an entry to the database, you should check if you’ve seen this input before.

If you try to get a document and fail, you will get an error with status code 404. In that case, write to the database and then call the callback.

If this input value is already in the database, compare the current output to the output in the database. If they are the same, that’s great. If they aren’t, then there is a problem. The action is not acting as a pure function, either because of a bug or because it wasn’t pure to begin with.

This sample code just reports the problem to the console. In a more realistic implementation, the code would instead log it to the issue tracking system for development and QA use.

Regardless of what else happens, you need to return the output value.

Integrate with the application

Note that if you look in the database you may see a lot of input parameters that you did not expect. This is because the first action in the sequence gets information about the HTTP request, and that is the action we trace in this example. These extra parameters don’t cause any problems.

Now that you have the information in the database, you can use it to run unit tests. Create a new action with this content. Put the correct identifiers in lines 4, 13, and 38. When you run this action, it returns the following fields:

Most of this action uses components that you used earlier in this article. The one exception is the async.map call. This function receives three parameters, a list and two functions. It then calls the first function (the iteratee) individually for every item in the list, like a normal map in functional programming. The difference is that the function called can be asynchronous. It gets two parameters: the item from the list and a callback function to call when the asynchronous process finishes. This allows you to use the map with an asynchronous function — for example, calling a different OpenWhisk action. A third parameter (which is optional but used here) is a function that’s called after the map is done.

The information is gathered in variables that are shared between the different calls to the iteratee. In some environments this would require you to worry about thread safety, but the single threaded nature of Node.js ensures that there won’t be two threads trying to change the variable at the same time.

Here is a sample result, shown on JSON formatter (to minimize the HTTP headers, which are not relevant): 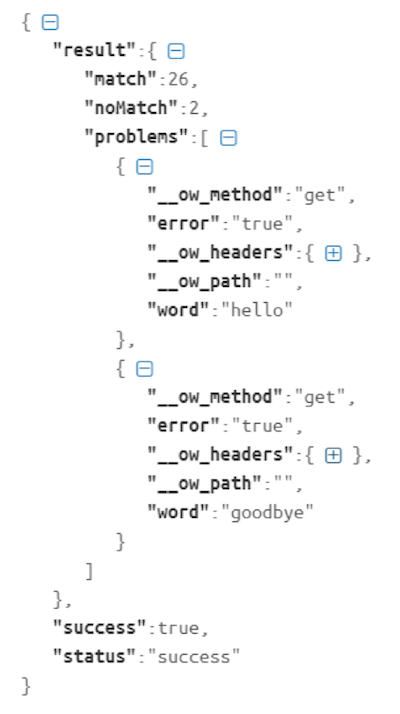 In this tutorial, you developed a prototype for determining whether actions that are supposed to be pure functions (with the same input always producing the same output, and no side effects) actually have at least one property of purity. Unfortunately, you cannot check a black box such as an OpenWhisk action for side effects. I made this prototype simple in order to explain the concepts as clearly as possible. If you want to put it to real use, you need to add a few other features.

These three features are relatively easy to implement while still treating the OpenWhisk action as a black box. A more challenging feature would be to proxy the connections between the action and other systems, such as Cloudant, to turn actions that aren’t pure functions into pure functions; you could do this by providing the same state information from other systems as the state provided during a previous call with the same input, and removing any side effects that the action tried to create.