Align your data for speed and correctness

Programmers are conditioned to think of memory as a simple array of bytes. Among C and its descendants, char* is ubiquitous as meaning “a block of memory”, and even Java™ has its byte[] type to represent raw memory.

The difference between how high-level programmers think of memory and how modern processors actually work with memory raises interesting issues that this article explores.

If you don’t understand and address alignment issues in your software, the following scenarios, in increasing order of severity, are all possible:

First examine what would happen on a processor with a one-byte memory access granularity:

This fits in with the naive programmer’s model of how memory works: it takes the same four memory accesses to read from address 0 as it does from address 1. Now see what would happen on a processor with two-byte granularity, like the original 68000:

However, notice what happens when reading from address 1. Because the address doesn’t fall evenly on the processor’s memory access boundary, the processor has extra work to do. Such an address is known as an unaligned address. Because address 1 is unaligned, a processor with two-byte granularity must perform an extra memory access, slowing down the operation.

Finally, examine what would happen on a processor with four-byte memory access granularity, like the 68030 or PowerPC® 601:

A processor with four-byte granularity can slurp up four bytes from an aligned address with one read. Also note that reading from an unaligned address doubles the access count.

Now that you understand the fundamentals behind aligned data access, you can explore some of the issues related to alignment.

A processor has to perform some tricks when instructed to access an unaligned address. Going back to the example of reading four bytes from address 1 on a processor with four-byte granularity, you can work out exactly what needs to be done: 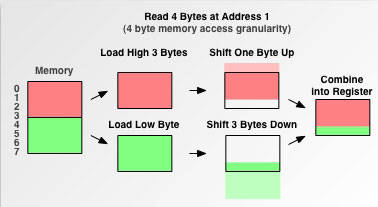 Some processors just aren’t willing to do all of that work for you.

The original 68000 was a processor with two-byte granularity and lacked the circuitry to cope with unaligned addresses. When presented with such an address, the processor would throw an exception. The original Mac OS didn’t take very kindly to this exception, and would usually demand the user restart the machine. Ouch.

Later processors in the 680×0 series, such as the 68020, lifted this restriction and performed the necessary work for you. This explains why some old software that works on the 68020 crashes on the 68000. It also explains why, way back when, some old Mac coders initialized pointers with odd addresses. On the original Mac, if the pointer was accessed without being reassigned to a valid address, the Mac would immediately drop into the debugger. Often they could then examine the calling chain stack and figure out where the mistake was.

All processors have a finite number of transistors to get work done. Adding unaligned address access support cuts into this “transistor budget.” These transistors could otherwise be used to make other portions of the processor work faster, or add new functionality altogether.

The PowerPC takes a hybrid approach. Every PowerPC processor to date has hardware support for unaligned 32-bit integer access. While you still pay a performance penalty for unaligned access, it tends to be small.

On the other hand, modern PowerPC processors lack hardware support for unaligned 64-bit floating-point access. When asked to load an unaligned floating-point number from memory, modern PowerPC processors will throw an exception and have the operating system perform the alignment chores in software. Performing alignment in software is much slower than performing it in hardware.

Writing some tests illustrates the performance penalties of unaligned memory access. The test is simple: you read, negate, and write back the numbers in a ten-megabyte buffer. These tests have two variables:

These tests were performed on a 800 MHz PowerBook G4. To help normalize performance fluctuations from interrupt processing, each test was run ten times, keeping the average of the runs. First up is the test that operates on a single byte at a time:

Listing 1. Munging data one byte at a time

It took an average of 67,364 microseconds to execute this function. Now modify it to work on two bytes at a time instead of one byte at a time — which will halve the number of memory accesses:

This function took 48,765 microseconds to process the same ten-megabyte buffer — 38% faster than Munge8. However, that buffer was aligned. If the buffer is unaligned, the time required increases to 66,385 microseconds — about a 27% speed penalty. The following chart illustrates the performance pattern of aligned memory accesses versus unaligned accesses: 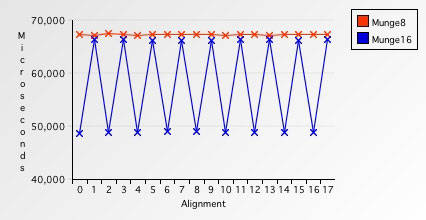 The first thing you notice is that accessing memory one byte at a time is uniformly slow. The second item of interest is that when accessing memory two bytes at a time, whenever the address is not evenly divisible by two, that 27% speed penalty rears its ugly head.

Now up the ante, and process the buffer four bytes at a time: 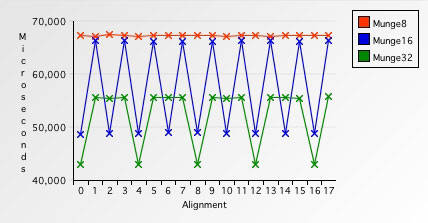 Now for the horror story: processing the buffer eight bytes at a time.

What happened? Because modern PowerPC processors lack hardware support for unaligned floating-point access, the processor throws an exception for each unaligned access. The operating system catches this exception and performs the alignment in software. Here’s a chart illustrating the penalty, and when it occurs: 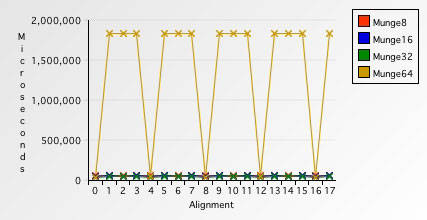 The penalties for one-, two- and four-byte unaligned access are dwarfed by the horrendous unaligned eight-byte penalty. Maybe this chart, removing the top (and thus the tremendous gulf between the two numbers), will be clearer: 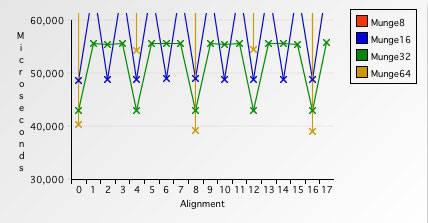 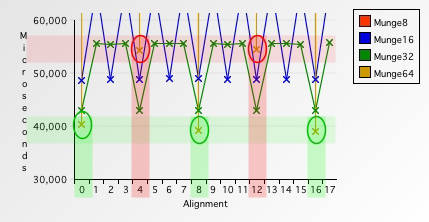 If an address is unaligned, it requires at least two memory accesses. But what happens if the desired data spans two pages of virtual memory? This could lead to a situation where the first page is resident while the last page is not. Upon access, in the middle of the instruction, a page fault would be generated, executing the virtual memory management swap-in code, destroying the atomicity of the instruction. To keep things simple and correct, both the 68K and PowerPC require that atomically manipulated addresses always be at least four-byte aligned.

Unfortunately, the PowerPC does not throw an exception when atomically storing to an unaligned address. Instead, the store simply always fails. This is bad because most atomic functions are written to retry upon a failed store, under the assumption they were preempted. These two circumstances combine to where your program will go into an infinite loop if you attempt to atomically store to an unaligned address. Oops.

Altivec is all about speed. Unaligned memory access slows down the processor and costs precious transistors. Thus, the Altivec engineers took a page from the MIPS playbook and simply don’t support unaligned memory access. Because Altivec works with sixteen-byte chunks at a time, all addresses passed to Altivec must be sixteen-byte aligned. What’s scary is what happens if your address is not aligned.

Altivec won’t throw an exception to warn you about the unaligned address. Instead, Altivec simply ignores the lower four bits of the address and charges ahead, operating on the wrong address. This means your program may silently corrupt memory or return incorrect results if you don’t explicitly make sure all your data is aligned.

There is an advantage to Altivec’s bit-stripping ways. Because you don’t need to explicitly truncate (align-down) an address, this behavior can save you an instruction or two when handing addresses to the processor.

This is not to say Altivec can’t process unaligned memory. You can find detailed instructions how to do so on the Altivec Programming Environments Manual (see resources on the right). It requires more work, but because memory is so slow compared to the processor, the overhead for such shenanigans is surprisingly low.

What is the size of this structure in bytes? Many programmers will answer “6 bytes.” It makes sense: one byte for a, four bytes for b and another byte for c. 1 + 4 + 1 equals 6. Here’s how it would lay out in memory:

However, if you were to ask your compiler to sizeof( Struct ), chances are the answer you’d get back would be greater than six, perhaps eight or even twenty-four. There’s two reasons for this: backwards compatibility and efficiency.

First, backwards compatibility. Remember the 68000 was a processor with two-byte memory access granularity, and would throw an exception upon encountering an odd address. If you were to read from or write to field b, you’d attempt to access an odd address. If a debugger weren’t installed, the old Mac OS would throw up a System Error dialog box with one button: Restart. Yikes!

So, instead of laying out your fields just the way you wrote them, the compiler padded the structure so that b and c would reside at even addresses:

Padding is the act of adding otherwise unused space to a structure to make fields line up in a desired way. Now, when the 68020 came out with built-in hardware support for unaligned memory access, this padding was unnecessary. However, it didn’t hurt anything, and it even helped a little in performance.

The second reason is efficiency. Nowadays, on PowerPC machines, two-byte alignment is nice, but four-byte or eight-byte is better. You probably don’t care anymore that the original 68000 choked on unaligned structures, but you probably care about potential 4,610% performance penalties, which can happen if a double field doesn’t sit aligned in a structure of your devising.

If you don’t understand and explicitly code for data alignment:

Thanks to Alex Rosenberg and Ian Ollmann for feedback, Matt Slot for his FastTimes timing library, and Duane Hayes for providing a bevy of testing machines.