Over the past few years, Angular has risen to popularity as a development framework for single-page web application development. Originally designed for JavaScript, Angular 4 builds on Angular 2 with support for additional languages like Dart and Typescript.

This tutorial introduces you to developing and loading feature modules in Angular. While the root module is sufficient for smaller apps, you will need to create feature modules for larger and more complex applications. You will also need to be able to load modules efficiently for optimal application performance.

Note that this tutorial is for developers familiar with basic web application development using Angular.

A single-page web application renders just one HTML page on startup. Along with that HTML page, the server sends an application engine to the client. The engine controls the entire application, including processing and loading HTML pages.

An Angular application consists of the following parts:

Feature modules are used to organize a larger application into blocks of functionality based on your business requirements. Each module contains the features and functionality it requires, and some modules are designed to be reusable.

Overview of an Angular application

About the example app

This tutorial takes you through the process of creating a medium-scale web application using Angular 4. The example application presents continuously updated information in four functional areas: Markets, Sports, Weather, and Currency. In addition to developing the feature module for each area, you will consider and implement three application loading techniques.

For the purpose of the tutorial, assume that application users will be most interested in getting updates about financial markets and sports. You’ll load those modules first, followed by the currency and weather modules.

In order to follow this tutorial, you will need two tools installed on your development machine:

Enter the command ng -v to find out which version of Angular CLI and Node you are currently using. As shown below, I’m using Node 7.9.0 and Angular CLI 1.0.2.

Get the application source code on GitHub

You should see the app successfully running in default port 4200, with a similar message to this one:

ng is the Angular CLI command you will use to build and serve the application code. Go to your Chrome browser and enter the URL http://localhost:4200. You should see the app running. If you click the Home icon, you will see the functional area for Markets: 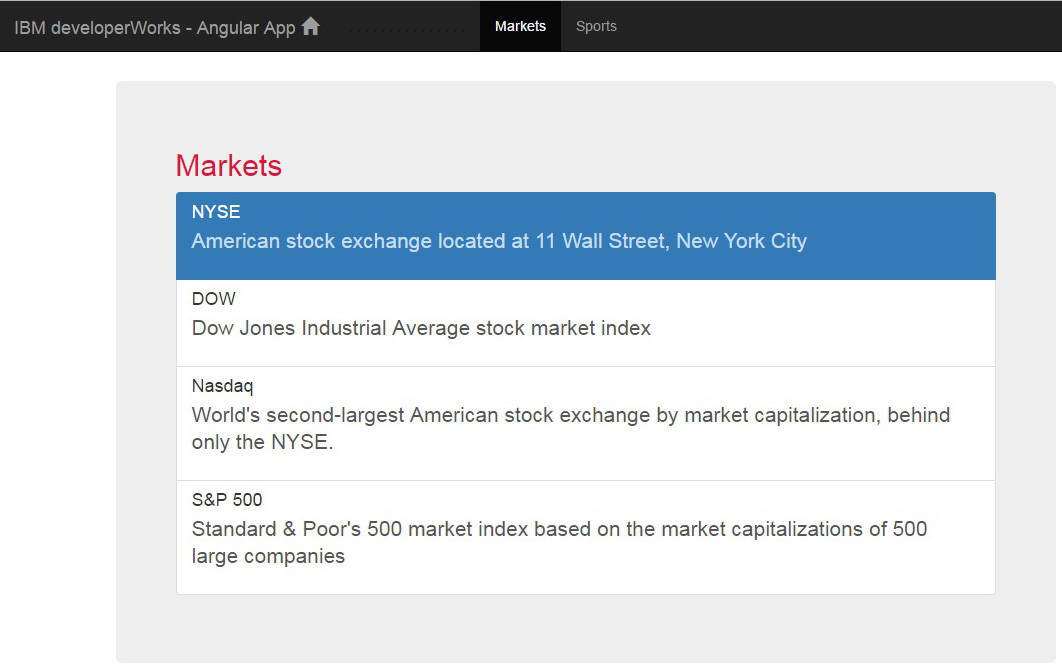 If you click Sports, you’ll see the functional area for Sports: 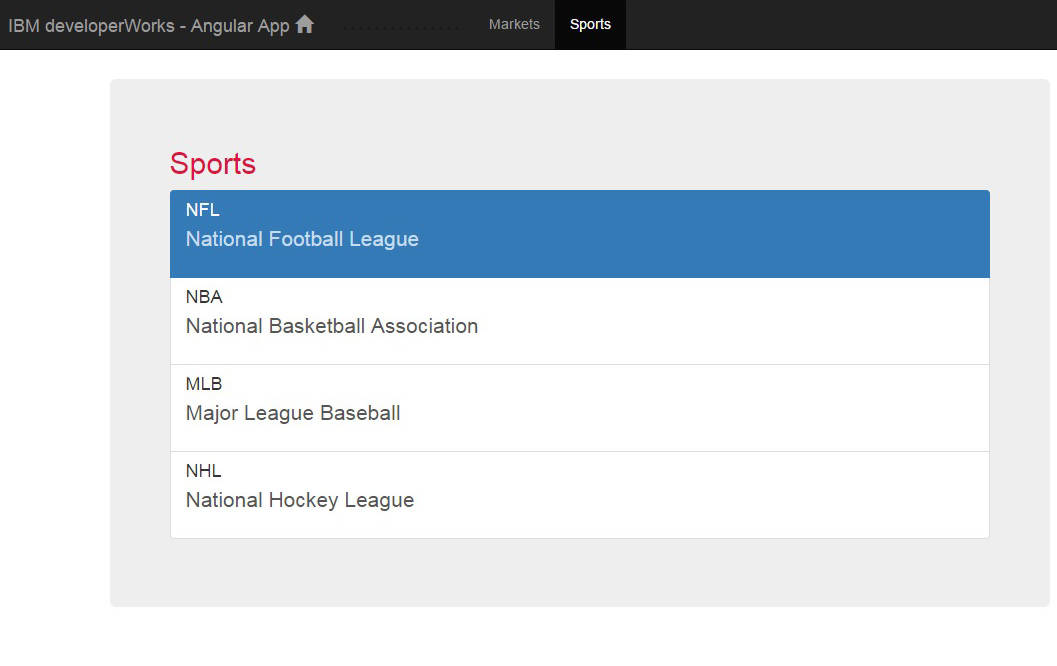 Now go to the application code in the fm/src/app directory. Here’s a snapshot of the directory: 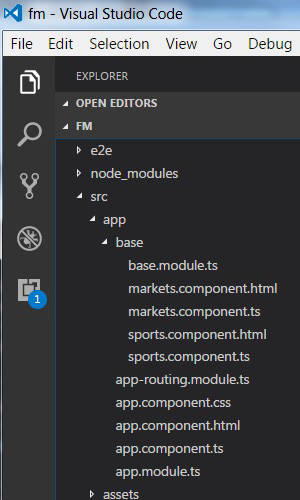 Figure 5. Routes in the main app 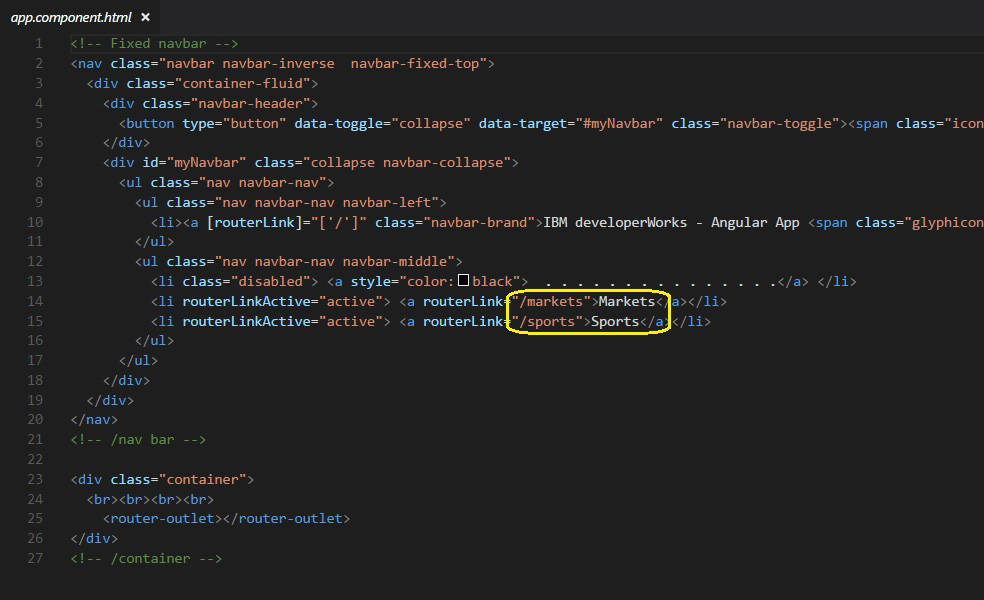 Open the file app-routing.module.ts, shown below. 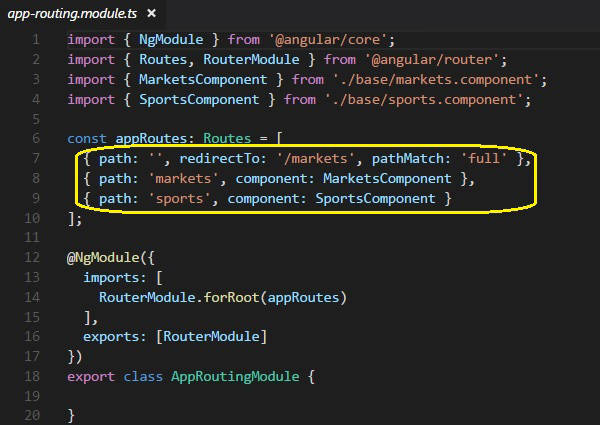 MarketComponent and SportsComponent are called when the /markets and /sports routes are invoked. If no route is specified, the first item in the array redirects to the /markets route.

To confirm the application function so far, go back to http://localhost:4200 in your browser. On a Windows machine, tap Fn+F12. On a Mac, enter Command->Option->i. Now you should see the Chrome developer tools GUI. View the Sources/top/ng:// section, then reload the URL. As shown in Figure 7, you should see AppModule and BaseModule automatically loaded when you restart the app. 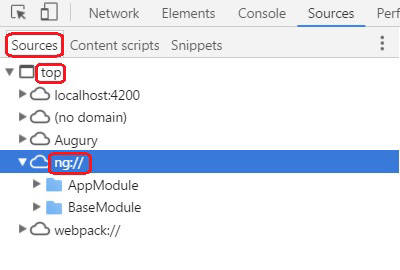 Let’s assume multiple teams are developing modules for this application. Your offshore team has just delivered the Weather and Currency modules. Your task is to merge the new modules into the main app.

Unzip the Angular4LazyLoadModules file (in Angular4TutorialSrc.zip) from the application source code. Copy the weather and currency folders into your main app directory, as shown below.

Your next task is to instruct Angular to implement lazy loading for the Weather and Currency modules. To add the new modules to your base application, edit your app-routing.module.ts as shown below:

Listing 1. A section of the original app-routing.module.ts

Listing 2. A section of the updated app-routing.module.ts

The updated code instructs Angular to load the secondary modules only upon user request. Note that the weather module’s loadChildren property is set to WeatherModule‘s address. The address is the file location for WeatherModule (relative to the app root), followed by # separator, followed by the name of the exported module class, WeatherModule. The configuration for the Currency module is exactly the same.

When the router navigates to the updated address, it will use the loadChildren string to dynamically load WeatherModule or CurrencyModule. The first time one of the new routes is requested, the module will be lazy loaded and the application routes re-configured. The route will then be immediately available for subsequent requests.

Next, you will update the user interface. Find the file app.component.html in your application directory and place your cursor under the following statement:

Listing 3. A section of the original app.component.html

Insert the following code below the statement:

Listing 4. A section of the updated app.component.html

Now the user will see and be able to click the new menus for the Weather and Sports application areas. Note that Weather has three submenus.

Save the file contents, then issue the command ng serve to run the app.

Figure 9. The app is running

Now examine the application output following the ng serve command. You should see two new lines for “chunk” files, which have been automatically added by angular-cli. These represent the modules you are lazy loading.

The app in your browser should now include the Weather and Currency menus, as shown in Figure 10.

Figure 10. Weather and Currency menus in the top-right corner 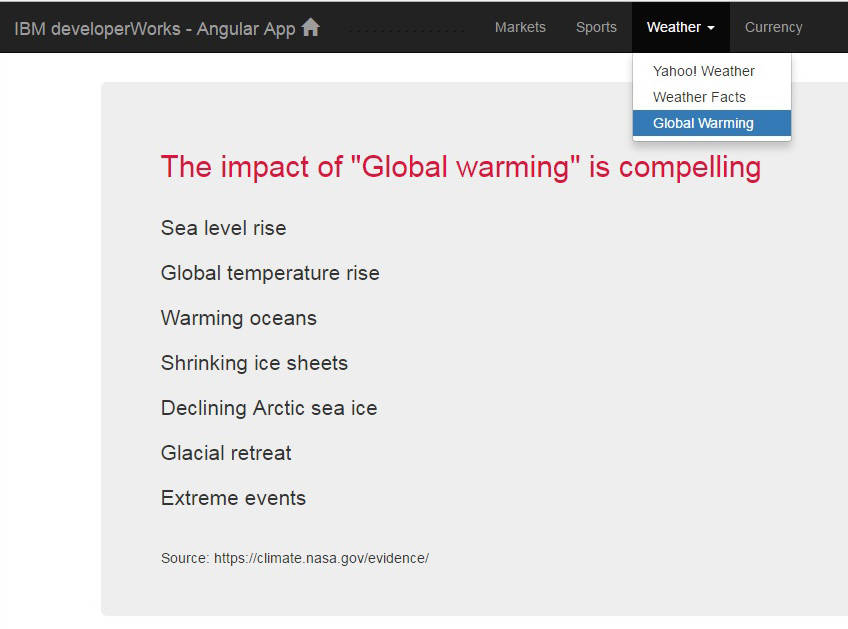 Before we move on, let’s consider the details of this loading mechanism. Start by running the app in your Chrome browser. On a Windows machine, tap Fn+F12. On a Mac, enter Command->alt->i. Click the Network tab and wait for the page to load. Before you click the Weather or Currency links, look at Figure 11 (column 1) and Figure 12 (column 1) below. 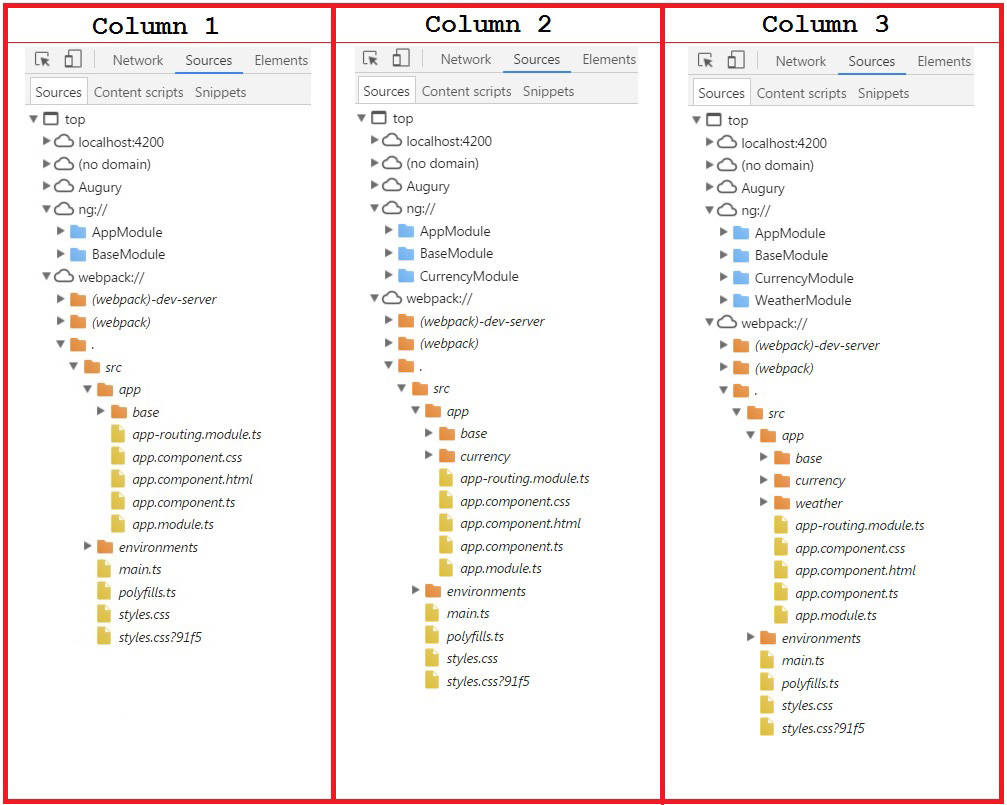 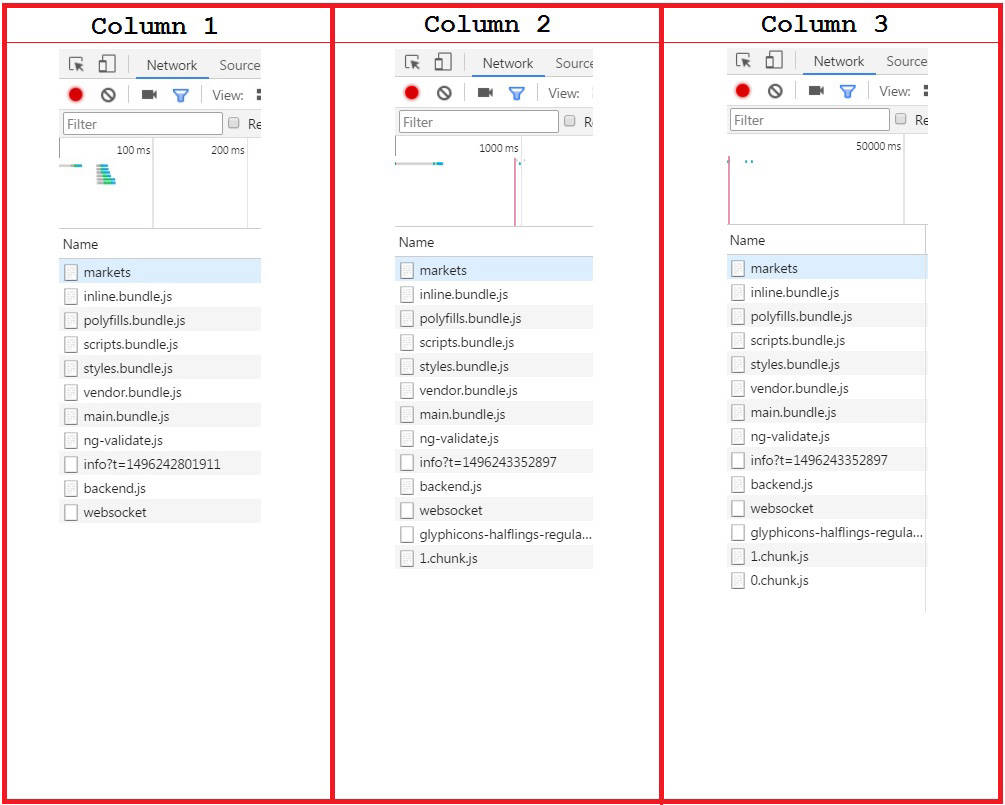 These figures show the eager-loaded modules, AppModule and BaseModule. You can see that the Weather and Currency modules are not yet loaded.

Now try clicking the Currency menu and look at the Sources and Network tabs in Figure 11 (column 2) and Figure 12 (column 2). You should see that the Currency module (module(y.chunk.js)) has loaded. However, the Weather module has not yet loaded. Click Weather, then click one of the items under the Weather submenu. Referring to Figure 11 (column 3) and Figure 12 (column 3), you should now see that the Weather module (module(x.chunk.js)) has also loaded.

Note that the x and y chunks each have an integer value; that is how the lazy loading mechanism knows to load the modules.

Rather than waiting for the user to invoke the route for a secondary module, it’s sometimes more efficient to preload these modules. In this case, after your primary modules have been eagerly loaded, the router begins preloading all remaining modules marked with the loadChildren property.

To reconfigure the app for preloading, edit your app-routing.module.ts as shown below. The following code imports the preloading modules and invokes their functionality.

Listing 5. A section of the original app-routing.module.ts

Listing 6. A section of the updated app-routing.module.ts

Listing 7. A section of the original app-routing.module.ts

Listing 8. A section of the updated app-routing.module.ts

Save the updated files, then run the app. Reload the app in your Chrome browser, then go to the Chrome developer tools Network and Sources tabs. The x.chunk.js and y.chunk.js files should be loaded immediately after the main application, making the secondary modules available before the user clicks these menus. See the sample application in Angular4PreLoadModules.zip for a more detailed look at preloading.

Customize preloading: In a large application, it could make sense to preload only a few of your lazy-loaded modules. See the Angular documentation for routing and navigation to learn how to customize your preloading configuration.

I want to thank the wonderful IBMers John Petri, David Stanich, Mark Shade, Dean P. Cummings, and Don Turner for their review and support in writing this tutorial.