Apache Cassandra is a proven fault-tolerant and scalable decentralized NoSQL database for today’s applications. You can deploy Cassandra on Docker containers or manage Cassandra through Kubernetes.

In this tutorial, you will learn how to set up a Cassandra cluster that spans multiple data centers (all geographically miles apart) with Kubernetes. The data centers could be in different countries or regions. Some reasons to use this setup are:

To complete the steps in this tutorial, you will use the Kubernetes concepts of pod, StatefulSet, headless service, and PersistentVolume. Here’s what you need:

Figure 1. One Cassandra cluster spread across two data centers with five nodes in each data center 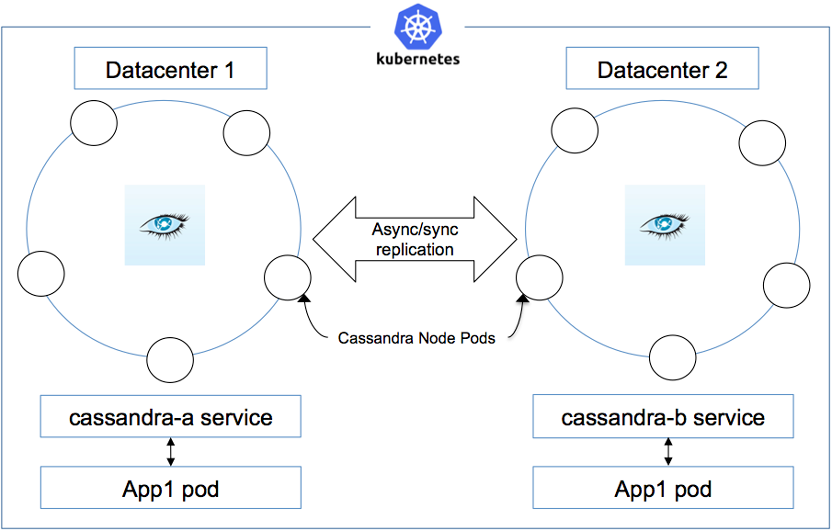 Label the nodes by data center

All code used in this tutorial is available on GitHub. Clone the repository or copy the YAML files from there.

First, create a new namespace where you will do all the work.

Then create all six PersistentVolumes using the YAML file provided in GitHub. You can adjust the capacity and location of the directory in this file as needed.

StatefulSet is a powerful construct in Kubernetes. To understand how the pod deployment and networking works, you need to understand some of its essential conventions.

There are further details in the StatefulSet related to the Cassandra configuration done through environment variables exposed by the specific Cassandra Docker image. One important aspect is the specification of Cassandra seeds. It is recommended that at least one seed node is specified from each data center. So the very first pod in each data center is specified as a seed node. Note the fully qualified node name of the seed nodes. Another notable difference is the data center specification; StatefulSet cassandra-a is in DC1, and StatefulSet cassandra-b is in the DC2 data center.

Now it is time to create the two StatefulSets and make sure they are created successfully:

In this tutorial, one replica is specified in each of the StatefulSet definitions, so for each StatefulSet, there will be only one pod created in each data center. These pods will be named cassandra-a-0 and cassandra-b-0. Just list the pods to confirm:

If the pods are successful and they are in the running state, check Cassandra’s nodetool status. You should see one node from each data center:

If either of the two seed node containers are in error, check the logs to find out what is wrong. You can obtain the cassandra-a-0 logs with kubectl -n c7a logs cassandra-a-0.

So far, only one Cassandra node has been created in each data center. Now it is time to scale the pods using StatefulSet. Set the replica count to three for each StatefulSet:

Each of the StatefulSets are now scaled to have three replicas. You can have more replicas, but you need to make sure you have provisioned persistent volumes accordingly, in advance.

Within a few minutes, the rest of the pods are up and running and have joined the Cassandra cluster. Verify the status of all the Cassandra nodes using this nodetool utility:

The output above shows that the six nodes, three in each data center, are up and running.

The code above shows that a Cassandra shell session (cqlsh) has been started on cassandra-a-0 node. Then a keyspace named hr_keyspace is created. When the keyspace is created, it is required to specify the replication strategy. The replication strategy of NetworkTopologyStrategy is typically used when multiple data centers are involved. There is an option to specify how many replicas are needed in each data center. In the example above, there are two replicas specified for data center DC1 and two replicas for data center DC2.

Next, create a table and add some data:

Now try to retrieve that data from any node.

This deletes StatefulSet cassandra-a and all of its pods. Now, there are only three Cassandra pods remaining, all from data center DC2. Connect to any of those and try to retrieve data:

This shows that the data is still available from other data center nodes. Note that the above example above shows a connection to the Cassandra node directly. But in actuality, the applications using Cassandra will connect it through the headless service created for it, as shown in Figure 1 above.

To delete everything on the Kubernetes cluster in the c7a namespace, use this command:

In this tutorial, you saw how to set up a multi-data center Cassandra cluster on a Kubernetes platform. This setup is useful to perform live backups and to protect from site or data center failures. The site location-aware access to a Cassandra cluster also reduces read and write latency.