Learn how to enhance your clusters with YARN's scalability, efficiency, and flexibility

Apache Hadoop 2.0 includes YARN, which separates the resource management and processing components. The YARN-based architecture is not constrained to MapReduce. This article describes YARN and its advantages over the previous distributed processing layer in Hadoop. Learn how to enhance your clusters with YARN’s scalability, efficiency, and flexibility.

Apache Hadoop in a nutshell

Apache Hadoop is an open source software framework that can be installed on a cluster of commodity machines so the machines can communicate and work together to store and process large amounts of data in a highly distributed manner. Initially, Hadoop consisted of two main components: a Hadoop Distributed File System (HDFS) and a distributed computing engine that lets you implement and run programs as MapReduce jobs.

MapReduce, a simple programming model popularized by Google, is useful for processing large datasets in a highly parallel and scalable way. MapReduce is inspired by functional programming whereby users express their computation as map and reduce functions that process data as key-value pairs. Hadoop provides a high-level API for implementing custom map and reduce functions in various languages.

Hadoop also provides the software infrastructure for running MapReduce jobs as a series of map and reduce tasks. Map tasks invoke map functions over subsets of input data. After they are done, reduce tasks start calling reduce functions on the intermediate data, generated by map functions, to produce the final output. Map and reduce tasks run in isolation from one another, which allows for a parallel and fault-tolerant computation.

Most importantly, the Hadoop infrastructure takes care of all complex aspects of distributed processing: parallelization, scheduling, resource management, inter-machine communication, handling software and hardware failures, and more. Thanks to this clean abstraction, implementing distributed applications that process terabytes of data on hundreds (or even thousands) of machines has never been so easy — even for developers with no previous experience with distributed systems.

Although there were several open source implementations of the MapReduce model, Hadoop MapReduce quickly became the most popular. Hadoop is also one of the most exciting open source projects on the planet, thanks to several great features: a high-level API, near-linear scalability, an open source licence, the ability to run on commodity hardware, and fault tolerance. It has been successfully deployed by hundreds (maybe thousands) of companies and is the current standard for large-scale distributed storage and processing.

Some early Hadoop adopters, such as Yahoo! and Facebook, have built large clusters in the range of 4,000 nodes to satisfy their constantly growing and varying data processing needs. After they built their cluster, though, they started noticing limitations of the Hadoop MapReduce framework.

The most serious limitations of classical MapReduce are primarily related to scalability, resource utilization, and the support of workloads different from MapReduce. In the MapReduce framework, the job execution is controlled by two types of processes:

The large Hadoop clusters revealed a limitation involving a scalability bottleneck caused by having a single JobTracker. According to Yahoo!, the practical limits of such a design are reached with a cluster of 5,000 nodes and 40,000 tasks running concurrently. Due to this limitation, smaller and less-powerful clusters had to be created and maintained.

Moreover, both smaller and larger Hadoop clusters had never used their computational resources with optimum efficiency. In Hadoop MapReduce, the computational resources on each slave node are divided by a cluster administrator into a fixed number of map and reduce slots, which are not fungible. With the number of map and reduce slots set, a node cannot run more map tasks than map slots at any given moment, even if no reduce tasks are running. It harms the cluster utilization because when all map slots are taken (and we still want more), we cannot use any reduce slots, even if they are available, or vice versa.

Last, but not least, Hadoop was designed to run MapReduce jobs only. With the advent of alternative programming models (such as graph processing provided by Apache Giraph), there was an increasing need to support programming paradigms besides MapReduce that could run on the same cluster and share resources in an efficient and fair manner.

In 2010, engineers at Yahoo! began working on a completely new architecture of Hadoop that addresses all the limitations above and multiple additional features.

In Hadoop MapReduce, the JobTracker is charged with two distinct responsibilities:

The large number of responsibilities given to a single process caused significant scalability issues, especially on a larger cluster where the JobTracker had to constantly keep track of thousands of TaskTrackers, hundreds of jobs, and tens of thousands of map and reduce tasks. The image below illustrates the issue. On the contrary, the TaskTrackers usually run only a dozen or so tasks, which were assigned to them by the hard-working JobTracker. 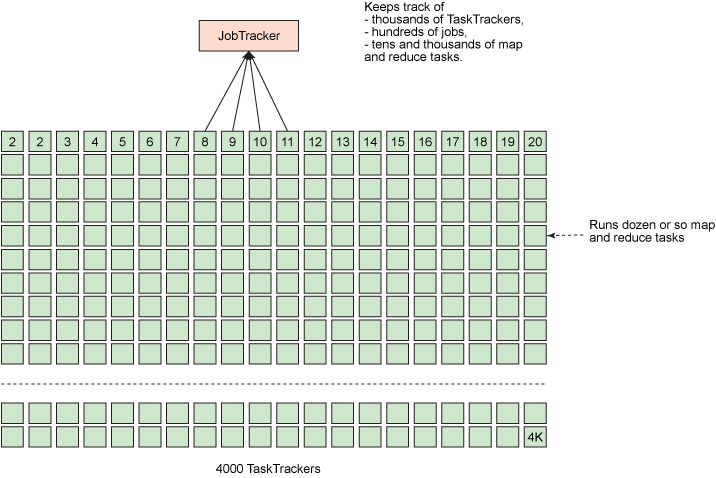 To address the scalability issue, a simple but brilliant idea was proposed: Let’s somehow reduce the responsibilities of the single JobTracker and delegate some of them to the TaskTrackers since there are many of them in a cluster. This concept was reflected in a new design by separating dual responsibilities of the JobTracker (cluster resource management and task coordination) into two distinct types of processes.

Instead of having a single JobTracker, a new approach introduces a cluster manager with the sole responsibility of tracking live nodes and available resources in the cluster and assigning them to the tasks. For each job submitted to a cluster, a dedicated and short-living JobTracker is started to control the execution of tasks within that job only. Interestingly, the short-living JobTrackers are started by the TaskTrackers running on slave nodes. Thus, the coordination of a job’s life cycle is spread across all of the available machines in the cluster. Thanks to this behavior, more jobs can run in parallel and scalability is dramatically increased.

YARN: The next generation of Hadoop’s compute platform

Let’s slightly change the terminology now. The following name changes give a bit of insight into the design of YARN:

YARN is the next generation of Hadoop’s compute platform, as shown below.

In the YARN architecture, a global ResourceManager runs as a master daemon, usually on a dedicated machine, that arbitrates the available cluster resources among various competing applications. The ResourceManager tracks how many live nodes and resources are available on the cluster and coordinates what applications submitted by users should get these resources and when. The ResourceManager is the single process that has this information so it can make its allocation (or rather, scheduling) decisions in a shared, secure, and multi-tenant manner (for instance, according to an application priority, a queue capacity, ACLs, data locality, etc.).

When a user submits an application, an instance of a lightweight process called the ApplicationMaster is started to coordinate the execution of all tasks within the application. This includes monitoring tasks, restarting failed tasks, speculatively running slow tasks, and calculating total values of application counters. These responsibilities were previously assigned to the single JobTracker for all jobs. The ApplicationMaster and tasks that belong to its application run in resource containers controlled by the NodeManagers.

The NodeManager is a more generic and efficient version of the TaskTracker. Instead of having a fixed number of map and reduce slots, the NodeManager has a number of dynamically created resource containers. The size of a container depends upon the amount of resources it contains, such as memory, CPU, disk, and network IO. Currently, only memory and CPU (YARN-3) are supported. cgroups might be used to control disk and network IO in the future. The number of containers on a node is a product of configuration parameters and the total amount of node resources (such as total CPUs and total memory) outside the resources dedicated to the slave daemons and the OS.

In YARN, MapReduce is simply degraded to a role of a distributed application (but still a very popular and useful one) and is now called MRv2. MRv2 is simply the re-implementation of the classical MapReduce engine, now called MRv1, that runs on top of YARN.

One cluster that can run any distributed application

Thanks to this generic approach, the dream of a Hadoop YARN cluster running many various workloads comes true. Imagine: a single Hadoop cluster in your data center that can run MapReduce, Giraph, Storm, Spark, Tez/Impala, MPI, and more.

The single-cluster approach obviously provides a number of advantages, including:

This section discusses how the ResourceManager, ApplicationMaster, NodeManagers, and containers interact together when an application is submitted to a YARN cluster. The image below shows an example. 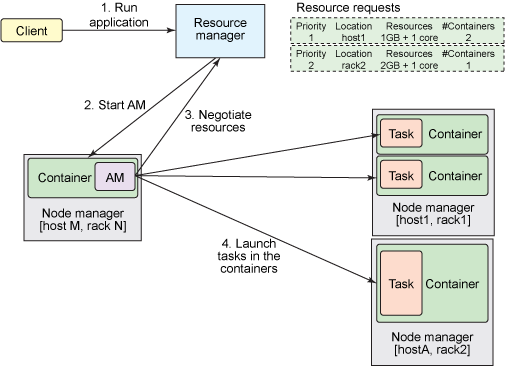 If and when it is possible, the ResourceManager grants a container (expressed as container ID and hostname) that satisfies the requirements requested by the ApplicationMaster in the resource request. A container allows an application to use a given amount of resources on a specific host. After a container is granted, the ApplicationMaster will ask the NodeManager (that manages the host on which the container was allocated) to use these resources to launch an application-specific task. This task can be any process written in any framework (such as a MapReduce task or a Giraph task). The NodeManager does not monitor tasks; it only monitors the resource usage in the containers and, for example, it kills a container if it consumes more memory than initially allocated.

YARN offers several other great features. Describing all of them is outside the scope of this article, but I’ve included some noteworthy features:

YARN is a completely rewritten architecture of Hadoop cluster. It seems to be a game-changer for the way distributed applications are implemented and executed on a cluster of commodity machines.

YARN offers clear advantages in scalability, efficiency, and flexibility compared to the classical MapReduce engine in the first version of Hadoop. Both small and large Hadoop clusters greatly benefit from YARN. To the end user (a developer, not an administrator), the changes are almost invisible because it’s possible to run unmodified MapReduce jobs using the same MapReduce API and CLI.

There is no reason not to migrate from MRv1 to YARN. The biggest Hadoop vendors agree on that point and offer extensive support for running Hadoop YARN. Today, YARN is successfully used in production by many companies, such as Yahoo!, eBay, Spotify, Xing, Allegro, and more.

I would like to thank Piotr Krewski and Fabian Alenius for their technical review of this article.