Throughout 2014 and into 2015, microservice became the hot new buzzword, quickly supplanting cloud. This tutorial introduces microservices and explains what it means to build on a microservice architecture.

Throughout this article, I’ll cover the foundations of microservices so you can gain an understanding of how to represent your own microservice-based architecture. I will rely heavily on Martin Fowler’s blog post, as I try to capture the essence of that post, its application to your environments today, and how to get there.

Starting in 2009 — driven completely by APIs and riding the initial wave of what we would come to know as microservices — Netflix completely redefined its application development and operations models. At the time, the rest of the technology landscape was littered with Enterprise-scale monoliths, however, Netflix doubled down their effort to build more manageable, more scalable, and more resilient distributed systems.

For a comparison of microservices, SOA, and APIs, read this tutorial.

The Netflix definition of microservices is “fine-grained SOA (service-oriented architecture)”. You don’t need to be intimately familiar with SOA (an architecture style coined more than a decade ago), just the terms used in the acronym. Ideally, you are building an entire architecture out of services from day one. In microservices, each of these services has a single solitary purpose with no side effects, enabling you to cover greater scale with fewer overall dedicated engineers.

In essence, microservices and microservices-based architectures are many smaller architectural components, built and delivered faster, becoming stronger, both independently and as a whole.

The migration from mainframes to client/server architectures was a large step and one that many companies and developers alike struggled with. The more recent migration from core web-based application servers to SOA adoption was a similar struggle. Many components included in application servers of years past lend themselves to microservices; however, they are still packed inside multi-gigabyte installation binaries. The next figure, for example, shows the architecture of a traditional web application architecture, deployed using WebSphere Application Server and Java Enterprise Edition components.

Image is used with permission from O’Reilly from the IBM WebSphere Application Server 8.0 Administration Guide 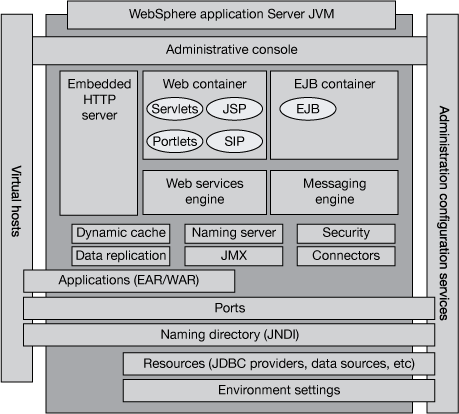 Microservices are an exercise in integration with all interacting components being much more loosely coupled. The entire idea of microservices becomes plug and play. I will touch on this more in the Stronger section, but essentially a microservices-based system employs the shotgun method at scale, to maintain and secure more small components instead of fewer large components. You remove single points of failure and distribute those points of failure everywhere.

The diagram in the following figure is one example of an implementation that uses microservices. It is a conceptual routing example of a video-streaming application. 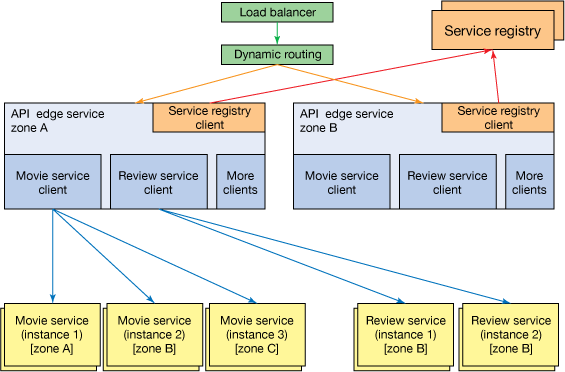 In that previous figure, each individual box is maintained on its own, scales on its own, knows where it sits, and knows where to get the information it needs. Not every microservice architecture requires every component in this diagram, but they do help!

Comparing Figures 1 and 2, you can see the difference in how a similar application would be deployed. In Figure 1, everything is deployed to a single process on a vertically scaled system. When more throughput is required, the entire server stack is stamped out again and again. Each server runs inside its own process. The only way to get more throughput in Figure 1’s Web Services Engine or EJB Container would be to scale the entire Server JVM to a new instance inside of a clustered environment. However, this would also create another Web Container, another Embedded HTTP Server, another Messaging Engine, and so on, whether or not those components need to be scaled.

In contrast to Figure 1’s type of scale, Figure 2 has components that scale independently. I’ll touch on the individual components and how they scale in the Faster section, but for now focus on the distributed nature of each component and service. Unlike in the example application in Figure 1 — which requires the full highly available web application server stack to provide availability — these components are distributed by nature and only provide a single, focused capability, often using different technology from other components. This structure enables the application architecture to evolve much faster and include newer technologies, as well as newer releases, independently of the other components.

To summarize, smaller is better to develop, operate, maintain, and interact with.

Read this guide to learn more about what is DevOps.

Another buzzword that surfaced along with cloud is DevOps. The DevOps movement empowers developers to control more of their code along the delivery pipeline, integrate continuously, and achieve more visibility. The main phases of the DevOps lifecycle are comprised of the following: planning, development, integration, deployment, operations, and learning. These are all done in a continuous fashion and map perfectly to our goals of speed and size.

What could be better than delivering smaller pieces faster, right? There’s no way you can deliver updates to a monolithic application server instance every two weeks, but in that same time frame you can definitely deliver updates to a single service consumed by many other services. Less overhead is incurred by smaller components when you build new staging environments, move items through your pipelines, and deliver to production environments.

Don’t get me wrong. Continuous delivery and integration can still be done with monoliths. I’ve seen it happen. However, then you’re juggling boulders, not marbles. It’s much easier to recover from dropping a marble than from dropping a boulder.

The other aspect of faster relates to execution. Microservices are built on the notion that if you need to go faster, just throw more resources at it. A manager’s dream! By building every service to be independently scalable, you allow for interaction among components to take advantage of a pool of resources instead of single component interfaces.

Returning to the previous example, in Figure 2 you see Service Registry servers and clients. This capability is critical in a microservices-based application. In this example, the edge services contain Movie Service and Review Service references. Based on load, these services scale at different rates; therefore you can no longer manage them all the same way at the same scale.

As the Movie Services scale, the Service Registry automatically knows about the new service instances that get created. When an Edge Service tries to handle a request, it makes a call to the Service Registry and gets client references for all the services it depends on. The Movie Service client reference is more likely a new one that has been created fairly recently, whereas an old instance of the Review Service previously used could be returned. This Service Registry capability allows your microservices to truly function as “one of many,” with a loosely coupled dependency between your components, but a highly reliable capability to get more copies of a component when needed.

The following figure shows the same conceptual architecture for the video-streaming application in Figure 2, with the addition of scaled-out microservices for the Movie Service.

Efficiently scaling as needed, with systems that are self-aware of new instances. It’s what makes applications built on microservice architectures that much stronger.

Not all systems are meant to be long-lived. They are created when needed and removed when they no longer serve a purpose. As I mentioned before, this removes single points of failure by distributing those points throughout the system, knowing that you need mechanisms to account for services and instances that are unavailable or performing poorly.

Creating microservices leads to creating services that are many of one, as well as one of many. No longer do we count service instances on one hand or manage long-term instances and worry about maintaining state, storage, system modifications, and so on. Don’t get me wrong — we are still very much interested in performance tuning and configuration, but these things now happen much earlier in the development cycle instead of in staging or production. This approach gives us many services, and many instances of each service.

To validate this pillar of strength, in its journey, Netflix began harnessing chaos — a Chaos Monkey to be exact. The Chaos Monkey is a cloud application component that Netflix uses to introduce systematic chaos into application operations.

This capability would go through the infrastructure and purposefully turn off services and service instances that were critical to production. Why would Netflix do this? How could it do this and survive?

First, the why. It’s a way of making it easy to identify where you need to fail fast. Are new services too slow? Do they need to scale more efficiently? What happens when an external service provider goes down, not just internal services? All of these things need to be accounted for in a microservices architecture.

Second, the how. Netflix can survive thanks to the shotgun method I mentioned earlier. The idea is simple: Provision enough service instances that 99.9999 percent of requests will complete successfully. Any failed requests will work on a retry. Pull the plug on a service instance, and another local one will take its place. Pull the plug on an entire service, and your system should compensate or reroute users to other availability zones or regions with that specific service. If nothing else is available, the user or request should fail fast and not wait to time out.

Netflix expanded the Chaos Monkey concept and released the capability as Simian Army, to include Chaos Monkeys, Janitor Monkeys, Conformity Monkeys, and Latency Monkeys — cloud application components that introduce specific chaos into operations, including latency and compliance issues. The Simian Army project has since been deprecated, as Netflix moved its capability to other service components, as each area of chaos testing proved itself invaluable along the way.

As you can see, Netflix (and other companies adopting microservices) subscribes to the idea that what kills your application makes it stronger.

In the end, the main benefits for using microservices are:

I’d like to thank Jonathan Bond for his presentation, which allowed me to capture and orient my thoughts and also borrow a few images (Figures 2 and 3).

Error detection and handling with Redis

Improve performance and efficiency in your Red Hat OpenShift deployments