How to implement a Letter of Credit solution

Note: IBM Blockchain Platform now utilizes Hyperledger Fabric for end-to-end development. Users may use Hyperledger Composer at their choice, but IBM will not provide support for it.

This is Part 3 in our tutorial series on using blockchain technology with IBM Business Process Manager. Blockchain is a shared, immutable ledger for recording the history of business transactions. It ushers in a new generation of transactional applications that establish trust, accountability, and transparency in the exchange of physical or digital assets.

Part 1 showed how the combination of business process management (BPM) and blockchain technology simplifies distributed, collaborative processes between multiple enterprises. A shared ledger is used by all the participants, and smart contracts govern transactions. Rather than individually storing relevant data in individual information systems and synchronizing between parties bilaterally, the single shared ledger instance is updated, and its information becomes visible to all participants (based on their authorization).

Get a monthly roundup of the best free tools, training, and community resources to help you put blockchain to work.
Current issue | Subscribe

In Part 2, we went beyond mere data sharing through blockchain. We explored blockchain’s “active behavior”: its capability to notify participants about the successful completion of a transaction, by sending events.

Overview of this tutorial

In this tutorial, you’ll see how to use both IBM Business Process Manager and IBM Enterprise Content Manager to facilitate transactions with physical contracts via a blockchain network. We’ll use a Letter of Credit transaction to demonstrate how you can coordinate payment for goods, based on contract documents that are stored in a content repository.

A Letter of Credit is a method of payment and an important part of international trade. Both the buyer and seller rely on the security of banks to ensure that payment is received and goods are provided. In a Letter of Credit transaction, the goods are consigned to the order of the issuing bank, meaning that the bank will not release control of the goods until the buyer has either paid or undertaken to pay the bank for the documents. For more background on Letter of Credit documents and blockchain, check out this short video.

When blockchain technology is NOT part of the scenario, as shown in Figure 1, common problems include:

Figure 1. A Letter of Credit transaction without blockchain technology

However, when blockchain technology IS part of the scenario, the common problems are mitigated or removed entirely, as shown in Figure 2. Blockchain introduces timely, accurate process performance. By using a distributed ledger as the underlying system of record, all participants can achieve significant business process improvements.

Figure 2. A Letter of Credit transaction with blockchain technology

Let’s look at the various parties in a network that use a shared ledger for Letter of Credit document transactions. The four participants are: Buyer, Seller, Buyer’s Bank, and Seller’s Bank. Participants retrieve documents and update information on the ledger, and react to events when others submit documents. In this tutorial, we focus on the Buyer’s Bank. The Buyer’s Bank reviews the entire transaction and pays the Seller’s Bank, which pays the Seller (payment authorization through blockchain), as shown in Figure 3.

Figure 3. Participants in the network 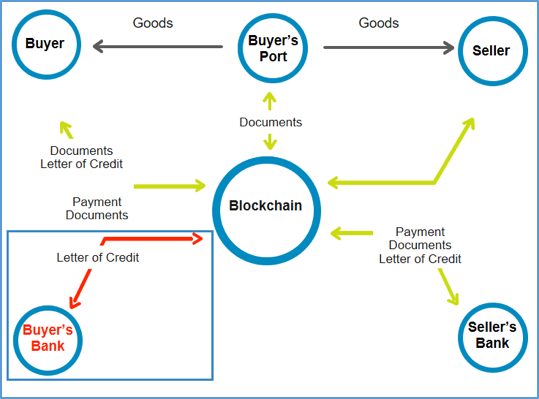 Our scenario focuses on the internal business process of the Buyer’s Bank as it participates in and interacts with a blockchain network. Instead of manually reviewing and verifying the documents, the Buyer’s Bank can use IBM Business Process Manager (IBM BPM) to automate the document verification process. The IBM Operational Decision Manager (IBM ODM) decision service uses the document metadata stored on the blockchain to verify whether the document is valid in the context of the blockchain transaction. If the verification fails, the process assigns a person (a knowledge worker) to perform a manual document review. The document used for this review is retrieved from the IBM Enterprise Content Management (IBM ECM) document store.

Figure 4. How the Buyer’s Bank interacts with the blockchain and IBM ECM to validate the documents 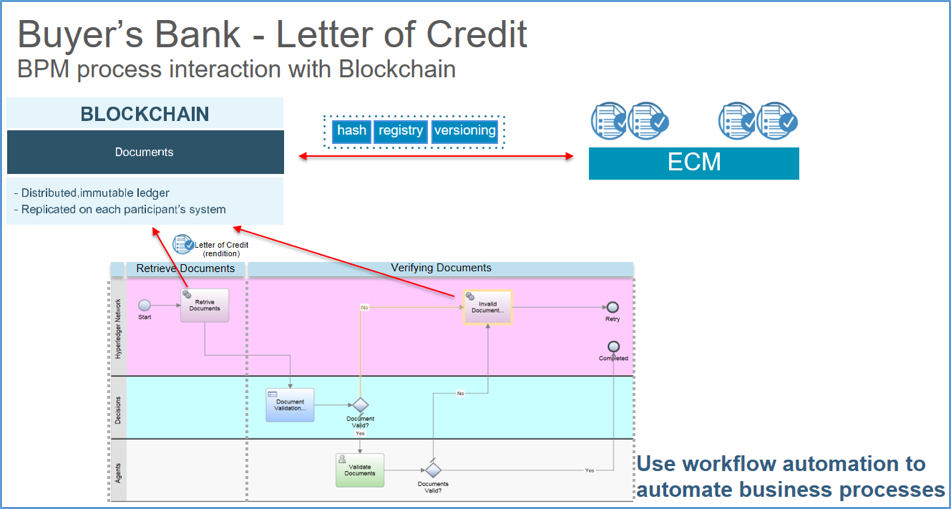 IBM BPM is a business process management platform. It includes tooling and runtimes for process design and execution, along with capabilities for monitoring and optimizing work that is executed within the platform. It enables process owners and business users to engage directly in improving their business processes. 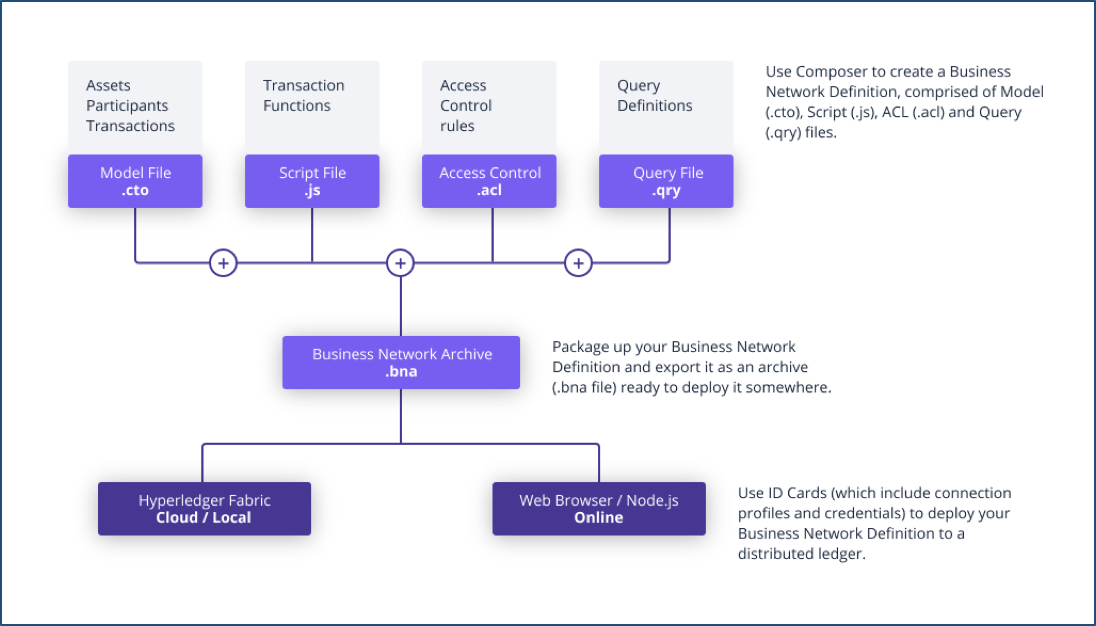 For our Letter of Credit scenario, you can use IBM Blockchain Platform’s developer tools, based on Hyperledger Composer, to create a Business Network Definition, which is packaged in a .bna (Business Network Archive) file. The developer environment allows you to deploy .bna files to a local or cloud-based blockchain network for further development and sharing. Resources in Hyperledger Composer such as assets, participants (actors), and transactions are expressed using the Composer Modeling Language. Participants include Seller, Buyer, Seller’s Bank, and Buyer’s Bank. Assets include trades and documents that are stored or processed as transactions. A sample Letter of Credit data model is shown in Listing 1. 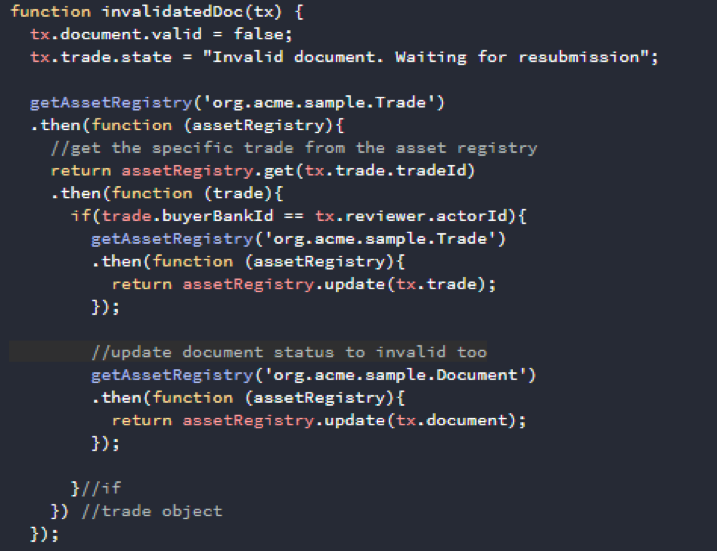 You can generate the REST API after you deploy the business network on Hyperledger Composer.

Finally, you need a swagger definition file to discover the service from IBM BPM. You can download this Letter of Credit Swagger file (letter_of_credit.json) from GitHub. 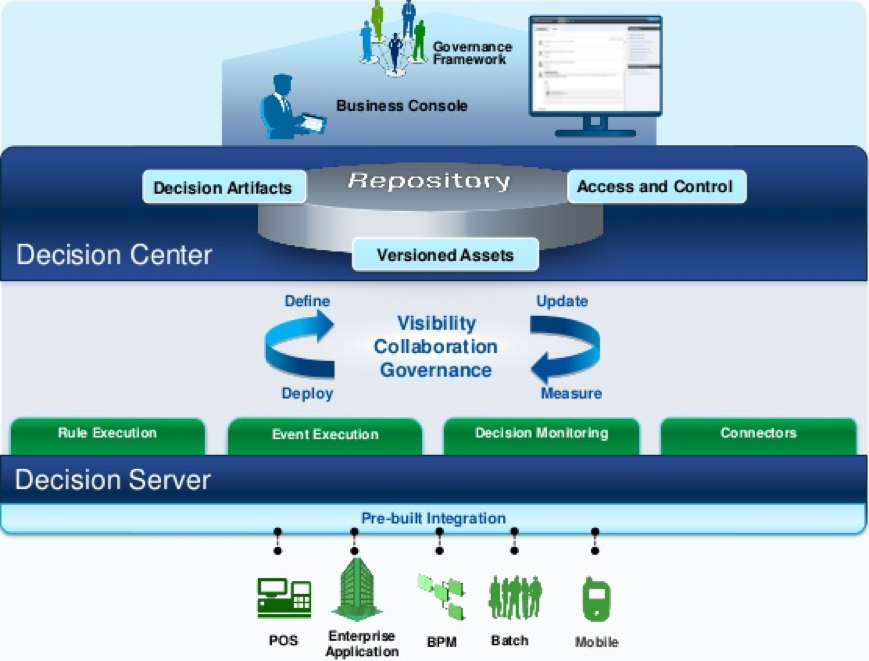 In IBM BPM (shown in Figure 10), the starting service for our scenario is Retrieve Trade Service Flow.

This service essentially retrieves information on the Letter of Credit tradeId, docId, all participants in this trade, and the state in blockchain as shown in Figure 11.

Figure 10. Information to be retrieved

The docId is channeled to Retrieve Document Service Flow. The service flow calls blockchain to retrieve document information based on docId with an information value of Name, Rendition file format, Versioning, URL registry, Hash code, and validity. When the document file value matches correctly, it will channel toward retrieving the content of the document. The activity task is Content Integration Task from the ECM server with an operation of get document content, which returns the content. The content returned from the ECM server is in binary format, so it’s converted to a text string with the script shown in Listing 2:

In this Letter of Credit document example, the sample data are stored in the format shown in Figure 12:

Figure 11. How sample data are stored

The sample script to extract value from the data format is shown in Listing 3:

Listing 3. How sample data are stored

The output content is made available to Validate Document Service Flow. This service flow verifies the metadata code and invokes ODM Decision Service with the business rules (shown previously) to verify the status of the document. If the status verification were invalid, it would flow to Invalid Document Service Flow, which sends a transaction to blockchain with status “Invalidate Document” and the document’s valid status is set to false. If the status verification is valid, it would flow to Validate Letter of Credit Human Service as shown in Figure 13: 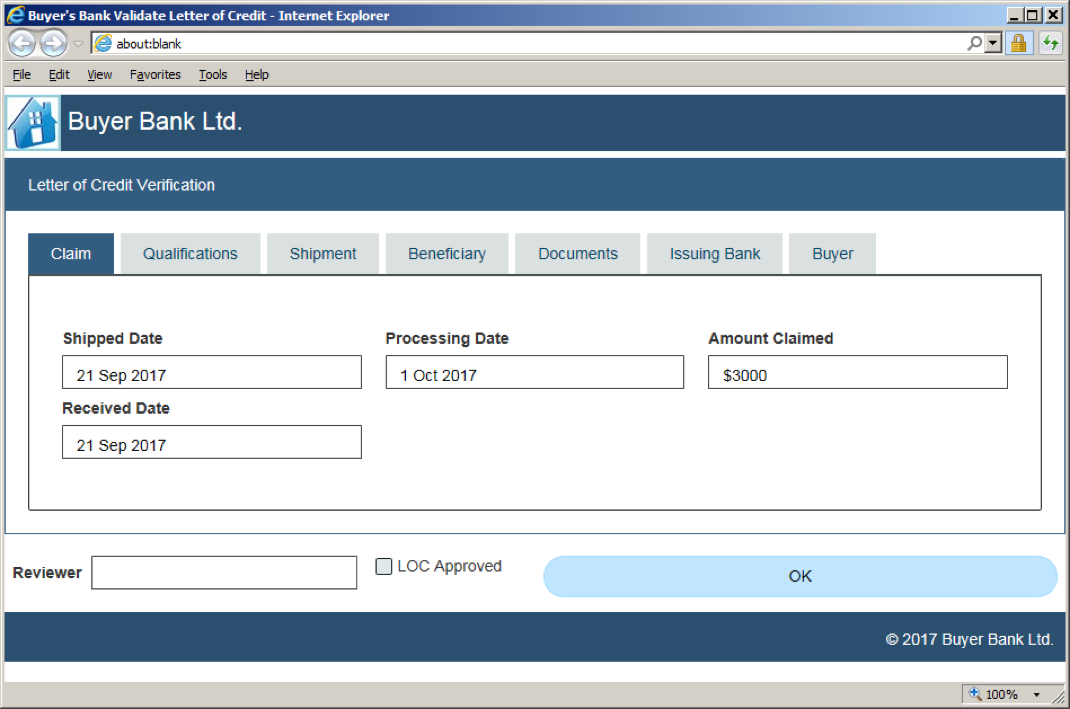 IBM Business Process Manager users can take advantage of the latest blockchain technology seamlessly. You can define and implement your own business processes rules and integrate with blockchain to manage assets. This Letter of Credit scenarioused blockchain to store validity metadata regarding a physical legal contract stored in an enterprise content repository, thus allowing the system to verify that the contract has not been changed or altered.

Ready to start developing your own blockchain use case?

From Startup to Enterprise. Hyperledger and the IBM Blockchain Platform